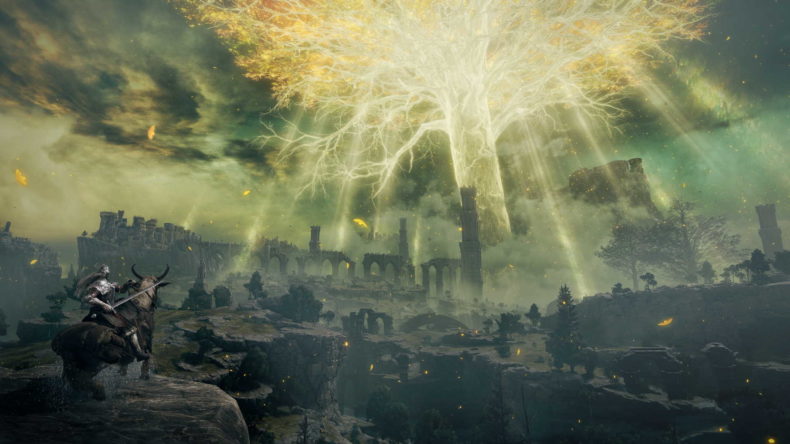 Elden Ring might be something truly special. I know it’s the understatement of the year, but when a game has as much hype building for it as this one does, I want to just get it out of the way. Even with a few months to go, the hours I’ve played of Elden Ring left me desperate to play more, but I forced myself to stop, because I want some of my journey to be fresh when February 2022 rolls around. Seriously, this could be the one.

But let’s not get ahead of ourselves, because I think there’s a fair few people confused as to what Elden Ring is. Then again, there’s probably just as many wondering what it isn’t. I was bordering on cynical before I booted it up. Yes, the traditional excitement and trepidation I always have when booting up a new FromSoftware developed game was there, but I felt like cinematic trailers aside, I didn’t have a great idea of how similar or different to the developer’s previous works it was.

Elden Ring: the UI might be familiar but this is a new game

A presentation from Bandai Namco finally showed me the gameplay, and that didn’t exactly calm my fears, because for the first time I had seen the user interface (UI) and it was Dark Souls. Not “a bit Dark Souls”, no: it was Dark Souls. What the presentation didn’t make clear, and what I ultimately realised after playing the game was that it doesn’t matter. Firstly because the UI fades away when not needed, and second, because Elden Ring feels familiar but also like a true evolution. And hey, actually I have a third reason: because Elden Ring gave me the same feeling The Legend of Zelda: Breath of the Wild did when I first played it. 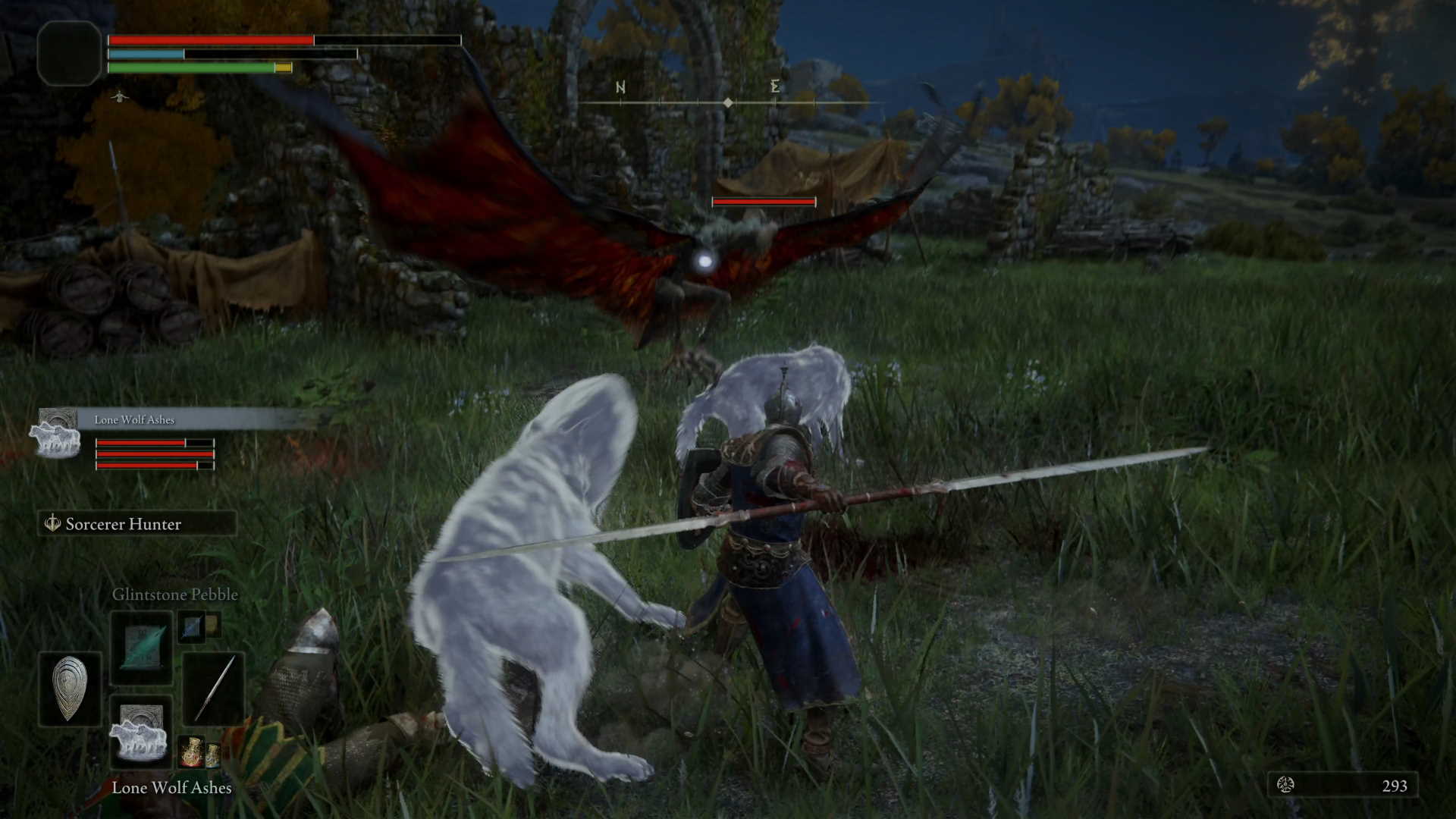 Not the degradation of weapons, and not the happy warm feeling the vibrant visuals and minimalist music gave off, however. No, this was that feeling of being an explorer on an adventure. The feeling of almost being paralysed by possibilities. Where will I go? What will I see? Who will I fight? Elden Ring has all of this in abundance, and to avoid spoiling anything, I’m merely addressing the first few hours alone in saying that.

There does appear to be a critical path to “mainline” the story. Sites of Grace replace bonfires as locations to respawn some enemies, level up, learn magic, play with your inventory, etc, but they also offer a fleeting glimpse at where you should head, if you fancy following the story. Glowing golden artifacts pierce through the rain tempting you in a direction you’ve yet to travel. But given that I wasn’t going to be able to keep my progress between now and February, I was far more interested in the things I’d find off the beaten path. 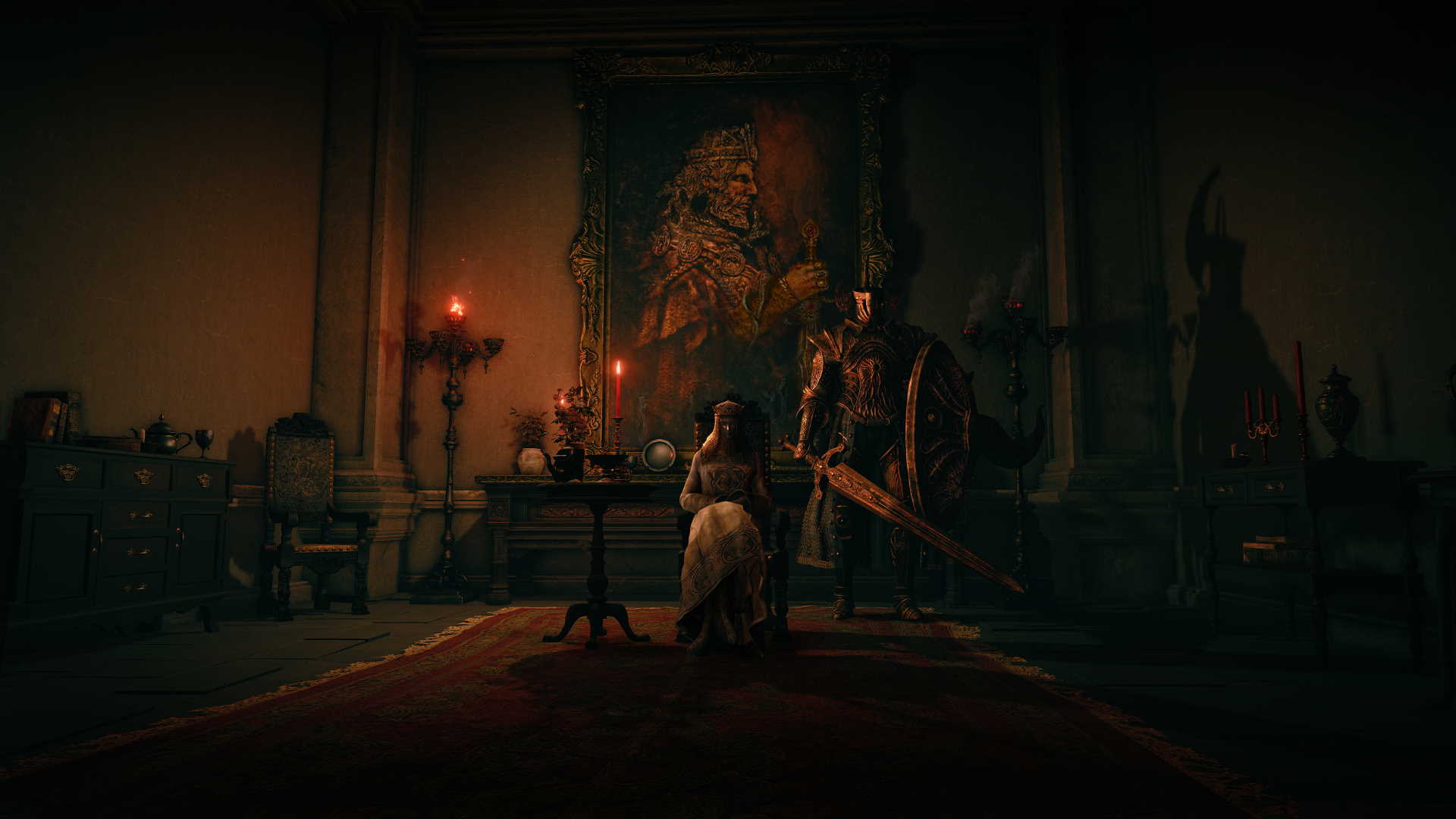 I lost count of how many optional boss battles I encountered in the first 2-3 hours. It seems like every nook and cranny has a dungeon or explorable area of some kind, culminating in a named health bar appearing and you failing at first try. Standard enemies that I couldn’t lay a glove on litter the beaches and mountains. And seriously, the variety on show here is impressive. From ghostly skeletons that get knocked down only to get back up, to monstrous storm giants that are lethal when first met. There’s soldiers and their pet wolves, and impish underground enemies that team up on you and hide in the dark caves.

All of this is perforated by that “Souls” combat, too. It feels so damn good, as you’d expect. Magic feels more viable than ever, but also feels massively built upon. The jump button means you can launch into the air and attack with a crushing blow. A few of these will destroy your enemy’s guard leaving them open to attacks. The ability to find scrolls that can summon ghostly friends allows you to break that guard and let them do the damage, be they a Nordic looking gentleman, or a pack of three wolves. I tell you now, I got genuinely angry when one of the soldiers killed a single one of my friends: he paid in blood for that crime. 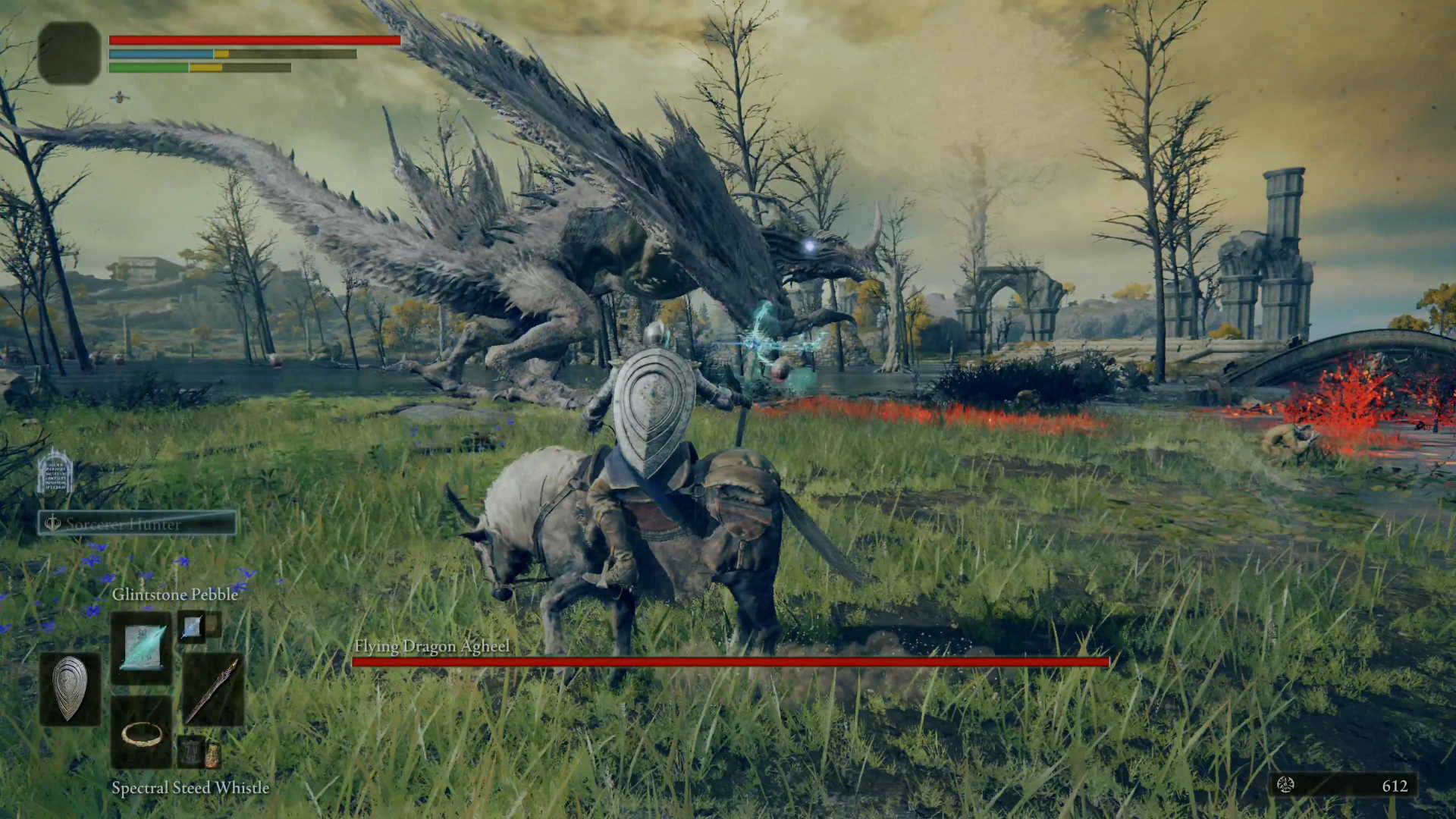 I’m barely scratching the surface. There’s horseback combat, stealth, gusts of wind that can launch Torrent (your horse) up into the air. The combat is refined in a way I truly appreciate, even convincing me to give magic a go despite being a devout sword and board guy prior to Elden Ring.

Crucially, it’s still bloody hard. Having a horse means you can run from trouble in the outside areas. But a change to how stamina works means you only consume it when in the heat of battle. In other words, if you see an enemy and aggro it, you have a chance to get away without having to burn the stamina bar. Every change made feels smart and calculated in order to make Elden Ring feel familiar, yet vastly different, and a new challenge for fans to master. 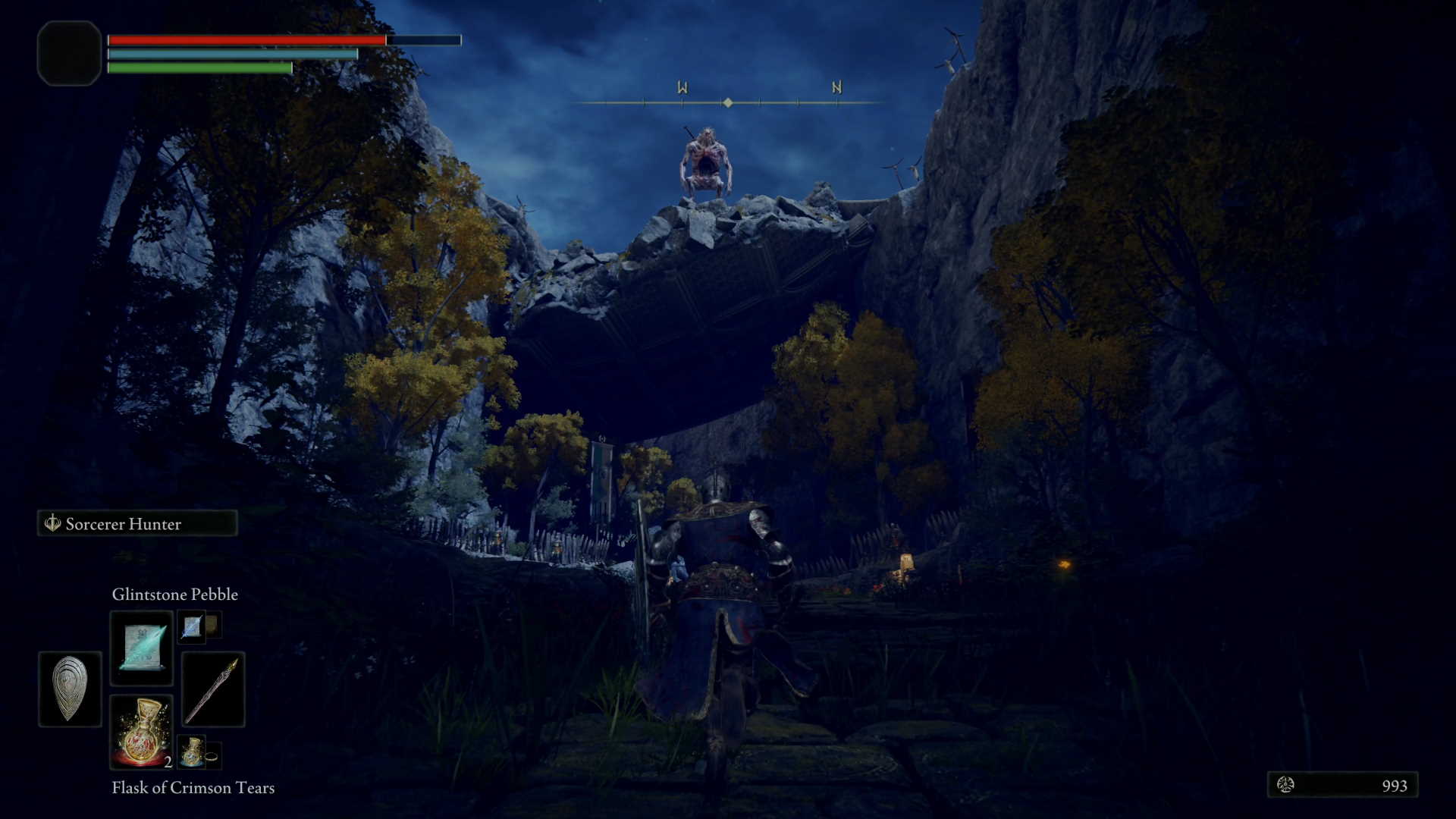 It’s not an Estus Flask any more, either, but it also IS an Estus Flask – you get me? You can choose the mix of healing or magic flasks you have. You can also craft in the field once you’ve met the merchant who sells the crafting pouch. Oh, and did I mention you can pick up random fruits, flowers, and even gold-covered excrement, all to craft with? This is more RPG than a Souls-game has ever been before.

But I swear, despite this not even being a full game, I’m forgetting things I wanted to tell you. I feel feverish writing this, scared to overhype it and yet also that I might somehow not do it justice. I went in with more cynicism than most, expecting “more Souls”. Instead, I am now left trying to find a way to forget about this game for a few months. Because while three months may not seem a long time to most, to me it now feels like an eternity. This will be one of the best games of 2022. If not, I’ll buy and eat a hat.