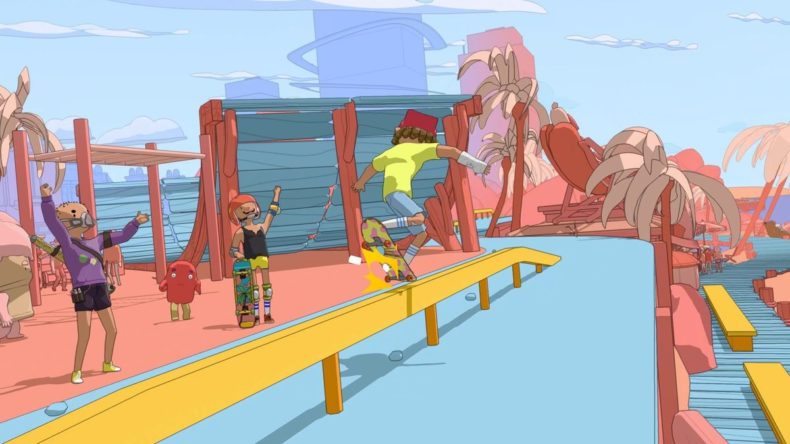 In OlliOlli World, players get to skate through a colourful world called Radlandia. Firstly, there’re tons of customisation options, including plenty of body types, skin tones, and hair. Secondly, there’s also lots of tricks, poses, and apparel for even more unique styles.As players search for the mythical skate gods on a quest for Gnarvana, they’ll experience Roll7’s signature flow-state gameplay.

The game will feature two multiplayer modes: Gnarvana League and Gnavarna Portal. The Gnarvana League intends to provide a big challenge, pitting players against others with similar skill levels. Players will advance through the ranks to get new items. The Gnarvana Portal allows players to generate levels based on certain parameters such as style, difficulty, and length. Each creation has a virtual postcode to be shared with anyone around the world. After all, you’ll want to share your sick courses with the world, right?

“In OlliOlli World, you should expect loads of seriously wacky locations to explore and rad new characters to meet,” said John Ribbins, Creative Director of Roll7. “OlliOlli World is a love letter to the bizarre and magnificent aspects of skateboarding culture. It embraces the weird and wonderful aspects of this street phenomenon and encourages you to express yourself freely.”

You can watch the brand new trailer below:

Video games are cool. Don't let anybody tell you any different.
MORE LIKE THIS
private divisionRoll7