previous
Uncharted: Legacy of Thieves Collection coming to PS5 in January
random
next
Halo Infinite | How to defeat Escharum
0 comments 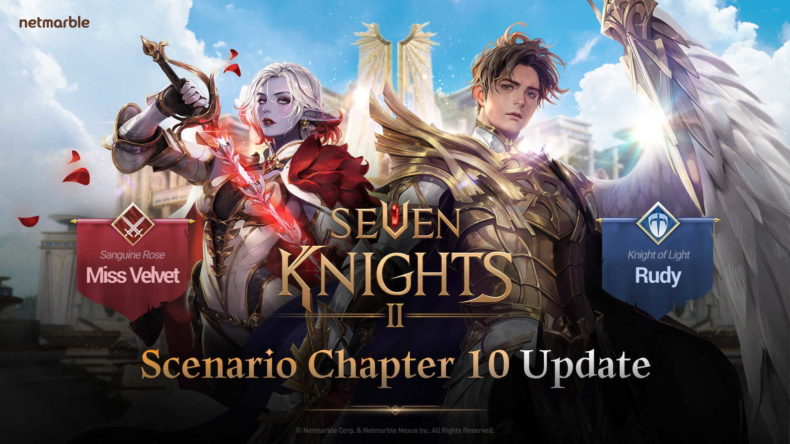 Netmarble’s open-world mobile RPG, Seven Knights 2, is set to make the game ever bigger by adding Chapter 10 to the game’s story. This is going to mean it has more story content, but also more heroes.

Chapter 10 will focus on Rudy’s adventure to receive the Oracle of Light, and also the unfinished story of the Daybreak Mercenaries. On top of that, there is more than just chapter 10 being added, and Netmarble tells us that Seven Knights 2 will be expanded with the following:

Players now also have the chance to acquire two newly added heroes, Legendary+ Knight of Light Rudy and Legendary Sanguine Rose Miss Velvet. Knight of Light Rudy is a defensive hero and arrives in his original Seven Knights form with even stronger skill compositions, such as Damage Reflection and Taunt. He is also the first Legendary+ hero to be added since the launch of Seven Knights 2. The second Legendary Hero from Karaestelle – Sanguine Rose Miss Velvet – is a strong offensive hero that players can easily utilize within Seven Knights 2’s Arena mode.

Seven Knights 2 takes place 20 years after the original Seven Knights, and centers on the Daybreak Mercenaries who embark on a journey to find the last member of the Seven Knights “Rudy,” after a series of events involving a mysterious girl named Phiné. Starring an array of characters depicted with stunning graphics powered by Unreal Engine 4, Seven Knights 2 will immerse players in a true sequel featuring the fun and innovative gameplay of Seven Knights enjoyed by players around the world. Players can collect and develop charismatic heroes while engaging in a deep and immersive cinematic story.

ChronoBlade gets ready for global debut