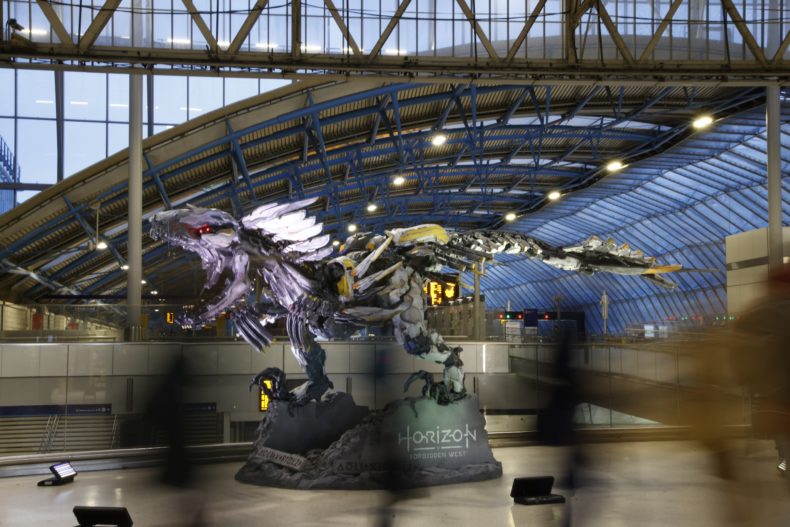 To celebrate Forbidden West’s launch, a Horizon Clawstrider has invaded Waterloo Station. Londoners can check out the 3.5 metre tall beast on their commute now, but you’ve only got until the 24th before it wanders off and causes mayhem.

I think it’s fair to say that Horizon Forbidden West has had a successful launch, with plenty of praise from fans and critics alike. I can’t wait to play it myself, especially after reading our own Chris White’s review.

“Horizon Forbidden West is an enormous title that is filled to the brim with exciting missions and content. Combat consistently evolves, and the range of weapons and gear is staggering. The story is consistently engaging, and the characters are well-realised and thoroughly interesting. Aloy’s adventure is by far one of the most thrilling of this generation so far. She continues to be one of PlayStation’s most-beloved characters. Machines are perhaps the greatest part of the entire adventure. It’s fun to fight them, but also to watch them exist. They feel real. They feel alive. As much as I enjoyed taking them down, I found it highly satisfying to live among them.

I’ve not seen a game look this spectacular before. From the various biomes and how their ecosystems work, to the vibrancy of the world and how NPCs all go about their daily lives, Horizon Forbidden West is another blockbuster. Bigger than the original in every way, I honestly can’t fault the stunning work Guerrilla Games has done in bringing the next chapter in Aloy’s story to the PlayStation 5. There isn’t a doubt in my mind it’ll be discussed in great detail come end of year discussions for GOTY. All that’s left for me to say is make sure you put time aside to play one of the greatest single player games of all time.”