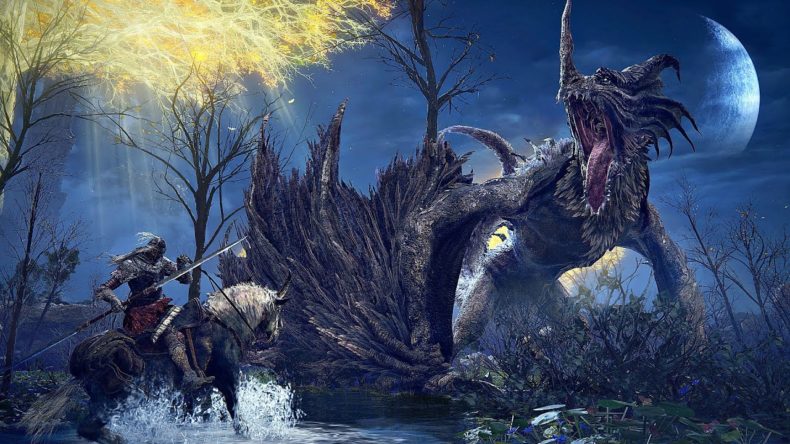 Elden Ring builds and expands upon a lot of elements of FromSoftware’s previous titles, not least the bosses. There are so many optional boss fights in the Lands Between, and they’re all worth taking on. Of course, some are much harder than others, while some seem designed purely to intimidate. Take, for example, Flying Dragon Agheel.

This imposing beast first appears as you gallop across Lake Agheel, slamming into the ground like a comet to obliterate its own worshippers. Immediately it looks terrifying, and most will either run from it or die in the first attempt to defeat it. But it’s actually not that tough if you know how to beat it, and luckily we do. 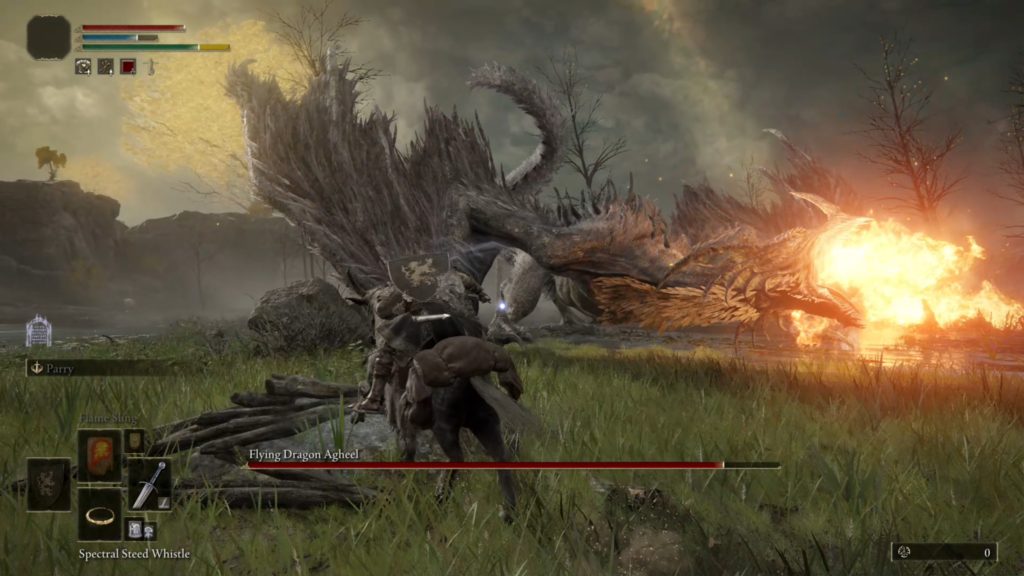 Where is Flying Dragon Agheel?

Agheel is the apex predator of his domain, and can be located on Lake Agheel. Once he appears the first time, he will stay in that spot until defeated, occasionally patrolling the lake but never moving far.

He’s very easy to reach, and even if you’re defeated, the gallop back from the nearby Site of Grace is quick and unimpeded by other enemies. Well, there are some giant crabs, but you can ride right by them.

Can I summon help for Flying Dragon Agheel?

Yes, you can, but only from your collection of Spirit Ashes. We would advise not doing this though. Nothing you can summon in the early game is worth it, and you really want his focus on you the entire time. 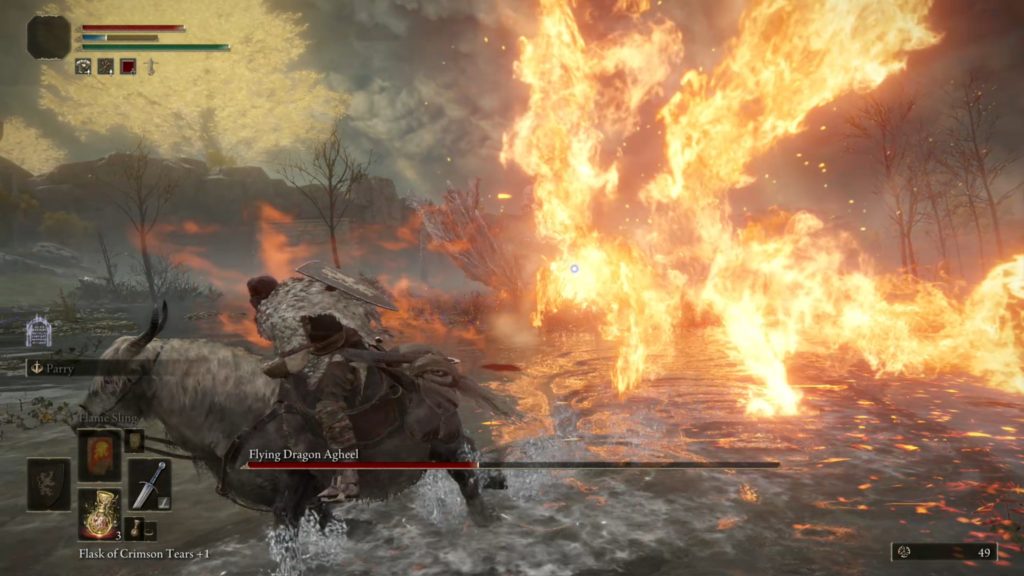 What to watch out for

If you mount Torrent and give Agheel a wide birth, you can get in and do a few hits of damage to kick off the fight. Do not try to take him on in a straight melee, as he will one-shot you with most attacks. If you’re a ranged build or a magic user, you could try to strafe around him in circles. The problem with this is his health pool is massive, and you’ll need a lot of Cerulean Flasks or ammunition to succeed this way.

Instead, position yourself in front of him and allow him to make the first move. He has several attacks which he mixes up so it’s hard to predict which will follo which – but they all have long wind-ups. His primary attacks are long breaths of fire that he will sweep the lake with, an aerial ground slam that will one-shot you, an aerial breath of fire with a huge area of effect, and a roaring charge culminating in a sweep of his great scaled head. If you get too close to either side, front or back, he will side-swipe you, bite you, or whip you with his tail. 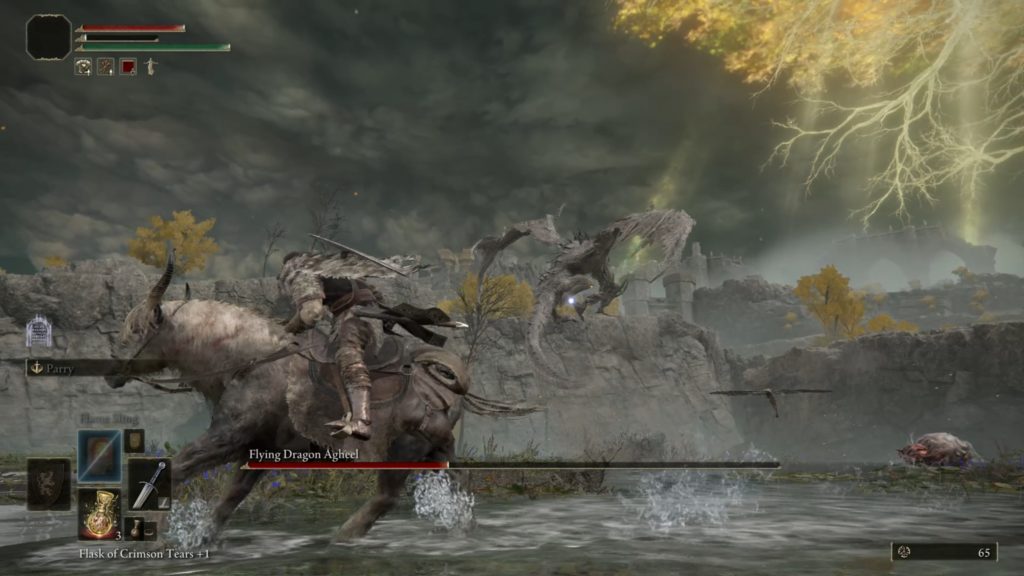 How to defeat the dragon

This is a battle of atrition and as such requires patience. The primary tactic we used was to stay at a mid distance, just within reach of his flame breath. As soon as you see his mouth fill with fire, push Torrent into a gallop and charge towards him and to the left. Do not go right, as Flying Dragon Agheel almost always begins his flame breath on his left side. If you time it right, youll be able to hit either his wing or his back foot around 3 to 4 times.

You won’t do a great deal of damage so be prepared for a long fight. If Agheel roars, get some distance, as he’s going to charge you. Likewise, if he takes flight, disengage your target lock and ride like hell, coming around in a wide arc to face him. His ground slam is incredibly fast, powerful, and uncannily accurate – avoid this move at all costs. His breath of fire will burn a large area of the ground, but is relatively easy to avoid. 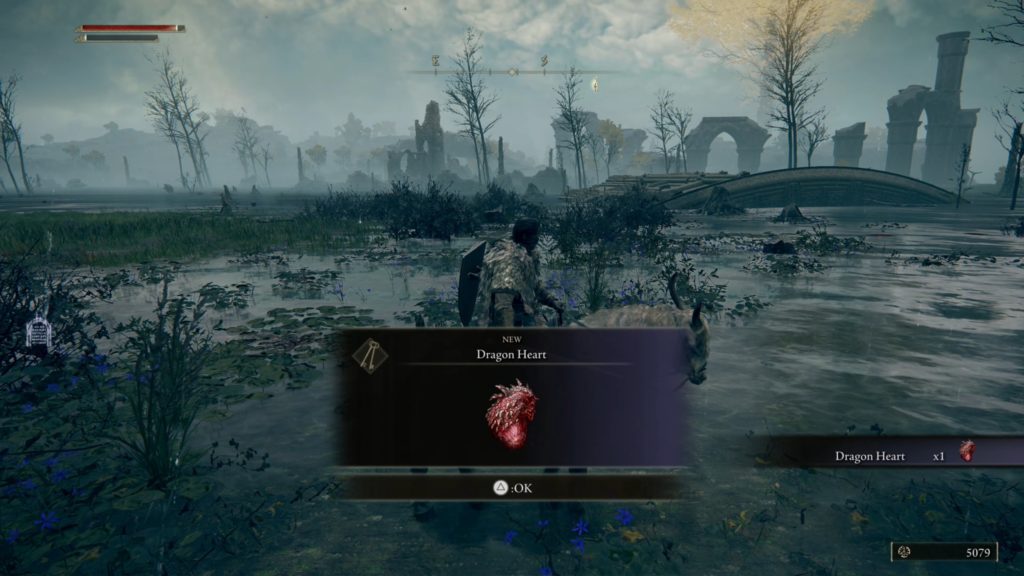 Now and then he will jump up onto one of the structures, or try to climb the nearby cliff in an adorable impression of a puppy getting on a sofa. Stay back for the former, but punish him with ranged attacks (if you can) during the latter. If at any time you misjudge the primary fire breath, turn tail and run. It has incredible range, and a direct hit will kill you or Torrent in seconds. Use hit and run tactics, keep your patience, and don’t get greedy. His close-range attacks are fast and will stagger you or knock you off Torrent.

Unlike in previous From Software games, you won’t get anything for cutting off Flying Dragon Agheel’s tail. Don’t waste time trying to hit it, as he’ll just punish you. When you defeat him you’ll be awarded a few thousand Runes, and a Dragon Heart. Faith-using characters can take this to the Altar of Dragon Communion and claim one of three incredibly powerful incantations.

Senior Content Editor Mick has been playing games for over 30 years and writing about them for around 12. After drifting from site to site for a while, settling briefly at the now-defunct Made2Game and freelancing for the gone-but-not-forgotten NintendoGamer Magazine, he came at last to rest at Godisageek. Mick has been a reviewer, staff writer and content editor here for some time, while also moonlighting a little for Red Bull Games. He has 4 kids, has written 2 novels, and sometimes even manages to pay a bill or two. You'll usually find him defending the galaxy in Destiny 2, battling evil in Diablo 3, or lurking in the background on Twitter. Find him there @Jedi_Beats_Tank, or on XBL (JediWaster247), PSN (Jedi_Waster) or Nintendo (JediWaster).
MORE LIKE THIS
Bandai Namcoboss guideElden Ringfrom software