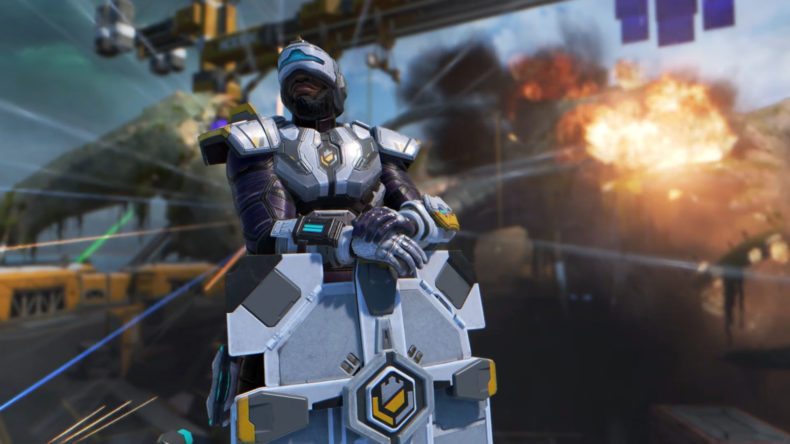 As the Legends prepare to get back into the action, there are big changes coming to the tropical island of Storm Point, and with them comes a twist. You might have seen in the recent trailer, but as Bangalore and Newcastle drop down into the battlefield together, a rumbling in the ground begins. A structure that we now know as an “IMC Armoury” rises from underneath the ground and a Sea monster dashes toward land spelling immediate danger. Just as when this tropical island was first teased, it still showcases the immediate dangers of this false promised land.

However, there is truly lots to unpack with the Apex Legends: Saviours update,  so let’s start with the new legend, Newcastle. Although he is new to the battle in the Apex world, he is known in the universe of this Battle Royale. We know him as Jackson, or Bangalore’s brother. 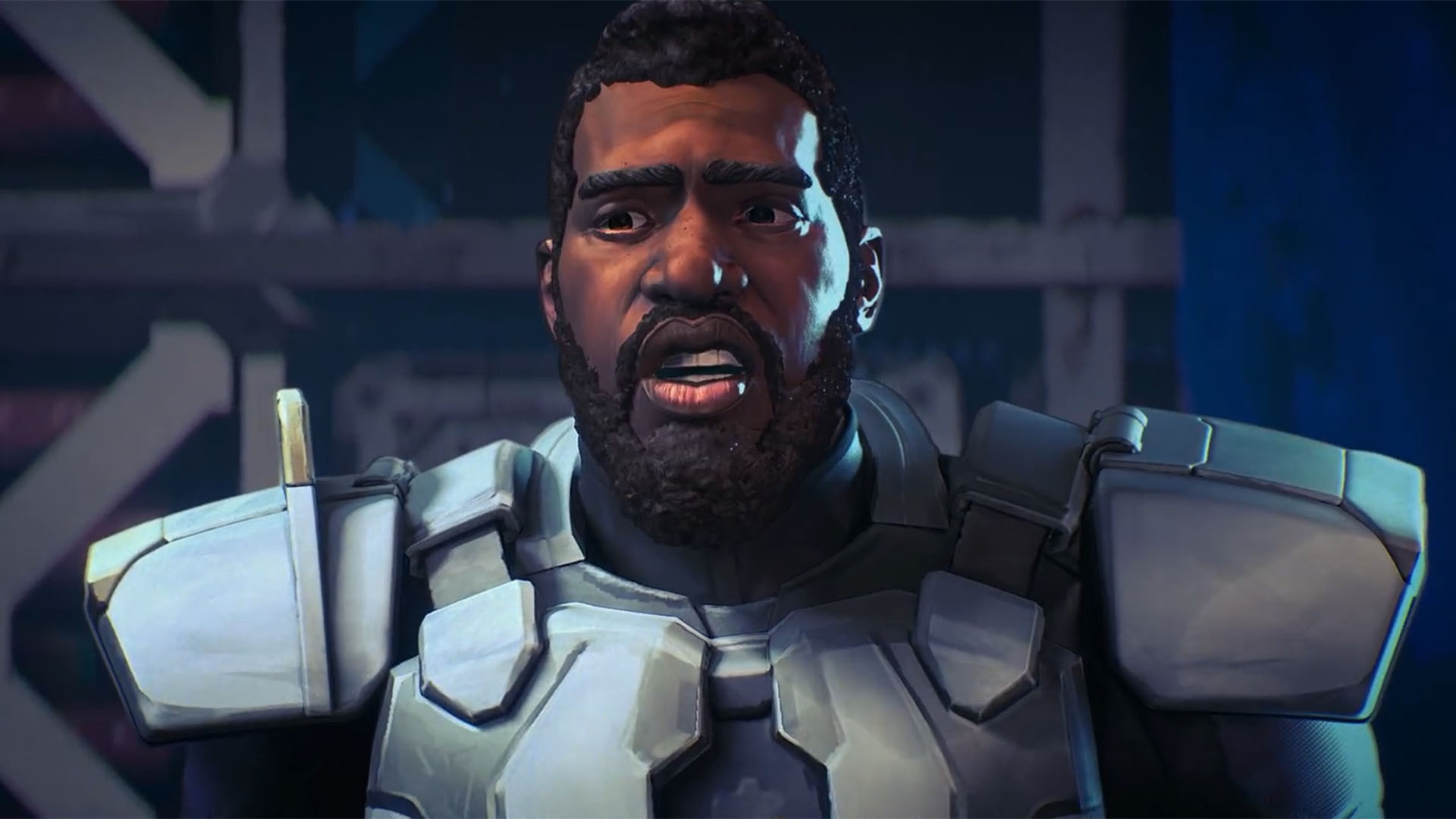 He joins the Apex Legends world in Season 13 with a backstory of leading a double life and being known as a protector, and he has some cool abilities, too. His abilities are all about the protection of his squad and survivability. Retrieve the wounded, for example, is Newcastle’s passive which enables him to pull teammates who are downed into a safer space behind a barrier, which no other character within apex can do. The shield that protects Newcastle and his downed friend is called the Mobile shield and its strength is based on the knockdown shield that he has. So as your knockdown shield may improve through finding better loot, so will Newcastle’s shield strength within his passive.

Newcastle’s tactical ability is a throwable shield that protects you from all incoming damage, similar to Gibraltar’s bubble shield. However, one big difference between the two is that unlike Gibraltar’s bubble, Newcastle’s throwable shield can be broken by enemies. In addition to this, Newcastle’s shield can also be redirected while out so you can manoeuvre around the enemy’s fire. It can deflect Mad Maggie’s Wrecking Ball and at the preview showcase we attended, it was hinted that it can also deflect other projectiles. However, things like Mad Maggie’s riot drill are direct counters to Newcastle throwable shield. 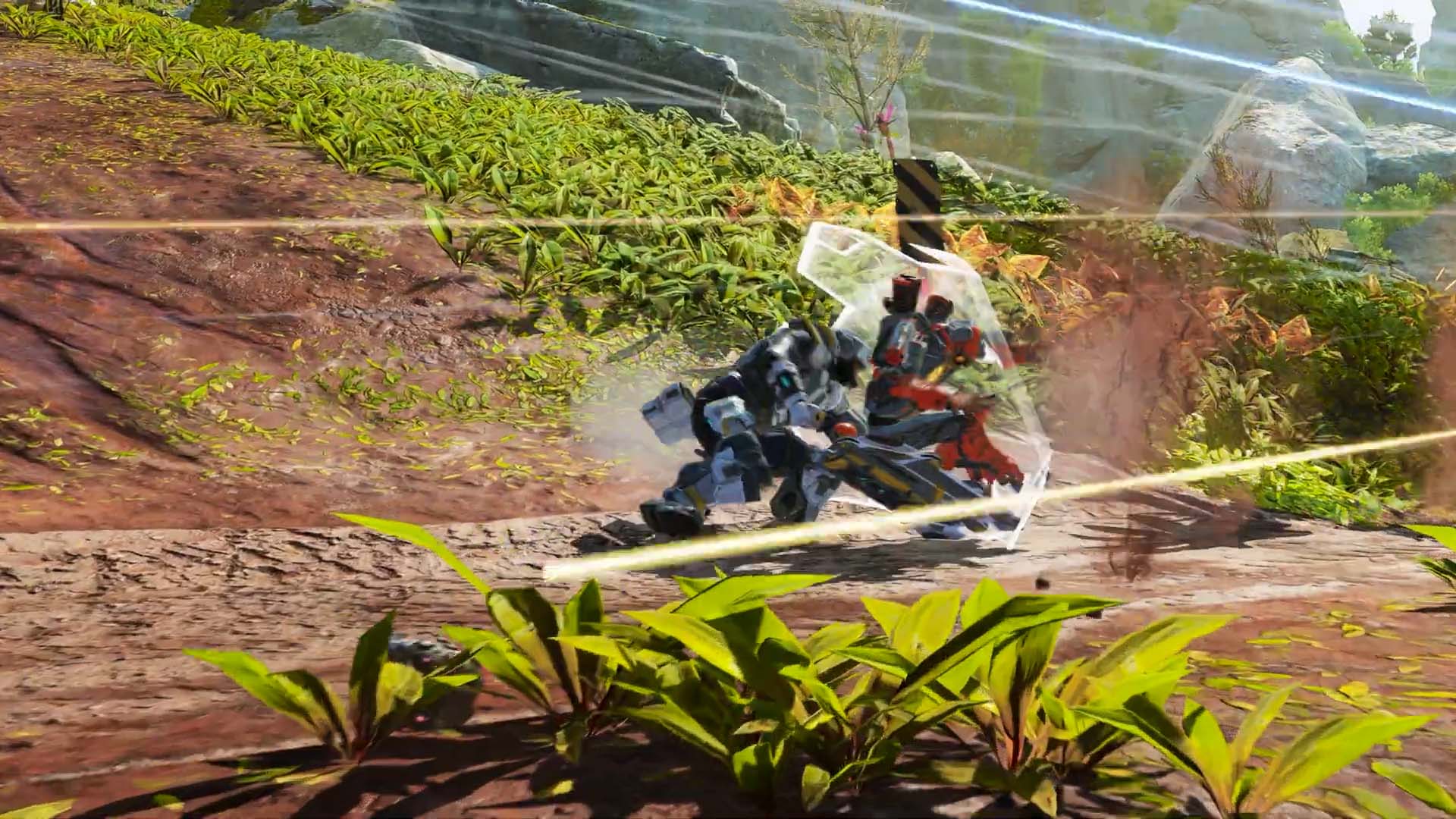 His ultimate is called the “Castle Wall” and is a giant deployable wall which can help to hold space and gain a cover advantage in any fight. As it is used, Newcastle leaps into action slamming the wall down onto the battlefield. You can target teammates with his ultimate and leap even further to help a teammate who may have been caught out in a 2v1 situation. Upon deployment it knocks back enemies and gives them a slowing effect which may allow for kills to be cleaned up as they cannot escape as quickly as usual. It does not deal any damage though, so don’t expect to get some kills crushing someone with a giant wall.

Now moving on to changes that have been made to Storm Point. The giant sea creature that dashed into action upon the descent of our heroes is laid across the beaches and is now an added point of interest on the map bringing the total number of named locations to 18 (from 17). The beast has loot within it, the best loot being inside the belly of the beast, quite literally. The best loot is deep inside the monster which you can fully explore. Yes, that means go inside, on top of, you name it: you can probably do it. 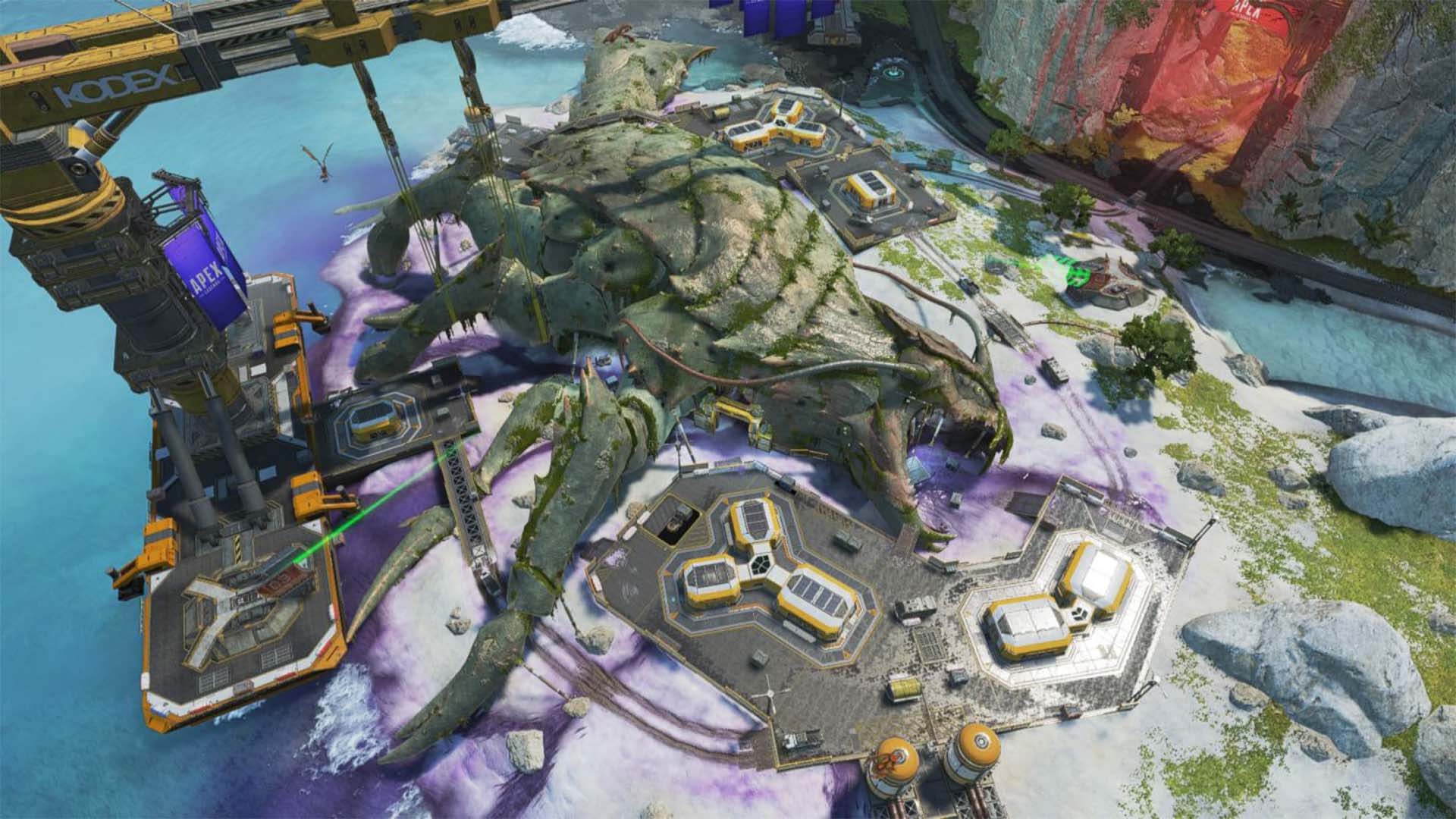 Another new feature of the tropical island is the new IMC Armouries that have been brought to surface. These armouries are like a minigame with waves of enemies coming at you for 60 seconds. The amount of waves you go through directly correlates to the quality of loot you attain for attempting the challenge. The type of loot you get isn’t random though, with a new type of bin being introduced; Smart loot bins. They scan your weapons and give loot based on what you may need to improve your loadout.

The bins may also give upgraded versions of your weapons which makes them a very good tool for the start of the game with a chance to give you an immediate weapon advantage among other players who may have dropped near to you. What’s more is that you cannot be third-partied whilst attempting to clear out an IMC Armory due to the ramp to the entrance of the building closing after meaning that there is no way to shoot players taking part in the challenge. 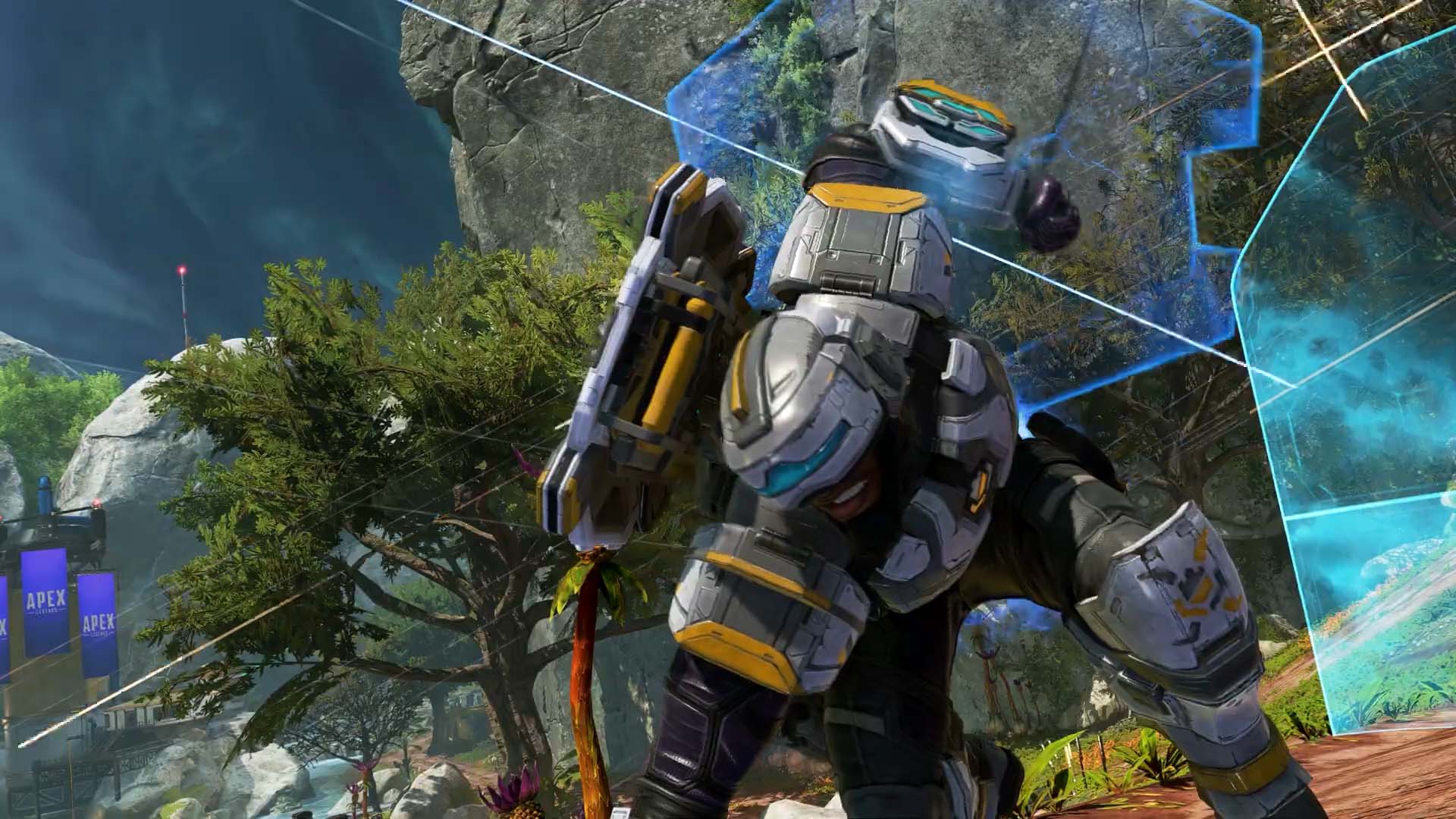 During the presentation it was also revealed that Apex Legends Mobile is coming sometime in May. The mobile build is starting with ten Legends with some favourites such as Wraith and Octane. Apex Legends Mobile will have separate content from the PC and Console version of the game, with some of the original maps making it a nice introduction to newer players and a throwback to the playerbase who played when the game was first released.

Overall, Apex Legends: Saviors, is looking very fresh and interesting bringing a new point of interest to the map which will be sure to be a hot drop spot and the everchanging map design does show the dedication of the team behind Apex Legends. The diversity of the roster of Apex Legends continues to grow, with Newcastle looking like he could contend for a place in the meta. This new season is looking very promising.

Apex Legends “Saviors” is set to launch on all platforms on May 10th.