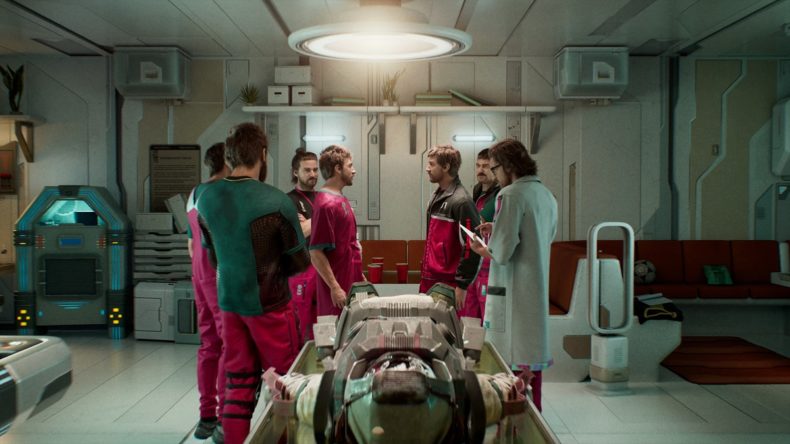 During the PC Gaming Show, 11 bit studios revealed its newest IP, The Alters, with a trippy and mysterious cinematic trailer. It comes from the studio that made This War of Mine and Frostpunk, and is said to be “forged in the spirit of meaningful entertainment.”

Although much of the story wasn’t revealed in the trailer, it features a man called Jan Dolski who wakes up to find different versions of himself surrounding a dead body that also looks suspiciously like him. As the trailer ends, it shows a huge circular space ship with hundreds of containers inside of it, traversing across an unknown planet.

Some information was released regarding the new IP The Alters. It’s about how life could have been different depending on the decisions you could have made, and how personalities or ways of thinking would change had a new path through life had been taken. Jan Dolski is a worker facing circumstances that’ll lead him to a life-changing crossroads. After crash landing on a distant planet on his own, Jan is thrust into a life and death situation. It sounds interesting, and something Game Director Tomasz Kisilewicz was able to build upon.

“These are not clones. They are the alters. Alternative versions of the same person,” said Kisilewicz. “Each alter has a different skill set necessary to achieve success, but players have to take care of every one of them. And each one of them has a unique personality resulting from their unique life path. How those life paths go and how those relationships are built – it’s entirely up to you as a player”.

The Alters will allow players to investigate a compelling and relatable topic through its science fiction setting, made by many of the creators of This War is Mine, and has been in development for almost three years. You can watch the trailer below:

Video games are cool. Don't let anybody tell you any different.
MORE LIKE THIS
11 Bit StudiosPC Gaming Show