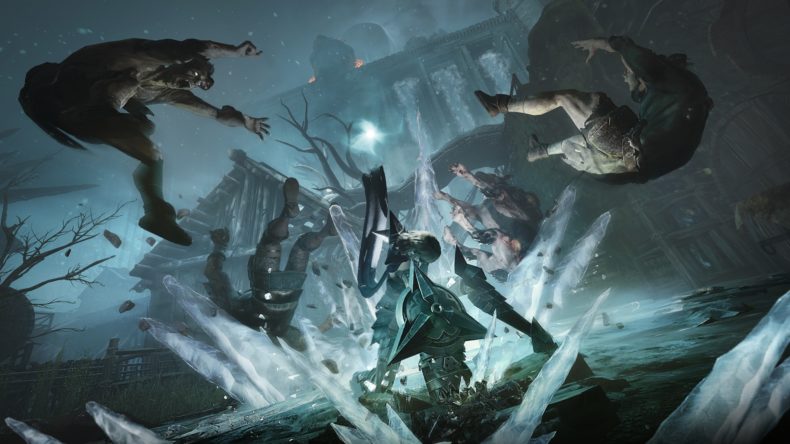 The first thing I had to ask after watching the hands-off demonstration of Reply Game Studios’ Soulstice was whether or not it was a Soulslike. The name had me thinking it was, and the gameplay could certainly fit the bill. In actual fact, though, it isn’t. Soulstice is a character action game in the vein of Devil May Cry or Bayonetta, featuring frenetic combat emphasising combos and body-juggling. This alone makes it almost refreshing – as does the fact that it’s a single-player game with no multiplayer or online features at all.

Almost everything these days has some element of roguelite skullduggery or Soulsike masochism, and it’s nice to be able to play something a little more straightforward. Despite the dark fantasy setting and the gothic aesthetic, Soulstice is a game about smacking things in the face with a broadsword until you can proceed to the next area with nary a lantern or bonfire in sight. 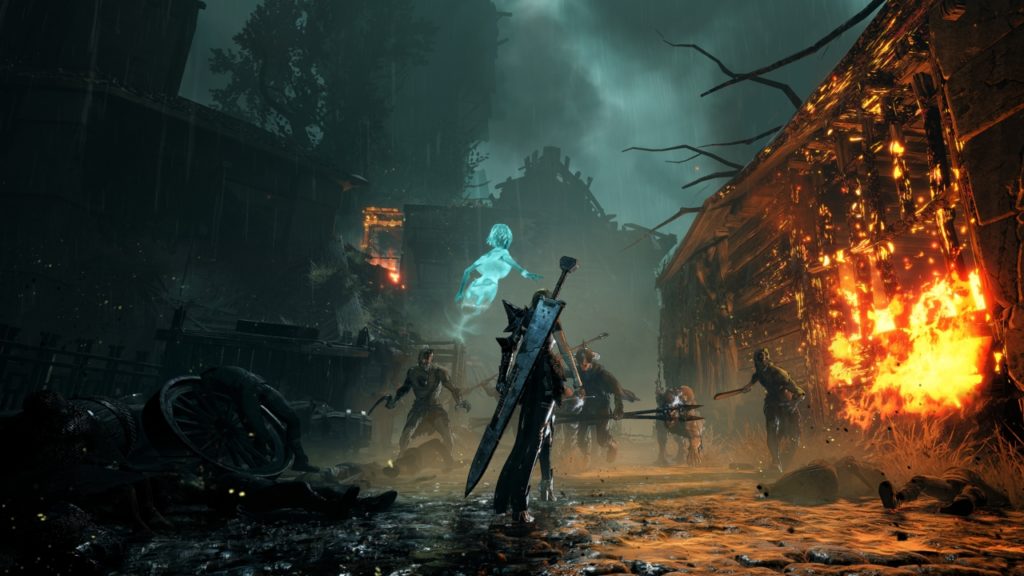 Actually there are lots of bonfires. Lots of fires in general, in the portion I played after the demonstration was over. In it, protagonist Briar and her disembodied sister, Lute, assault a citadel under siege in a bloody, brutal section characterised by fast combat, light platforming, and some interesting level design.

Briar is an Ashen Knight, and a Chimera. In the world of Soulstice a Chimera is a warrior fused with the soul of a deceased sibling, who can bolster their powers with magic, deflect incoming attacks, and offer support and guidance throughout their vital missions. In practice this allows you to juggle enemies using Briar’s ridiculously huge sword, swinging chain or brutal hammer while Lute parries attacks and shouts out where enemies are coming from.

Initial impressions are favourable, too. Combat feels impactful, the dodge is immediate and Briar swings her sword with genuine rage, smashing enemies into little globs of armour-clad offal. Creative Director Fabio Pagetti cited the anime properties Berserk and Claymore as inspirations, along with Final Fantasy. It shows too, although Soulstice still has its own visual style. There’s a cel-shaded look to the character models that fits in well with the dark world, creating a comic-book aesthetic that really sells the atmosphere. 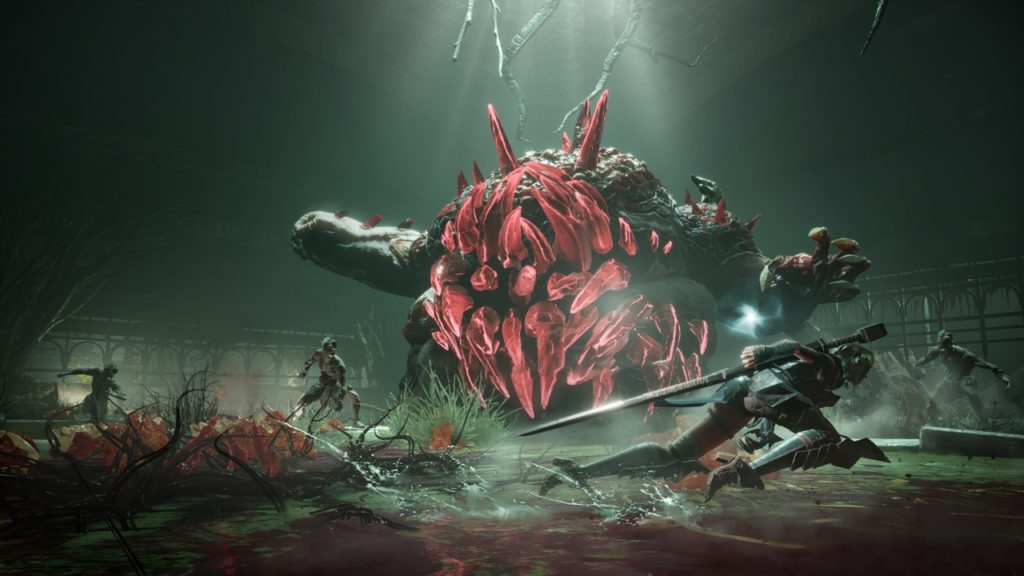 Smashing barrels and enemies grants red orbs that fuel Briar’s skill tree, while you’ll need to use Lute’s ghostly powers to find blue orbs for her. XP is spent, oddly, at a merchant you kind of lust find standing around the level. It makes no sense in context – that a powerful mystical knight should “buy” abilities from a random salesman mid-mission smacks hard of “this is a game”, but it is what it is.

Either way there are two skill trees. Briar’s is short and focuses purely on her weapon abilities, adding new combos and skills to her arsenal. Lute’s is huge, and allows you to build on Briar’s intrinsic and passive abilities, such as defence. It’s an interesting system, since the characters act as a gestalt entity and rely entirely on one another to survive.

As the mission begins, we learn that Briar is “corrupted” and fights against the effects of this corruption, which could be lethal to Lute if she loses control. Initially we’re not told what this means, but it hints at some interesting story elements going forward – especially as there are other Ashen Knights in the world. 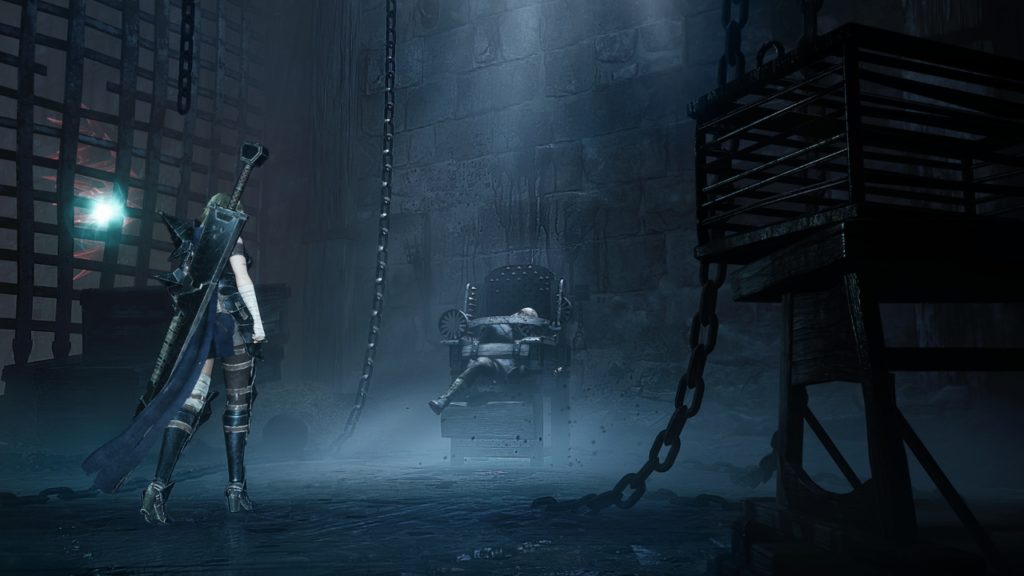 At present, the frantic combat is let down a little by spotty performance. I thought it might be my CPU, but adjusting graphical settings made no difference. It desperately needs an option to turn off motion blur, though, as it became a little tricky to follow the action at times. The combat itself is pretty straightforward, mixing standard sword attacks with a secondary weapon such as the aforementioned chain, a massive hammer, and crossbow. Parrying is taken care of when an icon flashes up and Lute intervenes, blocking enemy missiles and incoming blows.

If Reply Games can stay the course with Soulstice, and deliver a tight narrative that doesn’t out-stay its welcome, there’s potential here for an entertaining fantasy story in a unique and dangerous new world. Elements reminded me of Nier, from the general look and feel to the atmosphere of the world, and that’s no bad thing. I would expect to see some work done on the performance side between now and the September release date, but other than that what I’ve seen and played more than has my attention.

Soulstice is coming to PlayStation 5, Xbox Series X|S, and PC on September 20th.

Senior Content Editor Mick has been playing games for over 30 years and writing about them for around 12. After drifting from site to site for a while, settling briefly at the now-defunct Made2Game and freelancing for the gone-but-not-forgotten NintendoGamer Magazine, he came at last to rest at Godisageek. Mick has been a reviewer, staff writer and content editor here for some time, while also moonlighting a little for Red Bull Games. He has 4 kids, has written 2 novels, and sometimes even manages to pay a bill or two. You'll usually find him defending the galaxy in Destiny 2, battling evil in Diablo 3, or lurking in the background on Twitter. Find him there @Jedi_Beats_Tank, or on XBL (JediWaster247), PSN (Jedi_Waster) or Nintendo (JediWaster).
MORE LIKE THIS
Modus GamesReply Game StudiosSoulstice