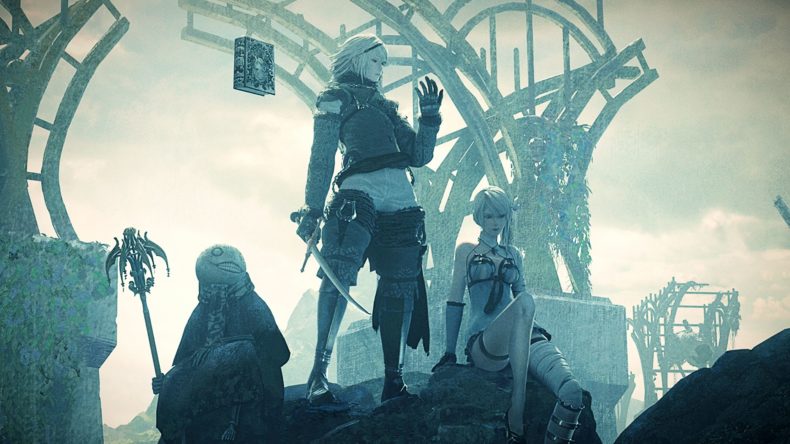 Falling in love with Nier Automata was a given. A bizarre story with stunning visuals. Genres merging and myriad ideas. Yoko Taro’s futuristic mind fuck was a masterpiece. The decision to release the Japanese upgrade of Nier to the western audiences finally allows fans to experience the prequel. With added content and changes to the protagonist, Nier Replicant was an opportunity to tell a more robust version of events. With even more stuff added to this version (the ridiculous number excluded from this review), there’s plenty of reason to be excited. Whilst it isn’t a patch on Automata, Replicant embodies the same feeling of 2B’s story, with incredible combat and some beautiful visuals.

The story follows a boy and his terminally ill sister in a broken down civilisation. After a prologue that allows you to experience all the awesome combat that’ll unlock later, it’s taken away and the game skips 1,000 years. Peak Taro. From then, the protagonist must find a cure for his sister whilst battling creepy enemies known as Shades. A lot of the earlier parts of Nier Replicant are annoying. Going back and fourth between NPCs to ask a single question or have a brief conversation feels pointless. There’s no fast travel (something Replicant even addresses in an ‘oh, well, shit happens’ kind of way), so much of these segments begin to frustrate. When the story does start to pick up, you’ll be visiting nearby settlements, such as a fishing village, a creepy forest, and a mining facility.

As the story progresses, two characters start to follow you around and help out when facing shades. Kainé is a vulgar and troubled young woman who prances about in next to nothing and yells profanities. “I’ll rip your eyeballs out and piss in the sockets” was perhaps a favourite of mine. The other character, Emil, is a little more familiar. He’s a young blind boy that has immense power, and by the time he enters the story, the links between the two games start to show. These friends become part of a family. When the game gets infinitely better halfway through, combat becomes the best thing about Replicant. 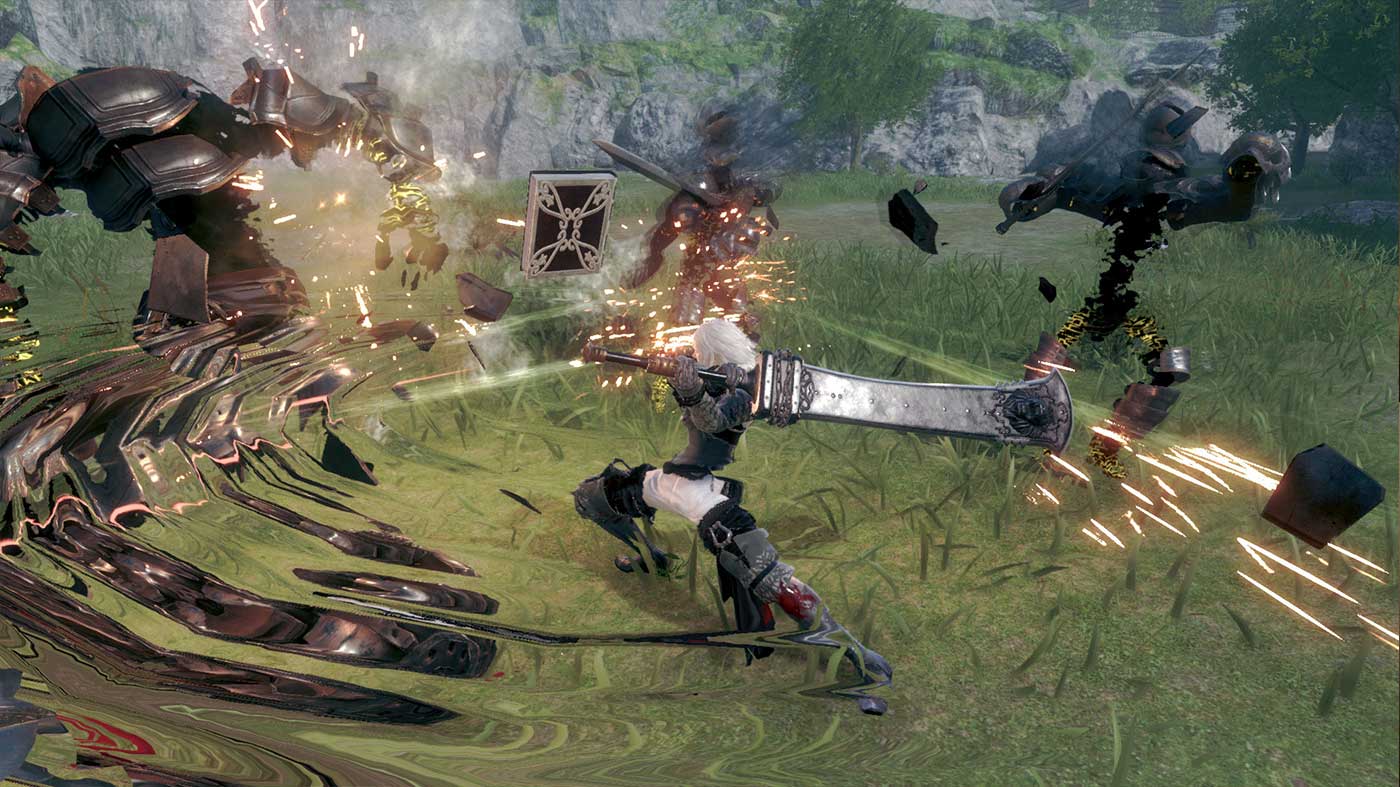 The majority of the characters are likeable. Two members of Critical Role voice two of the characters. Laura Bailey (Kait from Gears, Abby from The Last of us Part II) plays Kainé, whilst Liam O’Brien is Grimoire Weiss, the surly magical book. They bounce off each other well, but also grow as the story moves on. There’re are ton of clichés, but by the time you’re fighting humongous shades and countless waves of enemies, they don’t really matter. Of course, there’re multiple endings. Given the fun likely to be had, they’ll be plenty of reasons for players to keep on playing, especially with how the first one ends.

By utilising dark magic, new abilities can be equipped to the trigger and shoulder buttons. There’re loads to choose from, including spikes that impale enemies, spherical projectiles, and a protective wall. When the protagonist grows up and becomes an adult, the ability to equip new weapons becomes available. Not only are magical abilities being switched around, so too are the weapons. Short swords, great swords, and spears become a part of the combat options. The bigger swords are slower but do more damage, the spear is swift by lacks manoeuvrability, and the smaller sword is versatile but lacks the punch of its larger counterpart. 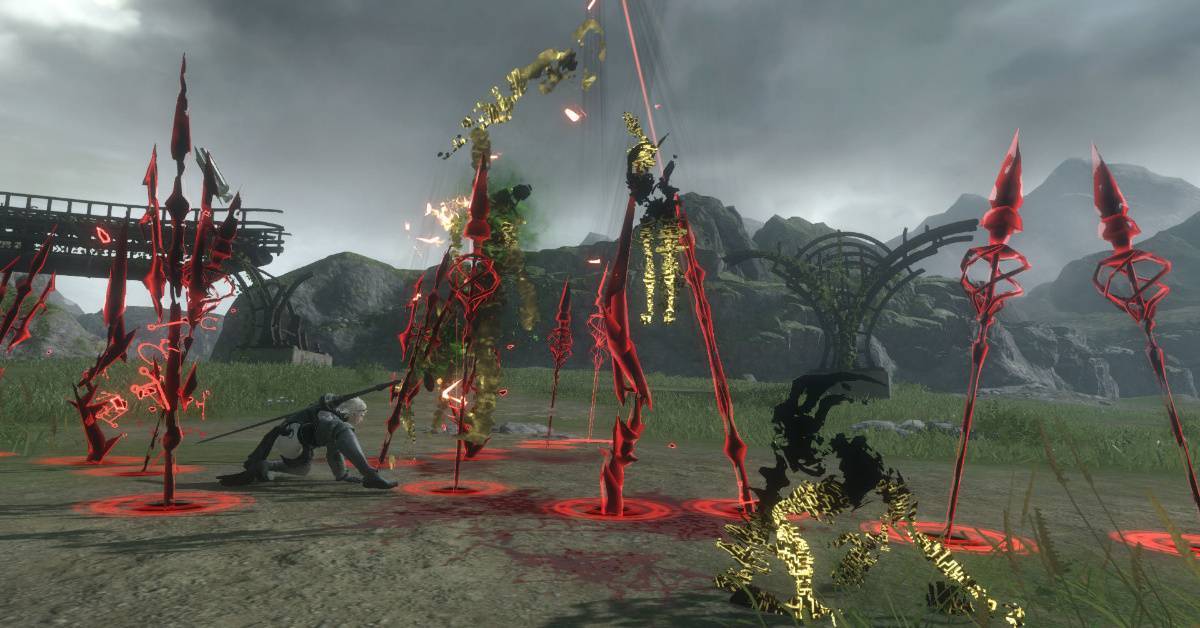 Everything can be switched between quickly. There’s an option for every fight encountered, whether it’s against an army of shades or a big boss. On top of that, each weapon has a story behind it. It doesn’t need to be there, but it just helps to build a connection between the wielder and weapon. Buffs can also be added to weapons with the application of magic words. Whilst it does take a lot of time to get to the better combat scenarios, it’s well worth the wait.

Yoko Taro had a unique way of throwing in aspects of other game styles in Automata, and Replicant is filled with them. Whilst it is an action adventure, other genres pop up. Some areas feel like Diablo, with one particular mansion using the scene transitioning and style of Resident Evil. There’s also a text-based segment. Other subtle nods exist throughout, but they all work. Nier Replicant is a gorgeous game, not just in the visuals but in its gameplay. Cutting through walls of shades, using magic against robots and giants – it all looks incredible. 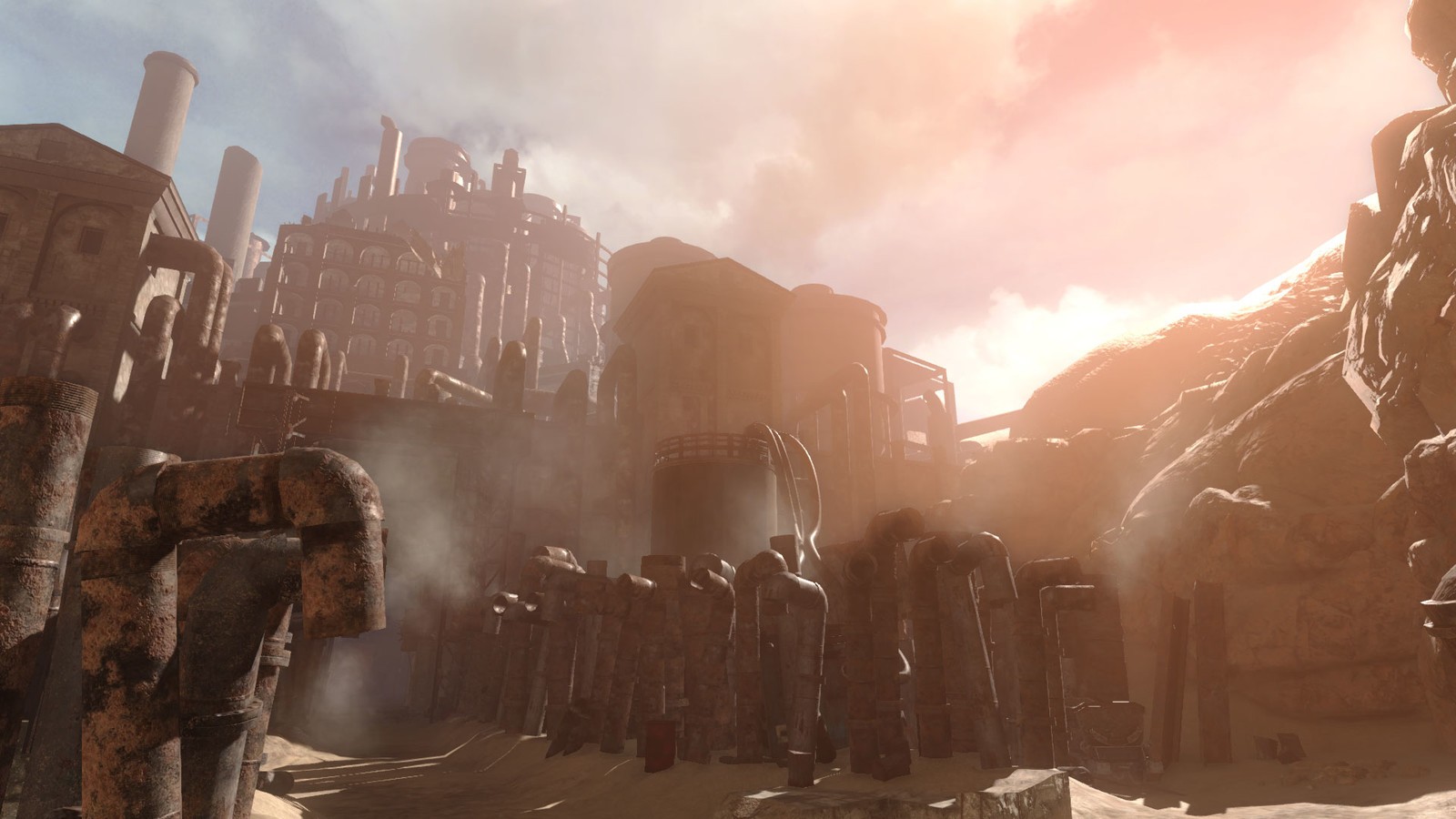 Whilst the environments are also lovely to look at, there’s a lot of emptiness. When action is rampant or the story unfolds in some amazing scenes, these meandering sections slow the pace of an otherwise exciting adventure. A lot of the buildings or areas you enter also suffer from the same desolation. It’s by no means a deal breaker, but it does make Replicant feel lifeless at times.

Nier Replicant is so damn fun to play. Combat is ultimately its best feature, but some of the ideas are implemented superbly, whether in the story or the mechanics. Every environment is beautiful, and as a remaster it improves greatly on its predecessor. In terms of the story, it isn’t quite on the same level as Automata, but that doesn’t mean you’ll feel let down. Replicant is a great prequel, offering an interesting cast of characters and an exciting adventure. I just wish it picked up the pace a lot quicker.

Nier Replicant is so damn fun to play. Combat is ultimately its best feature, but some of the ideas are implemented superbly, whether in the story or the mechanics.

NieR Replicant | How to complete the “Lost Eggs” Quest

NieR Replicant | How to complete the “Boar Hunt!” Quest

NieR Replicant | How to complete the “Fragile Delivery” Quest