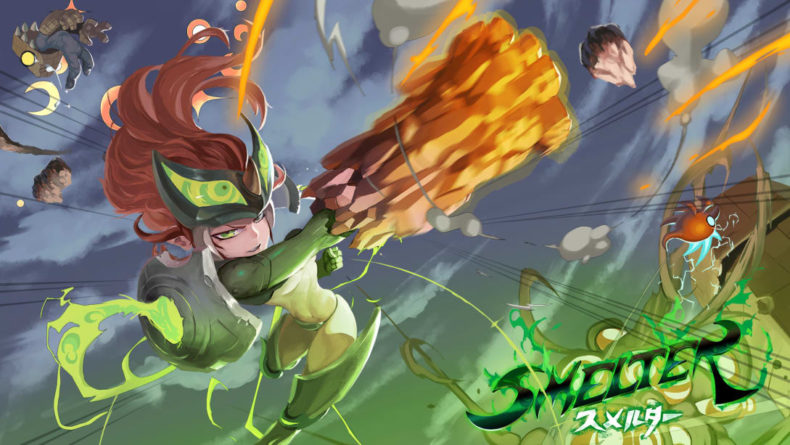 I really enjoy when developers blend genres together to create something unique, but just switching between two distinct gameplay sections can be rather cool as well. I remember being completely blown away by Actraiser on the SNES at a young age, playing action platforming one minute and building a city the next. X PLUS definitely used a little of Actraiser’s DNA when making Smelter, and I am not complaining for a minute.

You’ll be playing through Smelter as one half of the original power couple, Eve. As the Garden of Eden crumbles after your love fancies some forbidden fruit, you find yourself in an unfamiliar land. After a moment of learning how to run and jump, you encounter a mysterious winged creature called Smelter. He offers Eve his help to find her Adam, in return for allowing him to fuse with her and help take back his kingdom. The story is pretty straightforward, but the writing (especially of the arrogant Smelter) is genuinely amusing. 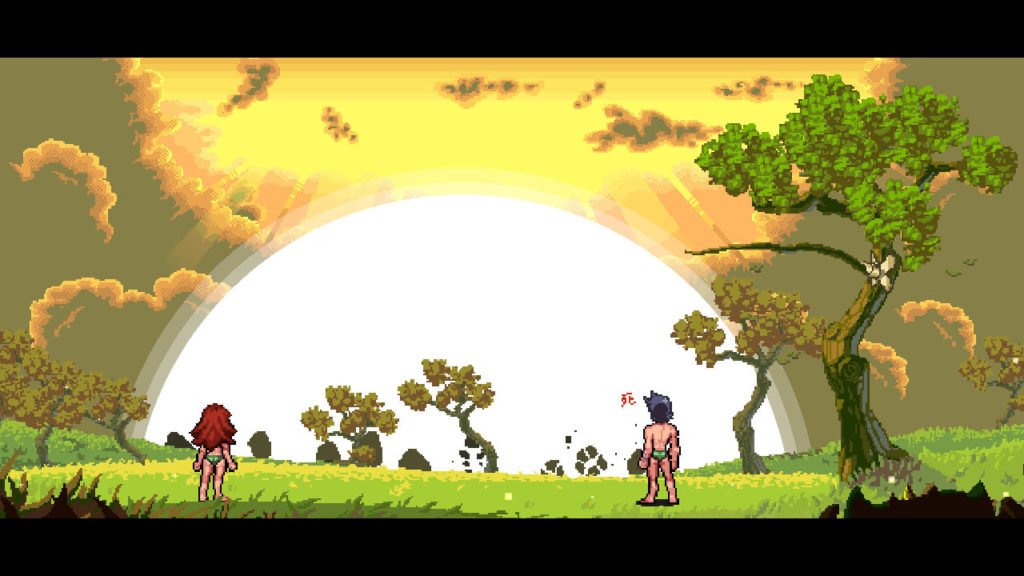 You’ll start Smelter in one of the game’s platforming stages. In these you’ll be aiming to run, jump and attack your way from end of the level to the other, with plenty to keep you busy in between. Thanks to the power of Smelter, you’ll have plenty of abilities to help you deal with the trials ahead.

Upon fusing with Smelter you gain some basic abilities, such as a wall jump and special attack. As you progress further though the game you’ll gain access to tons of other powers, across different forms you can change between. One form has a double jump and melee attacks, another a long jump and longer whip weapon, and there’s even a form with a gun and wings. Switching between forms and using everything at your disposal to overcome the odds is a lot of fun, and necessary when faced with hordes of enemies.

Speaking of hordes of enemies, there are even more foes to contend with in the overworld known as the Rumbly Lands. Between levels you’ll spend your time here, and this is where the strategy game begins. All the staples of the genre are here, with resource harvesting and house building needed to grow your army. 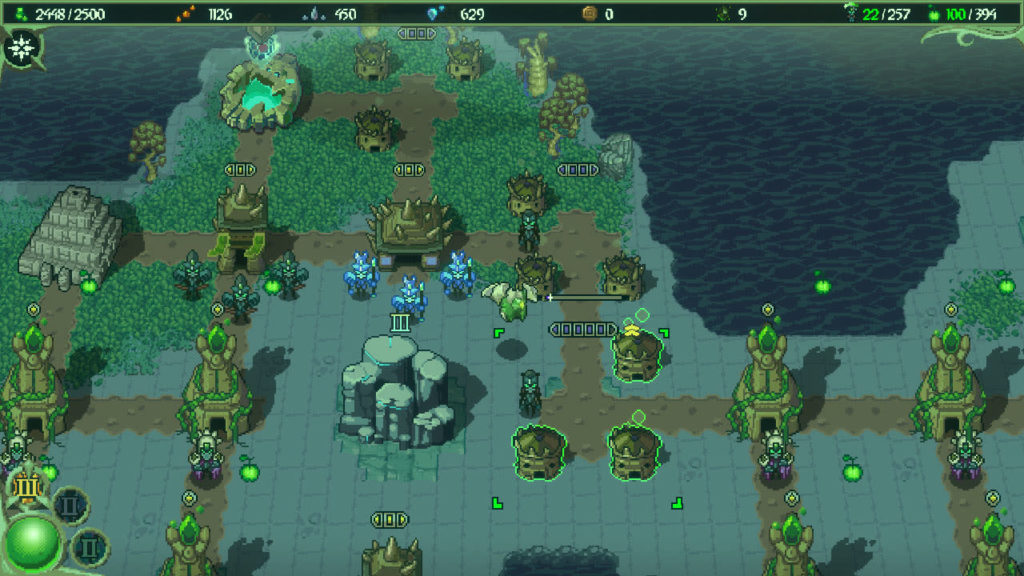 These top down Rumbly Lands sections start out fairly simple, and feel more tower defence than Starcraft, but soon start to beef up in complexity. You have a few types of building you can create, each with their own purpose and potential upgrades. Upgrading a house into a villa means you’ll get more units from it, or maybe you’d rather spend your cash on extra barracks or outposts to wipe out the waves of enemies.

There’s a lot to keep you busy in the heat of battle. Eve herself flies above the battlefield, and you can assist your troops by firing attacks at foes in a twin stick shooter fashion. To keep your soldiers alive though you might prefer to focus on dashing between buildings and repairing them, especially if you need to defend them to complete an objective.

Both sections of gameplay have a direct effect on each other if you really want to be as powerful as possible. Collectables and currency you find in the platforming stages can be spent to upgrade your main tower and unlock extra building upgrades. Conversely, expanding your building to hard to reach areas will unlock new abilities in the side scrolling levels. 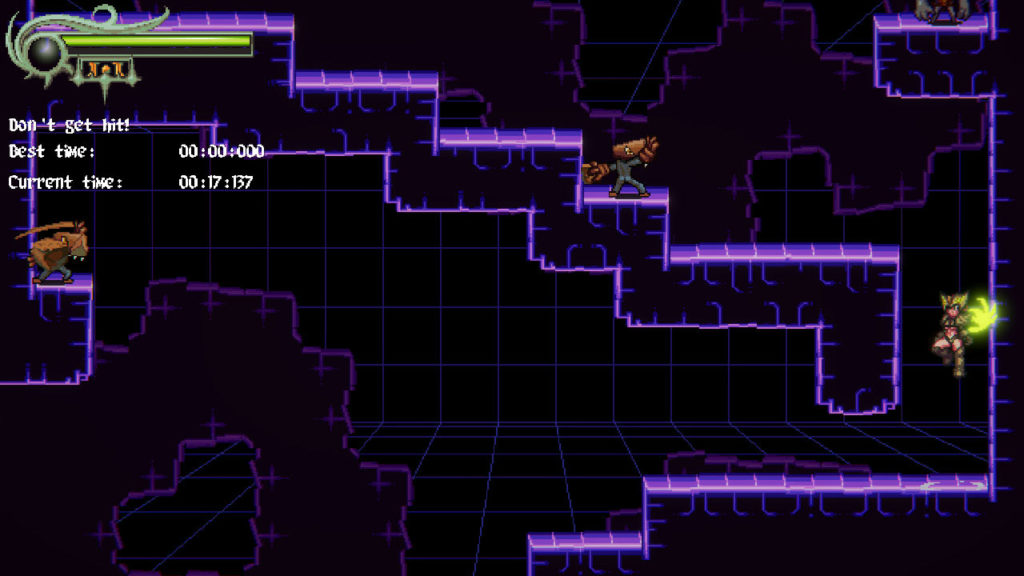 Throughout the entire game, the absolute highlight for me were the challenge rooms. There’s three of them in each platforming stage, with an objective you’ll need to accomplish to collect a precious coin. You’re usually limited to a single one of Smelter’s forms for these, and might not be allowed to take a hit or even be seen by a foe to win.

I did come across a few issues in my time with Smelter, mainly during the strategy portion of the game. There were multiple times where the game wouldn’t tell me my next objective (or let me progress in any way at all) and the only way to fix this would be to reload the game. This was made more frustrating by the game continuing to spawn enemies, which were more than happy to destroy my entire town as I desperately tried to figure out how to continue.

Smelter brings a lot to the table for fans of platforming or strategy games. The upgrades and different forms you can take while side scrolling are really enjoyable, and gathering an army on the overworld is satisfying when your objective works. If fusing genres is your jam, you won’t Adam and Eve how good this game is.

If you want to platform one minute and build houses the next, then Smelter might just be the genre hybrid for you.