previous
Do Not Feed the Monkeys review
random
next
BioShock: The Collection Switch review
0 likes 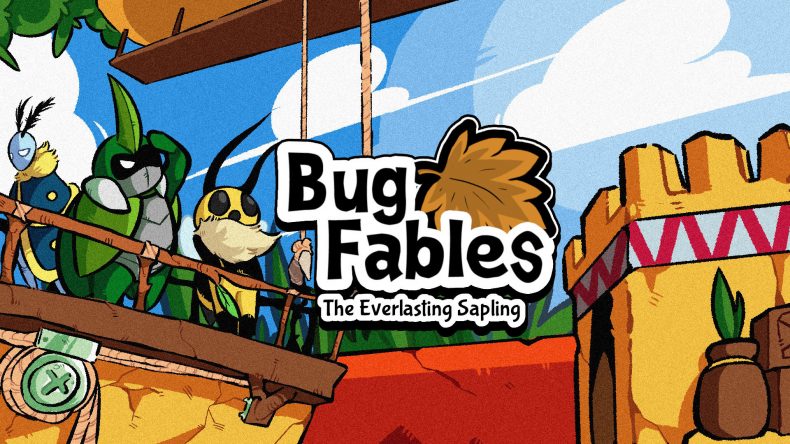 It’s easy to write off a game like Bug Fables: The Everlasting Sapling before you’ve even played it. Watch the trailer and it looks like a poor man’s Paper Mario and the Thousand-Year Door. Visually, it is very similar, and it features insects in fairly standard designed environments, doing typical RPG things in a typical RPG environment. The premise and mechanics don’t appear to be anything new, but after playing for ten minutes I was wrong to judge, and my initial impressions were blasted out the water.

Yes, it is similar to Paper Mario, but Moonsprout Games want it to be. With Bug Fables, they want to remind you of how wonderful the Thousand-Year Door was, however, they also want to bring you a charming RPG that is just as much about the fundamental systems as it is about its story. It has a lot of heart, interesting characters, and straightforward action that has a knack for keeping you engrossed. Nothing about Bug Fables is particularly challenging (unless you want it to be), but it makes you want to keep pushing onward, exploring and uncovering the mysteries that Bugaria has to offer. Unlike most RPGs, you stick with the same three characters throughout. This allows you to feel a deep connection with them and form a bond with each one. On the surface they all have different personalities, but you end up learning a lot about their history, their passions, and their dreams. Kabbu is a brave and loyal rainbow scarab beetle, Leif is a polite and constantly hungry moth, and Vi is a honey bee who loves sarcasm. On the surface they shouldn’t gel at all, but the more you progress their bond becomes a lot stronger, and you end up caring a great deal about them.

The three protagonists set out on a journey to uncover the Eternal Sapling, something the Ant Queen believes can grant eternal youth to whomever possess it. Throughout your adventure, you’ll encounter plenty of different enemies, and each one has various attributes and skills that all act differently. Jellyshrooms throw poison at you and can deplete your life, Ironnails can send you to sleep, and Zombiants can whip you. These are just a few of the enemies you’ll face, as their are plenty to challenge you. There’re also bosses along the way that can take a while to take down, but you’ve got plenty at your disposal, and like many RPGs, you unlock new moves as you level up. Kabbu is the strong warrior, and as you reach a higher rank, his moves become more devastating. Leif uses environmental damage and is the king of buffs and debuffs, whilst Vi heals your party and has some fancy moves of her own. You can change who attacks first, and even in battle you can allocate someone’s turn to another party member. Leif is great at unearthing burrowed enemies, and Kabbu is a savage who can flip armoured enemies on their back. Vi is an all-round badass who can be utilised in many different ways. You also have Teamwork Points that can be used differently to your normal attacks, making every battle different.

There are so many environments in Bug Fables. Towns have shops and hotels, dungeons are filled with tough enemies, and the routes between them are littered with their own challenges. You’ll unearth puzzles and quests of all varieties, making every area worth exploring, however, you can often take on so many quests that it’s tricky to keep track. The NPCs are mostly interesting to chat to, and the gorgeous design of the world never starts to becoming boring. Moonsprout has made a beautiful game, with bold colours and a surprising attention to detail. Bug Fables: The Eternal Sapling also has a wonderful soundtrack that inspires you to play more. It may play and look like a Paper Mario replica, but it is very much its own game. I was engaged in it from the start, and as you play more and more you start to appreciate how simple and fun the game is to play. Certain moves require button inputs that need to match what prompts appear on screen, whilst other times you just need to press at the correct moment. Regardless of how you execute your move, it always feels fresh.

Bug Fables: The Eternal Sapling is a charming RPG that continually feels new, and the characters in your party all help to tell an interesting story. New skills and items help to reinvent the mechanics, and the medals also offer new ways to play and shake up the battles. Kabbu, Leif, and Vi’s journey is an epic one, but it’s one you’re going to want to experience. It looks gorgeous, it sounds brilliant, and you’ll never grow tired of its constantly evolving gameplay.

Bug Fables: The Everlasting Sapling is a beautiful and engrossing journey, filled with fun combat that never loses its edge.