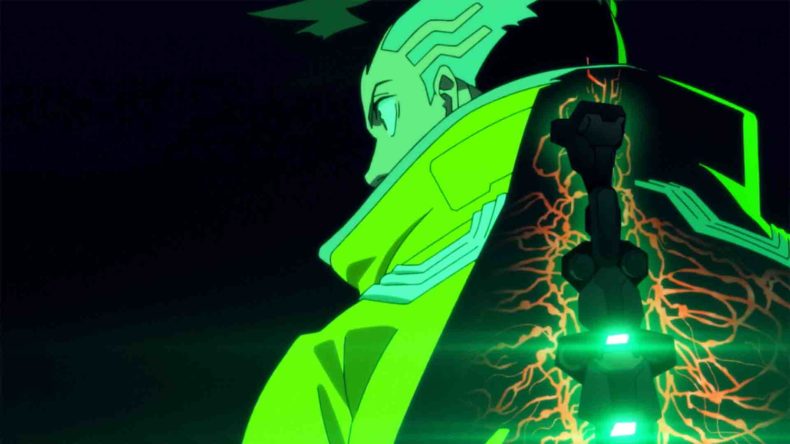 After seeing the intro for Cyberpunk: Edgerunners, we can now all watch the full thing, as the first season has hit Netflix today.

Each episode is around 24-27 minutes long, and there are ten episodes for the first season. The first episode is called “Let You Down” and has the following synopsis:

After a night of streaming illegal braindance, David wakes up to reality: a rundown apartment with a broken washing machine and an overworked mother.

As for the series overall, the official blurb is: “In a dystopia riddled with corruption and cybernetic implants, a talented but reckless street kid strives to become a mercenary outlaw — an edgerunner”.

In a recent Night City Wire, Bartosz Sztybor — one of the creators of the show — sat down for an interview to provide insight and details about the anime, discussing the story, themes, characters, and more. He talked about the influence of collaborators Studio Trigger — the legendary Japanese studio bringing the world of the anime to life — the anime’s connection with Cyberpunk 2077, and more.

Elsewhere, the Cyberpunk 2077 expansion got detailed and is called “Phantom Liberty”, and will be coming to PS5, Xbox Series S|X, and PC in 2023 — yes that’s right, no PS4 or Xbox One version of that expansion is happening. Details have also been revealed about Cyberpunk 2077’s latest update, the Edgerunners Update — also known as Patch 1.6 — which introduces equippable items from the anime to the game. Players will have the chance to don the jacket worn by David Martinez, the anime’s protagonist, and wield a shotgun used by another character from the show. Alongside Edgerunners-inspired items, the update also brings a swathe of features to the game including a clothing transmog system, cross-platform progression, playable Roach Race minigame arcade cabinets, and much more.

Cyberpunk 2077 and Cyberpunk: Edgerunners are out now.