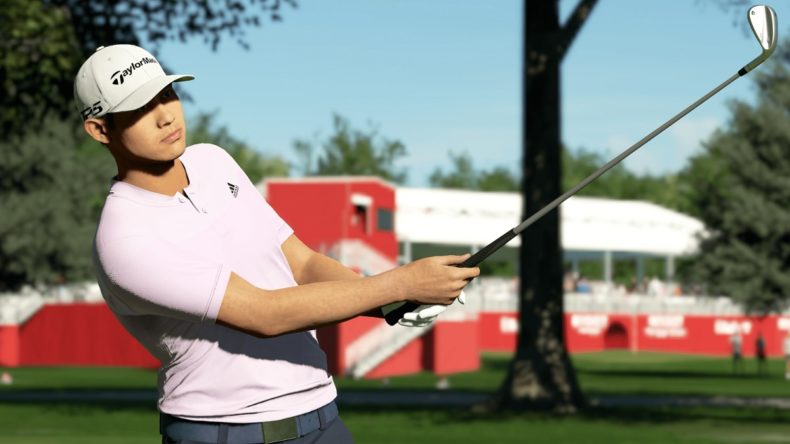 Golf isn’t for everyone, but when a developer works hard to make those that are keen or interested to get involved in the sport, it’s hard not to give them credit. When it comes to arcade experiences with more of a focus on fun, it’s easy to choose Everybody’s Golf or Mario Golf: Super Rush as a go to, but PGA Tour 2K23 also wants players of all skill levels to enjoy the sport, and with new modes like Topgolf and the 3-Click swing mechanic, it’s likely 2K will bring a flurry of new fans to the franchise.

The authenticity of the swing is where PGA Tour 2K23 is at its best, and with two solid approaches to how you strike the ball, there’s plenty of room for customising just how you choose to play. The analogue swing is where those wanting more of a challenge will thrive. Pulling back on the right stick, then pushing forward in one fluid motion provides a deep level of control. Take too long to push forward and you’ll slice the ball, causing you to fluff the shot, and being too quick will hook it. Becoming familiar with the rhythm is where the skill lies.

Making sure you pull back to set the power in the right area of the gauge and following through in a fluid motion will reap the best results, offering some gorgeous plays down the fairway. If you’re not swinging straight with the stick, you can veer off to either side, and when wind is against you, landing in the rough is a common occurrence. I found the analogue swing a little sensitive, so I opted for the new 3-Click swing mechanic. To say it improved the game for me would be an understatement, as it provided pinpoint accuracy and removed any of the frustration I was feeling. 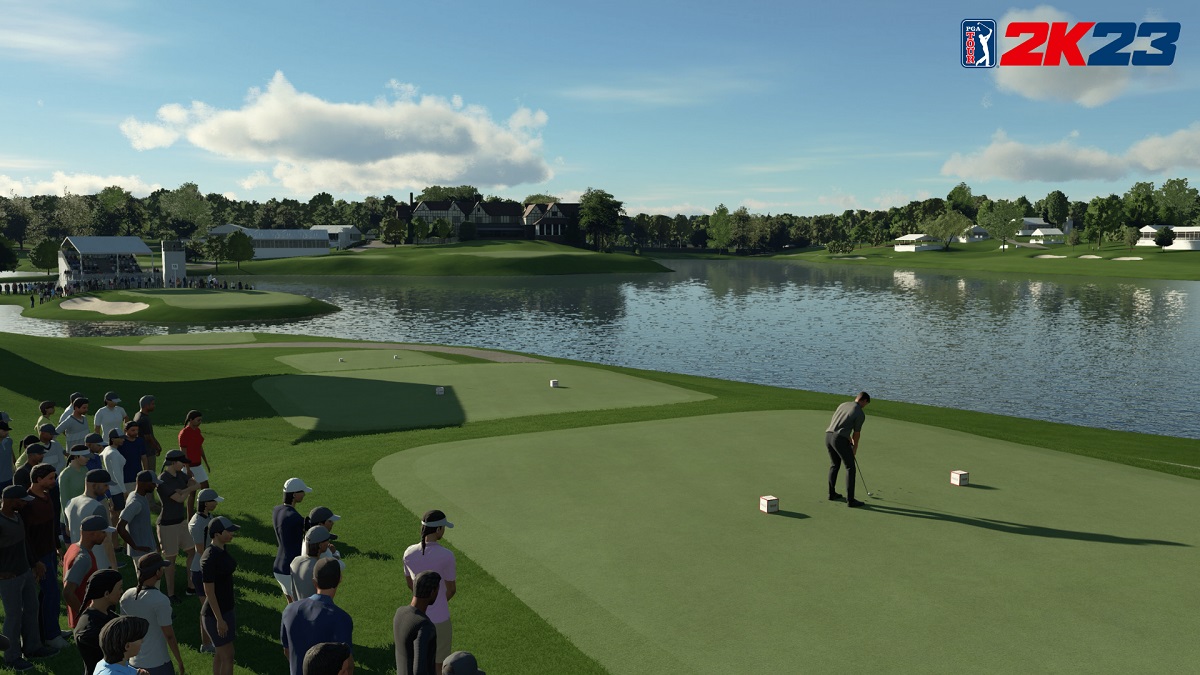 Initiating the swing with a button press, then pressing again when the circle fills out to the right point will reach the required amount of power you need. Then, timing your next button press to get the marker to stop around the circle for accuracy was the final step. I never fluffed a shot, and it made me feel like a better player for it. You can switch between the two at any point, allowing you to experiment to find what works best. It may not feel like a huge addition, but the 3-Click swing is a gamechanger for fans who have struggled with the more realistic analogue swing in the past.

The focal point of PGA Tour 2K23 is creating a MyPLAYER and taking them from relative unknown to a major player in MyCAREER. The levels of customisation is much deeper this year, having control over how they look with the ability to upgrade skills and how your player performs throughout. Staring off at the very beginning by qualifying in the Korn Ferry Tour or starting off competing for the FedEx Cup is up to you, but seeing the progress you make from rookie to pro is more than satisfying. You’ll be able to pick up sponsors each with their own tiers, and good performance will unlock new items, whether new apparel, clubs, or balls, and give your player a unique look. 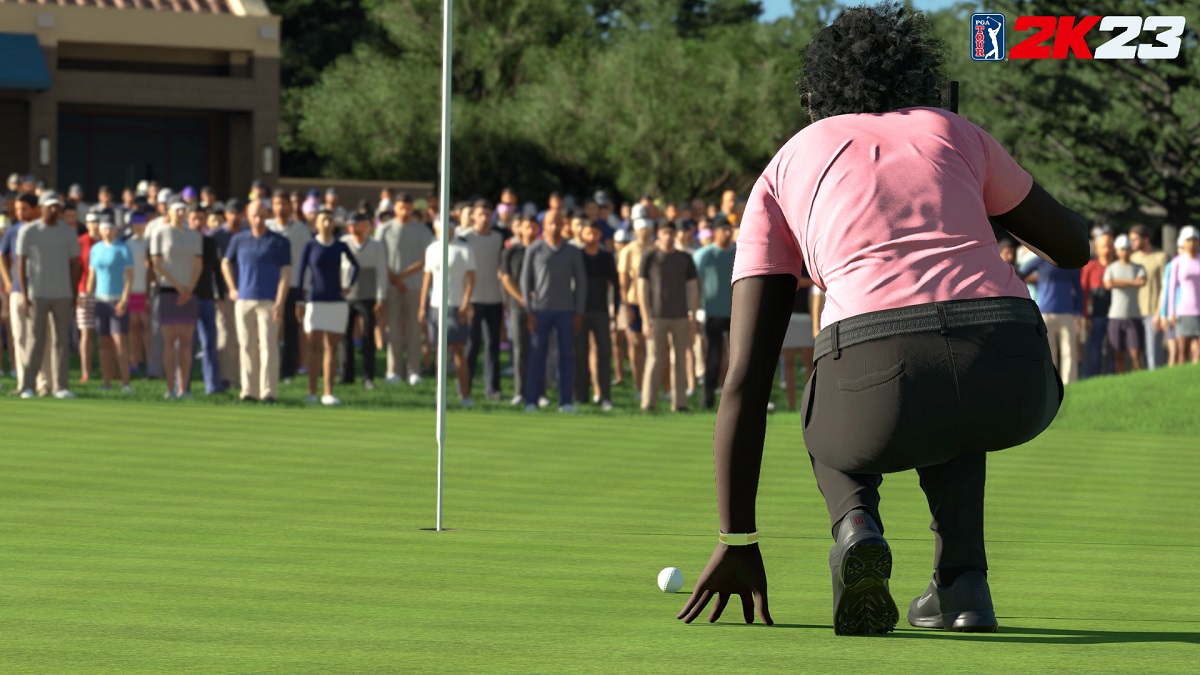 The same happens when you pick a rival in the big leagues, and by outperforming against them will also give you rewards. Not only is there a reason to play better than your rival, it’s also interesting to see how your rival is getting on during the same course as you, with replays of their performance and updates from the commentary team as you play. There’s an effort to make play feel more competitive and exciting, and when you’re reminded about how modern golf players taunt each other through social media, it adds to the spectacle of a sport that once felt like it could only be enjoyed by an older audience.

Another new feature of PGA Tour 2K23 is Topgolf, a driving range game that came to fruition at the turn of the century. The Las Vegas resort features various targets of varying sizes and distance from the tee, where players must use all their skills to get high scores by hitting the ball as close to the centre of each target. It’s become massively popular in the golf word, and for the first time ever, it’s now playable on video game platforms. It’s a lot of fun, and tests skills in a new way, as precision is vital in order to get the highest score. Each game consists of ten shots, and targets change for each swing. 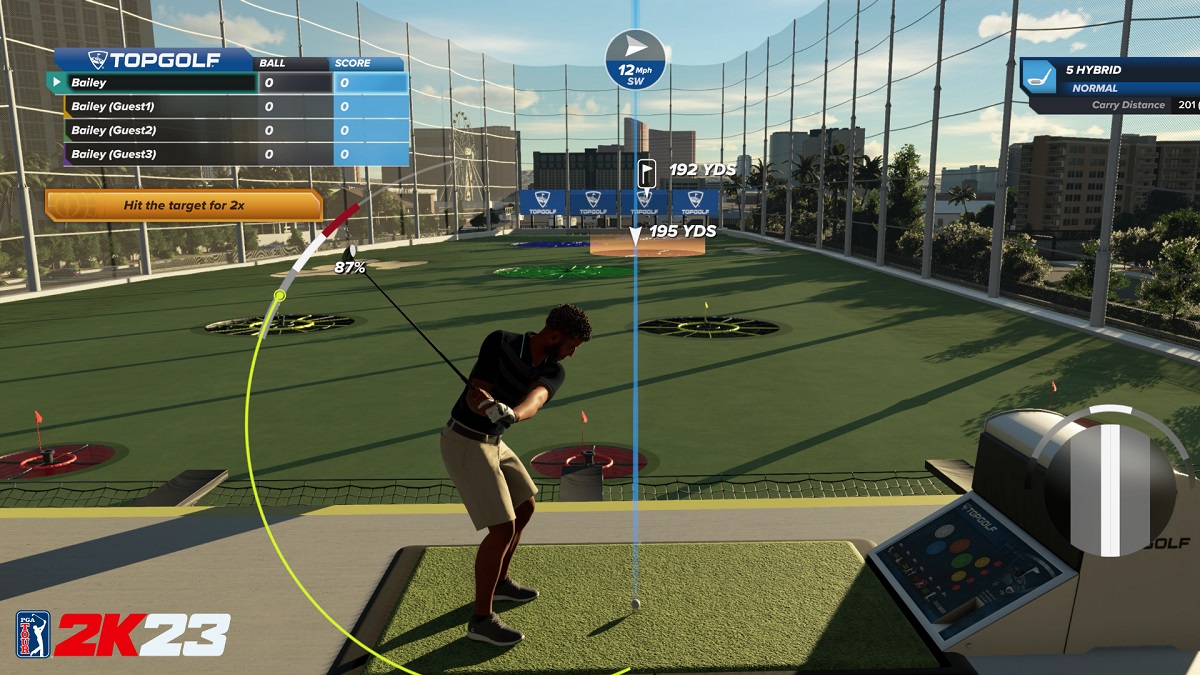 Getting the bullseye on selected targets ensures you get the highest score possible. It requires players to take in everything they’ve learned on all the official courses to make precise shots, still taking into account wind speed and direction, the various types of shot, and club selection. It offers a nice distraction from the lengthy competitions of the PGA Tour, adding another element of fun while still making use of the simulation mechanics. Visually, PGA Tour 2K23 is stunning anyway, and having that gorgeous Vegas backdrop shows just why 2K are so popular when it comes to their sports titles.

PGA Tour 2K23 is shaping up nicely, with more refined controls that help to give players of all skill levels an opportunity to play how they see fit. In the past, the analogue swing hasn’t always given the right kind of control, especially for players like me who know little about the sport, but the 3-Click is perfect at introducing the joys of golf to everyone. The MyCAREER and customisation options feel deeper, allowing you to not only make your golfer look good, but shape their playstyle to exactly how you want to perform on the courses. Finally, Topgolf is a welcome addition, and I can see many fans enjoy the mode with friends as they compete for top scores and bragging rights.

Video games are cool. Don't let anybody tell you any different.
MORE LIKE THIS
2kPGA Tour 2K23tiger woodsTopgolf