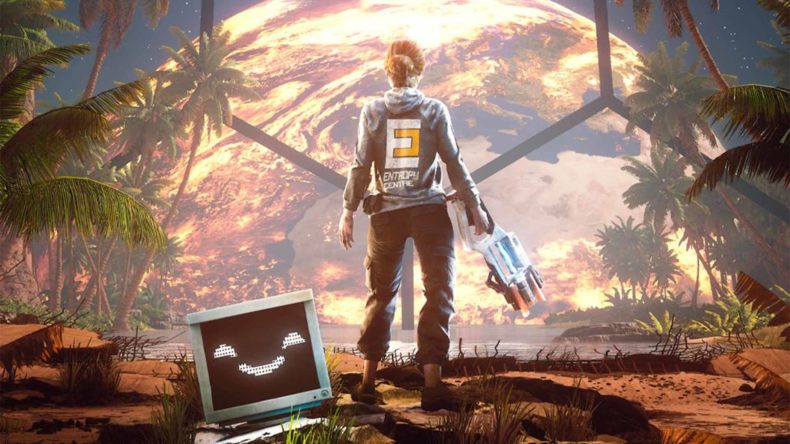 It’s going to be impossible to talk about The Entropy Centre without the elephant in the room cropping up. This particular gigantic grey constantly-eating mammal has a name, and it’s Portal. The Entropy Centre will be compared to Valve’s phenomenal series, but in fairness, not only does Stubby Games’ developed title not shy away from similarities, it earns the comparison right out of the gate.

Yes, you’re going to be using cubes on pressure switches on the floor; yes there are jump pads (though you can move them and use them with switches in The Entropy Centre); yes there’s a disembodied voice talking to you about the larger issues at hand, but why none of that seems bad is twofold. Firstly, there aren’t many games like the Portal titles, and secondly, this one makes you go “oooooh that’s clever” within 15 minutes, just like Valve’s games. 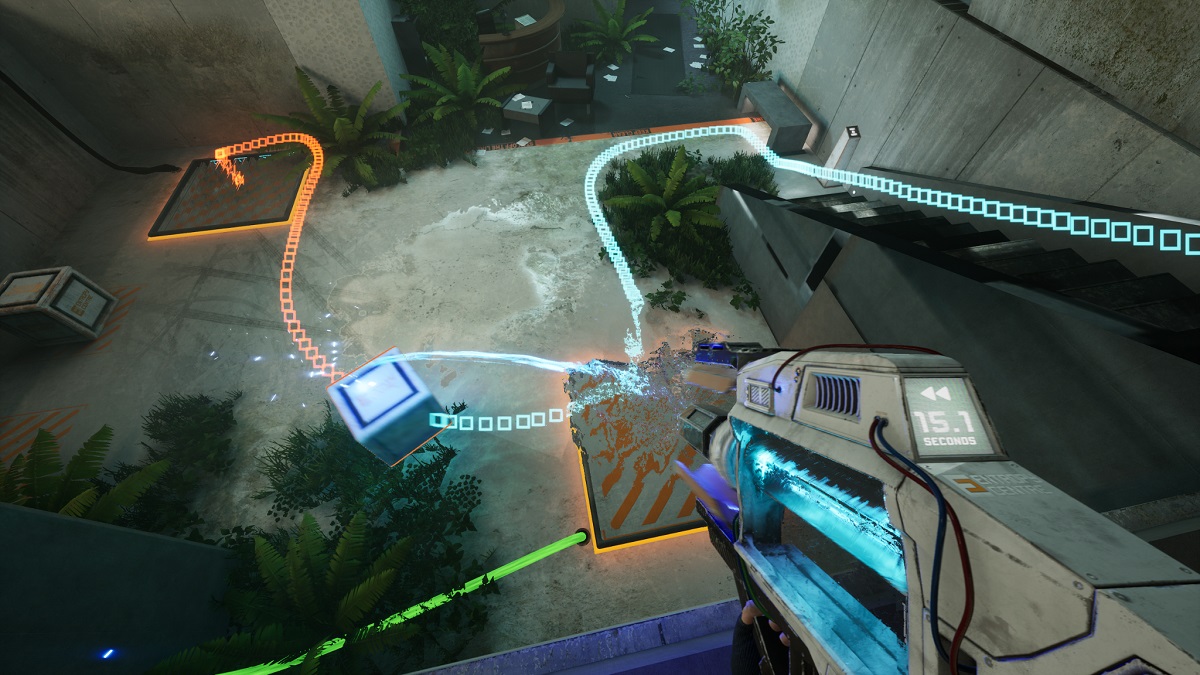 The crux of The Entropy Centre is that you have a gun that can rewind time. Quickly, you meat PEA, an AI that lives in the gun and can talk to you, winding you up by noticing your increasing frustration and anxiety and offering you a beverage, as if that’d somehow help. The gun can’t rewind indefinitely, however, instead it can manage 30 seconds. Early puzzles are simple: stick a cube on a switch, then back off the switch; then back onto another switch. Go to the place the switch opened, rewind time to open the exit door by rewinding it onto the other switch, and move on. Rinse, repeat; done, right? Not quite.

Almost as soon as you get your puzzle-legs, time gates are introduced. These don’t hurt you, but they will destroy any cube you try to pull through them, or rewind through them. Immediately this requires you to think laterally, sometimes causing you to put two cubes on one switch, and moving them all over the place. I couldn’t help feel I was almost brute forcing some puzzles, and once you start needing three switches to be pushed but only have two cubes, it starts to get the old grey matter grinding pretty quickly.

Jump pads can be used, but also moved, meaning they can replace switches. One puzzle requires you to put the puzzle onto a switch then move to a position to launch yourself. Do so, then rewind the pad onto a switch, and it’s job done. But there’s so much more. You can tap a key to see the rewind motion of an object in advance, but you can also “stop controlling time”. In some cases, this is required to solve a puzzle, and you have to use yourself as the pressure on a switch, and the cube as the final puzzle solution. It’s clever, and yet again an “ahhh” moment.

The environment can be rewound as well. Structures will crumble and need adjusting in order to progress, and I’d wager these will come more into play in the full game. The world is interesting, too, with collectible stories off the beaten track. You can read emails on computers, and find out backstory. It’s early days, but I found myself wanting to know what was going on in the world of The Entropy Centre.

All of this suggests this could be the best first-person puzzler since Portal. Yes, it’s a twist on something you know and love, but it’s the first puzzler I’ve played in a long while to get what made the games it pays homage to quite so special. You don’t even have to just take my word for it, because there’s a demo available on Steam that’ll let you try the opening portion of the game, before the full version comes to PCs and consoles later in 2022.