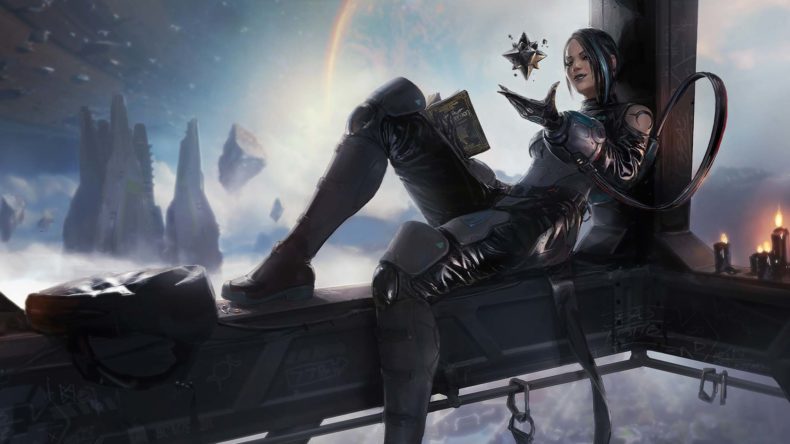 Season 15 of Apex Legends means another legend in the form of Catalyst, new changes to the game to spice up gameplay, and a new map, Broken Moon. It also means lots of new talking points for the new map, and more new features like the new Zip Rail and news about cosmetics.

The first thing to unpack here is the new legend, Catalyst. She joins the Apex Legends world as the first transgender woman to the title and brings even more diversity and representation to the already wide cast of legends. Catalyst’s introduction brings back the broken moon (or Cleo) and starts with her and a friend talking about saving Cleo. Upon a disagreement on how to save the planet, the two split from one another and the bomb planted by Catalyst’s friend explodes dealing irreparable damage to both of the characters. Later on she returns to the planet (her home) wielding Ferrofluid. This is a dangerous and mysterious substance that seems to have both liquid and solid properties able to slow and damage. 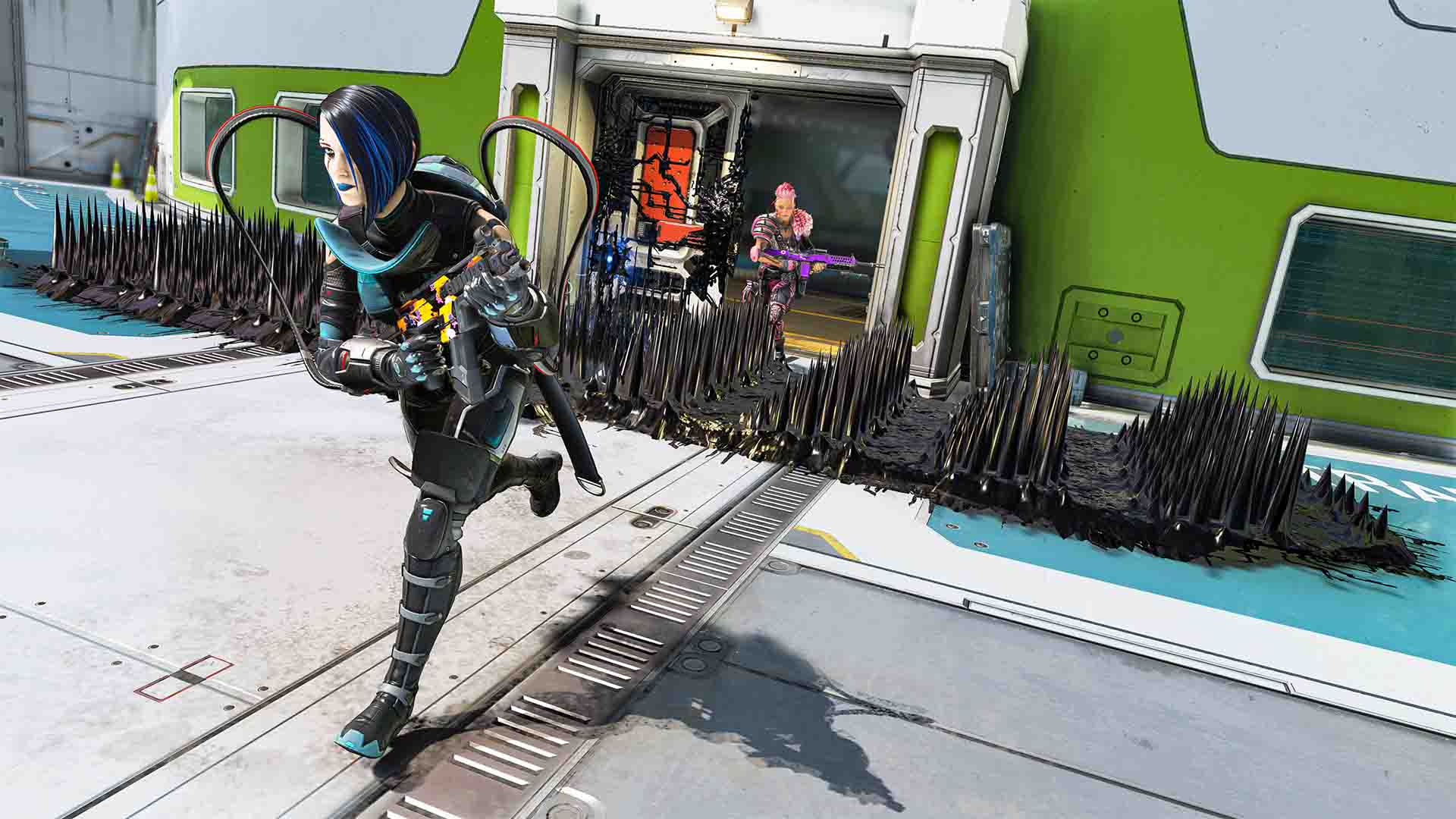 Although ferrofluid has liquid properties for the most part, it can also form a hard wall which is showcased through her abilities. Catalyst’s passive, barricade, is excellent for fortifying. Barricade gives an extra button prompt on doors for Catalyst to reinforce them, and doing so means they take twice as long to break down with a melee and can only be opened by teammates. You can only reinforce two doorways at a time (it is important to note that double doors count as one doorway) and the effect is permanent until the door is either destroyed or another wall is reinforced. Her passive reinforcements do not impact legend abilities and doors can still be destroyed by explosions and explosive abilities such as Mad Maggie’s wrecking ball.

Her tactical is called “piercing spikes.” Here, Catalyst throws out a patch of ferrofluid that turns into spikes. When in them, enemies are slowed and take damage and in order to destroy it you need to be somewhat nearby meaning that it cannot be destroyed from range. This makes it an excellent tool for area control resulting in it being both an excellent initiator and tool for reinforcing any area that you may hold. Most importantly, her ultimate ability is called the “dark veil” and is a dark wall which can be walked through. When enemies walk through they are slowed and blinded partially and temporarily. It blocks most scan tech that is not also an ultimate. For example: Seer and Bloodhound’s tactical and also Seer’s passive. 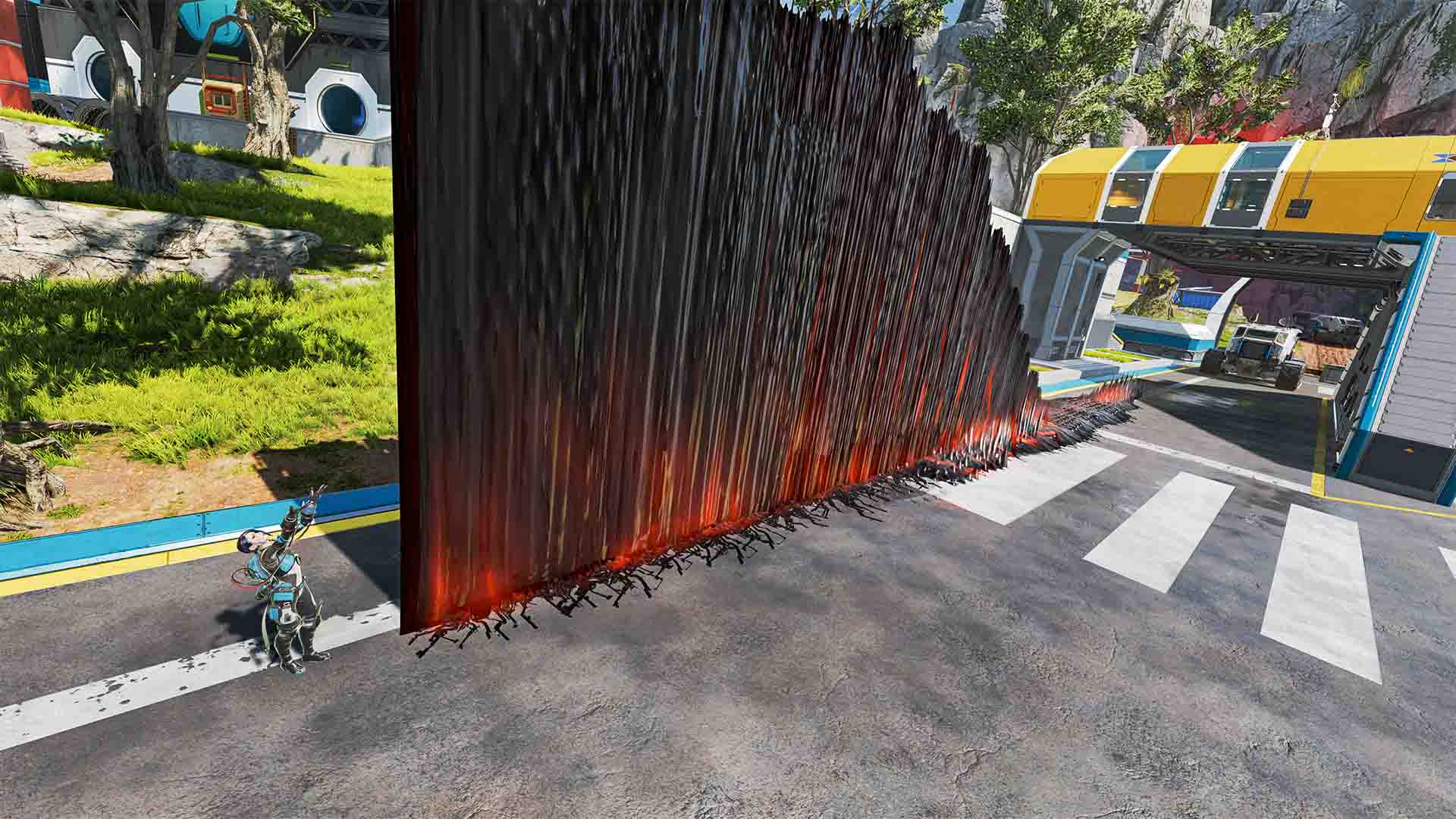 This makes it an outstanding tool to counter scanning legends. Catalyst’s ultimate seems to work well with defensive legends such as Caustic and Watson due to their defensive utility such as electric fences. In addition it also works well with characters like Octane to aid with rotation around fights, but is also countered by legends of the same variety as it is easy to manoeuvre around when used in the open. Horizon can use her Gravity Lift (or Cue) to rise above the ultimate.

Moving on from the new legend and how she interacts, a new map was also revealed: The Broken Moon. Whilst no intricacies like names of points of interest were shown, we did however get revealed to us the total number of POI’s, a new feature exclusive to this new map and the size of the map revealed in a comparison to an already existing map. 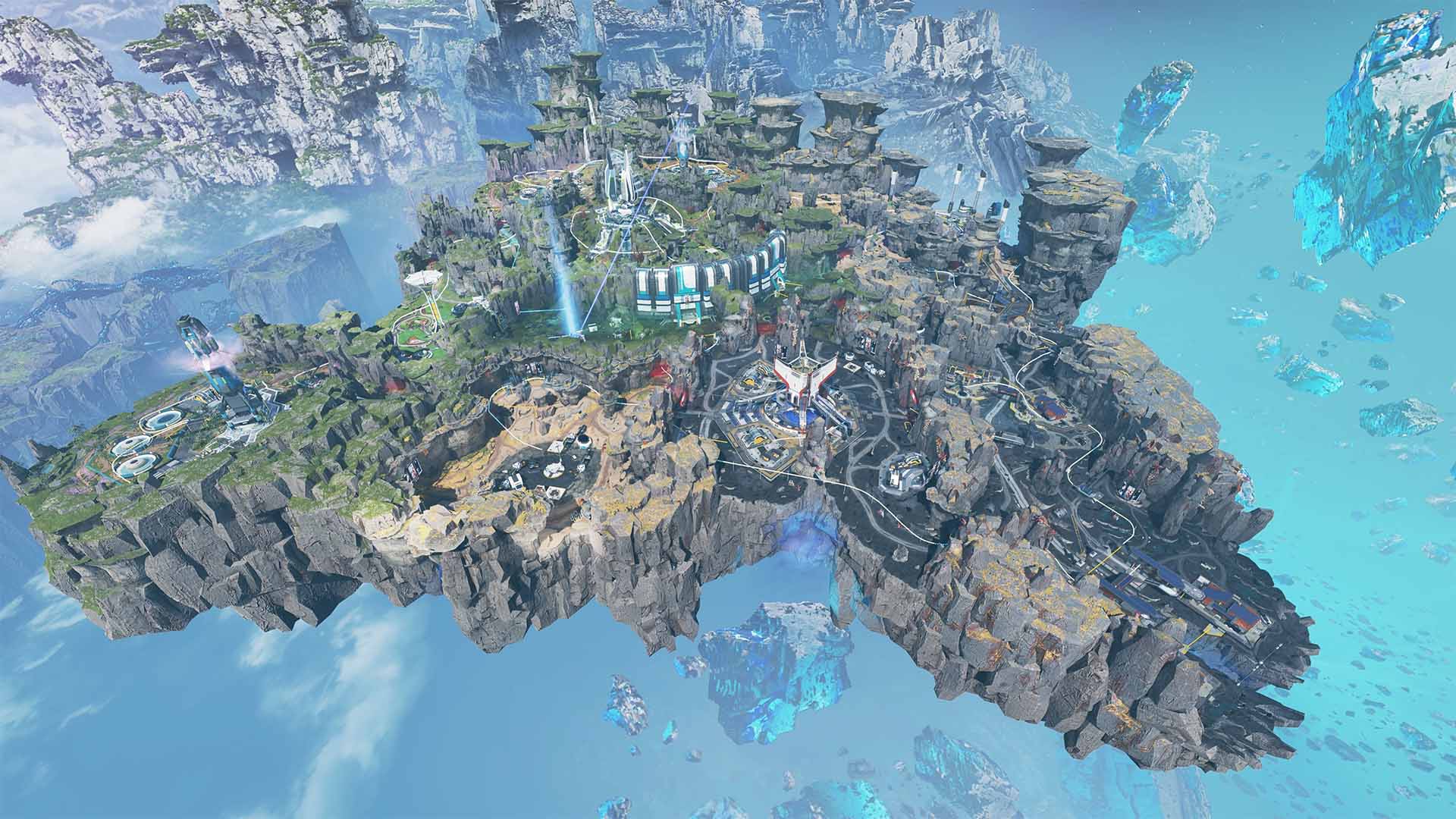 Broken Moon has sixteen points of interest, and while that may not seem like a lot, the new points of interest are a little bit different on this map. On Broken Moon there are larger POI, said to be double that of what could be considered a normal sized point of interest. However, this does not mean that the smaller type is not here. These large areas should allow for a more interesting first fight due to more loot and more space, allowing the player to decide upon whether a fight is one they would like to take.

In addition a new feature is added to the map: Zip Rails. Very similar to the normal zipline, except longer, spread across huge areas and you gain speed on them as you travel further on them. The aiming behaviour is the same as a normal zipline and you will lose some accuracy if travelling at very high speeds. The Zip rails will allow for some interesting fights, almost like jousting across the meeting point of two rails. It also acts as a substitute to the balloons as a way to travel a far distance quickly. 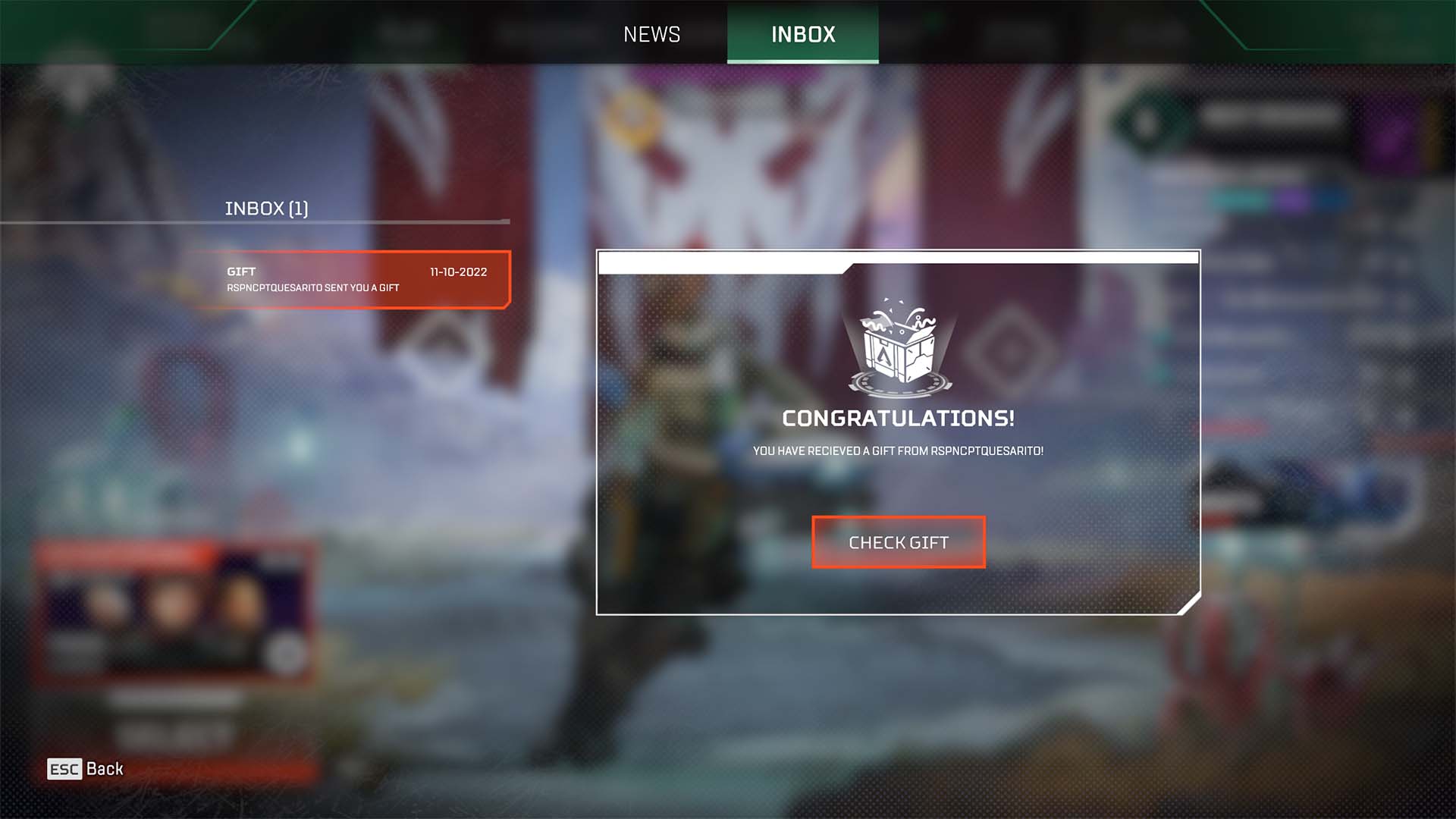 Moving on from the new map, a new feature and new cosmetics are coming. Gifting (something that some players have been wanting for a while) allows any skin or gun skin to be bought and gifted to another player, and while there was no specific criteria given to what is giftable, anything that is will be stated so within the store when you look to buy it. In addition, there is no region lock for this, meaning that you can gift anyone anywhere. For the new cosmetic, stickers were introduced. These are used on healing items to give a bit more personality to the player and game itself. Stickers can be put on any healing item.

Respawn, then, has set out another exciting season for players of Apex Legends and found another way to keep the game fresh with a new map, a revision upon the start of the game in changes to areas of interest, whilst revealing a potentially meta defining character; and this is something I greatly look forward to.