previous
Amnesia: The Bunker is the next game from the Soma and Amnesia creators
random
next
The Callisto Protocol | How to beat Two Head boss guide
0 comments 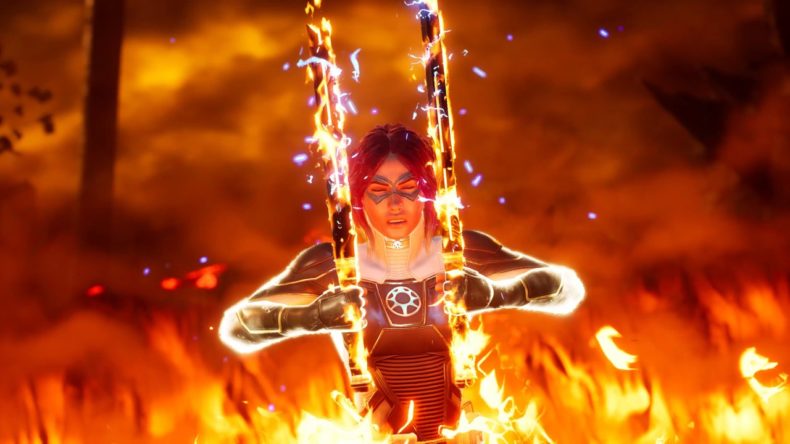 There are many challenges scattered throughout Marvel’s Midnight Suns, from the superhero-based tactical combat to the multiple Mysteries found in the grounds of the Abbey, your ancient headquarters. But some of the trickiest missions in the game are the optional hero Challenges, which unlock as you hit maximum Friendship level with each hero. The first you unlock is, unsurprisingly, the Midnight Suns Hunter Hero Challenge your custom-made protagonist.

These Challenges are like puzzles with very specific solutions tailor-made for each hero. The reward for the first challenge is an incredibly powerful ability called Bladestorm, as well as your Midnight Suns-themed super-suit. Unforuntately, this challenge can be super tough, with one very restrictive solution. Luckily for you, we’ve solved the Midnight Suns Hunter Hero Challenge and made this quick guide to help you through it. 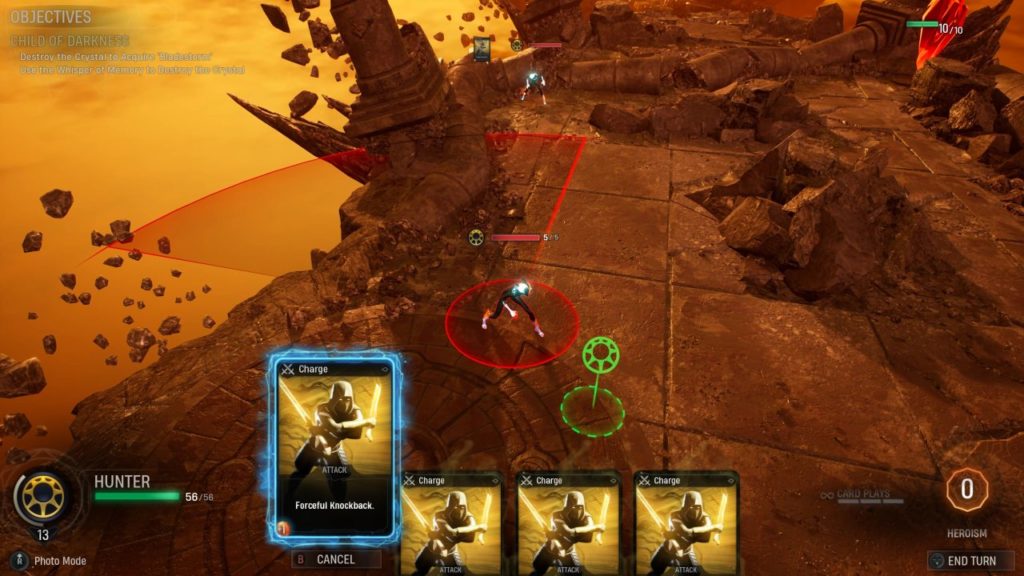 Unlike most missions, your objective here is outwardly very simple: there are four enemies called the “Whisper of Memory”, and you need to use one of them to destroy the red crystal containing the Bladestorm ability.

As you enter the arena you’ll notice you have only four Charge cards in your hand. This is a “Forceful Knockback” ability which does no damage on its own. It has to bounce an enemy off an obstacle, wall or creature to deal damage. What you’re doing here, essentially, is playing pool with demons. You also have no movement points, so you’ll need to use the ability to move the Hunter around. 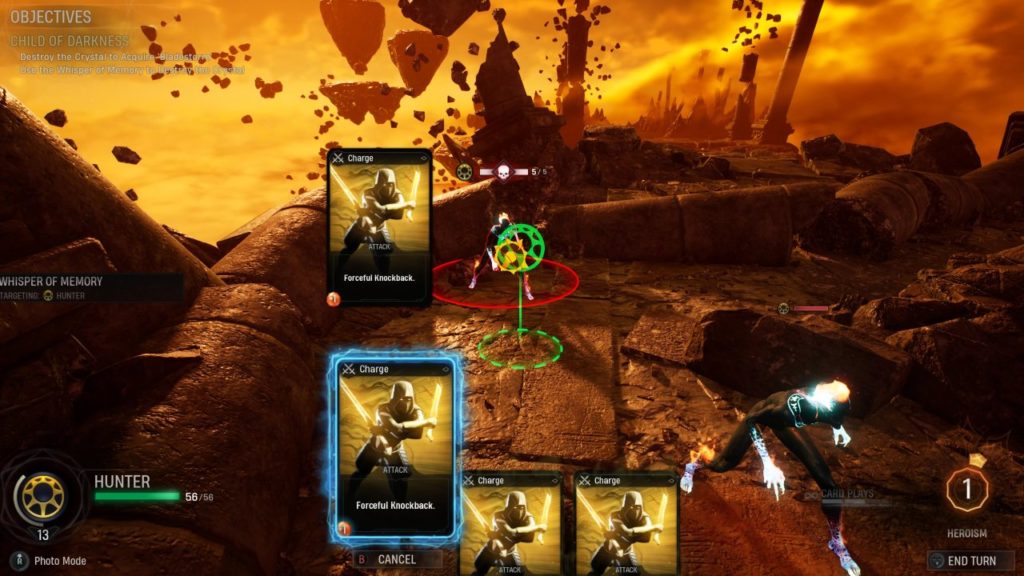 First of all, use Charge against the enemy just ahead and to the left of you. Knock it in a straight line “north” towards the one near the far wall, opposite the red crystal. It won’t hit anything, which means it won’t die. This is good. You need it alive for now. 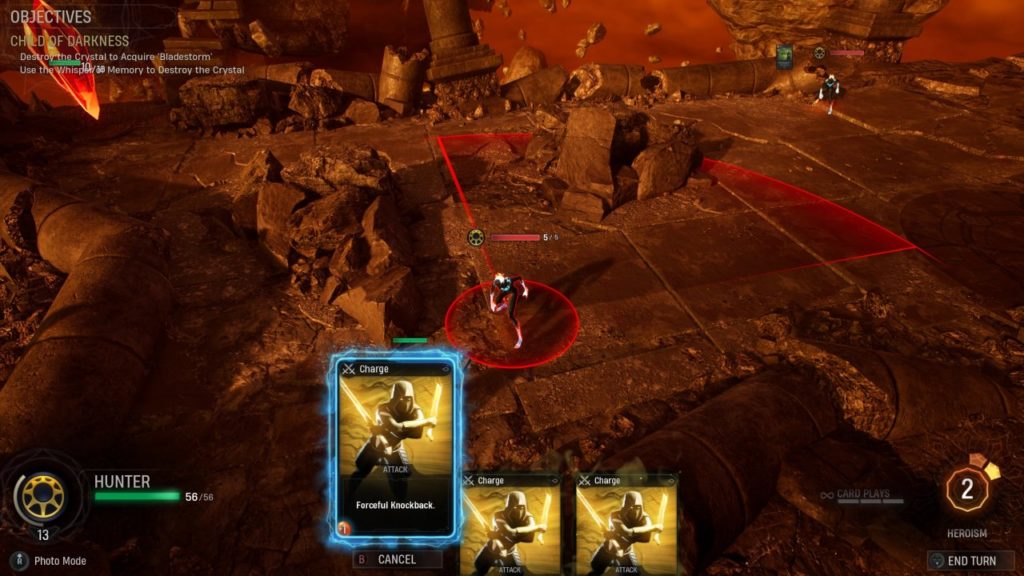 Now knock that farthest enemy into the wall right behind it, to kill it and acquire a fresh Charge card. With that, target the first guy again and knock him directly back from where he is towards the toppled pillar, so that he’s now on a straight line from the third enemy. Again, this won’t kill him, and that’s fine.

Next, target the third enemy, the one you’ve ignored up to now. He’s carrying a Whip card, which allows you to apply Forceful Knockback to an enemy in any direction. Smash this dude against the wall right behind him with Charge to kill him and acquire Whip. 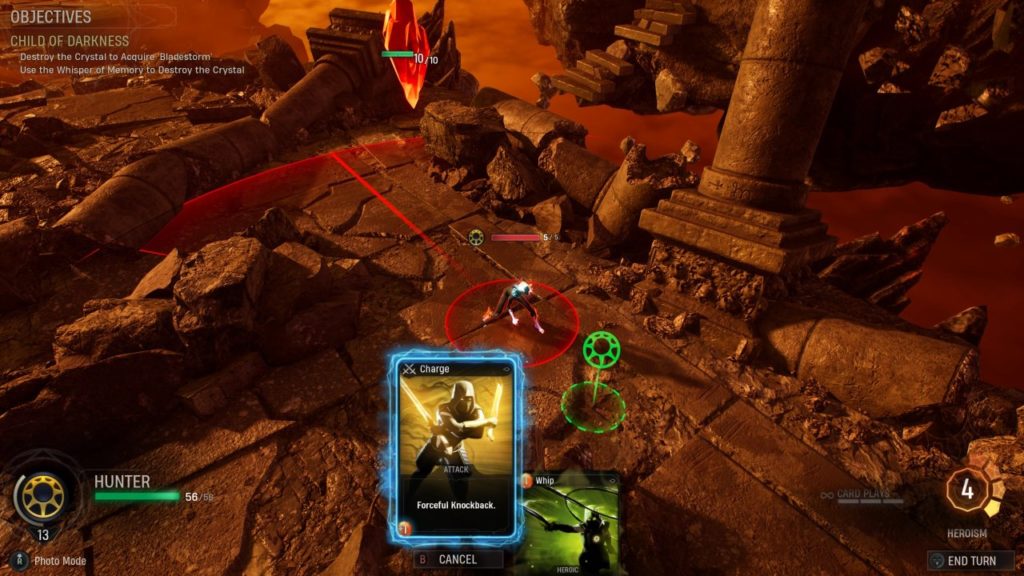 At this point there should just be you and the poor sucker you’ve been slinging around for a while left alive. Target him again, and use the final Charge card to knock him right back so he’s more or less beside the red crystal. Now use Whip, and smash him into the crystal to shatter it and acquire Bladestorm.

Now a new crystal will appear. Target it with Bladestorm to complete the challenge and receive your rewards. Check out the video below for a clear demonstration.

We hope this guide helps you overcome the Hunter Hero Challenge in Marvel’s Midnight Suns.

Senior Content Editor Mick has been playing games for over 30 years and writing about them for around 12. After drifting from site to site for a while, settling briefly at the now-defunct Made2Game and freelancing for the gone-but-not-forgotten NintendoGamer Magazine, he came at last to rest at Godisageek. Mick has been a reviewer, staff writer and content editor here for some time, while also moonlighting a little for Red Bull Games. He has 4 kids, has written 2 novels, and sometimes even manages to pay a bill or two. You'll usually find him defending the galaxy in Destiny 2, battling evil in Diablo 3, or lurking in the background on Twitter. Find him there @Jedi_Beats_Tank, or on XBL (JediWaster247), PSN (Jedi_Waster) or Nintendo (JediWaster).
MORE LIKE THIS
GuideHintsmarvelMarvel's Midnight Suns