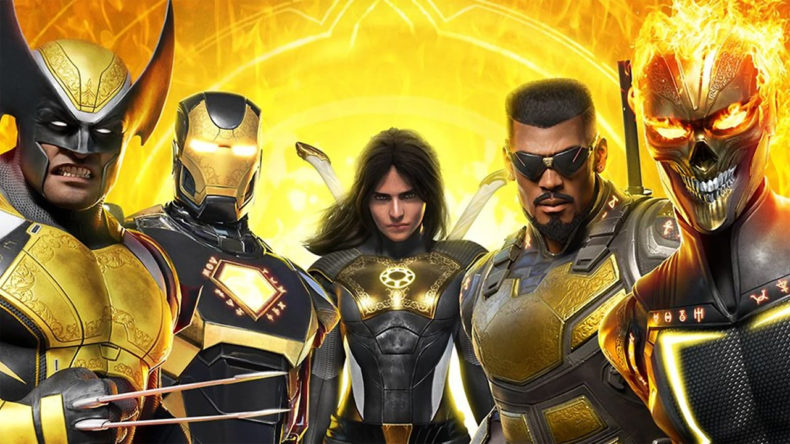 Marvel’s Midnight Suns is unlikely to have an easy go of it. It’s no secret that most Marvel-related properties outside the MCU or comics themselves struggle to gain traction with audiences. Video games in particular have always had a pretty rough time of it, with few notable exceptions such as 2021’s Guardians of the Galaxy. Ironically, the Marvel Cinematic Universe is mostly to blame. It’s such a behemoth now, encompassing so many movies, TV shows, web shorts, spin off comics, and in-universe specials, that it has built its own fanbase – one that overlaps less and less with that of the source comics.

As a result, a weird no man’s land now exists somewhere between the original material and the MCU, where characters must be bastardised to feel original, only to come under unfair scrutiny from existing fans. Writers struggle to tell original stories, or lean too heavily on the familiar – which causes its own problems, as Square Enix discovered with 2020’s Marvel’s Avengers. 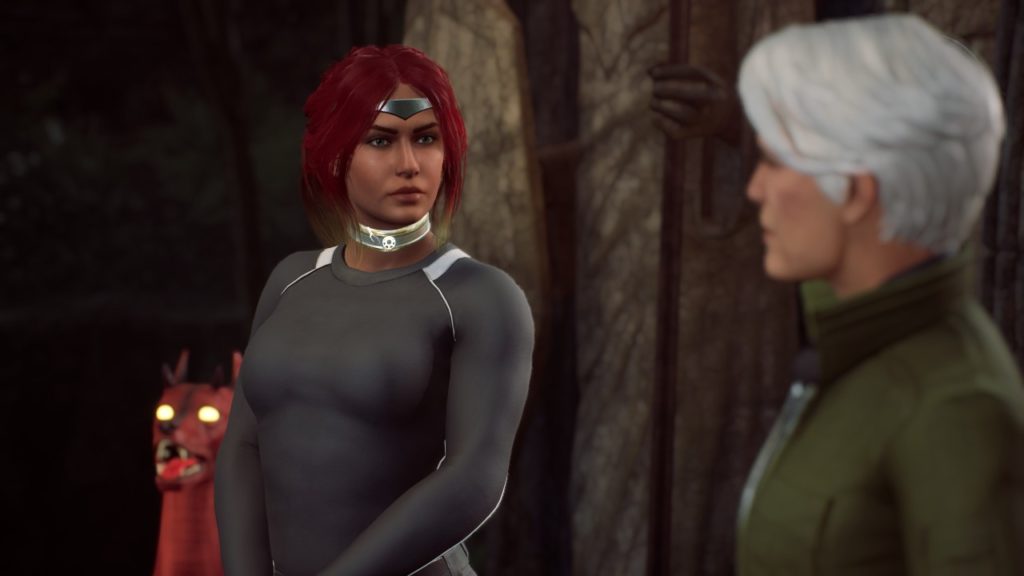 So what do you do? Risk writing something new, or pay exorbitant licensing fees to use character arcs from the MCU? In the case of Firaxis’ latest venture, you find a way to combine both, using the tropes and tones of the cinematic universe to tell a story based on an abandoned arc from the comics. It’s risky, but it also allows for a certain amount of creative freedom without the need to lean on either universe too heavily.

The result is Marvel’s Midnight Suns, a modern retelling of the Midnight Sons arc published in the early 90s. While it borrows the main antagonist from the run, it mixes the story with original and established elements to tell the story of Lilith, Mother of Demons, resurrected by Hydra and hellbent on restoring the Darkhold and summoning the big bad Elder God, Chthon.

To combat her, a band of heroes has come together composed of Blade, Magik, Robbie Reyes’ Ghost Rider, and the Runaways’ Nico Minoru. Led by the Caretaker, the new Midnight Suns make their base in the grounds of an eldritch Abbey and summon the Hunter, the child of Lilith who once stood against and ultimately defeated the Mother of Demons three centuries before. 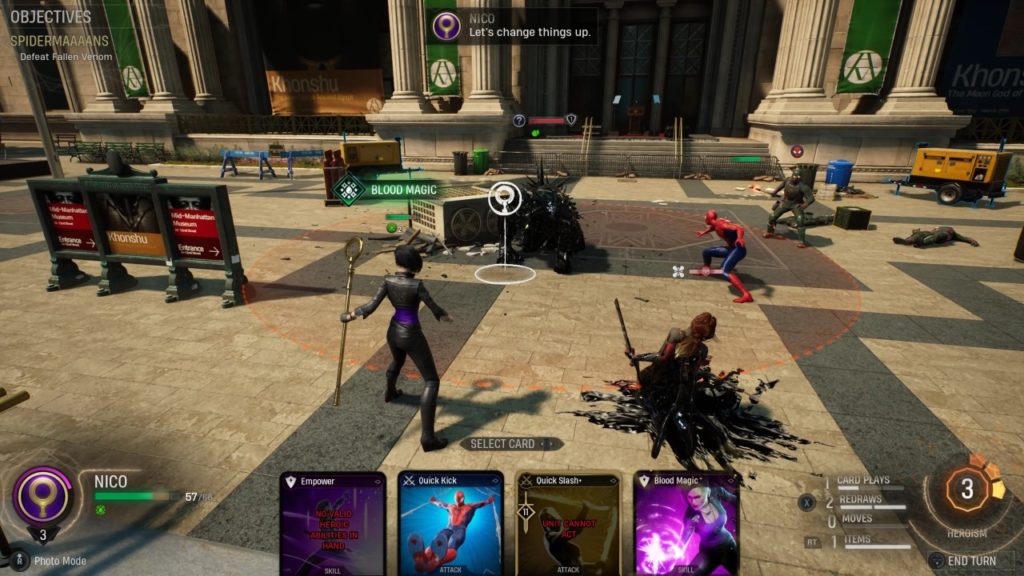 With the Hunter, Firaxis have introduced a unique, customisable character with which you’ll lead the Midnight Suns and their allies, including Iron Man, Doctor Strange, Captain Marvel, and Spider-Man. It’s an eclectic mix of characters from across the Marvel universe, all thrown together in a classic team-up style to battle the forces of Hydra and the demonic Lilin.

The story is surprisingly compelling, mixing thrilling battles and narrative twists with something like Big Brother: Marvel Edition. It’s a game of two very distinct halves, composed of an explorative RPG and a modified version of the turn-based tactics genre that Firaxis helped to originate.

As an RPG, Marvel’s Midnight Suns has an almost addictive loop. Outside of the combat you’re free to explore the Abbey grounds, uncovering ancient mysteries and hidden treasures with the help of the spirit of Agatha Harkness. In these moments, there’s no fighting, just you and your growing band of allies, and the Abbey itself. 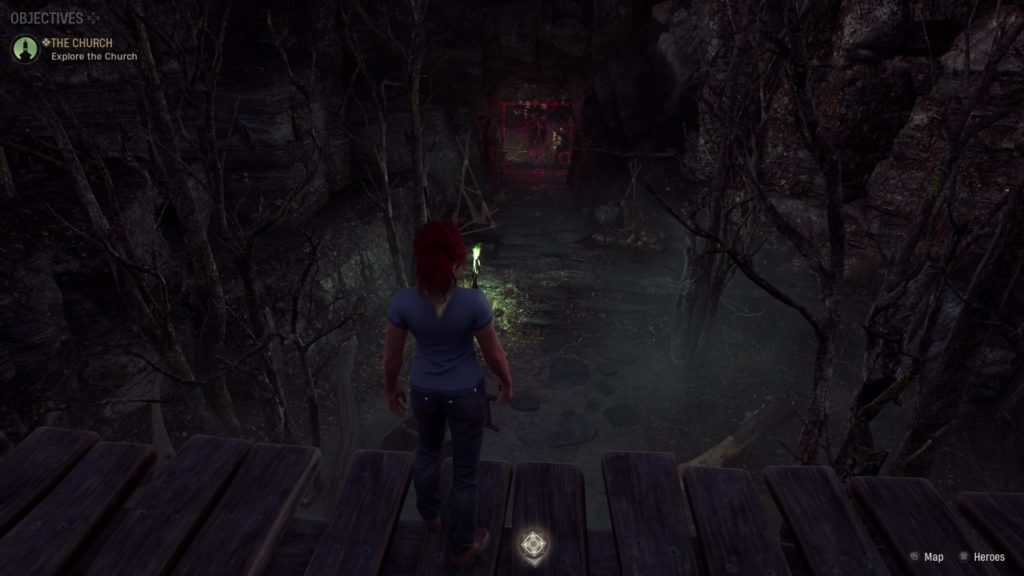 It’s a large open area, with a Metroidvania like vibe that sees you opening up more areas as you discover the ancient Words of Power, four spells tied to a forgotten quartet of Elder Gods that will reveal hidden pathways and shortcuts. There’s hours of exploration to be had, and some of the Mysteries have multiple stages, puzzles, and challenges. Your primary goal besides uncovering the history of the Abbey, the Hunter, and the Caretaker is the collection of Arcane Keys with which to open locked chests containing cosmetic shaders, special abilities, and rare items.

You can customise your room, modify your appearance, change your outfits, or design comic book covers just for the fun of it, and then display them in frames around the Abbey. It’s a bit odd from a narrative standpoint, but it adds a host of goals and rewards that make exploration feel worthwhile.

But the Abbey is also a base of operations, and in the Hellfire Forge Tony Stark and Doctor Strange will create magical and technological upgrades to allow, for example, the synthesis of combat items, new battle suits, and weapons to use against Lilith and her army of Fallen. Elsewhere, Carol Danvers runs “Hero Ops” and sends chosen superheroes out into the world to assist unseen but name-dropped characters like Shang-Chi, Jessica Jones, and Luke Cage with extra-curricular missions that reward you with new powers and XP. 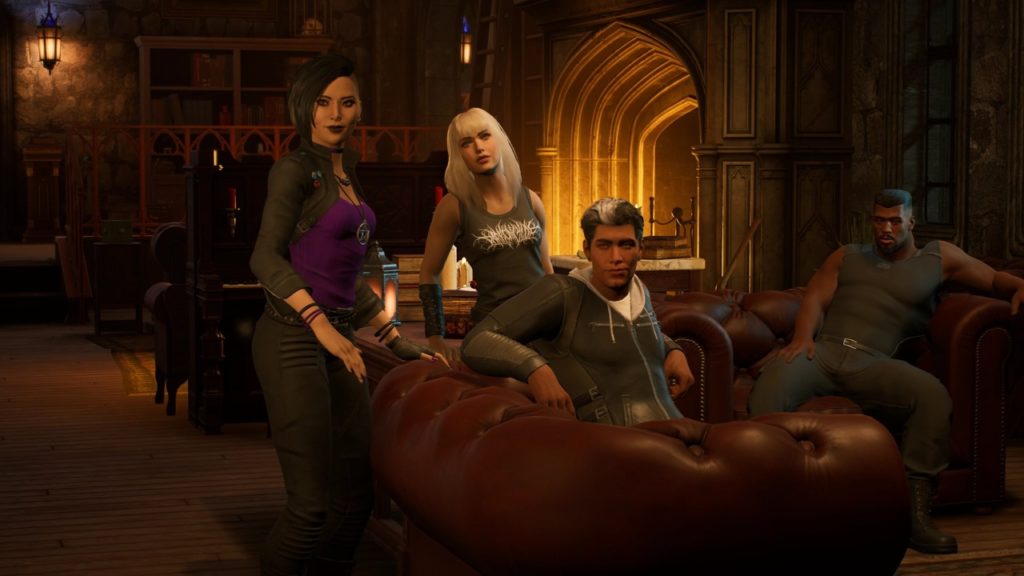 Finally, the Abbey acts as a hub where you can build friendships with your team, hanging out and conversing, getting to know them to develop their Friendship levels by exploring their interests or sparring in the training Yard. Each Friendship level unlocks new passive bonuses or suit shaders. There’s so much to do that it’s like a game of its own, and you could forget the combat element even exists at times. However, in order to advance the day to night you must complete a combat mission out in the world with three of your heroes.

Combat is a hybrid of Firaxis’ established turn-based tactics, and card collecting. Superheroes are unlikely to miss, so chance-to-hit is not a thing. Likewise, many can heal, or possess super strength and speed, or can wield magic and advanced technology. To even the playing field, you’re always outnumbered, and each turn will face fresh reinforcements. Each hero has a deck of eight cards, assembled from three types: Attack, Skill, and Heroic.

Attacks are offensive abilities like Blade’s sword strikes or Wolverine’s claws, but many have a knockback effect that sees you bouncing enemies off walls, explosives, other enemies, or even into heroes for high-damage combo attacks. Skills feature support abilities, like buffs from Doctor Strange or portals sliced into the air by Magik’s blade. And finally there are Heroic cards which call upon a hero’s individual powers to unleash devastating attacks or buffs. 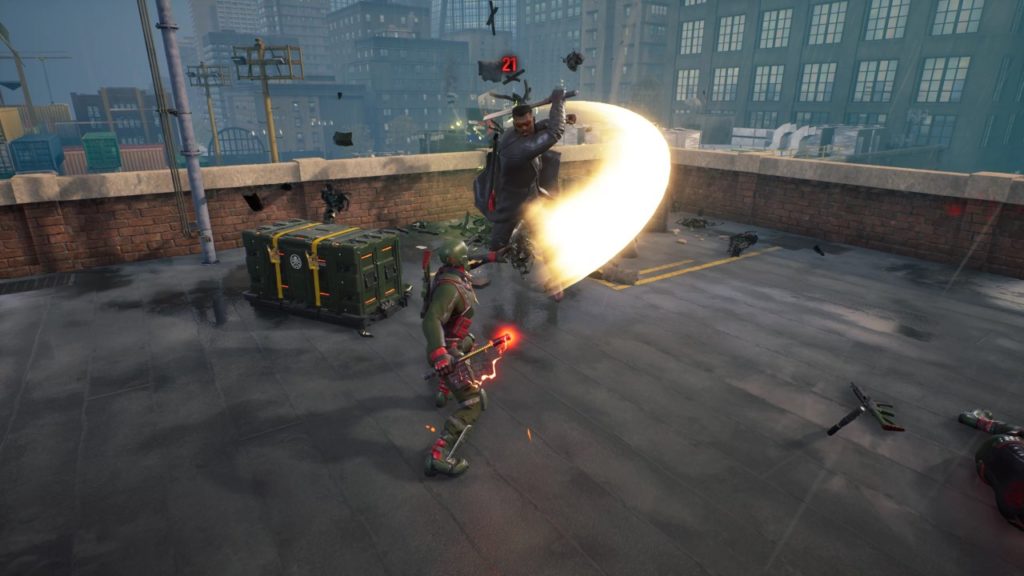 The tactical element is incredibly deep and varied. Each of the twelve heroes feels unique, bringing their own signature moves and talents to encounters. It’s a testament to Firaxis’ experience with combat design that there are simply no bad characters, and no bad combinations. Standard attacks and buffs build Heroism, which is used to power Heroic cards or exploit the environment. While you can only play three cards per turn across all your heroes, environmental attacks and special card conditions allow for more moves and tactics. Positioning plays a part, although you won’t need to worry about cover or moving each turn. Every character can use the whole arena without penalty – these characters can often fly or teleport, after all.

A variety of mission types keeps the action fresh, whether you’re capturing Hydra agents, defending mainframes, or battling against hordes of multiplying Lilin demons. The campaign is long, featuring a number of multi-stage boss fights against corrupted villains like Sabretooth and Venom. Each of these encounters forces a rethinking of tactics and strategies, and even on Normal difficulty there are challenge spikes that will test you. 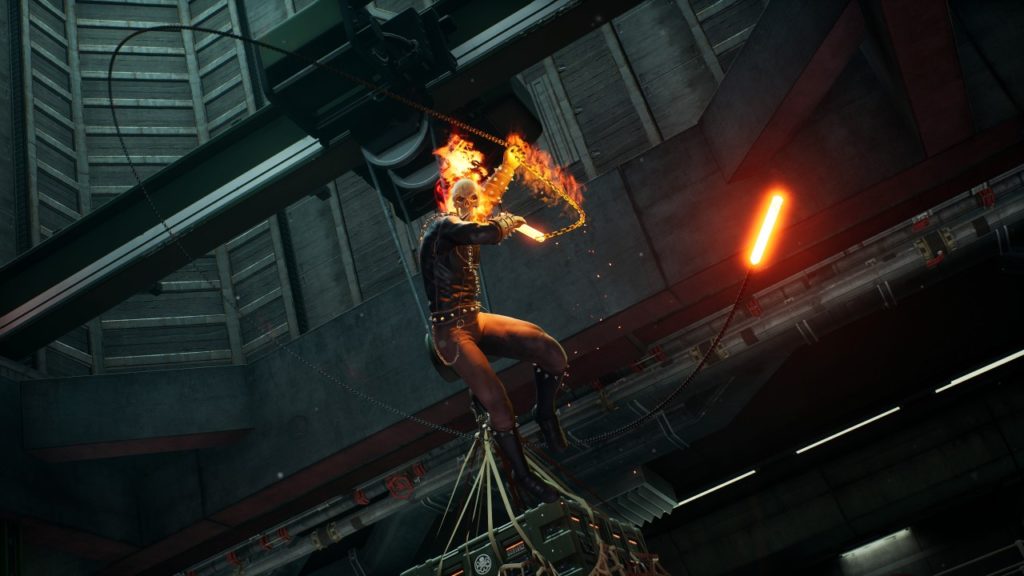 It’s hard to overstate how incredible the combat feels in Marvel’s Midnight Suns. Battles are fast-paced and dynamic, and the mix of enemies, objectives, arenas, heroes and cards makes for a huge amount of variety. The late-game fights really pile it on, adding turn-by-turn corruption damage, randomly invading bosses and multiple hazards. My only complaint is that it never seems to stop tutorialising things, even when you’ve captured ten Hydra agents, it will tell you when the option is available. It can occasionally hamper the pace a little, but it’s nothing game-breaking.

What is occasionally game-breaking though, is the horde of bugs and glitches that plague Marvel’s Midnight Suns. Firaxis games always have a certain amount of jank, but Midnight Suns has some really intrusive performance issues. From weird visual effects over the screen text, to disappearing context prompts, the glitches are annoying but manageable.

However, I had one bug that dug in early on and remained for the entire game that outright prevented me from adjusting one of my heroes’ card decks without forcing a hard-quit to desktop. Hopefully it will be patched out after launch, but right now it’s something I can’t ignore despite the overall quality elsewhere. 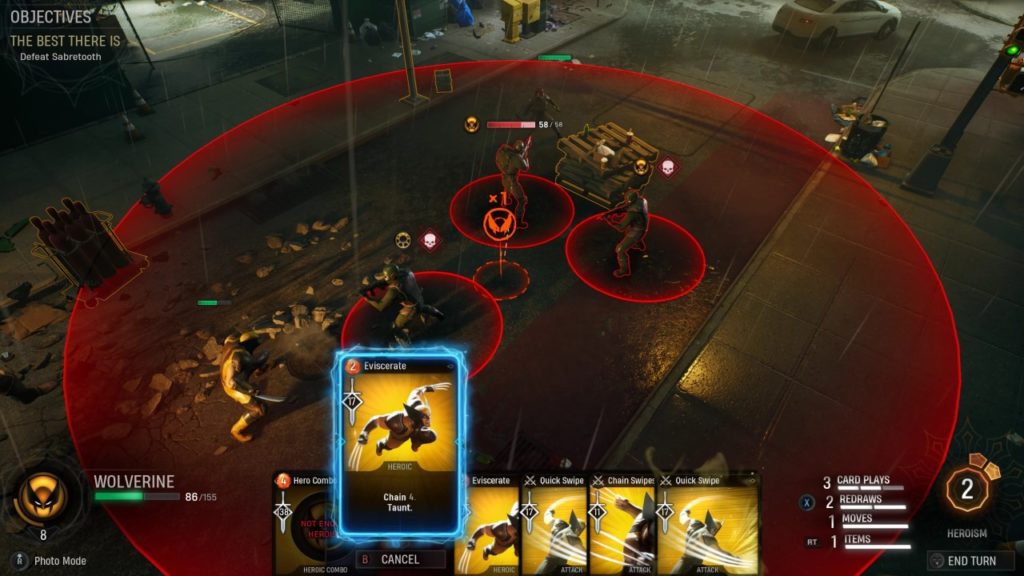 While the Abbey exploration is a definite highpoint, the interactions with other heroes can throw up small problems and inconsistencies. For a start, characters have an annoying habit of teleporting around. One moment you’ll be talking to Captain Marvel by the pool (yeah, there’s a pool), and then you’ll wander up a few steps and find her working out in the Yard. Characters are never in two places at once, but it seems that way by how quick they move around the Abbey.

I could do this all day

Your mileage with the super-friends will likely vary based on how resilient you are to the trademark Marvel quippiness. The rapid-fire dialogue is well written, and characters have noticeable, sometimes significant arcs within the primary narrative, but the constant in-fighting often falls into battles of snarky swipes and jibes.

For fans of the comics or the MCU, though, Midnight Suns is heaving with in-jokes, Easter Eggs, cheeky nods, and outright fan-service. The Abbey is a treasure trove of hidden secrets, and there’s massive depth in modding Ability cards, crafting combat items, and earning the resources needed to combine and upgrade your duplicate cards. Add to this the hours and hours of exploration around the expansive Abbey grounds, and a combat system that makes you feel like you’re leading a team of superheroes without making you feel too overpowered. 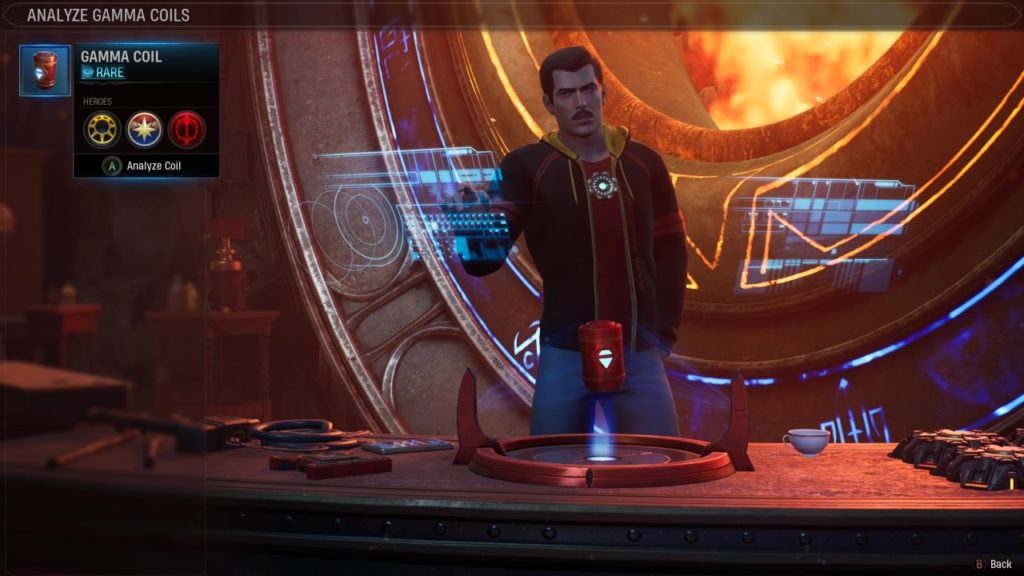 Graphically, it’s good-looking but not mind-blowing. Character models have comic-book proportions, and while the environments are detailed enough, few stand out in the memory from mission to mission. There’s also a certain amount of excess weight, with some underused areas in the Abbey that seem to exist just to make you travel to them (Robbie’s workshop is a prime example). The same can also be said of the story at times, with a bit of a case of Cliffhanger-itis leaving story arcs unresolved for hours at a time – sometimes so long you almost forget they existed.

There’s also a marketplace, though it isn’t live at time of writing so it’s hard to say what will be sold in it or how the currency will be earned – if it’s earned at all. Already announced DLC characters hint at a hybridised live service model, which won’t please everyone but will at least allow Firaxis to keep making new content and supporting the game post-launch.

Small complaints aside, what Firaxis has achieved here is pure alchemy. Bugs notwithstanding, Marvel’s Midnight Suns is the best superhero game I’ve played since Insomniac’s Spider-Man. Not only that, it genuinely breathes new life into a genre that has become uncomfortably overcrowded by so-called XCOM-clones.

That Firaxis are the bosses of this genre hasn’t been this clear since the launch of XCOM: Enemy Unknown. They’ve ripped out the insides of their own machine and replaced it with an Adamantium skeleton, then given it a little hotrod-red for the hell of it. It’s fun, flashy, and silly at times, but also incredibly deep and strategic where it counts. It’s a sprawling beast of game, and once again proves that Firaxis are the undisputed masters of their craft.

Some bugs and glitches

With Marvel's Midnight Suns, Firaxis has ripped out the insides of its own machine and replaced it with an Adamantium skeleton, then given it a little hotrod-red for the hell of it.