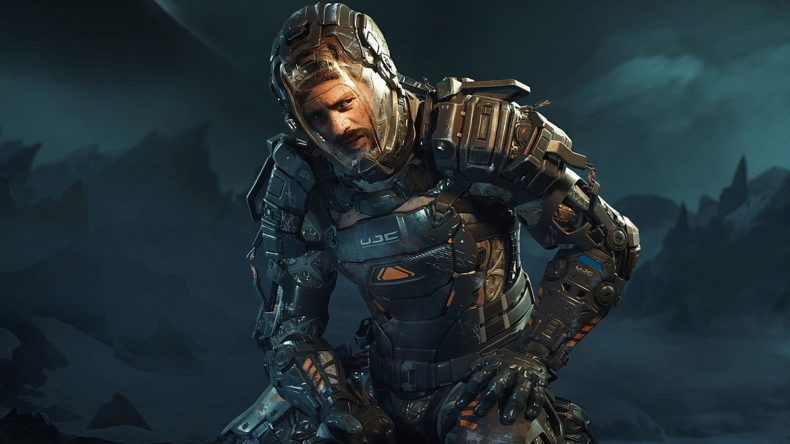 For eight hours, I never got used to the hell I found myself in. I was never calm or comfortable in my surroundings, I was never at ease or in control. The Callisto Protocol is your worst nightmare come to life. It is punishing and anxiety-inducing, and it never lets you breathe. This isn’t Dead Space. While there’s clear inspiration from the iconic horror series, it manages to make use of what came before it while thrusting you into one of the most terrifying and brutal games you’re likely to play for a while.

After crashing onto Callisto, one of Jupiter’s moons, you’re thrown into Black Iron Prison and forced to survive long enough to escape the horrors and dark secrets buried within. Jacob Lee, played wonderfully by Josh Duhamel, appears to be in the wrong place at the wrong time, and after everything goes to hell, you’re left fighting to survive against monstrous beings – humans mutated beyond recognition – filled with an overwhelming rage. 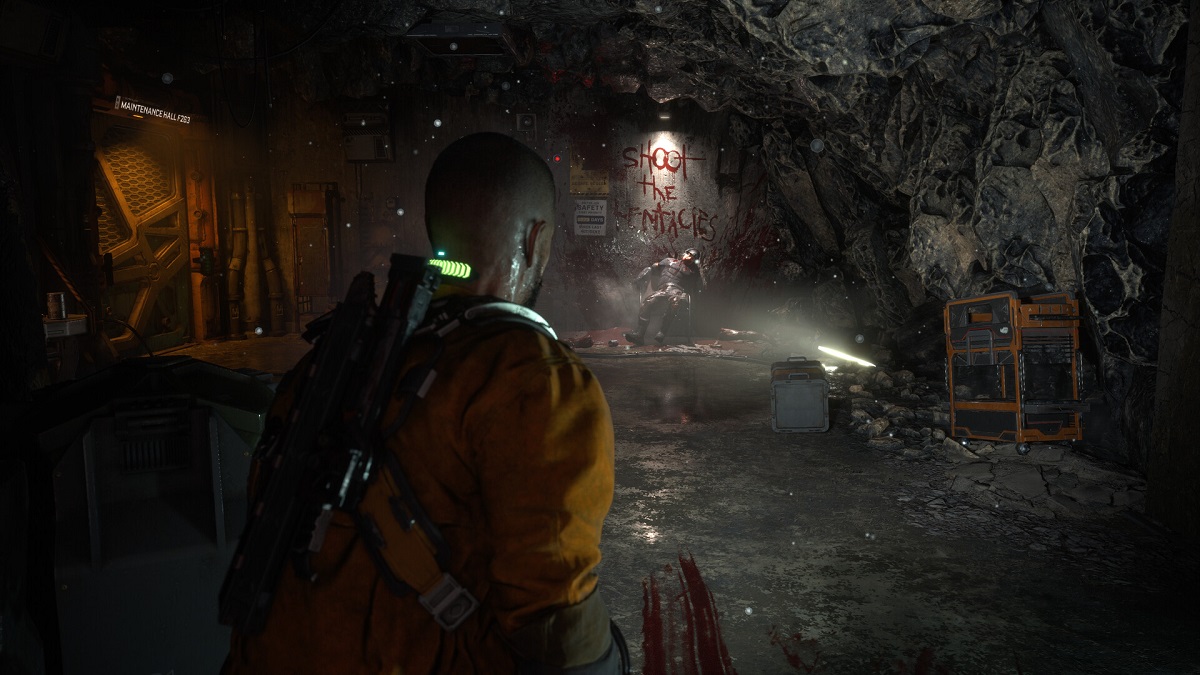 Striking Distance Studios has managed to perfect the art of survival horror. There wasn’t a single encounter with an enemy I thought I would easily kill. Even the most simple form of creature posed a threat, and this fear of fighting stayed with me until the end. I’ve never played a game before where every enemy made me uncomfortable, and if I could avoid every monster in the game, I would. With every new area, a different version of these creatures would appear, more deformed than the last. Some spit acid at you, some drag their bodies across the floor and explode, and some are much quicker than others.

You’re constantly trying to adapt in order to fight them, and whenever there were more than two approaching you, it posed a significant challenge. The developers respect the intelligence of the player, rarely relying on cheap jump scares, but rather an impending fear of each new encounter. You’ll likely expect the monsters to pop up, but it never becomes familiar, and when hearing the clanking of pipes or grotesque squelching and screams coming from close by, it won’t matter how prepared you are. The atmosphere created throughout The Callisto Protocol is far superior to any horror game I’ve played, brought to life by stunning visuals and sound design.

Lights will blink, and steam blinds you in tight corridors where you might think you see something, yet you’re not quite sure. Panic is created by how well the prison is designed, but there’re other locations that build fear in other ways. Another area, out in the wintery conditions of the moon, you’ll see frozen creatures that may or may not break free and attack you. Sometimes they don’t, and it is these examples that don’t belittle you. Like I mentioned earlier, Striking Distance aren’t assaulting your intelligence; they’re trying to push the boundaries of what horror games can be. 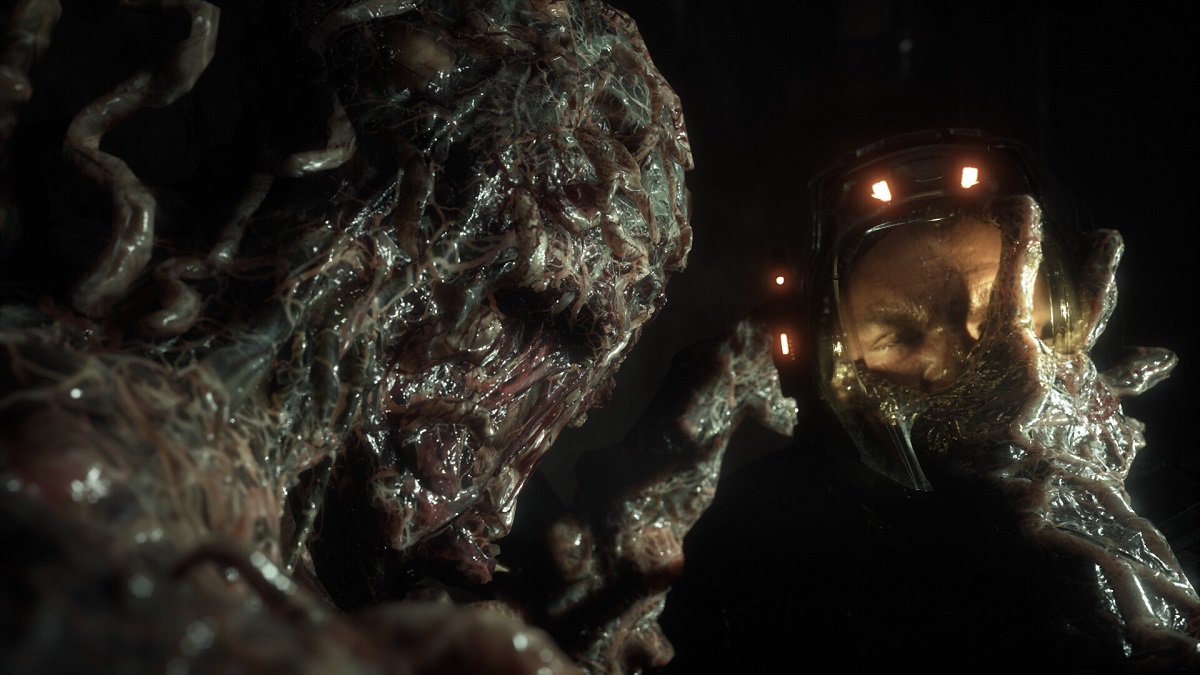 When you first start playing The Callisto Protocol, there’re two key items that you’ll use to defeat the creatures you encounter. One is a stun baton that can beat them down, and the other is the GRP: a gauntlet that can be used to send them flying through the air. Combat is intense and intimate, and one wrong move can be costly. The GRP is powered by batteries which can be found in chests, and as long as you have them in your inventory, it’ll recharge once one runs out. It’s a great tool that can be used to create distance, send enemies flying into walls covered in spikes, or into turning mechanisms that’ll crush them in an instant.

Making use of your baton and GRP is vital to survive, and paying close attention to your environment can help dramatically to defeat the gruesome lifeforms. I won’t spoil it, but one area within the prison had something both disgusting and ingenious that it left me morbidly curious when making use of it to kill enemies. Throughout The Callisto Protocol, you’ll unlock new weapon schematics that can be crafted at Reforging Stations, along with new upgrades for your stun baton and your GRP by collecting Callisto credits. Credits are scarce, so you’ll often find you won’t be able to unlock everything in your playthrough.

The Callisto Protocol is tough, and fighting the various monsters will push you to the utter limit. Due to the close camera, fighting more than one enemy can be overly difficult when it doesn’t need to be. You can’t focus on enemies, so if one tries to blindside you, it’s impossible to know where they are coming from, and can result in an unexpected death. If the camera wasn’t as zoomed in as it was, it wouldn’t be as terrifying, but when you can’t see what you’re doing at times due to so much blood and guts splattered across the screen, your vision is impaired and makes for unnecessary failure. 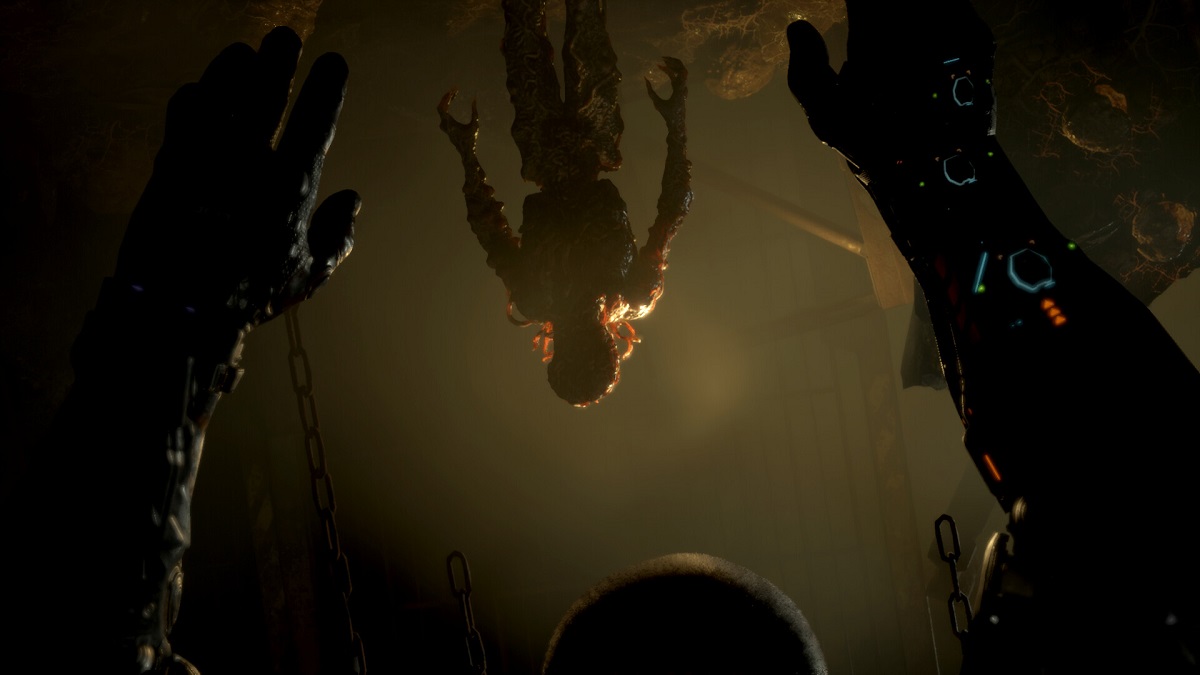 You have the ability to dodge attacks and block attacks, but when you do, there are times when you’re up close to Jacob’s body that you can’t always see where the next strike is coming from. This had me turning the difficulty down. Not because it was hard to dodge or strike, but because I couldn’t always see where the next enemy was coming from or it was too close to the action, and when it sometimes only takes a couple of attacks to die, it became more frustrating that it needed to be. The death animations are absolutely brutal. I had my arms and legs ripped off, my face bitten and chewed up, and my head pummelled so hard it burst in on itself. The Callisto Protocol is for masochists, unrelenting in its brutality.

The Callisto Protocol drip-feeds you with story until some big reveals in the final third, and while I wasn’t particularly playing it for its plot, there’re some interesting reveals. The acting is great, with a special nod to Karen Fukuhara from The Boys who gives a great performance. It’s a stunning game in both the animations and how it creates a tense and scary atmosphere, and the sound design is excellent. While it can be more difficult than it needs to be due to zoomed in camera angles, I won’t be forgetting it in a hurry. It’s disturbing, savage, and forces you to survive in the worst possible conditions.

The Callisto Protocol is violent and brutal, with stunning visuals, but it's intimacy causes a few problems that are hard to be overlooked.