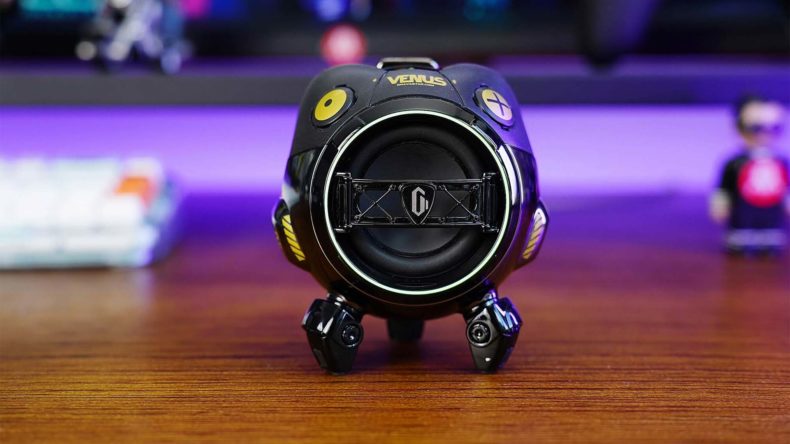 The GravaStar Venus. The smaller, more compact speaker in the GravaStar series. When you open the box you are met by another robotic look like that of the Mars Pro. Portable speakers usually are very hit or miss in quality and battery life with even giants like Apple have not ventured into this market with the HomePod due to it not having an internal battery, so a good portable speaker is always pleasant to find.

The first impression I had when opening the box to see it for the first time was simply “Wow, this is cool”. It matches its sci-fi aesthetic with the Mars Pro and obviously has no needed wires unless a charge is required. The design is sleek and polished. That being said it has a surprising amount of weight on it (450g) for a portable speaker, but is definitely not heavy enough to discourage any carrying around of the sort. The four buttons (Sound up, down; power, and Bluetooth) are all integrated terrifically and in a way that does not affect how the speaker looks, which is somewhat of a trait of the GravaStar series. 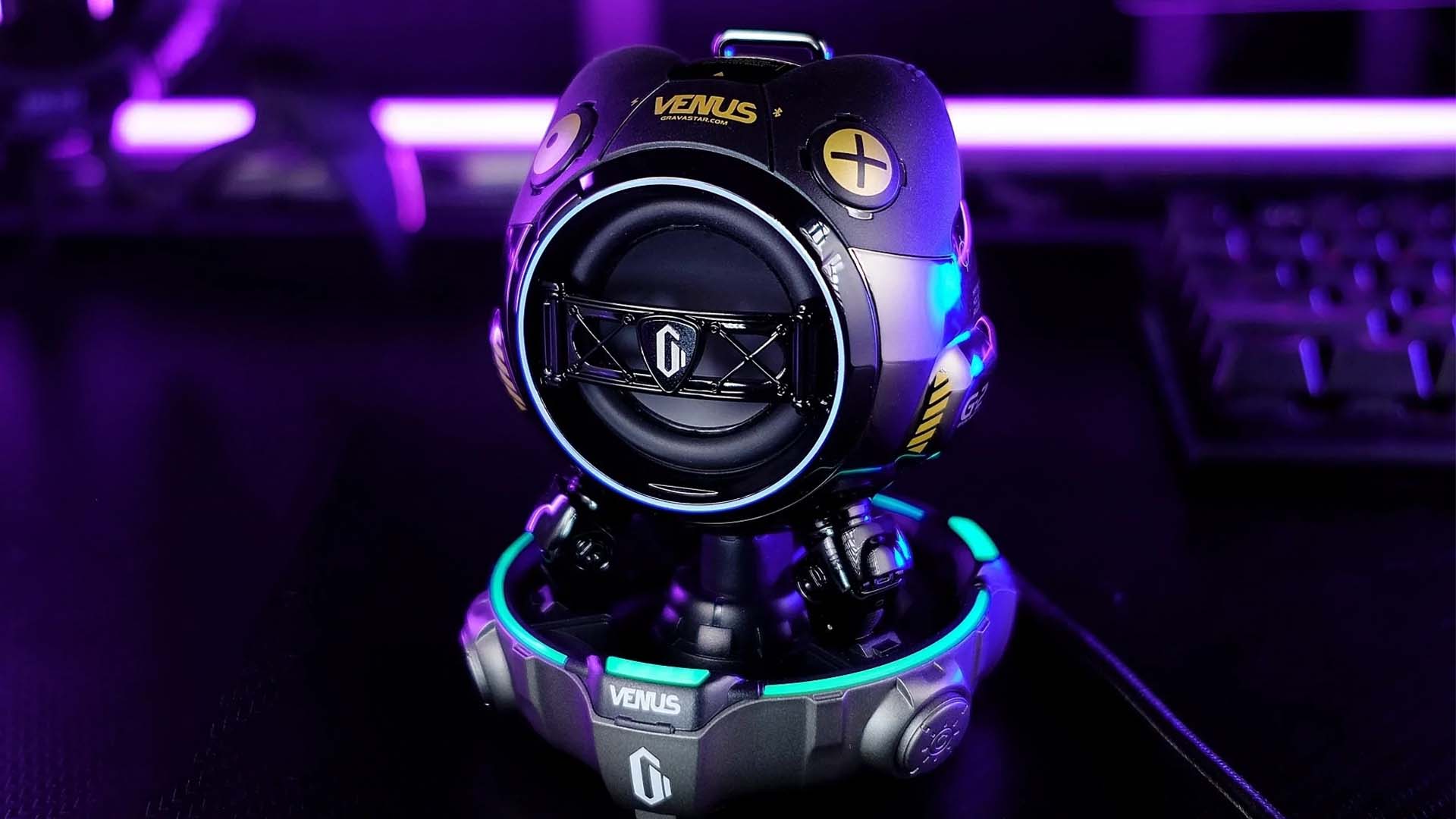 In terms of sound quality it is stellar, especially for something so small. Similar to the Mars Pro, at full volume the audio is still crisp and remains undistorted which is an issue other speakers do have frequently. The bass on it is not overbearing but also does still hit fairly hard without impacting anything else sonically as all of the audio sounds crisp and clear. I tried a multitude of things on it such as games, audiobooks, and obviously music. All of these sounded pretty much perfect. It does have a couple potential drawbacks though.

One is that gaming on it may not be ideal due to a very slight delay in audio as it is Bluetooth. In addition sometimes depending on the voice pitch reading an audiobook it can be slightly muffled due to the bassy nature of the speaker but it is really nothing too major to kick yourself over, should you buy one. The other, albeit not common, is I have experienced a couple inconsistencies in volume where sometimes it would not be very loud or the bass would overpower other parts of music. However, this was typically fixed for me by either reconnecting or just turning the speaker off and back on again. Still though, it has a rough eight hour battery life, but I have frequently had it on for longer than that which only attests to its quality.

Just like the Mars Pro, it can connect to anything via Bluetooth which is still very neat. Especially as items like the HomePod mini are only compatible with other apple devices via the finicky airplay method. It also does not perform strangely with any apps unlike the HomePod with Spotify, all audio from your device comes through the speaker. 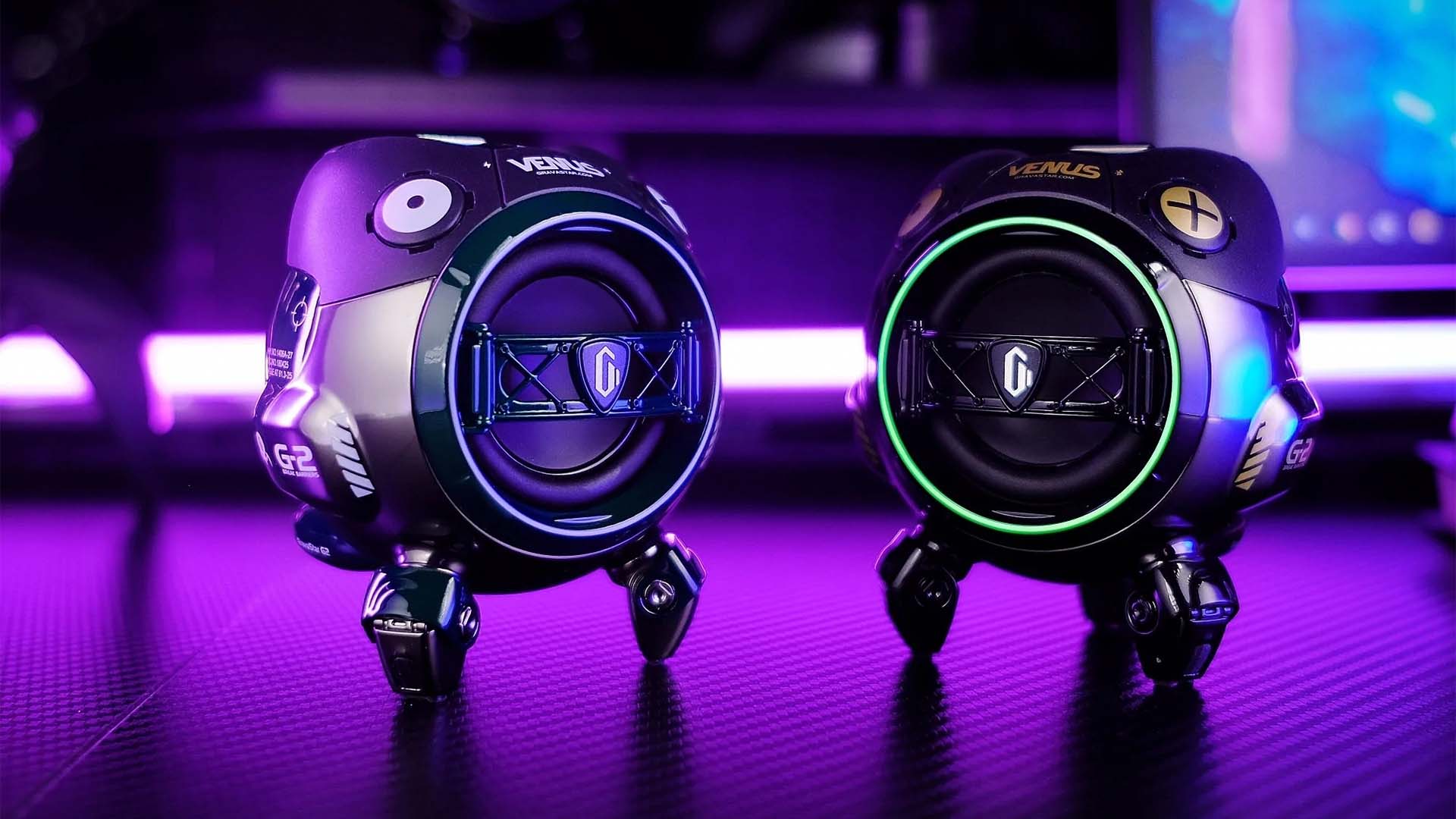 The price is quite favourable too, at regular price of $89.95 (currently on discount for $62.97), you cannot go too wrong especially when looking at its comparisons like the HomePod mini which is priced between $89-$99 and with none of the drawbacks from something you would expect from an apple exclusive product. There is one speaker similar to the special edition Mars Pro which is the Venus – Elektra priced at $129.95, which has an awesome design including the accessories of a shield and a Gatling which is entirely customisable.

The Gravastar Venus is an incredible piece of kit for listening to music on and a superb portable and standalone speaker. It’s design is also a huge plus due to its sleek appearance and uniqueness. All this and not being particularly expensive, while being considered an entry level speaker for some, I feel that this is truly a great piece if you don’t mind the incredible rare inconvenience of having to restart it. Even the battery life is also a massive plus for something so small and that charges via USB-C.

Audiobooks can sound muffled due to bass
Sometimes requires a reboot

The Gravastar Venus is an incredible piece of kit for listening to music on and a superb portable and standalone speaker.