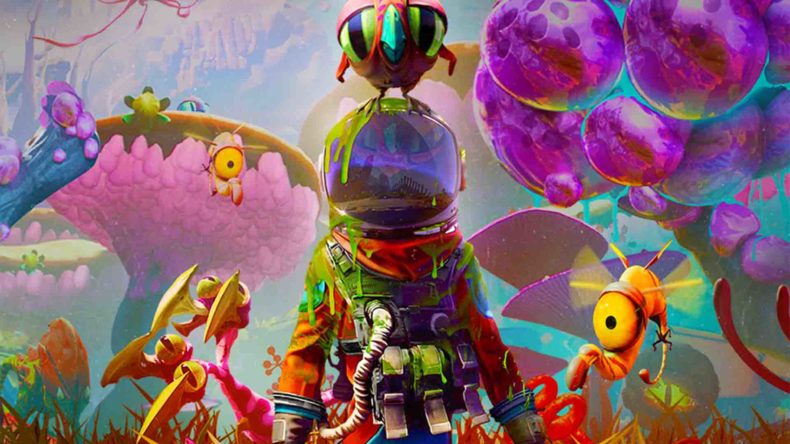 This new version of Journey to the Savage Planet brings the Hot Garbage DLC, extra conversations with Martin Tweed, 4K support (performance mode and graphics mode are the options as usual), and an even better photo mode. It’ll cost £24.99 when it comes out on Tuesday, February 14th on PlayStation 5 and Xbox Series S|X, and is being published by H2 Interactive on PlayStation in Asia.

As you might already know, Kindred Aerospace is responsible for determining the viability of human life on planet ARY-26. Data suggests the planet’s atmosphere may have hallucinogenic properties, but as you know, we have a strong anti-drug policy. Learn about the planet’s undiscovered flora and fauna and document the bizarre life forms our researchers have scientifically classified as “icky.” Conduct research with the standard tools of the trade: laser pistols, bombs, acid, and other explosives or requisition ARY-26’s resources to create tools using 3D printing technology. Just remember that your benefits don’t include health insurance. You die, it’s your fault, Valued Employee.

“We’ve been through an acquisition, we’ve been made redundant, we’ve formed a new company, and reacquired our IP, but some way, somehow, the Employee of the Month Edition of our wacky game is finally coming to new consoles,” said Alex Hutchinson, Creative Director, Raccoon Logic, weeping only a little. “Thanks to everyone who supported us, especially you, Value Employee. You’re my favourite, whatever your name is”.

Originally released in January 2020, the game did come to Nintendo Switch later that year, in May 2020. We gave the Switch version a 7.5, though we scored the original release an 8/10, saying it is “a much more focused experience than a lot of exploration games and, while you can waste time exploring every nook and cranny – and indeed, you’re rewarded for it – there’s more of an onus on improving and upgrading so that you can reach the next area or return to previous ones with your newfound powers like Metroidvania. However you choose play, solo or with a buddy, there’s a lot to get stuck into and risking your life on the savage planet is never less than charming, entertaining fun”.

Editor-in-Chief.
MORE LIKE THIS
505 gamesJourney to the Savage Planet