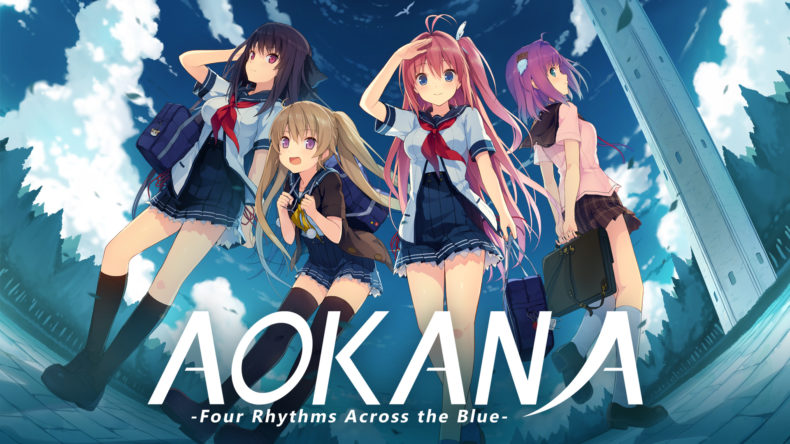 Despite not being a fan of sports, I’ve always enjoyed it when physical competition is used as the backdrop for a story. Be it Mighty Ducks, Happy Gilmore or Coach Carter, there’s something about the build-up to the big match that I love in Sports Fiction. Although sports games are often more simulation-based these days, there are still some heavily story-based games with a backdrop of real-world or fictional sports. Be it Football or Blitzball, I’m always happy to help guide my team to victory while hearing about their daily struggles. There are no balls in sight in the world of Aokana: Four Rhythm Across the Blue, though, with the aerial sport of Flying Circus taking centre stage in this visual novel.

Aokana (based on the anime of the same name) tells the story of Masaya Hinata and his tumultuous relationship with the sport of Flying Circus. After an early love of the aerial sport played with Grav Shoes was shattered by a traumatic event, Masaya vowed never to play Flying Circus again. Fate had other plans for our school-going protagonist, however, and a chance encounter with the new girl leads him into coaching the dishevelled Kunahama Academy Flying Circus team.

In the world of Aokana, the discovery of anti-gravitrons led to the creation of shoes that enable their wearers to soar through the air. As well as revolutionising personal transport, Grav Boots also took over the sporting world thanks to Flying Circus. In an FC game, two players compete to earn the most points as they race to touch four floating buoys in the sky. As well as earning points for reaching a buoy first, FC players can also boost their score by touching their opponent on the back. This high octane, full-contact sport translates really well to the visual novel genre, with matches often becoming personal affairs due to their one-on-one nature. 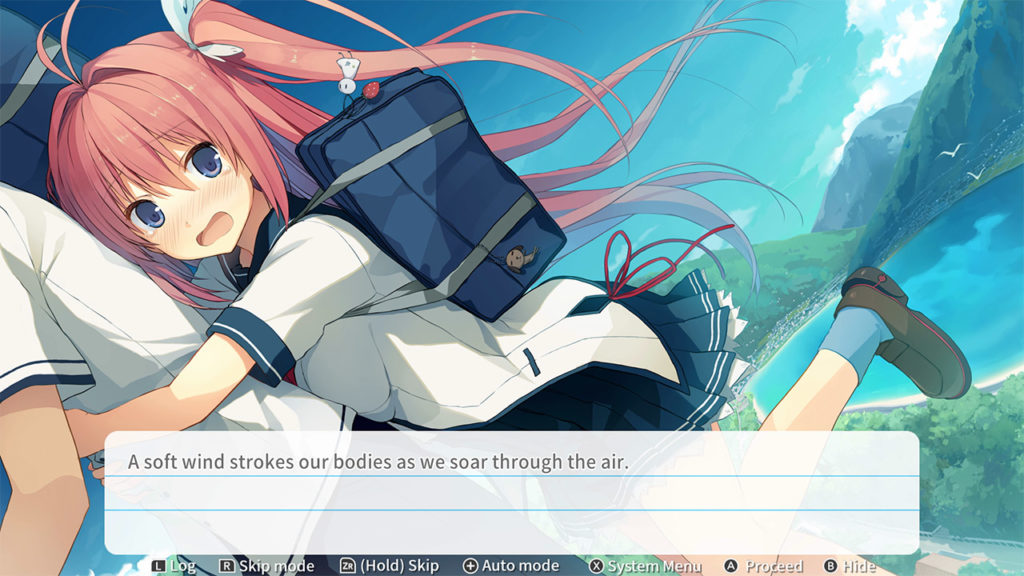 Aokana is one of the purest visual novels I’ve ever played. Actual gameplay is kept to the absolute bare minimum, with the only agency you have over the story being the occasional conversation option. Even these narrative decisions are few and far between (with roughly one opportunity to influence the story every 20 minutes) and because of this, it isn’t easy to tell how big an effect they have on the overall story. If the story grips you enough and you don’t mind reading taking the place of mechanics though, this won’t really matter.

There are some incredibly likeable (and some detestable) characters throughout the game that you’ll get to know during your time as an FC coach. The new girl Asuka had never even heard of Flying Circus before moving to your city and serves as the perfect excuse for the characters to explain the ins and outs of the sport so you understand what’s going on. Her journey from excited new player to airborne prodigy is actually quite heartwarming, as she’s just so positive and likeable. The other members of the team are just as enjoyable to spend time with, from the Udon-obsessed Misaki to the macho muscle worshipping president of the club, you’ll have plenty of time to get to know them all in Aokana’s surprisingly long runtime.

Unfortunately, you won’t just be getting to know your classmates on a personal level, as there is a disturbing focus on the physical form of your female peers. Be it peeping through a changing room window or watching an impromptu water fight, you’ll be subjected to a lot of flesh and some entirely unpunished toxic behaviour. Despite the fact you are all in school, there is a disclaimer at the start of the game that mentions that all characters are aged 18 or above. It’s obviously not realistic for them to all be this age, but I guess it’s maybe better than the alternative. 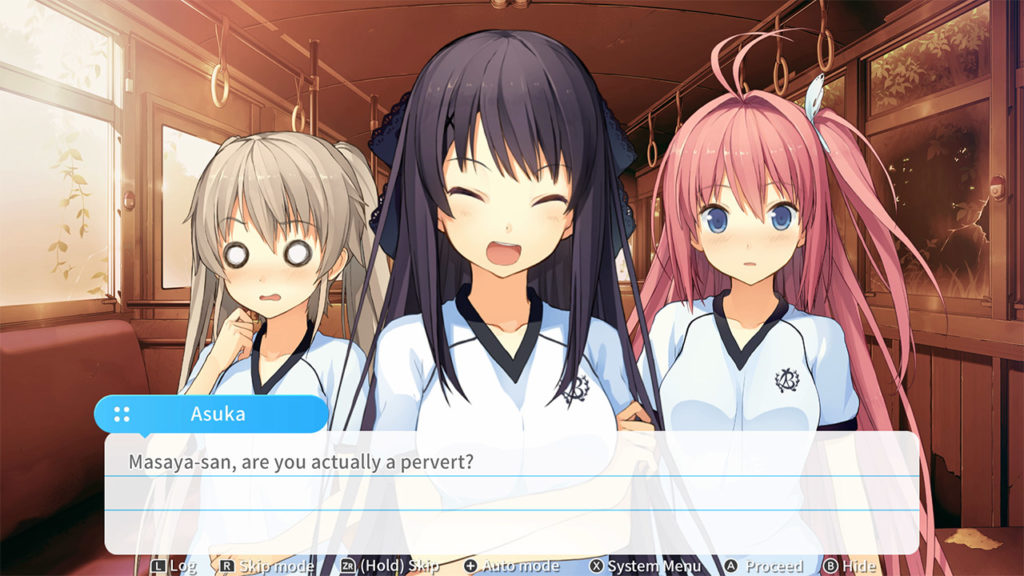 When you aren’t having barely covered boobs thrust in front of you, the anime art of Aokana: Four Rhythm Across the Blue is very appealing. The island town is a tropical paradise, and its inhabitants expertly designed. The soundtrack is a joy to listen to as well, with a pleasant mix of chilled out tunes and tense tracks for the frantic flying battles.

Aokana: Four Rhythm Across the Blue tells an enjoyable story packed full of all the thrills of the sci-fi sport of Flying Circus. The characters are charming (if overly sexualised and put in awful situations) and the writing is top quality, but if you’re looking for anything resembling gameplay here you’ve come to the wrong place.

Aokana is an entertaining Sci-Fi Sports Fiction story, that is ultimately hard to stomach due to a plethora of lewd and toxic moments packed throughout.