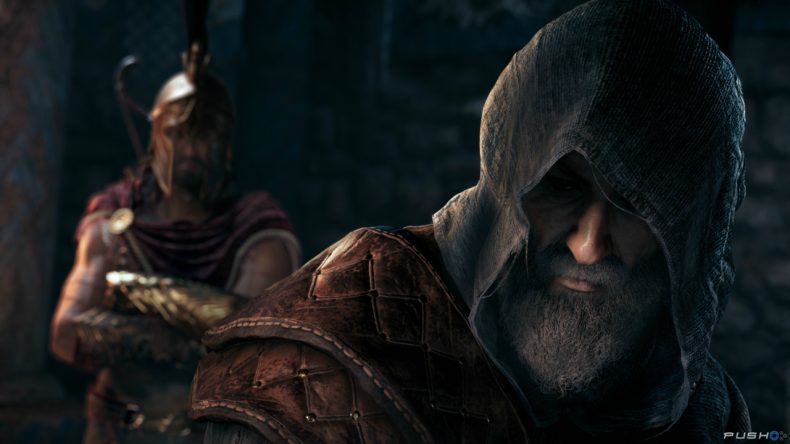 There’s a crucial point in the story of the first Assassin’s Creed Odyssey DLC, Legacy of the First Blade, where Kassandra is forced to face the consequences of her campaign to take down the Eyes of Kosmos and reunite the family that was stolen from her as a young child. Arriving at the location one of the many quests takes her to, she is faced with the family members of those she has killed in the pursuit of vengeance, and is forced to consider the impact of her actions. It is an interesting mirror of some of the main game’s themes that Socrates has you questioning, but now rather than the value of free speech, you are asked to consider the nature of fate and who decides what is good and evil. It is a shame then that this moment of enlightenment for Kassandra isn’t pursued further and the DLC descends into a microcosm of the larger game, where most of the systems it employs seem to get in the way of the story it is trying to tell.

And what of the story? Upon loading into your game you are automatically presented with a new quest. You receive a mysterious letter that asks you to come to Makedonia to provide assistance as “innocents are dying”. For practical reasons you will need to have completed Chapter 7 of the campaign and be at least level 29 in order to start it as Makedonia is a higher levelled area. Upon arrival you see a number of civilians burning to death and immediately you begin to investigate. Your actions catch the eye of Natakas and his father Darius who wields a mysterious hidden blade. Long term fans of the Assassin’s Creed series will recognise Darius as one of the earliest Assassins, credited with killing the Persian King Xerxes, and meeting him is an interesting prospect, particularly as the shadowy cabal he is tracking is the Order of the Ancients. However, in the setting of Peloponnesian Greece it seems a little out of place to arrive in a Spartan controlled area as the grand-daughter of the fabled Leonidas to find it overrun with Persians manipulating the local populace. Of course, the nature of Assassin’s Creed Odyssey could mean that Makedonia is under Athenian control when you arrive, particularly if you have engaged with the territorial battle mechanic and helped change leadership, but there is no escaping that it feels odd to have a sworn enemy of Greece traipsing around the region. This feeling is further compounded by the Mercenaries mechanic that seems to have been dialled up for the DLC. During the course of the story missions in Legacy of the First Blade you find yourself infiltrating military camps for secrets, investigating a mysterious sickness in a village and unmasking the various members of the Order of Hunters lineage of the Ancients. The problem is, while doing all of this you are still subject to the rules of the game, so if you are seen to murder or steal you will have a bounty placed upon your head and a powerful mercenary will track you down. This is all fine, except when you unmask a traitor in front of the magistrate and in full view of the village, are pulled into a fight to the death with them and their guards, and upon the first kill have a bounty placed on your head for murder, meaning that a nearby mercenary is now intent on bringing you down whilst you battle a powerful Order member.

Every task that you do to assist Darius in wiping out the Hunters branch of the Order of the Ancients puts a price on your head. Some of this story disconnect is rationalised a little with you finding out that the Order members have been spreading tales that it is an eagle bearing misthios that is causing all the misery in Makedonia, however it makes the practicality of playing the DLC a frustrating blend of either clearing all bounties before embarking on a mission with the full knowledge that you will have a further bounty to contend with at the end anyway, or acknowledging that in all likelihood you will have to also deal with a powerful mercenary or two whilst also fighting a powerful Order member and their guards. Both of which do a great deal to detract from the story the DLC is trying to tell. There is an emphasis on a more stealth based approach to some of the missions with Darius asking you to be unseen during intelligence gathering missions. To facilitate this, Legacy of the First Blade does come with a new ability for Kassandra to utilise. The Death Veil ability will disintegrate bodies immediately upon a successful assassination attempt which means you no longer have to hide bodies to avoid detection. There is also a Persian Assassin gear set to collect and a new weapon called the Pride of the Lion.

Legacy of the First Blade is an underwhelming first entry into the DLC schedule, a smaller slice of the main gameplay that exposes the shortcomings of some of its major systems. There is, however, some scope to expand upon the story hinted at during the course of this campaign and, perhaps, start to learn a little more about the beginnings of the Brotherhood of Assassins in further entries. There are also some interesting philosophical points raised with Kassandra questioning her actions across the sprawling main campaign, and a knowing nod from the developers that regardless of that, under the player’s control, Kassandra is an indiscriminate killing machine. However like many of the wider points in the main campaign these aren’t really explored in any meaningful way, rendering them little more than footnotes. Hopefully the second expansion will build on this a little more.

Game's systems get in the way
Feels a little disjointed

Legacy of the First Blade is a mostly underwhelming first DLC that has some interesting story information for long term fans of the Assassin's Creed series.