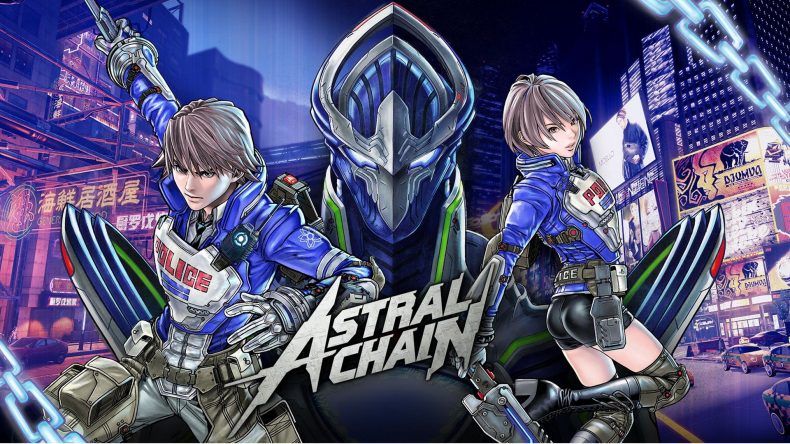 Astral Chain is not what I thought it’d be. Expecting a standard 8-12 hour action adventure game, a Bayonetta-like, designed to keep fans of developer PlatinumGames patience in check while it gets on with making the threequel for Bayonetta. Instead, what we find ourselves with is, sure, an action adventure game with absurdly creative combat, a detective game – a title with skill trees, missions, lengthy cutscenes, and a product that gives you reason to come back after the credits have rolled some 20 hours later.

The story is bonkers, of course. Even when it had wrapped up I wasn’t entirely sure what it was actually all about. The long and short of it is that you play as either of a pair of twins who have some connection to the Astral Plane, a bizarrely digital-looking place that is invading their “Ark” via gates, though it’s not entirely clear why until quite far into the story. There are allusions throughout the story that don’t entirely pay off, but perhaps some mystery is good because I’m not sure anyone could truly explain everything that goes down here.

You’re a police officer – part of Neuron; an elite force who can wield Legions via their Astral Chain. Legions exist in some form of symbiosis with its host, and allow you to attack Chimera; the “bad” version of Legions who come from the Astral Plane and kidnap humans (and animals) while attacking Neuron, too. While I won’t spoil things, the story feels both obtuse and obvious. There are moments that feel as though you’re supposed to telegraph them, and while it’s mostly a straightforward story complicated by jargon, it’s all anime all of the time. The reason Astral Chain is so brilliant, though, is the combat. Initially, direct control feels quite mashy. It also seems like a strange decision to map attack to the right trigger, but there is simply so much going on at all times that were the direct control to have the intricacies of a Devil May Cry or Bayonetta, it would be too much to take.

So here we go, then. While you, as an officer of the law, have a gun along with a heavy and light baton to attack with, you can burst your Legion onto the scene with a tap of the left trigger. It will attack for you, but you can directly control it via the same trigger. A tap will pull it back to you, a further tap will throw it to your target. Popping the right bumper down will put the Legion away, which is important as they aren’t invincible and are on a countdown timer that is based on both damage taken and time spent “out”.

The screen will flash crystal silver to indicate you can hit the left trigger again, creating a unison attack, and as you level up your Legions, these can be chained. Eventually an enemy will be weakened and you finish it off with a dual attack which, itself, will sometimes slowdown and let you hit left trigger again for a super finish which’ll refill all your health.

These are just the basics that you do while managing inventory, analysing enemies, and trying to keep up with what’s going on. There are five Legions, each with a skill tree, each with abilities and skills. As you progress and unlock moves you can switch from the Sword Legion to the Beast, each offering different ways to attack and dominate. The better you do in each file (chapter) the more points you’ll have to spend on improving your arsenal. But that’s just the combat, there’s a whole other game here. Most files start with an investigation period where you question locals about what’s going on. Eventually you have to take a quiz which, if you get right, you’ll get a higher ranking come the level end. There are side quests (blue and red variants) which change up from simple combat sections to finding a stray dog. Astral Chain is littered with things to do, often with your handy detective vision activated by pressing the plus button. You might be having some downtime at the precinct, so maybe you should go and wash your Legions clean (for what reason, I was never actually clear), change your outfit, upgrade your baton, take selfies with people, or just talk to the people around the place. Even in missions you can “walk your Legion” through redshift crystals to clean the world up, and doing so rewards you.

Each Legion has a non-combat skill, too. Your first Legion is the Sword one, and it can stop people redshifting (turning into Chimera). As you go through the game you get all five Legions, and while I rarely used the Arrow one, the Beast (dog that can track scent and dig holes), Axe (lumbering shield), and Arm (can throw objects, open heavy doors) all feel unique and essential. The way they are given to you, as well, is brilliantly laid out.

There’s never a second where you’re bored in Astral Chain, but it is worth, again, mentioning how anime it is. This is one of those games where you are saving the world, but you will take time to feed a cat or find an outrageously expensive drink for a resident of the town you’re in. I mentioned that the game is around 20 hours long, but missions can be streamlined easily. If you were to mainline and ignore the blue and red files, you could probably shave a huge portion of the game away, but so engaging is the feel, you likely won’t. But it’s not without fault. There are puzzle and platform elements that are finicky to be kind. No puzzle is stupendously difficult, neither are they simple enough to dash through. The platforming revolves around another Legion skill that lets you send it out, then pull yourself to it via the chain. This can be awkward, because the camera sometimes has a mind of its own. Some battles require this platforming, and with multiple enemies on screen, you occasionally find yourself at the behest of hope, rather than knowledge.

There are also instant fail stealth sections, I’m afraid. They’re few and far between, but they are the least fun parts of Astral Chain. Some you can brute force, and the checkpointing is pretty fair. It feels like an attempt to change the pace of things, but it rather fails at that. Luckily everything else is fantastic, and there’s a brilliant soundtrack to get the blood pumping while you destroy Chimera at will.

Astral Chain feels like a low risk game because it’s on Nintendo Switch, but it also feels like a huge effort has gone in. PlatinumGames have delivered a brilliant game, here, one that’s deep and offers accessibility for people who struggle as well as people who want to master every inch of the combat. Aside the platforming and stealth, there’s very little to complain about. It’s a testament to how strong a title it is that, immediately upon completion, I returned to play through the files on a harder difficulty, trying to get the S+ rank on them. In a crowded marketplace, Astral Chain stands out as a unique, interesting game that you’d be foolish to pass up on.

A brilliant game that’s deep and offers accessibility for people who struggle as well as people who want to master every inch of the combat. In a crowded marketplace, Astral Chain stands out as a unique, interesting game that you’d be foolish to pass up on.