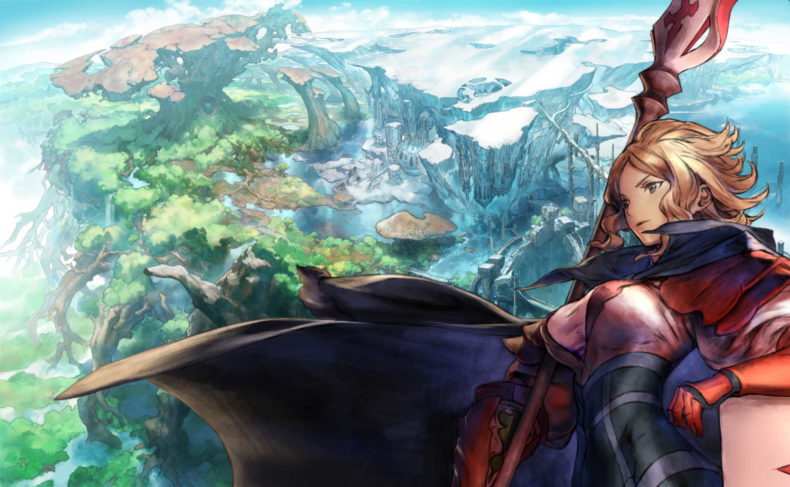 If you’re a fan of a good JRPG, then chances are you’ve had to make some tough decisions on which huge games to spend your precious time on this year. From big budget masterpieces like Tales of Arise and Final Fantasy VII Remake Intergrade, to lesser known titles like Cris Tales and Atelier Ryza 2, 2021 has provided so many fantastic games for those who like to level up. Fitting them all in around real life is a serious challenge, and means a game like Astria Ascending has a lot to compete with.

From the moment you begin your journey in Astria Ascending, you have control of 8 characters – the Demigods. To help keep the peace in Orcanon every 3 years some brave heroes become the next generation of these heroes, and are granted powerful abilities with the minor drawback of death after serving the land. It’s an interesting premise, especially considering your party are down to their last three months, but the game never really manages to capture how devastating this fate is. With evil monsters known as Noises appearing in towns and villages across the land, the final days of your band of misfits are looking anything but relaxing.

Your party is made up of a selection of the usual warriors, mages and thieves, with a selection of the different races of Astria Ascending represented. Thanks to The Harmony all the races live peacefully together and generally get along, although somebody should probably tell your party that. Regardless of any personal issues, you’ll be able to find your favourites in no time and take them into the turn-based adventure. 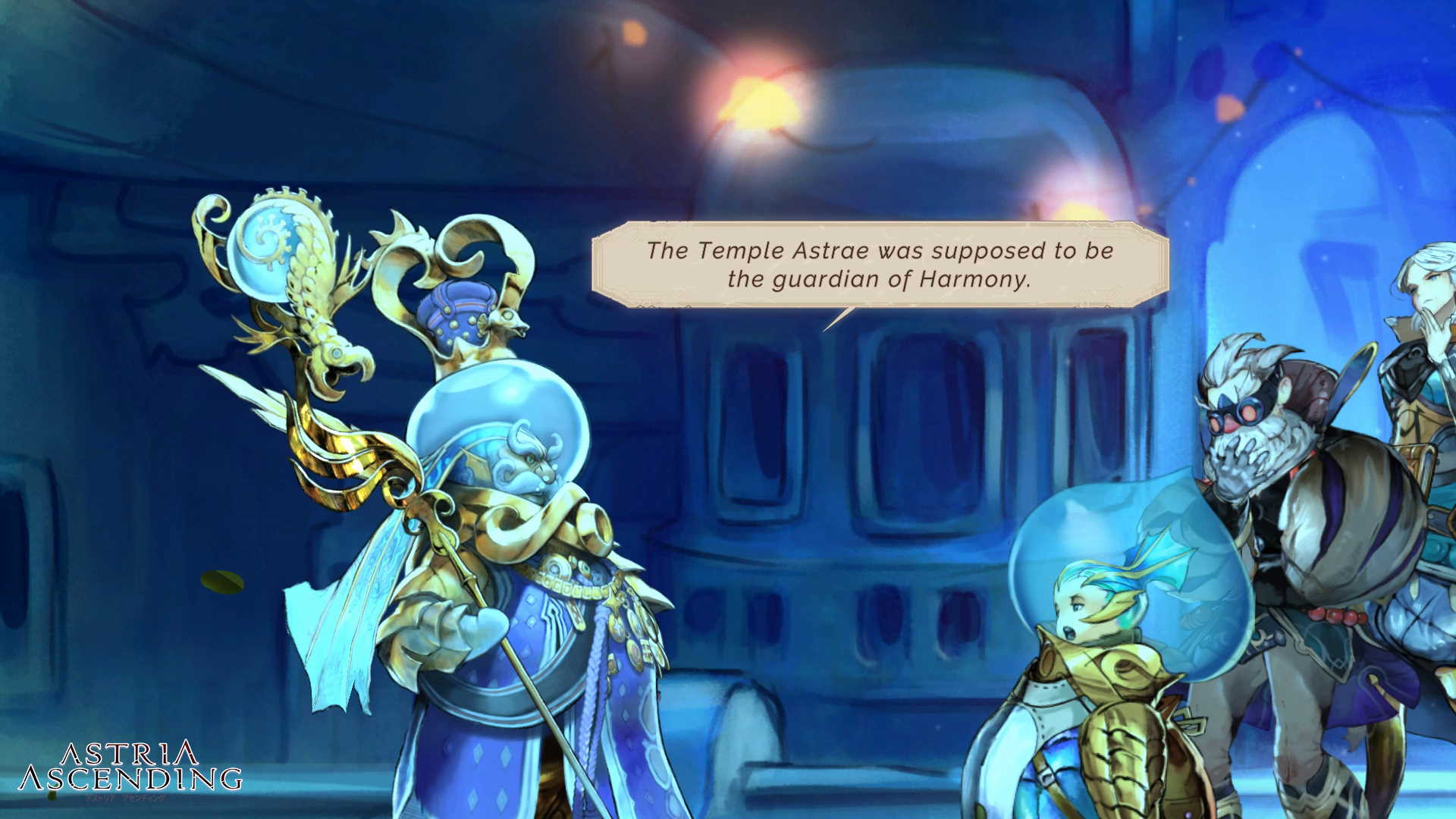 The combat in Astria Ascending is brilliant. It’s pretty standard JRPG fare at first glance, but the emphasis on exploiting weaknesses to gain Focus Points makes for some compelling battles. Using an attack that a foe is weak to grants you two of these points, and when using any of your abilities you can unleash them to deal up to 200% extra damage. Taking advantage of this will propel you to victory in many a scrap, and I built my entire team around covering as many elements as possible for that very reason.

You’ll need to be ready to use every tool at your disposal to stay alive, especially against the incredibly powerful bosses you’ll encounter. There’s no amount of mashing attack that will get you through to victory here, with huge foes that can deal huge damage to your party and apply a ton of status effects that will just decimate the lot of you. Strategy is key here; there were bosses I had to scan for weaknesses, bosses that forced me to use dozens of expensive healing items, and even some that made me re-equip my entire party with gear that gave me resistances to proceed. 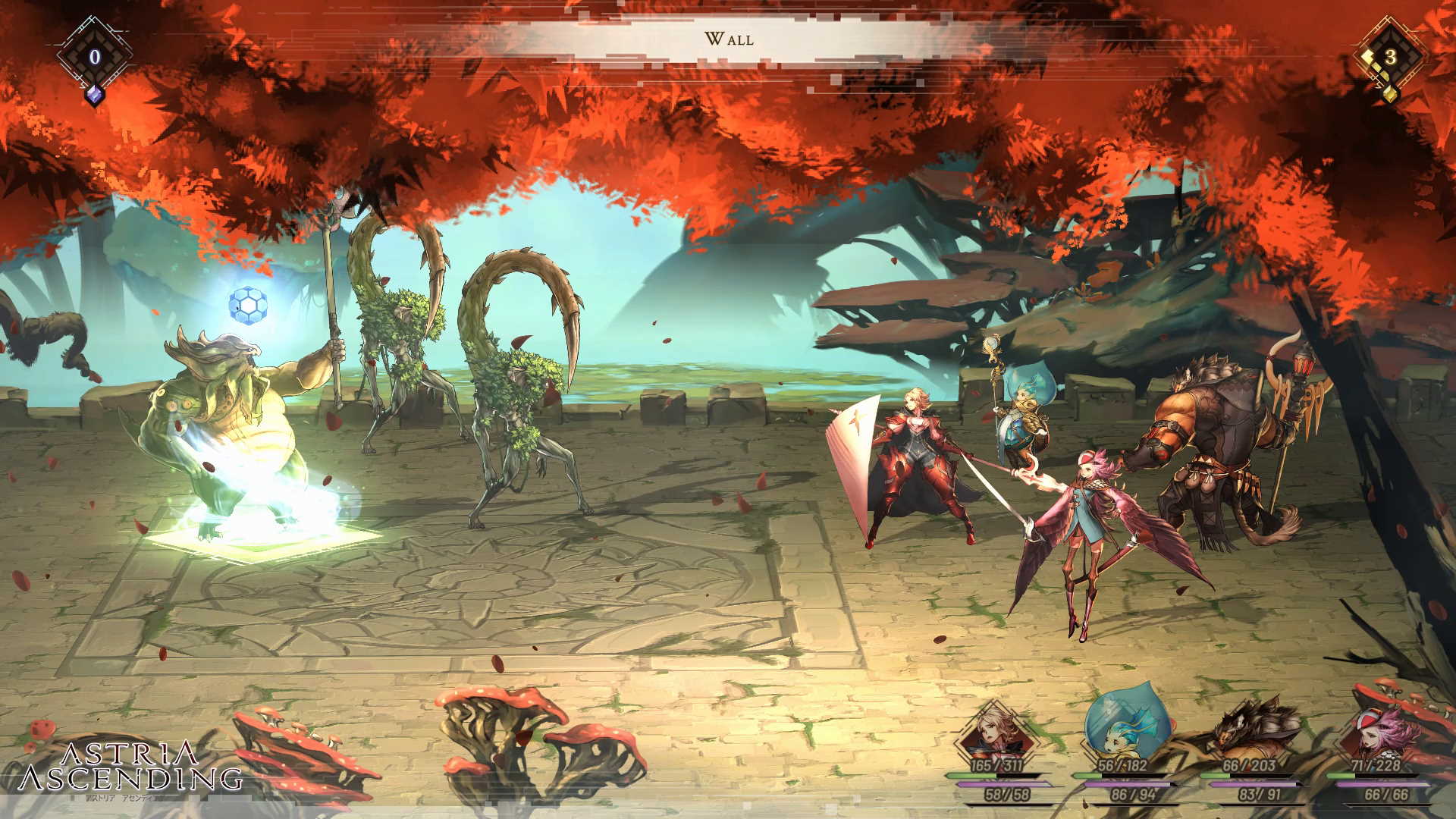 The more you fight the stronger you’ll get, with each fight giving you the experience and points you’ll need to start upgrading the party’s Ascension trees. These sprawling skill trees are individual to each character, bringing stat boosts, passive abilities and new attacks to your arsenal. There are plenty of different routes you can take through the Ascension tree to create the perfect Noises slayer. As you proceed deeper into the game each character will unlock extra jobs to choose from, complete with all new Ascension trees to start upgrading. The amount of customisation each Demigod has is pretty staggering.

Empty mazes and nothing but battles

Outside of the brutal battles, you’ll be spending a lot of your time running through dungeons to try and find your next objective. This might be the single worst element of Astria Ascending, with huge empty mazes to navigate and nothing but battles to distract you. As you progress you’ll gain access to different rings that help you progress through all the caverns and sewers, but this rarely amounts to more than burning down a barrier or moving water to create a walkway. With a poor map and oddly sensitive platforming controls, it just isn’t particularly enjoyable to spend time in these environments. 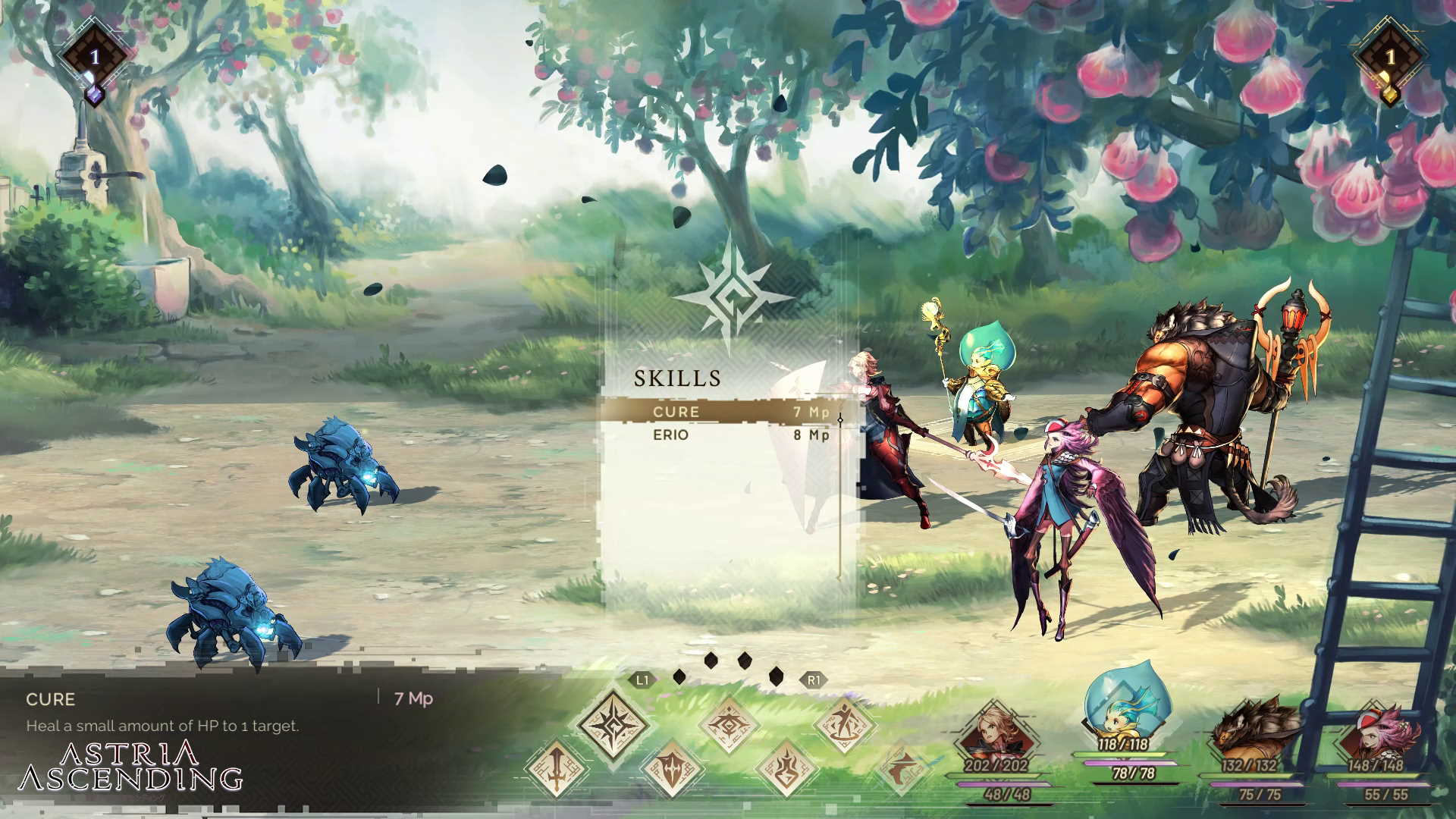 When you aren’t focusing on protecting the world and hacking your way through caves, there’s plenty to keep you and the Demigods busy. There are side quests that see you talking to various citizens, hunts for optional and fearsome boss monsters, and the powerhouse that is J Ster. J Ster is the collectable card game (although they’re tiles) of this JRPG, and is impossibly compelling. Each tile has an overall numerical value and letters on each of its six sides, which adds or takes away power when attacked from that direction. There are different rulesets that different NPCs use, and if you win you’ll get to take some tiles from your opponent. If you ever spent hours playing Triple Triad you’ll be absolutely enthralled by J Ster, and for most of my playthrough I’d spent more time with the tile game than actually saving the world.

Astria Ascending is breathtaking to look at

There’s no world where I don’t talk about how entirely breathtaking Astria Ascending is to look at. With a style reminiscent of Dragon’s Crown, the characters are just dripping with personality from the visuals alone. Environments are really impressive too, from the bustling market to the rolling hills I was always happy to explore the wonderful world of Orcanon. 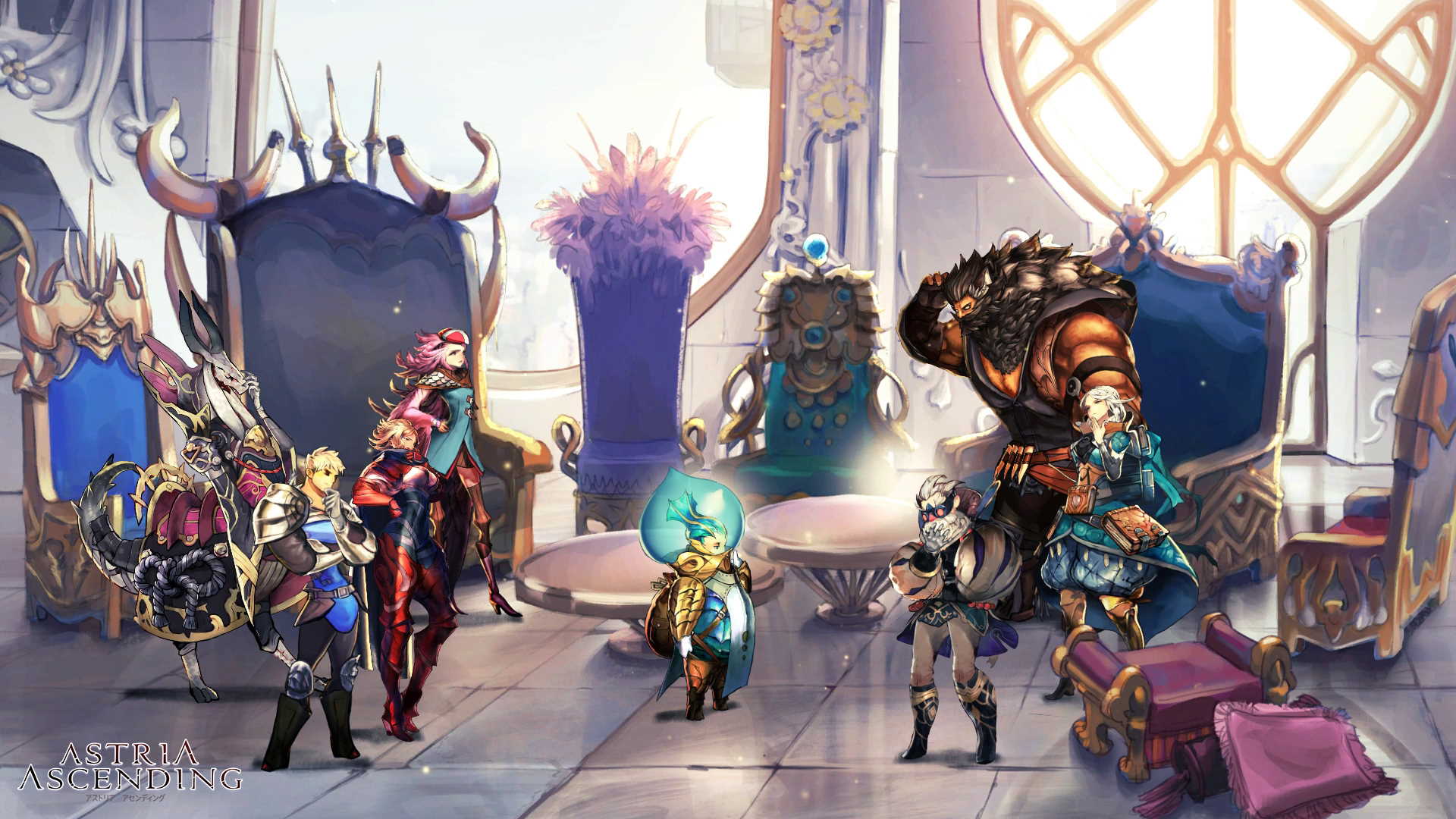 I really like Astria Ascending, but it isn’t without faults. The English voice acting is consistently bad, including the main cast, which is more than a little distracting. Another issue I had was with the standard enemies in the dungeons. You absolutely need to fight every Noises you encounter to keep yourself strong enough, and you’ll end up fighting the exact same composition of the monsters over and over again. It gets tiresome pretty quickly.

Astria Ascending is an enjoyable classic JRPG, with a few things that hold it back from being great. Combat is really engaging and there’s plenty to keep you busy, but poor voice acting and dull dungeons really drag it down. If you are hankering for some great turn-based action and have somehow played all of this year’s fantastic RPGs though, Astria Ascending is still worth experiencing.

Astria Ascending is a good JRPG, but in a year packed with lengthy games and a few issues with voices and grinding it's not that easy to recommend.