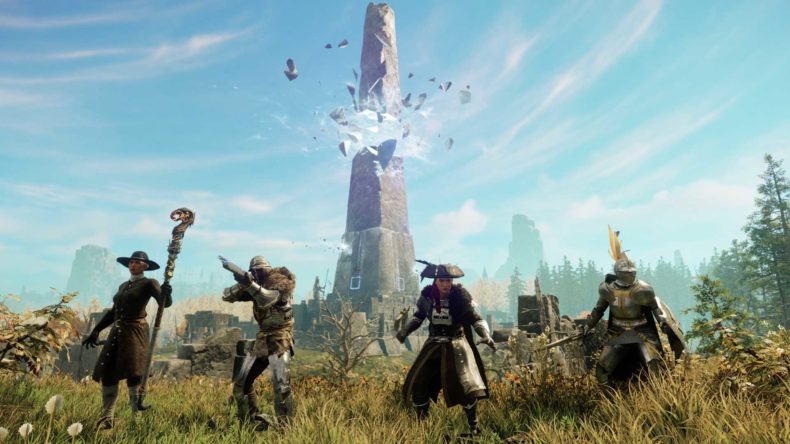 Before I launch into my New World review, a brief history. Between the launch of The Burning Crusade expansion in January 2007 and the birth of my daughter about 18 months later, I poured around 1500 hours in World of Warcraft. It was something of an obsession for a time. It was my first MMO, and of course back then there weren’t quite so many to choose from, so I stuck with it and nothing else. When I stopped playing (I actually quit, uninstalled it, and threw it in the wheelie bin outside), I felt a genuine loss that took a few weeks to go away.

Since then I’ve merely dabbled in MMOs. From Neverwinter and Final Fantasy XIV, to Skyforge, TESO and Bless. I’ve jumped into them all feet first and have always failed to stick the landing. I dropped out of FFXIV when my free month ran out and I was too tight to pay the sub, I gave up on TESO multiple times because I can never work out what the hell I’m supposed to do when I start. But for some reason, New World is the one that appears to be sticking. 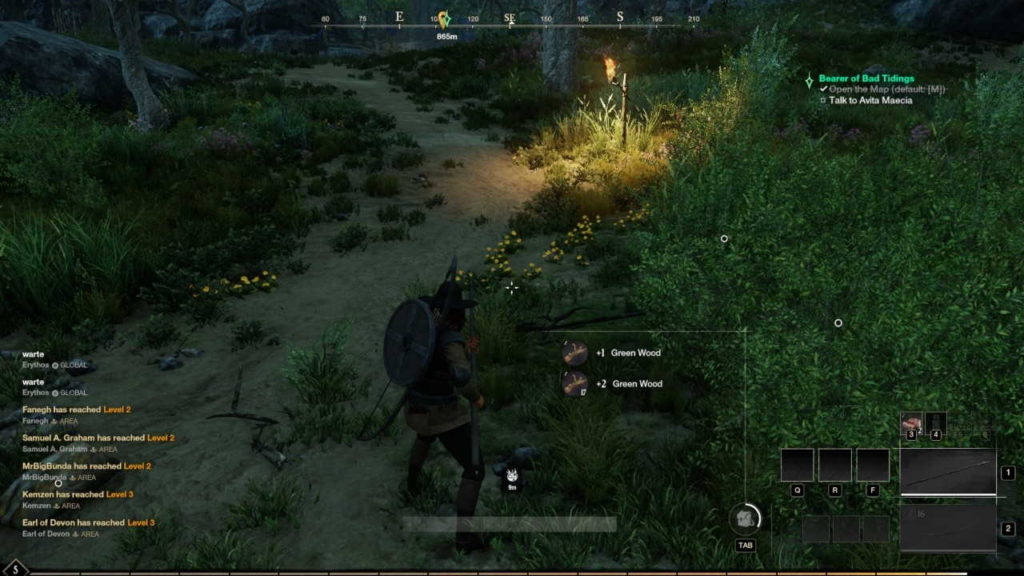 Now, no one was expecting much here, let’s be honest. The spectacular failure of Amazon’s hero shooter, Crucible, hardly filled us all with confidence. I expected a passable TESO clone and nothing more. Well, I’m happy to admit that I was wrong.

It’s probably not unfair to say that New World does nothing, well, new. It’s a pretty straightforward, almost cookie-cutter MMORPG in terms of the formula. You wash up on the shore of a vast, unexplored continent called Aeternum. It’s equal parts The Elder Scrolls’ Tamriel and Greedfall’s Teer Fradee. After receiving some deserved stick for its heavily Colonialist reveal, there’s been a little backtracking done with the setting. It’s now less about subjugating the indigenous peoples and more about not getting eaten by magic zombies.

Anyway, as I was saying… You wash up on the shores of Aeternum to find the new continent in the grip of a magical corruption. Despite settlements already being established, your foothold is threatened. Aeternum is a place of ancient history and arcane treasures. The right person could stand to amass a fortune, or come into great glory, but you can’t build a cabin without chopping down some trees. 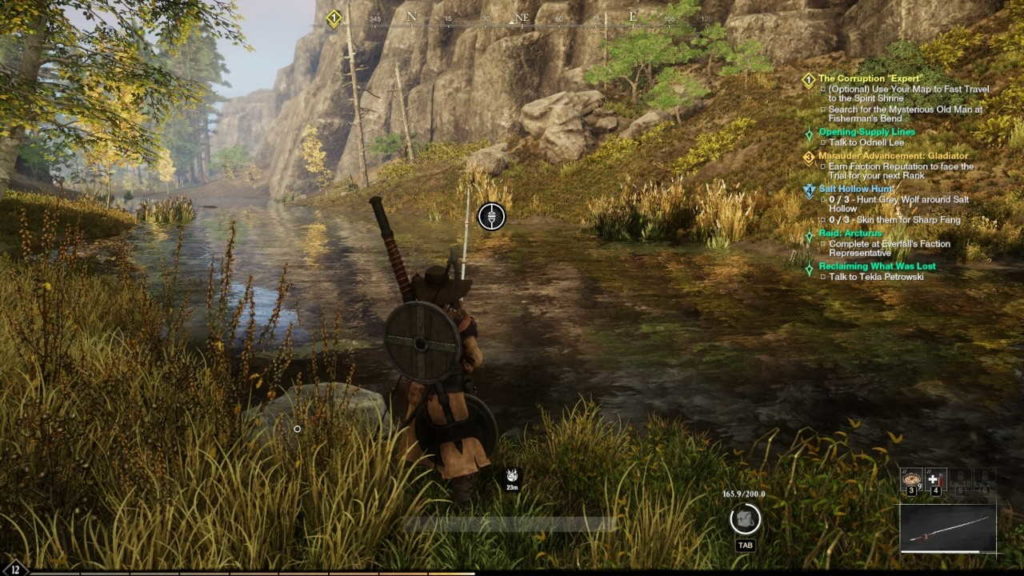 In standard MMO fashion, you begin with nought but the rags on your back and the pointy stick in your hand. There’s some coin in your pocket but not much, and all you can really do is follow the path laid out before you. Well, you can wander off it if you like, but you’ll certainly die horribly.

Once you reach the first settlement of Everfall, New World wastes no time in throwing quests at you. But unlike a lot of its genre mates, it doesn’t overwhelm you. The first quests are easy and clearly marked. If anything, the simplicity of the rank and file quests is a bit of a negative. “Go here and kill these” or “go here and gather these” have been trite for years predating this title.

But New World rewards you well for pretty much everything you do. There’s an economy behind gathering materials and crafting, and while it takes a Titanic investment of time to reach a point where you can gather the rarest reagents and forge the most powerful gear, it’s worth it. Once again, I must reiterate that New World does nothing that is actually new. You can chop trees, mine ore, go fishing or hunting or flower-picking. Wood can then be refined, ore smelted into ingots, caught fish boiled in a bush-tucker casserole. Then you can store it all, use it all, or sell it all. 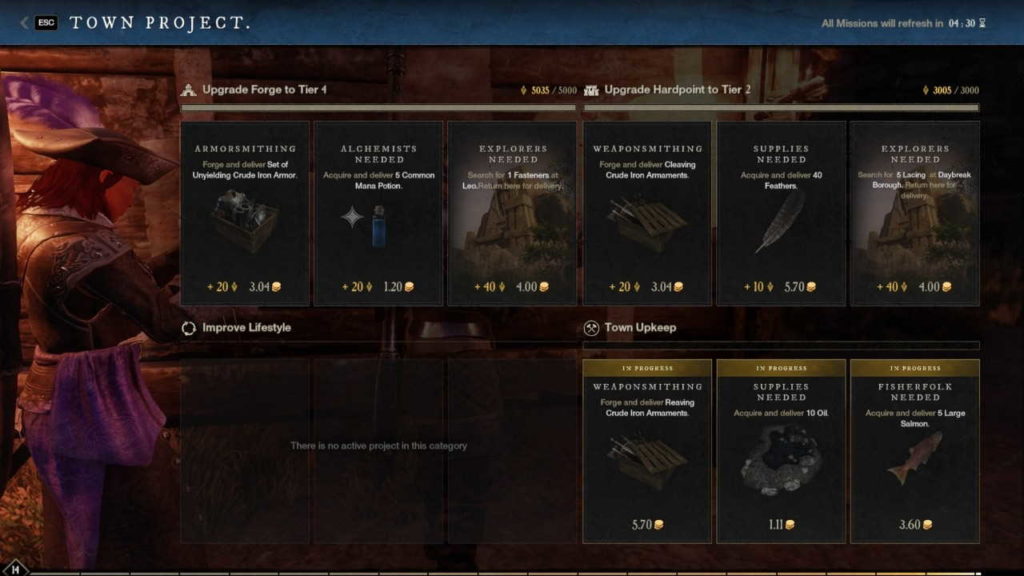 In between such feats of industrialism you can head off on adventures, slaying skeletons and wolves and zombie farmers. You’ll seek out hidden secrets and treasures that make little sense out of context. You’ll need to provision up before you go. Health potions are hard to come by in the early game, so every unlucky bunny spied through the undergrowth becomes the potential span between life and death. Meals provide constant health regeneration for a period of time, so always be stocked up.

The class system in New World is interesting though. While you physically sculpt a character in the traditional way, you don’t need to choose a class. Instead you can equip two weapons at any time. These can be one-handed like swords, or hatches and rapiers (the latter two of which you can’t pair with a shield, weirdly), two-handed axes and spears, staffs for wielding magic or guns and bows. The weapon type has its own skill tree, which you’ll unlock as you use the weapon. There are active skills and passive boosts, and you can swap weapons as often as you like. Oh, and you can respec for free.

As with most modern MMORPGs, there’s a storefront for premium currency. This is mostly for cosmetics and consumables, but you can also unlockany things through play. The armour designs see you cosplaying as pirates, frontiersmen, witchfinders, or conquistadors, and skins let you adjust your look. The store isn’t intrusive and New World never makes you feel like you have to spend anything. 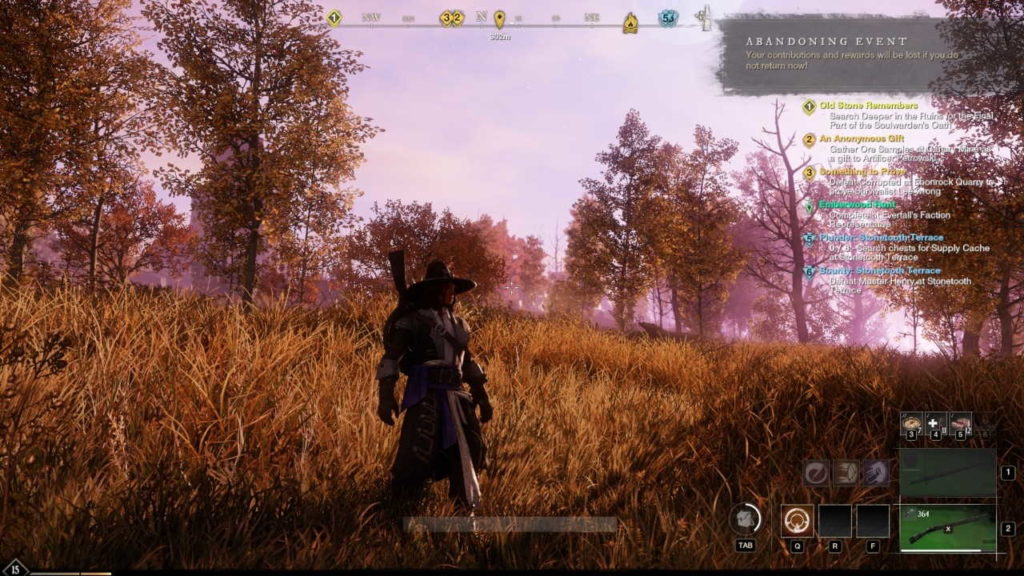 Early on you’ll join one of three factions. These offer solo and group quests, but also allow you to engage in PvP. Thankfully PvP is unforced. Switching it on will signify that you’re looking for a ruck when you leave town, but if you want a peaceful time you can leave it off. Forming “companies” allows you to quest together with others to tackle tougher assignments. You can also take on quests to help build your relationship with each settlement. This increased standing can boost your XP gain or reduce gathering times, among other things.

My biggest complaint is that it takes an age to get anywhere. There’s fast travel but only from specific places. Once an hour you can recall to the inn you’re registered with, and you can build camps in the wild that act as respawn points if you die. But New World is in desperate need of mounts or vehicles or even spells to speed up on-foot travel.

That bring said, it’s a beautiful world to traverse. It lacks the innate otherworldliness of Azeroth or Eorzea, but some of the environments are lovely. As the early morning rays glimmer through patches of mist on a riverbank, or you crest the last rise above a thundering waterfall, New World can look lovely. 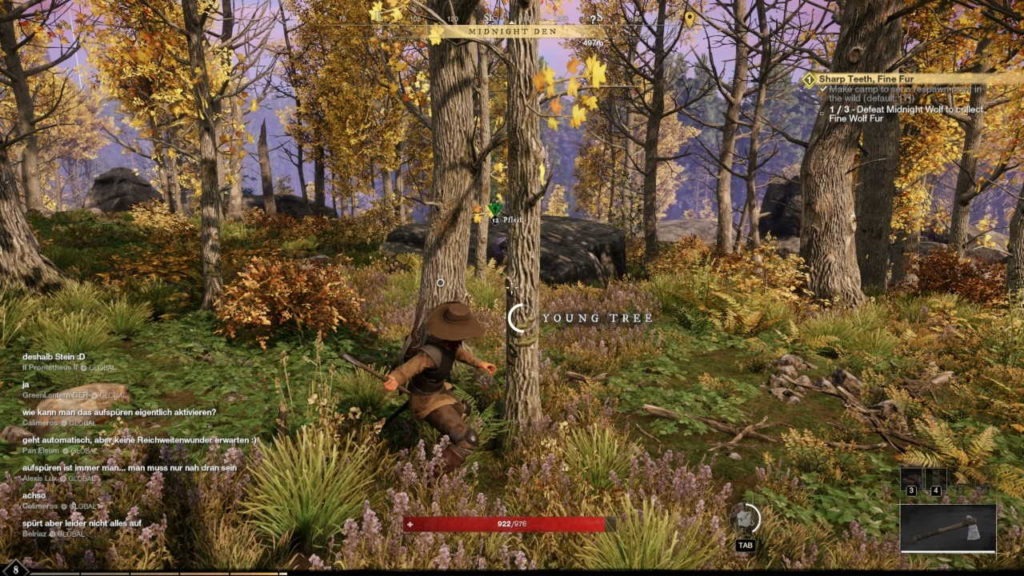 And it feels like a bustling world. There’s danger in the world but it doesn’t feel like you’re ways drawing aggro, and you don’t have to fear other players unless they’re stealing your harvest nodes. It’s almost relaxing and I’ve had an absolute blast so far. If anything I’d like to see more outlandish enemies. I want to see something lurking in the woods and know it’s going to destroy not just because of the red number above its head, but because of how many teeth are jammed into its multiple jawlines.

Ultimately, New World is a pretty damn good MMORPG. It’s fun and accessible, and though it doesn’t do anything truly new, it has enough little twists on existing ideas to keep me invested. I’m not in the endgame yet, so more on that later, but the hours I’ve poured in so far have seen me buy property and become a carpenter while also breaking zombie heads and that can only be the sure sign of a winner. New World might not be the most original MMO out there, but it’s heart is certainly in the right place, and that’s maybe more important.

New World is a pretty damn good MMORPG. It's fun and accessible, and though it doesn't do anything truly new, it has enough little twists on existing ideas to keep me invested.