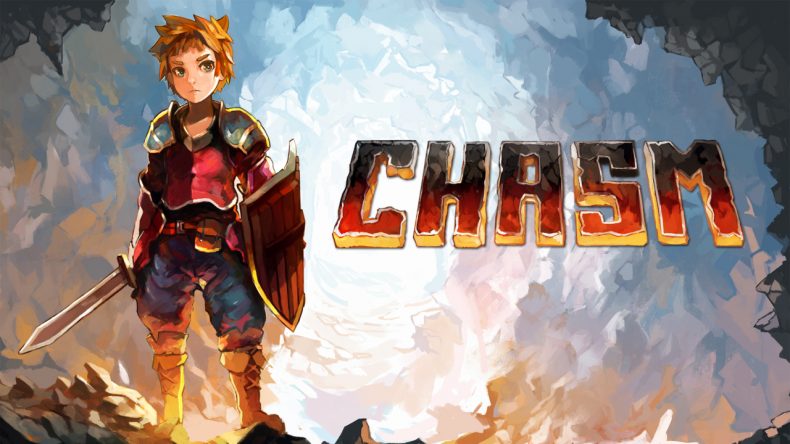 2018 has been a pretty hot year for both Metroidvanias and roguelike adventures. We’ve seen Hollow Knight, Dead Cells, The Messenger, Castlevania Requiem, as well as ports of stuff like Rogue Legacy and Salt & Sanctuary on the Nintendo Switch. One game console-owning fans of the genre might have been waiting for is Chasm, a randomised, retro-styled mine-crawler from indie outfit Bit Kid. Released months ago on PC, Chasm has finally tunnelled its way onto consoles, and presents a simpler, less intense alternative to most of its genre-mates.

When a mine in the nearby town starts spewing out monsters who abduct the townsfolk, your young knight in training is dispatched by his order to investigate. Initially armed with only a short sword, you travel to the town and begin a fun but fairly nonsensical journey ever downwards. Your primary objective is to rescue the missing townies, helpfully listed on a board in the Mayor’s office. At first I thought I was in for another hard-as-boiled-granite roguelike Metroidvania where every mistake could cost me the game, but it soon became apparent that Chasm is no such beast. It’s no cruel sadist out to punish your every error, and instead draws much of its difficulty from the fact that it generates a new map for each playthrough, meaning you can save your progress regularly, but you can’t jump online to watch a video when you’re stuck. The interior of the mine changes each time, mixing up the various biomes and rooms in an attempt to keep you coming back. Which is great, only there’s not really enough challenge or level variety to warrant return visits.

Gameplay is fairly simple as you explore the mimes, armed only with a sword and the ability to jump from ledge to ledge – but you’ll soon start to unlock other abilities such as a roll and a double jump. As you learn new things, backtracking becomes the order of the day, allowing you to explore further and deeper. Your short sword will give way to axes and spears, you’ll find a shield, throwing knives, bombs and spells; you will find better armour (sadly without a visual accompaniment, which really gets up my hauberk). Slowly you’ll develop an arsenal, unlocked by freeing townsfolk and looting gold and valuables from every kill – and there’s a rudimentary levelling mechanic that’s so arbitrary I kept forgetting about it, as it only awards you an extra point in health and damage each level, which doesn’t make an awful lot of difference. Characteristically for the genre, combat is mostly timing-based. Hitting enemies mid-movement or evading an attack to deliver a counter will usually see you through, but there are over 100 enemy types with a variety of attacks. I found shorter enemies to be more of a chore, as swinging your sword prevents movement, so you have to crouch and wait for an enemy to get into range, which is easy to misjudge and can break the flow of the action a little. There are several boss battles throughout, which vary in difficulty but present nothing you haven’t seen before on many occasions (giant worm, giant wasp, troll, etc). Also, the majority of these encounters are fairly easy to decipher, and then it’s just a case of jumping, ducking, and striking whenever you have a clear shot.

Chasm is a pretty enough game. The retro art-style might be nothing new (at a certain point, retro stops being retro and just becomes the norm again), but the colours are vibrant and the enemies are well-drawn. The environments, on the other hand, are a it on the bland side, never dazzling and instead kind of just existing as something to run around in front of. It’s also worth pointing out that the mine itself seems to exist in several different dimensions – one area of the game is more or less a jungle, for example, which makes absolutely no sense.

There’s a lot to enjoy in Chasm, and if you’re after a less intense Metroidvania-like experience then you’ll probably really like it. Unfortunately, it’s just not all that captivating. More often than not I just found myself charging through areas, getting irritated that I had to keep backtracking to a save statue so I didn’t clumsily erase the last rescue or miniboss fight. For younger or more casual gamers who just want to kill an hour here and there, it’s a decent little adventure.

Bland environments
Levelling up is pointless
Not very thrilling

There’s a lot to enjoy in Chasm if you’re after a less intense Metroidvania-like experience.