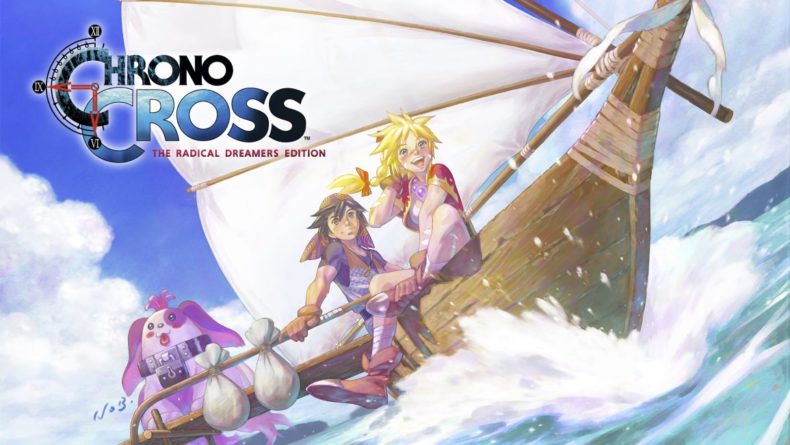 It’s rare for games to be released in the US and not in the UK nowadays, but back in my childhood and teenage years it happened a lot. Nothing felt worse than reading about a cool new game in the latest issue of Nintendo Official Magazine, only for it to never materialise in PAL territories. If I’d had a PlayStation at the time, Chrono Cross would definitely have been another of these huge disappointments. Missing out on the next game in the legendary Chrono series was heartbreaking for many of us Europeans, but now the time has come to rectify that issue. Chrono Cross: The Radical Dreamers Edition is here, and this legendary JRPG is still fantastic 23 years later.

Serge is just a normal teen, living his life in the idyllic seaside village of Arni. After a day trip to the beach with his childhood friend takes an interdimensional turn, he ends up in a world where nobody knows who he is anymore. In this other world, Serge died at ten years old in a tragic accident. His sudden appearance causes quite a ruckus with the local (definitely not corrupt) knights, and thus an adventure to get home begins. 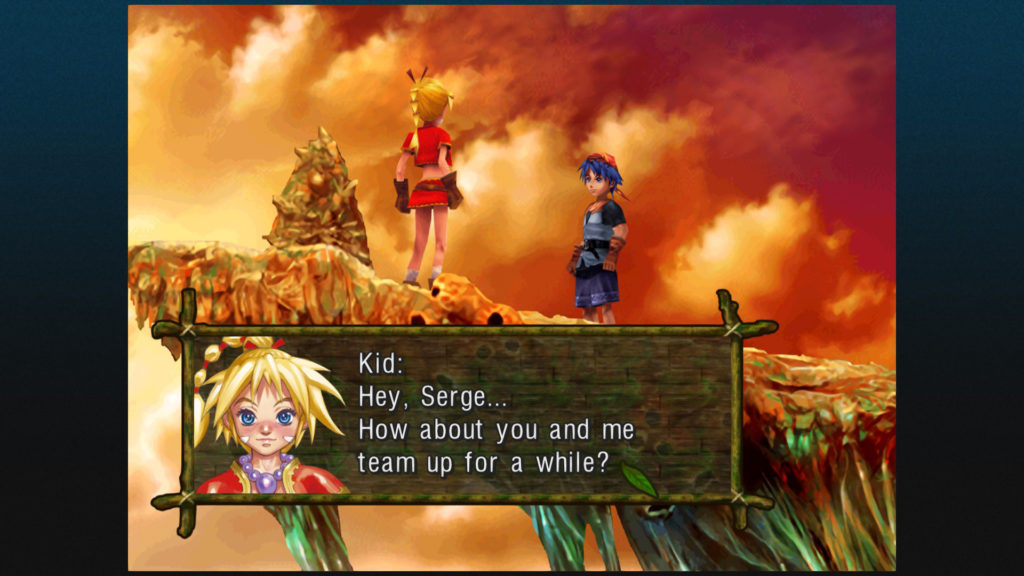 Along his adventure Serge meets an incredible variety of allies full of character, none more important than Kid. This brash teen thief has a bone to pick with the Dragoon knights, and allies herself with our hero almost immediately. Her foul mouth hides a tragic backstory, and she ends up as one the most likable characters you meet.

Where there are heroes there must also be villains, and Chrono Cross has plenty of captivating wrong ’uns you’ll meet on your adventure. From mysterious trash talking jesters to the evil half-cat half-human antagonist, the bad guys are an ever present threat in the world and the odds always feel stacked against the party. With determination and a bit of elemental power though, Serge and company are prepared to take on the lot of them.

In many ways the turn-based combat in Chrono Cross is pretty simple, but as you progress it takes some serious decision making skills to overcome your foes. Each time you attack you can choose from 3 power levels, each sacrificing accuracy for more damage. Once you’ve got some hits in you’ll build magic power and be able to unleash powerful Elemental attacks. 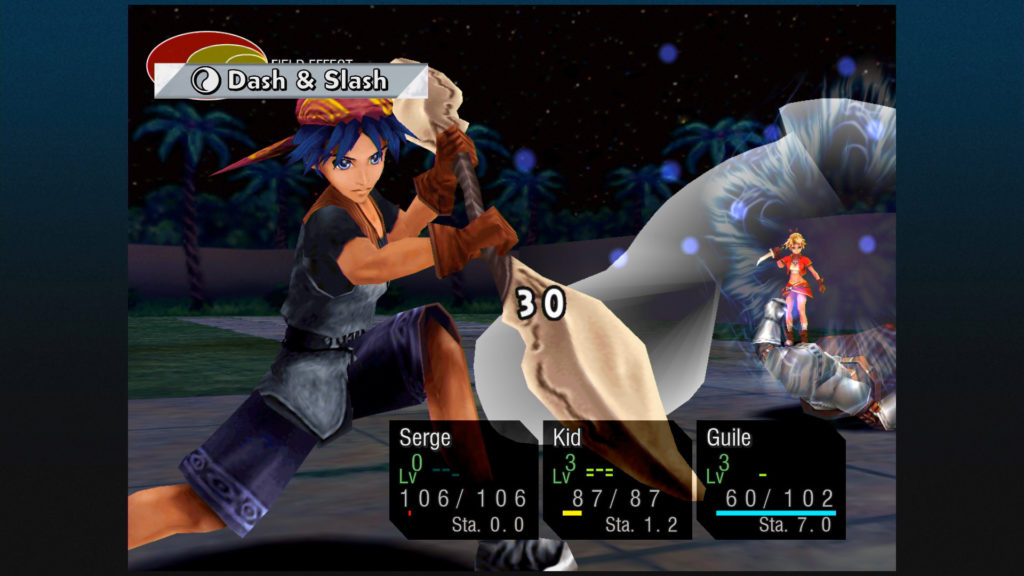 By equipping Elements, characters will be able to use them once a battle (as long as they have the power to do so). Elements range from the usual damaging spells and healing, to consumables and even mighty summons. Each element you use is assigned a different type, so you’ll need to take advantage of this to deal extra damage to the enemy. Fire beats Water, Light beats Dark. It’s not complicated, but making sure you have the right build to take advantage of these weaknesses is essential.

As you and your buds level up you’ll unlock higher level slots for your Elements and be able to equip stronger spells because of it. There’s a lot of extra complexity to deal with when assigning what are essentially your abilities. Elements can be placed in higher leveled slots for example, to deal more damage or heal more wounds. Or maybe you want to load up on spells of the same element so you can chain them together to make them more powerful thanks to a field advantage. It’s important to keep all of this in mind if you want to beat the next tough boss encounter.

As you progress you’ll get a whole host of characters to level up, each with different Element affinities and special skills to use. There are over 40 in total, some that can’t be missed but many that are totally missable. You can only use 3 in battle at a time, but it’s fun to amass a team of fairies, luchadors and masked magicians to switch between at will. It became very tough to pick my favourites very quickly, because they’re all just so well designed.

Exploring the world of Chrono Cross is an absolute joy, especially when you begin traveling between the two realities. For example, early on you need to gather an antidote from an extinct creature in one dimension so travel to the other to save the day. Each unique area you traverse is a joy to wander through, be it a poisonous swamp or a manor full of guards. The fact there are no random encounters definitely helps too, and makes Chrono Cross feel much more modern than most PS1 games. 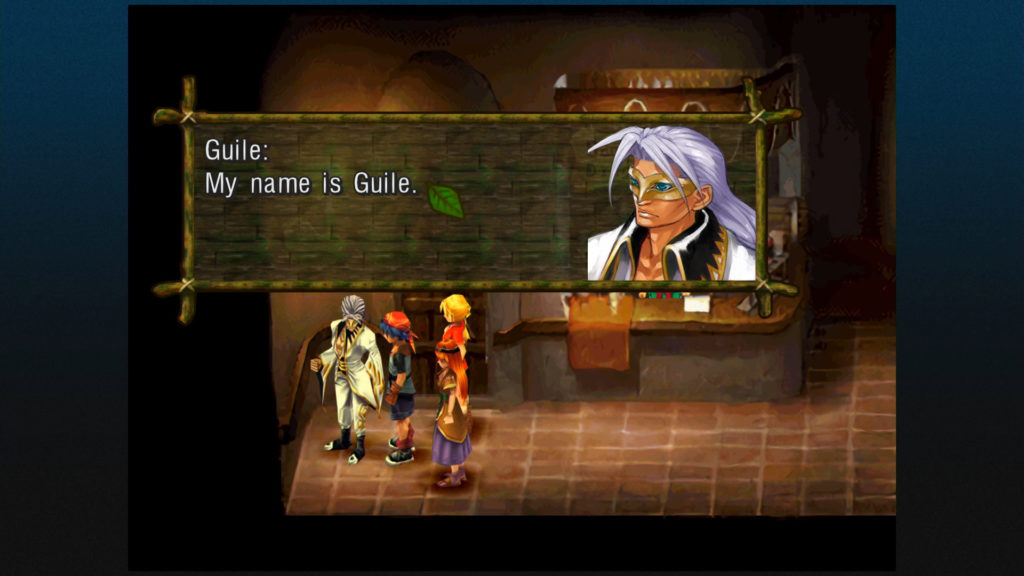 As you might expect, Chrono Cross: The Radical Dreamers Edition comes with a fair few upgrades. The new 3d models and HD text are much easier on the eye, as are the updated character portraits (although purists are welcome to switch to the original graphics). There are also new combat difficulty options as well as the ability to turn combat encounters off entirely. The extra polish is certainly appreciated, and although Chrono Cross is never going to look amazing by modern standards it’s certainly more palatable here.

The other extra included in this remaster is a text adventure from the Nintendo Satellaview called Radical Dreamers – Le Trésor Interdit. Don’t expect anything too flashy here, as this game is simply text on a screen and occasional low resolution backgrounds. There are plenty of moments with multiple choices to select throughout this heist adventure, and lots of opportunity for death along the way. Radical Dreamers has plenty of familiar characters in, as well as actual connections to both Chrono Cross and Chrono Trigger, so it’s a cool little curio to have access to if you don’t mind lots of reading.

It would be criminal to review Chrono Cross without talking about the soundtrack, which is beyond outstanding. There’s a reason this game’s music is talked about in “Greatest soundtrack of all time” discussions, it simply is that good. 90s Squaresoft were pretty much unbeatable in the audio department, and Chrono Cross is anything but an exception. 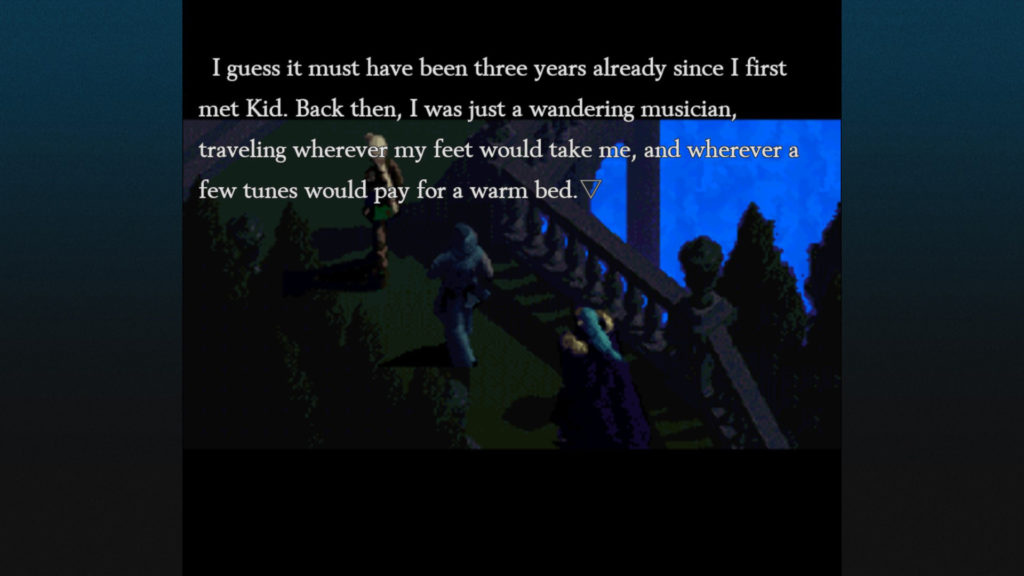 At the time of writing there is one distinct issue with Chrono Cross on Switch, and that’s the performance. The framerate is low at the best of times, and in certain areas it drops even further. A turn based JRPG is fortunately not particularly ruined by these issues, but it’s undeniably disappointing that such an old game struggles in this regard. Hopefully a patch fixes this soon.

Chrono Cross: The Radical Dreamers Edition is frankly one of the best JRPGs I’ve ever played, and it’s fantastic that so many new RPG fans will get to play it with this release. This version of Chrono Cross is in many ways the ideal way to play the game, but the performance issues are hard to ignore. Regardless though, those of us who have been unable to play this legendary JRPG absolutely must embrace the opportunity. It is phenomenal.

Some performance issues
Le Trésor Interdit is rather dated

Chrono Cross: The Radical Dreamers Edition brings possibly the best PS1 JRPG to Europe for the first time, and it simply must be played.