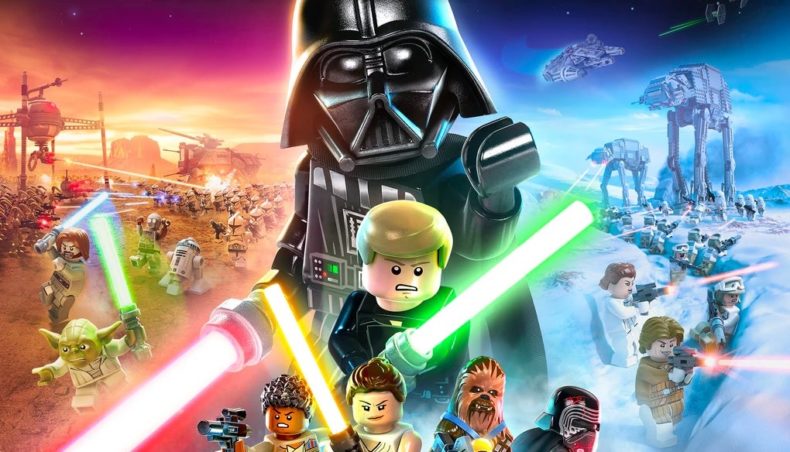 In The Last Jedi, Rey says, “I need someone to show me my place in all of this.” This same quote is uttered as the menu screen appears in LEGO Star Wars: The Skywalker Saga. Eventually, Palpatine’s granddaughter realises what she must do to defeat the Empire once and for all, but it is her friends that show her the way. When playing through TT Games’ latest entry in their vast LEGO Star Wars series, it’s clear they are adamant in showing you what your role in the game is. It is to explore the entire saga and have fun doing so. It is to highlight the importance of the Skywalker family and have you reminisce about the biggest space battles and duels ever seen in the war between the light and dark sides of the force.

LEGO Star Wars: The Skywalker Saga is a beast of a game. Every trilogy takes around six hours to play through, but if you want to find every collectable or secret, be prepared to double that. TT Games has packed in every character you can think of, set across every integral planet throughout the saga. Be prepared to pod race on Tatooine, shoot Scout Troopers on speeder bikes on the forest moon of Endor, and survive Order 66. Whatever moment you’re looking forward to seeing, it’s more than likely there. The thrills and excitement of each movie have been done justice, but be prepared for some filler sections. 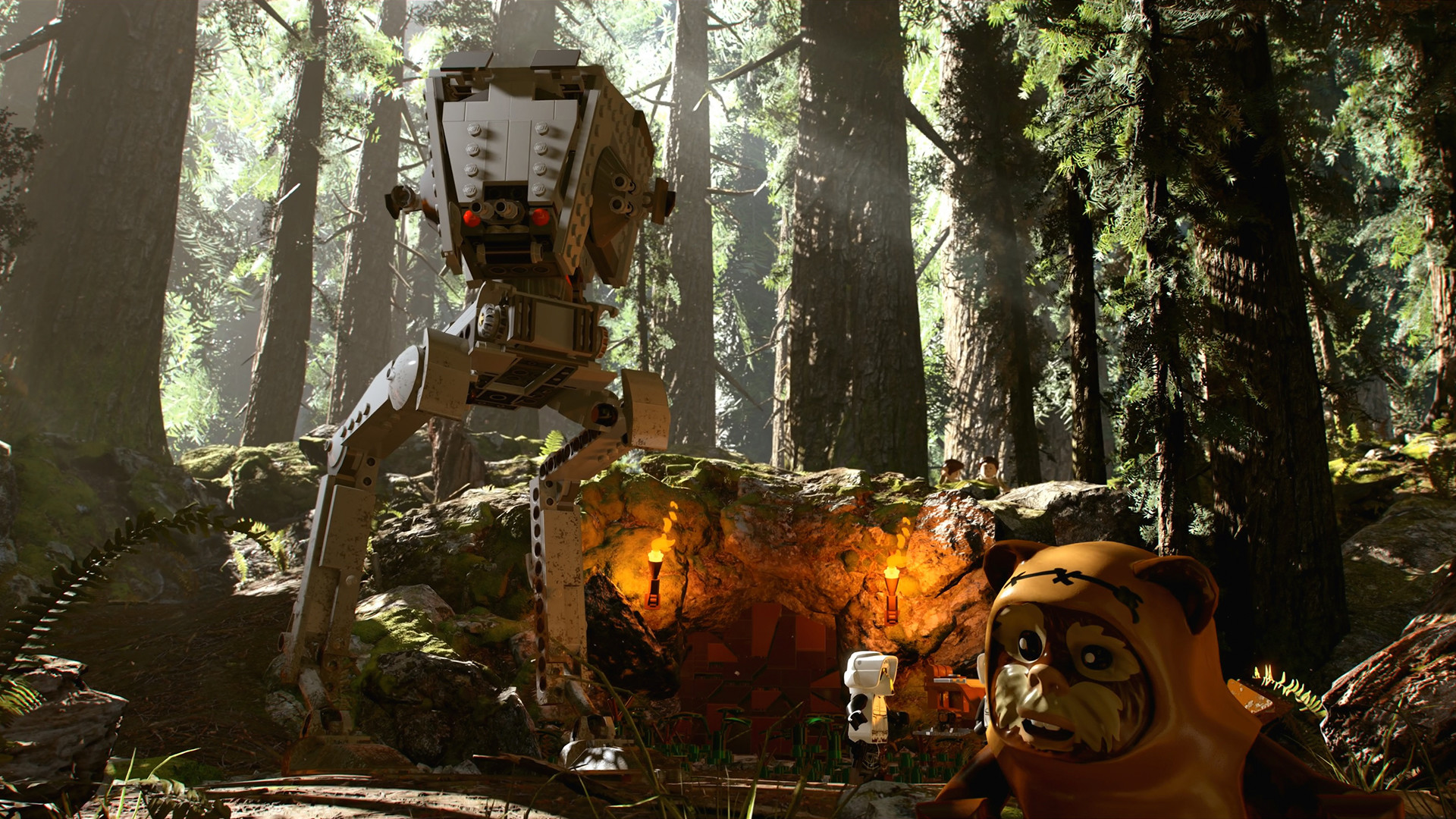 LEGO Star Wars: The Skywalker Saga: A lot of class

Each episode consists of five levels, and for the most part TT Games has built some solid gameplay with gorgeous surroundings. What I loved about playing was how many classes are available, each with certain abilities that are unique to them. Jedi’s and Sith can wield lightsabers (with different combat animations depending on the character), use the force to move objects, and influence enemy minds; Scoundrels like Han Solo can find certain solutions to environmental impasses, Scoundrels such as Tusken Raiders or Wicket the Ewok can build specific tools to traverse the world; Bounty Hunters can destroy golden bricks for special rewards; and Astromech Droids like R2-D2 and BB-8 can hack computers to unlock doors.

Combat does feel repetitive, but there’re many options depending on who you’re controlling in a fight. Lightsabers, blasters, and good old-fashioned fists are just some of the ways to beat up Stormtroopers or battle droids. You can also use light and heavy attacks, or class-specific abilities such as throwing your lightsaber. Without a doubt, the force-wielders are the best of the bunch, with others feeling like an afterthought. There’re a fair amount of boss fights scattered across the saga, but often easy and too similar. Some try to mix up fighting with ways to use class abilities between phases, such as Obi-Wan Kenobi making his way through General Grievous’ base on Utapau before getting another crack at the coughing saber thief. 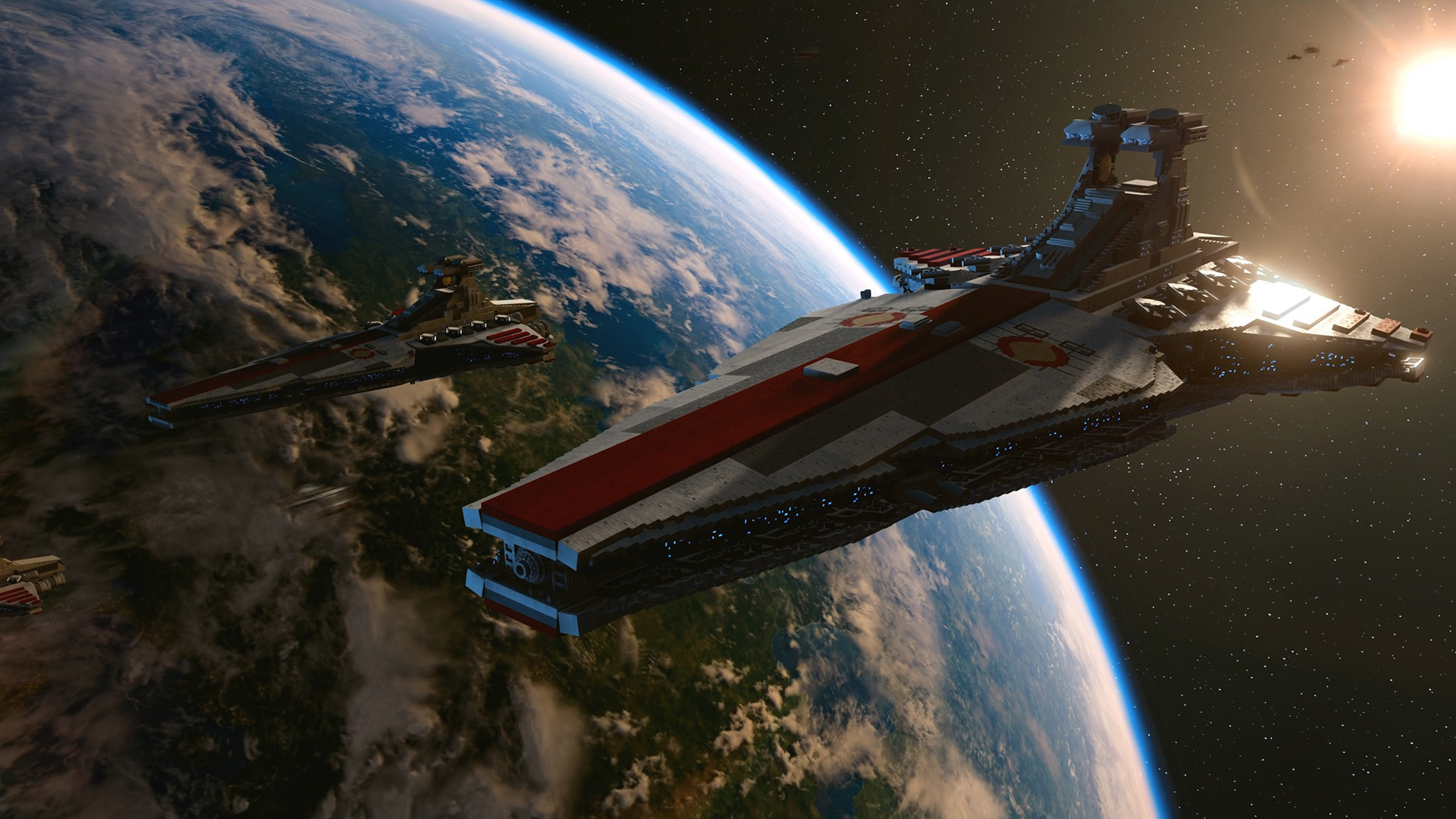 The pride of the franchise

These big money fights make up the most important moments of the saga. Despite some being a bit lazy, there’re also some that I thoroughly enjoyed. Anything involving Palpatine was excellent, ranging from his fight with Yoda in the senate, to Rey’s final showdown with him on Exegol. The space battles are almost always excellent, too. LEGO Star Wars: The Skywalker Saga is filled with plenty of puzzles, often revolving around opening doors, but there’s also plenty of building on offer. There’s enough variety across the nine-movie span, and I genuinely enjoyed it for the majority. Some locations are better than others, but each one is meticulously designed to reflect the grandeur seen on the silver screen.

There’re a ton of locations that can be explored for Kyber Bricks, Datapads, rumours, characters, and more. Kyber Bricks will allow you to upgrade core abilities or class-specific ones, but I rarely noticed any improvement due to the easy difficulty. One that did make a lot of difference was the ability to attract studs that were further away. Rumours give you guidance on how to unlock certain items or characters. Datapads allow you to unlock fun options in your playthrough, but you still need a lot of studs to get them. Perhaps the most important options here were the stud multipliers, but getting a substantial one is going to cost literal millions. 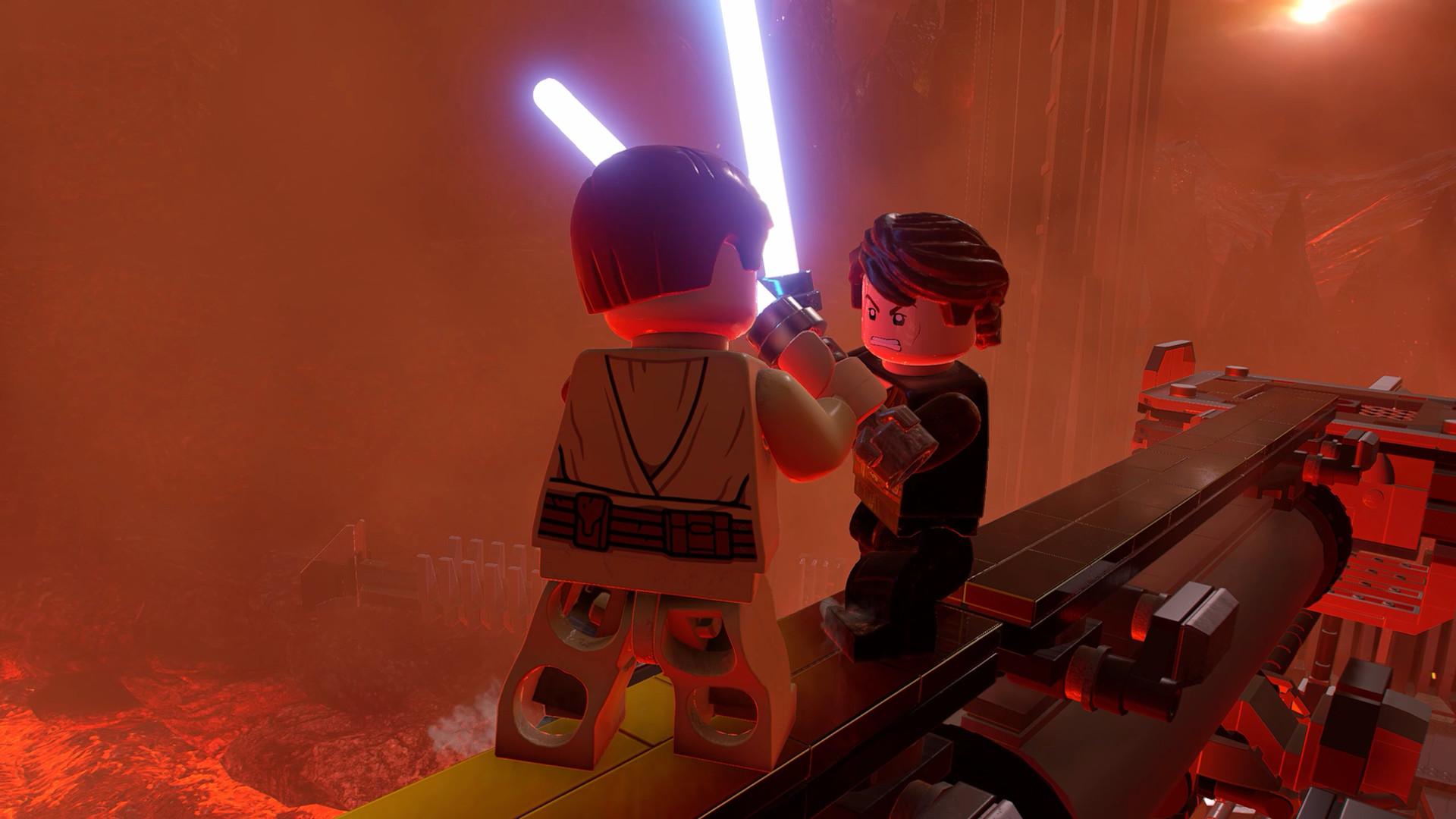 LEGO Star Wars: The Skywalker Saga: So. Much. Collecting

Of course, you don’t need to find everything, but even getting the best characters can take a lot of time. Take Bossk, for example. He’s my favourite Bounty Hunter (who in my humble opinion stands head and shoulders above the inferior Boba Fett), but to unlock him, I would have to complete multiple side missions to even get close. Unless you’ve found the rumour within a level, spending studs can give you the clues to how certain characters or ships can be unlocked. I spend thousands of studs to realise I needed to play through multiple Episodes and finish a variety of missions to get him.

This goes for practically every character that isn’t naturally unlocked through playing. Even then, you’ll need to spend studs to get them. By destroying everything in sight, studs start to fill up, but it’ll require a hell of a lot of playing to come close to getting the characters and ships you love. There’re also a lot of characters you’ve probably never heard of. I’m a huge Star Wars nerd, but even I hadn’t a clue about some of them. You don’t need to unlock everything. It won’t stop you from progressing, however, if you’re a completionist, make sure you have a good clean break in your schedule. 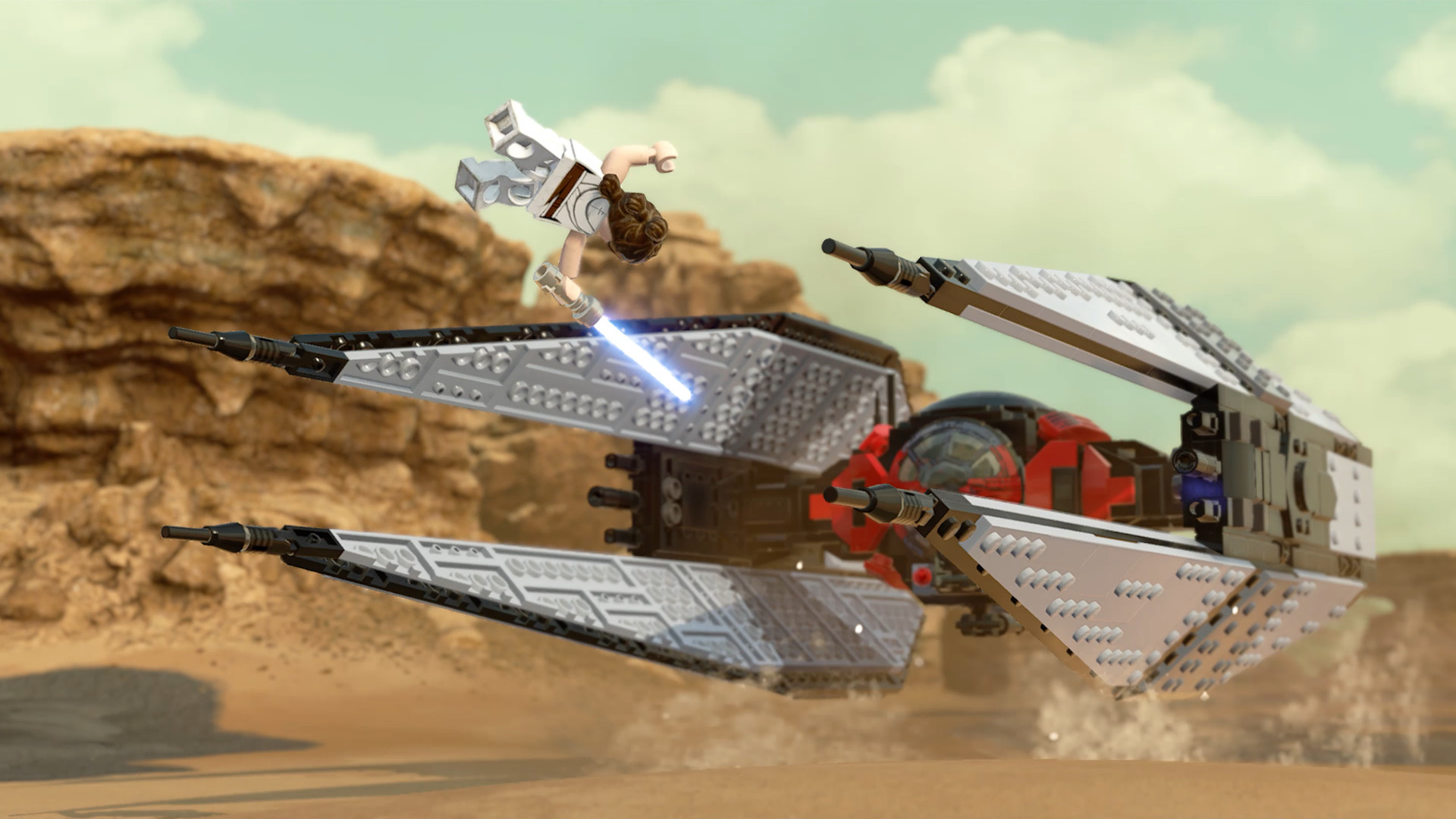 Journey across the galaxy

When you’re not trying to blast through the story, you’re free to explore every nook and cranny across the galaxy. It’s overwhelming at first, especially when you see the sheer amount of collectables on offer. In Free Play, a lot of paths are blocked due to not having a particular class available. Early on in The Phantom Menace, I was on Mos Espa and I needed a Scavenger to get across the rooftops. Luckily, I had Kuiil from The Mandalorian DLC. When I got in position, an icon appeared relating to a certain ability. I had no idea what this meant, and it wasn’t until a mission during Return of the Jedi that it came available. This is one example of some things not being explained particularly well.

TT Games’ brand of humour features throughout LEGO Star Wars: The Skywalker Saga. Like any great family film, there’re jokes for kids and adults alike. I laughed at the sillier moments, but also the self aware stuff such as the reimagining of Darth Vader’s famous “Nooooo!” from Revenge of the Sith. Some might not like the simplicity of the difficulty, but the authenticity is remarkable. Movie dialogue hits when it needs to, with a respectable voice cast featuring returning actors from the franchise, and the Saga’s score is present in every rousing moment you hold dear. There’re plenty of sad moments from the movies, but these are handled well – often with humour – and help to keep the general tone upbeat and amusing. 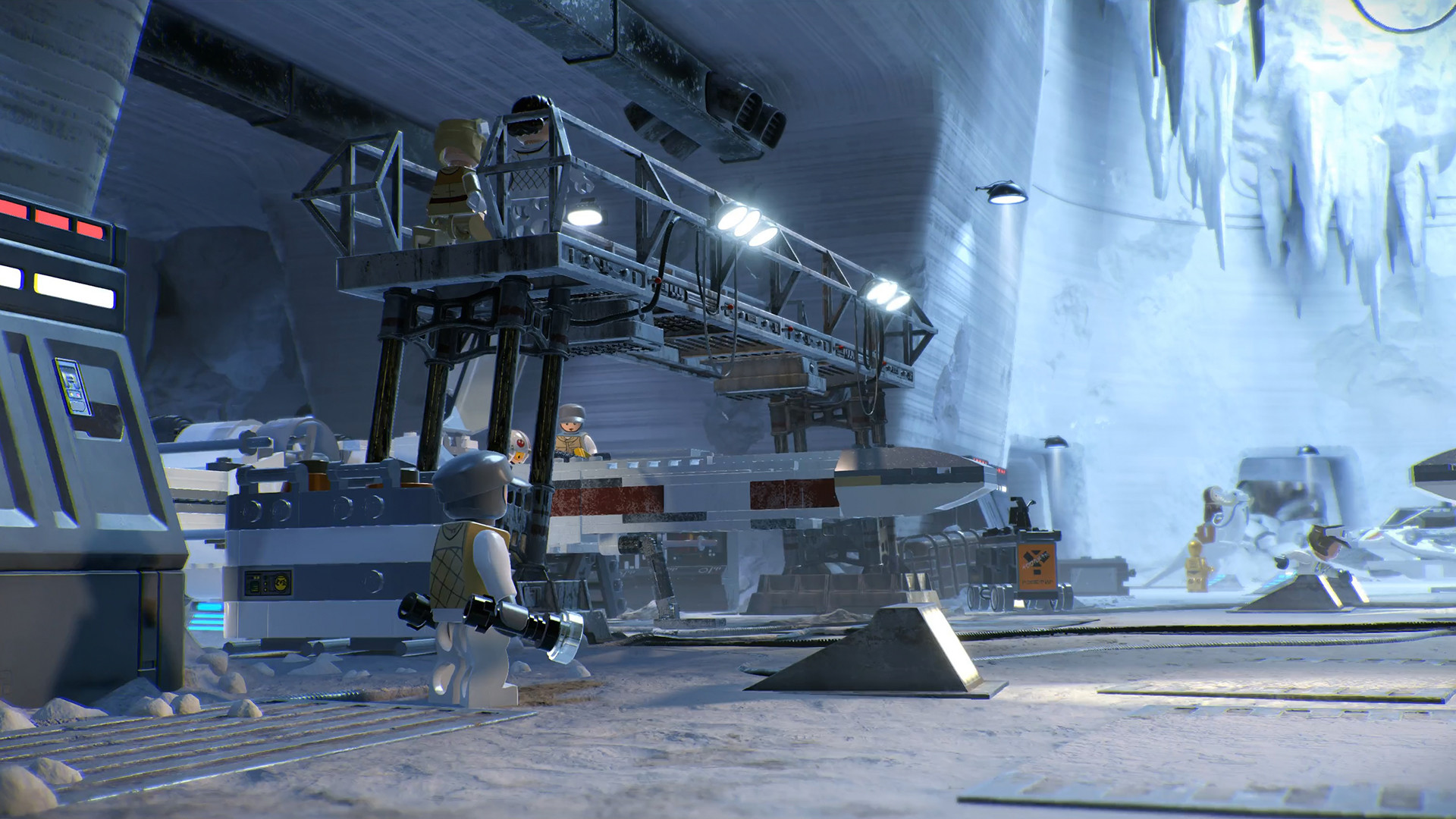 LEGO Star Wars: The Skywalker Saga: Do or do not, there is no try

Unfortunately, I had some weird bugs that happened, which I hope don’t hinder your enjoyment. The fight on Mustafar was completely blurred and made it hard for me to enjoy. Trying to locate Luke on Hoth resulted in the game’s camera locking me out of the picture, unable to move or get back to the game. The camera was a consistent thorn in my side, especially when fighting close up or moving away after using the force to lift objects, Some characters disappeared, and I was occasionally locked out of the screen as everything else carried on as normal in the background. I put around 20 hours into the game, and these only accounted for around 15 minutes of my entire playthrough, but they were still annoying nonetheless.

LEGO Star Wars: The Skywalker Saga is a faithful and fun homage to the legacy of Star Wars. Whatever your feelings are on the prequels or the recent trilogy, there’s no room for grumbling about them here unless you’re referring to the camera concerns. TT Games makes all nine films feel fresh, bringing them together in an exciting way. Gameplay does become repetitive, and some of the moments aren’t given the same time as others, but generally, there’s something to love in every episode.

LEGO Star Wars: The Skywalker Saga is filled with some good ideas and some nice mechanics. Despite looking amazing and feeling authentic, the camera angles and repetitive gameplay will grate on some people.

You may also like
legoLego Star Wars: The Skywalker SagaPC