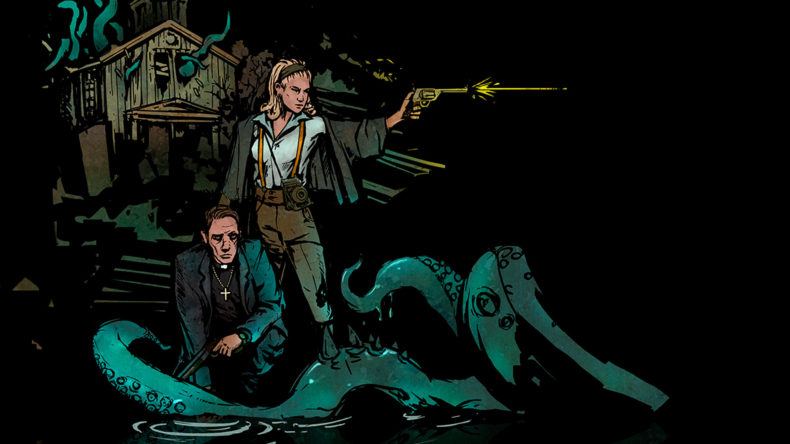 As I blasted my way through Forgive Me Father, a thought occurred. Well, several thoughts occurred, but most of them were about chocolate. The important one, though, was that Forgive Me Father feels like a game constructed around a central premise that was probably conceived long before it was developed. Someone had an idea for a game about a Catholic priest in the Prohibition era going up against cosmic horrors like Cthulhu and Shub Niggurath, and worried about little things like genre and context later.

Then like a stick plunged into a candyfloss machine, the premise slowly grew, acquiring a hodgepodge form to please the masses. And like candyfloss, the resultant creation is both enjoyable, but ultimately fairly insubstantial.

Forgive Me Father is an old school “boomer shooter”. That is to say it’s a first person shooter in the mould of the original Doom, Wolfenstein, or Quake. The mechanics are simple: you point and shoot, strafing madly to avoid damage, with little in the way of character animation or complexity. That said, Forgive Me Father does have some depth. 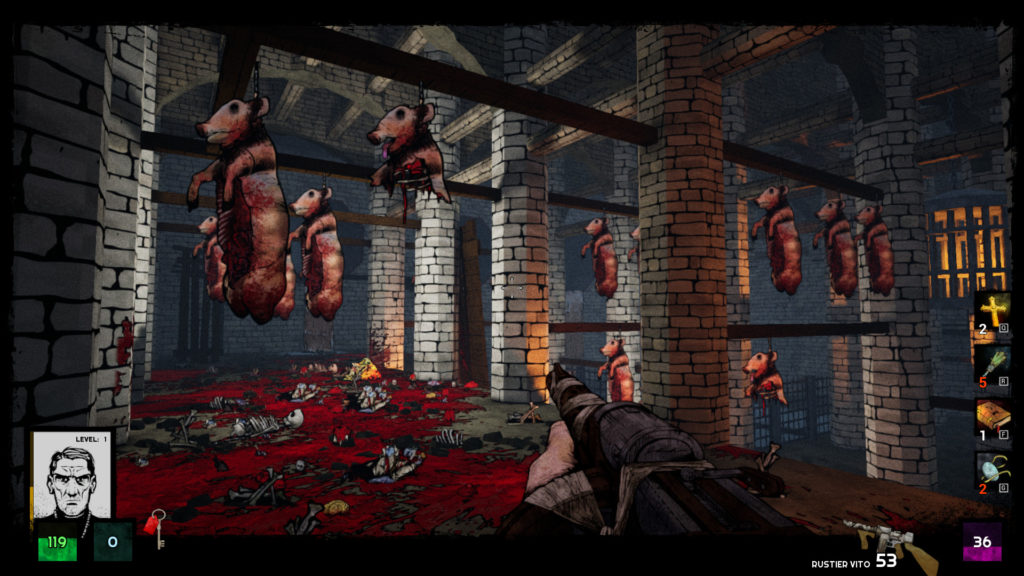 Your hard-drinking protagonist is the only sane person left in a world beset by Lovecraftian horrors. Whether you choose to play as the Priest or the Journalist, you’ll be up against legions of zombies and mutated horrors. A weapon upgrade system allows you to choose one of two paths for each of the 8 weapons you acquire, which adds a degree of strategy to the otherwise fairly straightforward shooting.

The vivid art style lends itself well to the otherworldly horror theme, with dark, foreboding environments inhabited by larger than life monstrosities. There’s a comic book style at work, rewarding you with splashes of onomatopoeic vibrancy for your trouble. Across twenty-five levels, you’ll be required to navigate gloomy corridors, zombie-infested hedge mazes, gothic churches and abandoned streets.

Shooting is best on mouse and keyboard, though I had to drop the sensitivity considerably to find a comfortable level. Enemies come at you quickly, and headshots are more effective. Some areas plunge you into total darkness, and you’ll need to use your lantern to see where you’re going. Frustratingly, this lowers your equipped weapon – even if you’re using a pistol. There’s absolutely no need for this to happen other than to arbitrarily restrict your vision, but it does add tension. 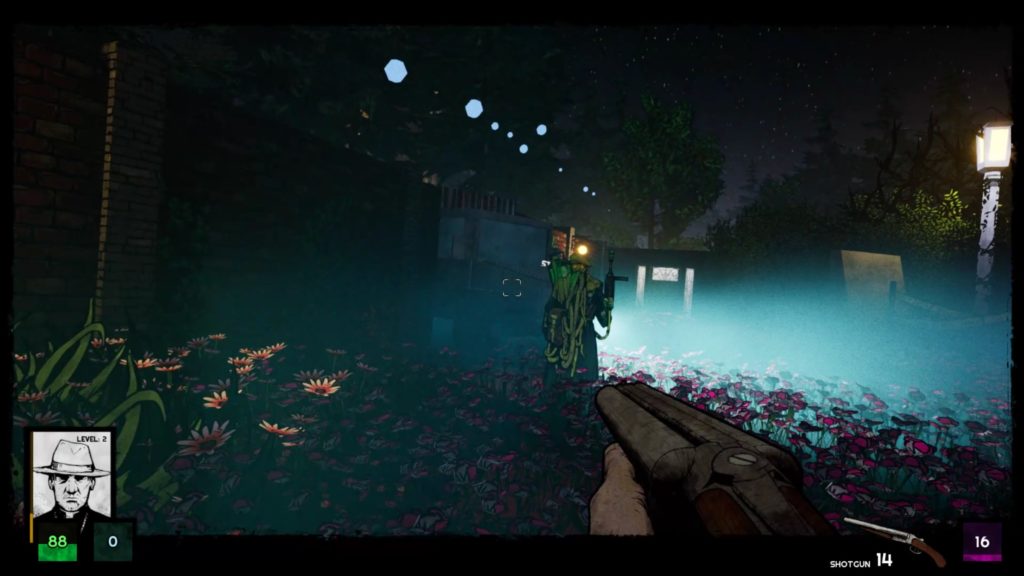 Unsurprisingly, Forgive Me Father has a “madness metre”. This will fill as you take down enemies, but weirdly the higher it gets, the stronger you get. In a world where you’re literally the only sane person left, you’d think madness would be something to avoid. Instead, it makes you take less damage while dealing more.

Health and ammo pickups are scattered around each level, but Forgive Me Father delights in setting traps for the desperate. With save points spread wide, you’re often on the verge of running out of ammo. There’s no manual reload, and so it’s easy to run your ammo right down to dangerous levels and not realise. Then you’ll see a couple of boxes of shotgun shells within reach and – bam! The floor gives way or the lights go out and you’re surrounded.

If you find yourself pushed into a corner and mobbed by zombies, you’re probably going to die. Later levels add ranged attackers to the list of things to not get eaten by, and the frantic strafe-shooting turns into something akin to a bullet hell. Forgive Me Father is deliberately challenging, and even lowering the difficulty doesn’t feel like it makes that much difference. 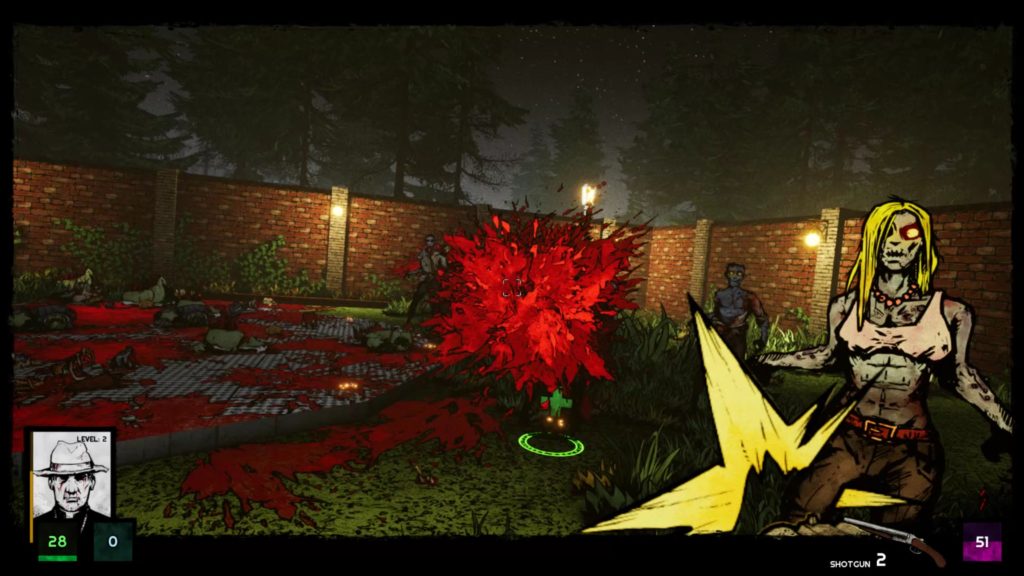 Sadly, all the character-building RPG elements and weapon upgrades aren’t supported by much of a story. Narrative details are thin on the ground, and items that add flavour to the world are labelled in big white letters saying STORY. The last thing you want to do when you’re blasting your way through a warehouse full of evil abominations is stop to read the morning newspaper, and so I for one failed to absorb most of what I was seeing. I don’t know that what I did absorb added much context to things. It’s mostly flavour text about characters you’ll never meet and events that happened in the world as it used to be.

The result is a shooter that feels almost purely mechanical. Yes, there’s a decent atmosphere of general dread, but you move through the world far too fast to appreciate that. And yes, the enemies are grotesque and pretty scary if considered in a vacuum. But you reduce them to globs of red toothpaste too quickly to pay much attention to their visual design. Every few levels I found I had to stop, as the gameplay began to feel a little repetitious and dizzying. 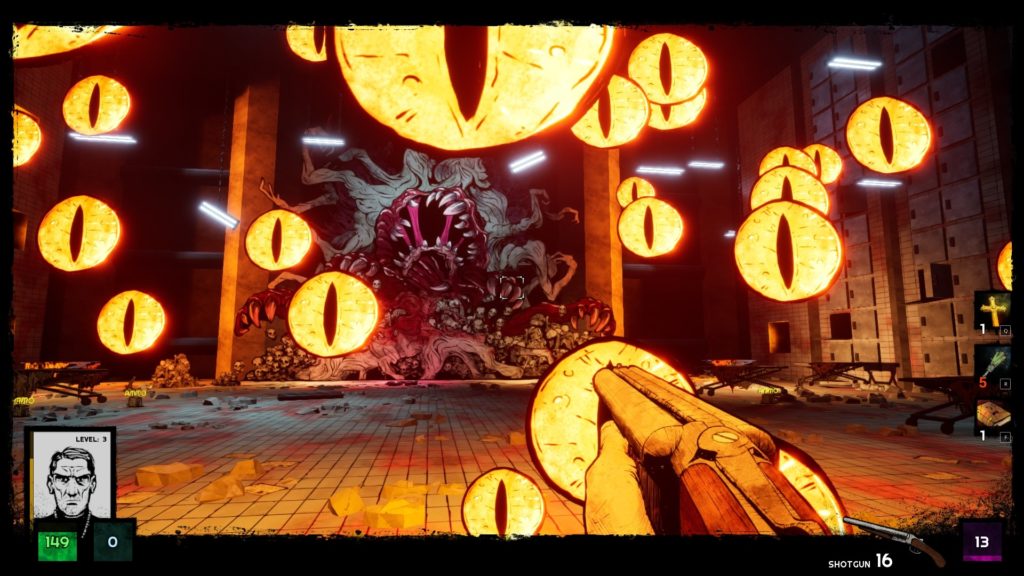 With secrets to find in each level, and different skill trees for each character, there’s a certain amount of replay value here. You can also jump into the endless mode if you want to, which allows you to set certain parameters such as difficulty and weapon loadout before diving into wave-based arenas filled with endlessly respawning zombie scum.

Forgive Me Father is certainly atmospheric and a lot of fun, but fans of retro boomer shooters will find much more to like than those who prefer a more modern approach. The cool art style, thumping soundtrack and slick, frantic shooting combine to provide an experience that is both thrilling and cathartic, but ultimately a little shallow.

Can feel repetetive
Story takes a backseat
Nothing new

Forgive Me Father is certainly atmospheric and a lot of fun, although fans of retro boomer shooters will find much more to like than those who prefer a more modern approach.