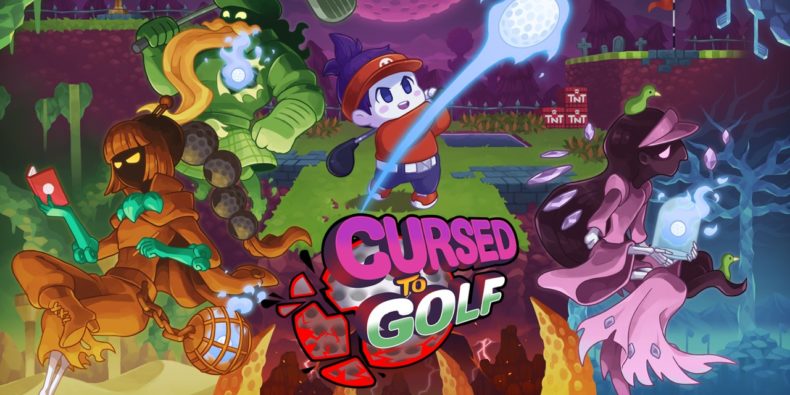 I don’t know why I love golf games so much. The real life sport of golf does nothing for me, but something about planning the perfect shot and executing it for a cheeky birdie just works for me. From Tiger Woods PGA Tour 2005 to Mario Golf, I’m happy to dive into serious or silly when it comes to golf games. Cursed to Golf is definitely closer to the silly column, just in case the fact you’re playing golf in the afterlife didn’t give it away.

When a bolt of lightning hits our hero as he swings back his club to sink the winning shot at a massive golf tournament, “The Golfer” finds himself in golf purgatory. Trapped by a mysterious foe called The Greensman, our sporting protagonist is informed that in order to escape this world he’ll have to play through 18 holes. This would be just another day at the office for him, if this was any other golf course.

Golf works a little bit differently in Cursed to Golf. Each hole takes place in a labyrinth of fairways, hazards and caverns, and it’s up to you to find a way to get your ball safely to the hole. You only have a set amount of shots to sink that sucker though, or in true Roguelike fashion it’s back to the clubhouse for you. 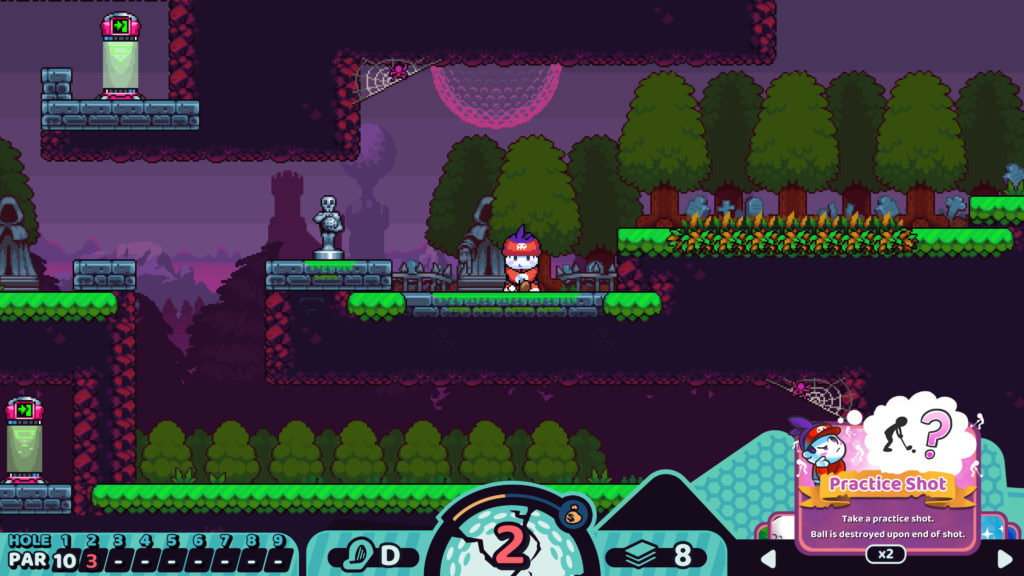 As is traditional in the wonderful world of golf, you’ll start by choosing a club (you have a Driver, an Iron and a Wedge) then press A in time to the power meter’s movement to see how far you’ll send the ball. Then it’s time to hit the button to whack it in the trajectory you want, as shown by a handy flight path. Timing is everything here, and if you get everything right you might actually end up with your ball on the fairway instead of in the water.

Perhaps more important than how hard you hit the ball though is the spin you put on it. You can apply spin at any time, and it’s incredibly powerful. The right amount of spin can help keep your ball out the water, give you the momentum to make it over a tricky bunker, or even roll the ball backwards and then forwards to get to past annoying ledges. If you master the spin you’ll be in the hole in no time.

Making your way to the hole is only half of the battle in Cursed to Golf though, as in most levels the 5 shots you start with aren’t enough. That’s where the gold and silver statues littering the course come in. Smashing a silver one of these fancy skeleton statues will give you two extra shots, whereas nailing a gold one will give you four more. As you might expect though they aren’t exactly in easy to access locations, so you might need a little help from your deck of Ace Cards.

At the start of each run of Cursed to Golf you’re given a deck of Ace Cards, which when activated will grant you all manner of special powers. One Ace Card can be used when your ball is mid flight, and sends it straight to the ground. Another splits your ball into three balls and lets you choose whichever lands in the best spot to play from. My favourite though is the rocket, which gives you full aerial control of the ball and makes all but the toughest obstacles trivial. Ace Cards truly are the only way to survive in Golf Purgatory. 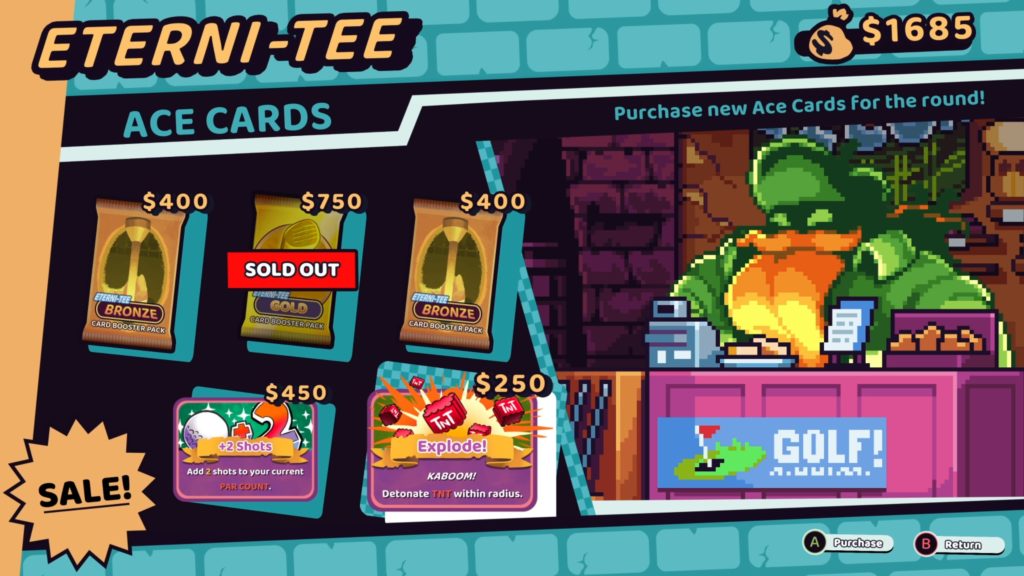 Don’t worry too much about using them all up though, because you’ll get access to plenty more in between holes. There are tons of pro shops in the world of Cursed to Golf, and you can spend the money you make beating each hole on random packs of cards at them. The more shots you have left at the end of a hole the more money you’ll be given, and the more handy cards you’ll soon have in your deck.

Like many other Roguelikes, Cursed to Golf features multiple paths you can take through a run that each come with their own risks and rewards. Do you want to play it safe and take on a regular hole, or would you rather get a free pack of cards and be faced with a tougher cursed hole instead? It might sound intimidating, but nobody ever said ghost golf was easy.

Cursed levels are much harder than regular ones, because of (surprise) the curses. Every few shots a new wacky rule will be imposed on you, which will make your next couple of shots a nightmare. Maybe the entire screen will flip upside down, or maybe you’ll only be allowed to hit the ball in one direction. Whatever the curse is though, it’ll probably cost you a shot or two if you’re not careful.

Cursed holes aren’t the only thing you’ll need to worry about in Cursed to Golf, you’ll also have to take down some tricky golf bosses. The levels housing these ghostly opponents are functionally the same as the other levels, but with you competing to reach the hole first. If you’re struggling there’s a new type of statue available to help you though, which will stun your rival golfer for one turn and let you sneak ahead. These fights are fun, but once you beat them once they don’t appear in future runs. 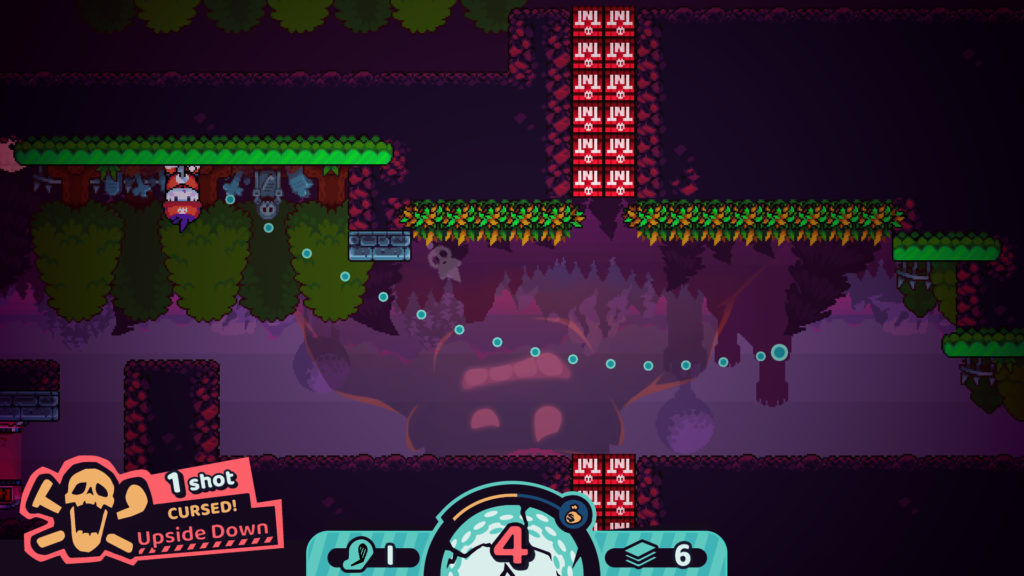 Beating these bosses will also grant you powerful new abilities, which ultimately kind of ruin the difficulty curve of Cursed to Golf. Getting 5 extra shots on every level makes the difficulty of the early levels trivial at best, and the power that allows you to keep the cards you gather on the next run is flat out broken. I understand that the developers were trying to give you a sense of progression between runs, but these powers really detracted from my enjoyment of the challenge of the game.

Another issue I had with Cursed to Golf involves the tutorials. Every single mechanic in the game is overly explained, and once you’ve been taught what they do you’re expected to demonstrate them over and over again in very specific situations. After the first couple of hours this won’t be an issue, but it certainly makes the start of the game feel like a bit of a slog.

Cursed to Golf is a novel take on my favourite gaming sport, but ultimately some wonky balancing and excessive tutorials prevent it from being a great game. If you’re a fan of golf games though, Cursed to Golf adds some Roguelike randomness into the mix that you might just love.

Cursed to Golf is a very unique golf Roguelike, but balance issues and a few too many tutorials will put some off.