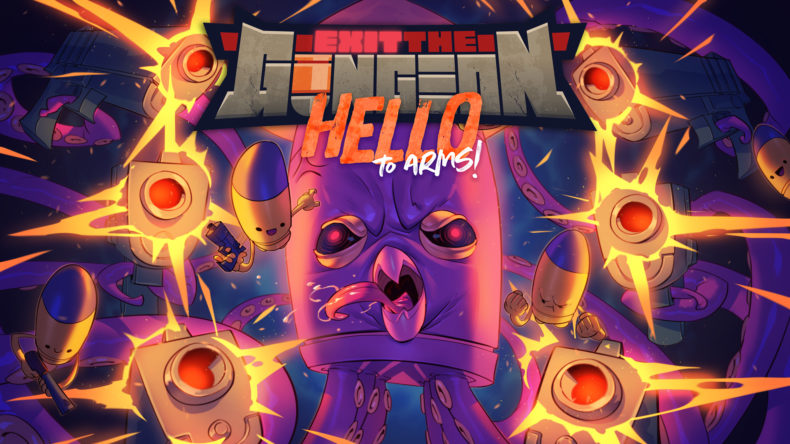 Video games are home to some amazing fictional firearms. From the simple but effective Lancer to Turok’s brain burrowing Cerebral Bore, there are countless creative guns to blast at your enemies in gaming. In 2016, Enter the Gungeon used this rich history and a heavy dose of creativity to create a Roguelike with hundreds of wacky and unique weapons. With bullet hell elements and a steep difficulty curve, it quickly became one of my favourite games to play when I had half an hour free. Earlier this year Exit the Gungeon took the franchise in a new direction, with a side-on perspective and more arcade-style gameplay. The recent Hello to Arms update adds a ton of content to the game and puts a beautiful bow on this spin-off Gungeon game.

After your success in the original game, the titular Gungeon is falling apart. Instead of exploring floors for loot and delving deeper into its bullet filled corridors, you’ll now be frantically rushing upwards and out of this crumbling structure. After a brief tutorial on how to survive the threats ahead of you from one of many charming and funny NPCs, you’ll be thrown into countless failing runs as you attempt to Exit the Gungeon.

In Enter the Gungeon, dodge rolling was the key to dodging the walls of incoming bullets and staying healthy. The handy skill makes its return here, but with a vertical twist. Jumping is considered a “Vertical Dodge Roll”, which means that any time you spend in the air you are completely invulnerable to damage. It’s an ingenious way to make the incoming projectiles feel less overwhelming, but you’ll need to make sure you have a safe area in mind for landing when you become vulnerable again. 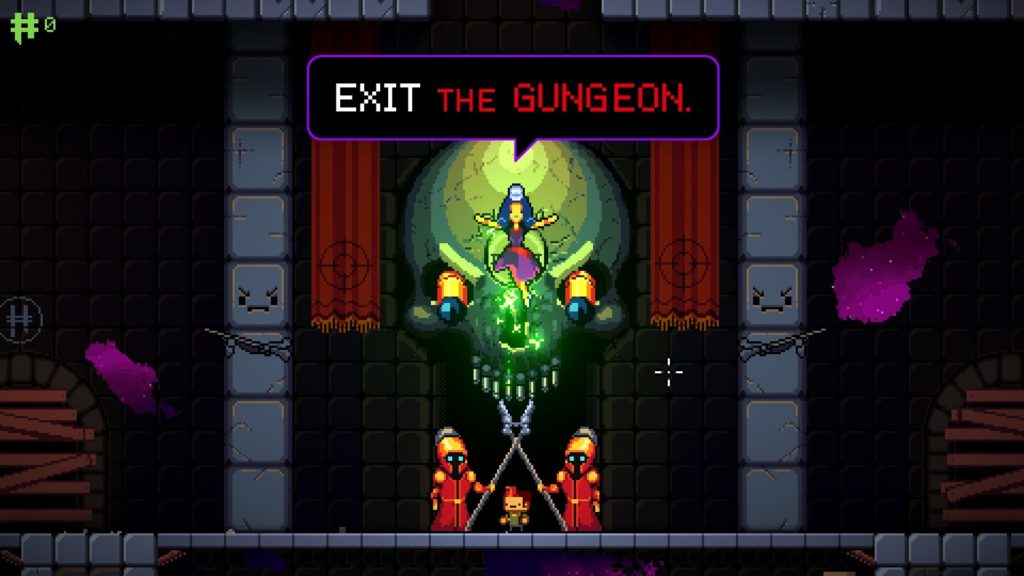 Each stage is generally a single platform where you’ll fight off foes while being propelled toward the Gungeon’s exit. As an elevator or train carriage barrels through the ruins, you’ll need to dispatch the enemies in the mini arena while avoiding the hazards of each area. One stage sees you riding a platform held up by balloons, which regularly get popped destroying parts of the environment. Another elevator ride can be controlled horizontally by switches, enabling you to dodge floating mines that release extra bullets if you collide with them.

In the standard “Blessed” mode, your weapon is empowered by a deity and will randomly transform into a different weapon. One minute you’ll be firing from afar with a machine gun, then in a flash you’ll have a Blunderbuss equipped that is useless unless you’re pressed up against an enemy. When you kill enemies your combo meter will build, and as long as you don’t take damage will continue to rise. The higher your combo, the better the random weapons you get will be. This makes the whole affair feel much more arcadey, but this isn’t necessarily a bad thing. 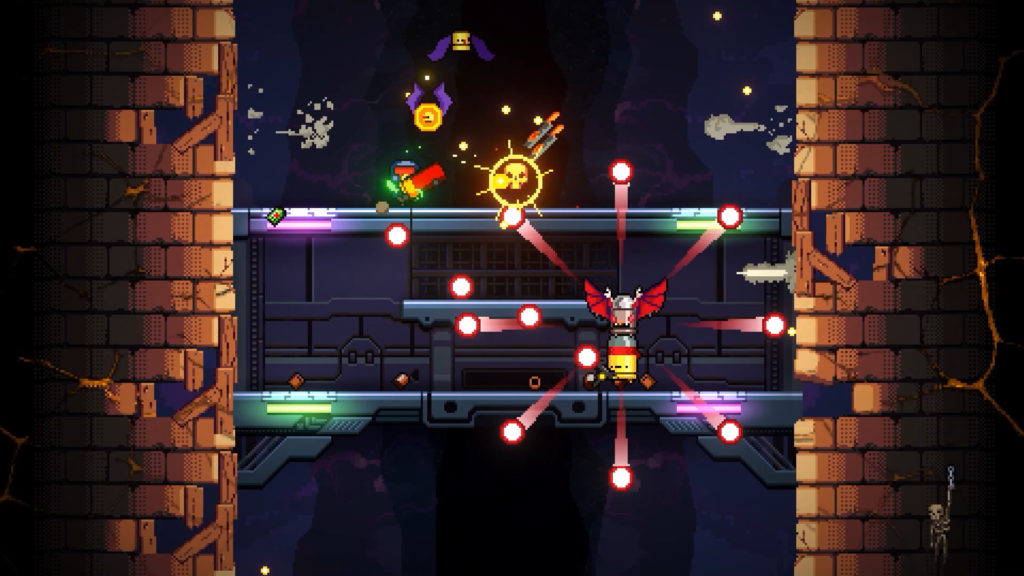 Since you can’t control what guns you’ll be using, it’s important to spend your money sensibly between stages. The shop stocks all sorts of passive buff items (which can also be found in smaller optional rooms in the same hub area) as well as health, armour, and blanks that wipe the screen of projectiles. The various items can make all the difference during a tough stage, and range from simple health upgrades to jump height boosts.

Although each time you die you’ll have to start again, there is a level of permanence in Exit the Gungeon. Any characters you rescue from prisons throughout the Gungeon will take residence in the hub you visit between runs, offering a variety of services. Any bosses you beat drop credits that you also retain, which can be spent to add new guns to the random pool, or even items that’ll turn up at the shop.

The new Arsenal mode added to Exit the Gungeon in the Hello to Arms update changes the game in a huge way. Although you still have your usual randomly cycling weapon, you’ll also find un-blessed guns as you go. These guns can be swapped to any time your random gun isn’t the right tool for the job, but they only have a limited amount of ammo. Whenever you have an un-blessed weapon equipped, you can also see what your random gun transforms into so you don’t miss out on a powerful weapon. 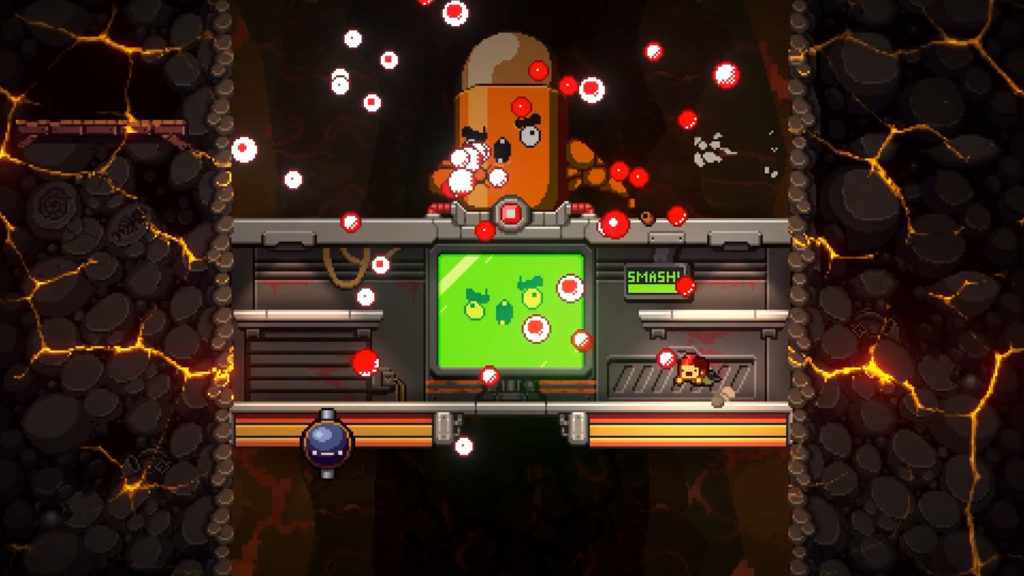 The guns in Exit the Gungeon are truly creative and really fun to use. Although there are a decent number of firearms that you’ll recognise from a standard shooter, the vast majority are off-the-wall and amusing. There’s the Directional Pad that fires bullets out of each of it’s directions, the Lower Case r that fires the letters that spell BULLET, and my personal favourite – a Mario brick that fires green, red and blue shells that have the properties they do in Mario Kart. Getting to know how each gun works is essential if you want to survive when it’s thrust into your hand.

The enemies you find in the Gungeon are just as interesting as the weapons, and are all gun themed. There are basic enemies that are bullets, shells and sniper rounds, which all fire their respective weapons at you. The bosses especially are particularly creative, and this is summed up perfectly by the newly added terror that is The Gloctopus. With a gun in each of his 8 tentacles, anyone but the most experienced Gungeoneers will perish to his mollusc might. 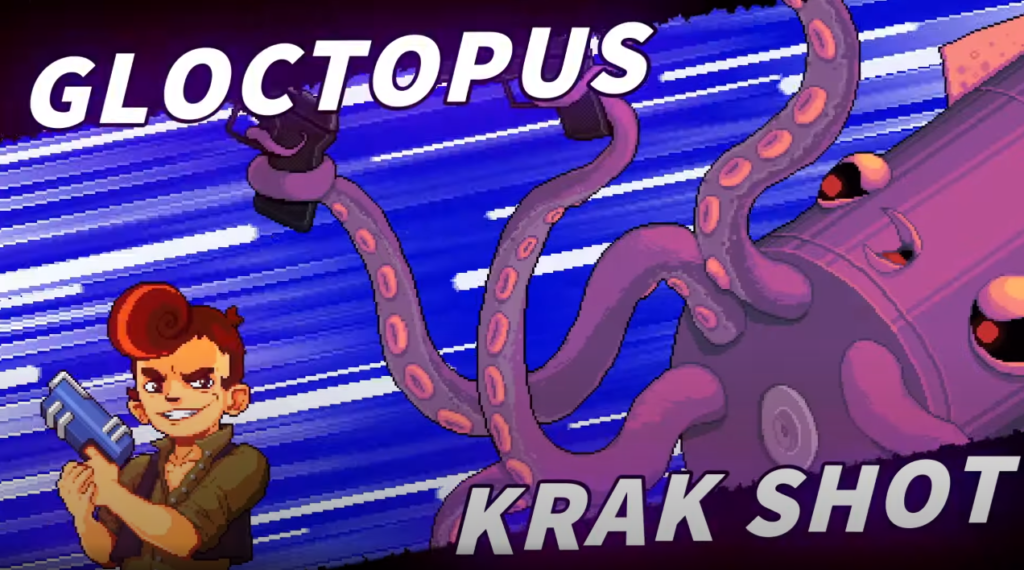 Although I really enjoyed my time with Exit the Gungeon, I did have occasional frame rate issues in the more hectic areas. In such a precise game these frame drops were fairly off-putting, but fortunately, they aren’t particularly frequent.

Exit the Gungeon is an absolute blast, packed full of charm, challenge, and arcade action. The unique midair immunity mechanic means the dodge based gameplay is incredibly satisfying, and quite unlike anything I’ve ever played. The framerate issues might occasionally frustrate, but the sheer amount of delightful Roguelike content (especially with the Hello to Arms update) makes Exit the Dungeon well worth a purchase.

Occasional frame drops
Some items are a little dull

A charming arcadey Roguelike, Exit the Gungeon: Hello to Arms takes randomness to a new level with delightful results.