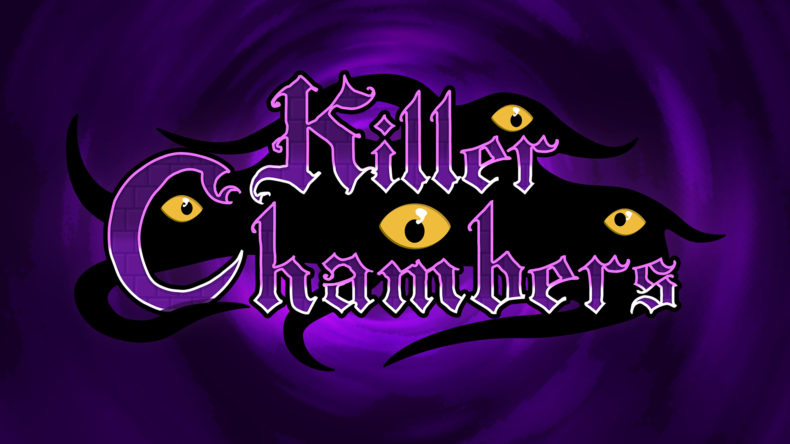 Having to memorise incoming threats in a video game isn’t usually necessary nowadays. It was pretty common in classic 8-bit games to be expected to memorise an attack pattern or two to beat a boss, or otherwise face near instant defeat. I can still remember the exact order of blocks that fly from the Yellow Devil in Mega Man, and after years of practice and loss I overcame this aggravating foe. It can be incredibly rewarding to finally overcome a tough fight by learning what order you need to dodge attacks in, but when more memory is needed than skill it’s easy to get annoyed. Killer Chambers attempts to balance this frustration, while forcing you to dodge incoming traps in a tiny room.

Brave Lord is just trying to enjoy a delicious unhealthy meal, when news comes of an attack at the castle. Upon arriving he discovers that the King is dead and the spooky Lord Grave is to blame. Our hero is immediately killed by an arrow trap, and after respawning realises that he can keep trying to survive the deadly traps of the castle and overcome his spectral foe. The writing is engaging and a legitimately funny way to hold together the stages.

Each level of Killer Chambers is a tiny room (or chamber) that unloads a pattern of projectiles against you. Using your limited moveset of jump, duck and small jump, you’ll have to dodge the incoming attacks without taking a single hit. With each death you’ll be flung back into the action immediately, resetting the room and starting the punishment all over again. 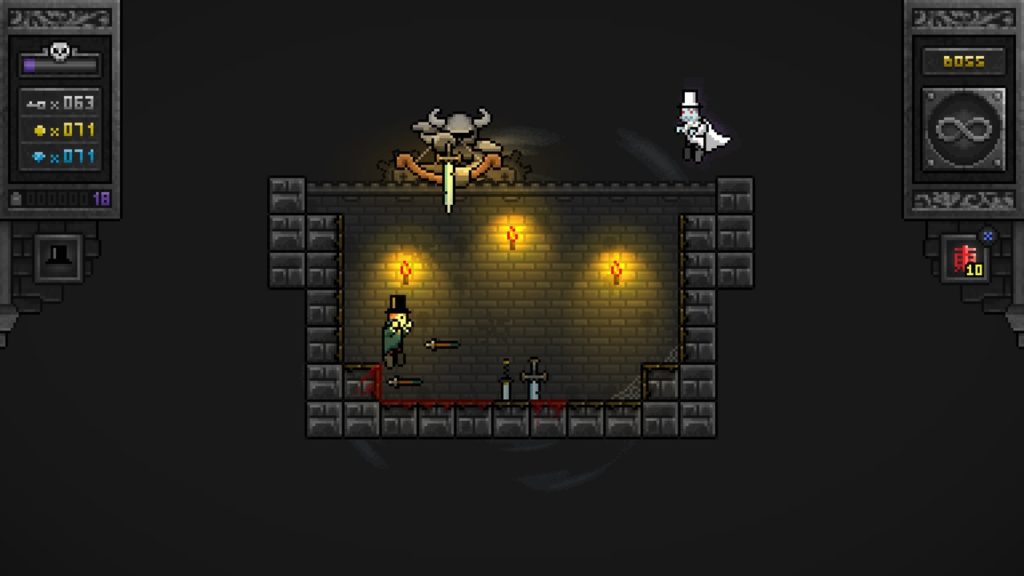 It’s a simple concept, but not one that’s lacking in depth. You’ll start by facing simple arrow traps, but after a couple of hours, there’ll be lava, crushing blocks, and bouncing spiky balls all coming to end your attempt at a room. All of these rooms can be beaten within a minute, but many of them took me over half an hour as I slowly lost my composure.

Deadly Chambers is a truly difficult game. If you don’t remember what’s coming and input your commands flawlessly, you simply won’t progress. Even within the first few stages, you will die over and over again, and sometimes you’ll feel pretty bad about it. If you don’t have the patience of a saint, you’ll likely get more frustration than enjoyment from the sickening difficulty.

As if the standard level of difficulty wasn’t enough, each stage has two tougher versions to play with far more complex patterns to remember. In most games this tough I’d probably avoid these challenges entirely, but unfortunately beating these stages is the only way to get coins and gems for the shop. 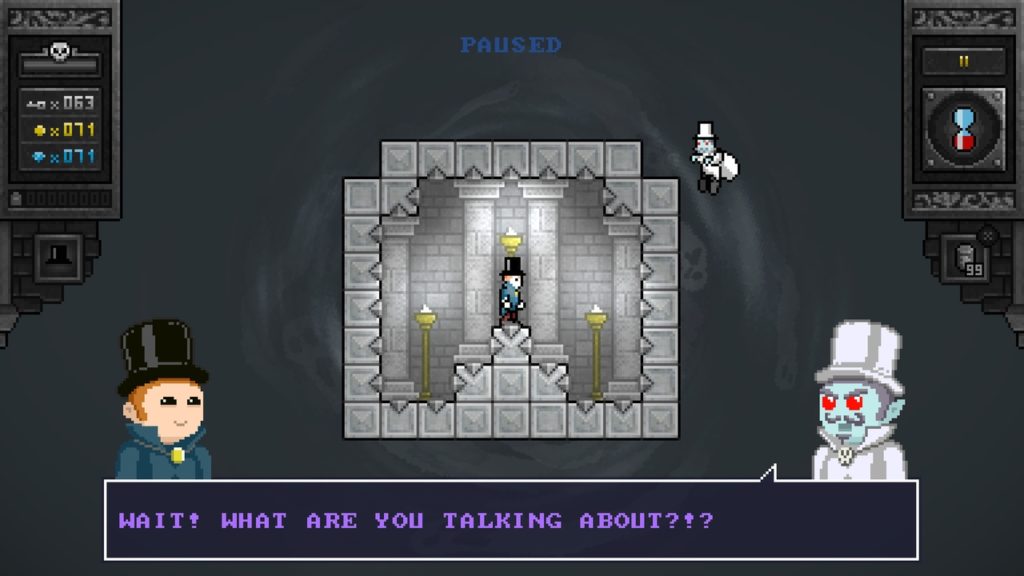 To progress further into Killer Chambers, you’ll need to make the most of your cash and gems to give yourself an advantage against the constant stream of death. Each world has a shop where you can spend your hard-earned loot on items that will hugely improve your chance of survival. Coins are spent on items you can use mid-level to block traps, descend slower or even blow up all the projectiles on a screen. Gems (which are only obtained from the hardest difficulty level) unlock equippable hats that give you a constant bonus, like an extra hit if you take damage to the head.

As much as I appreciated (and frankly needed) these helpful tools on my adventure, having to beat a tougher stage to get the items you need to cope with even the standard difficulty doesn’t make much sense. Throughout my time with the game, I only purchased a single hat, because I simply struggled too much with the tougher remixes too much to afford more. 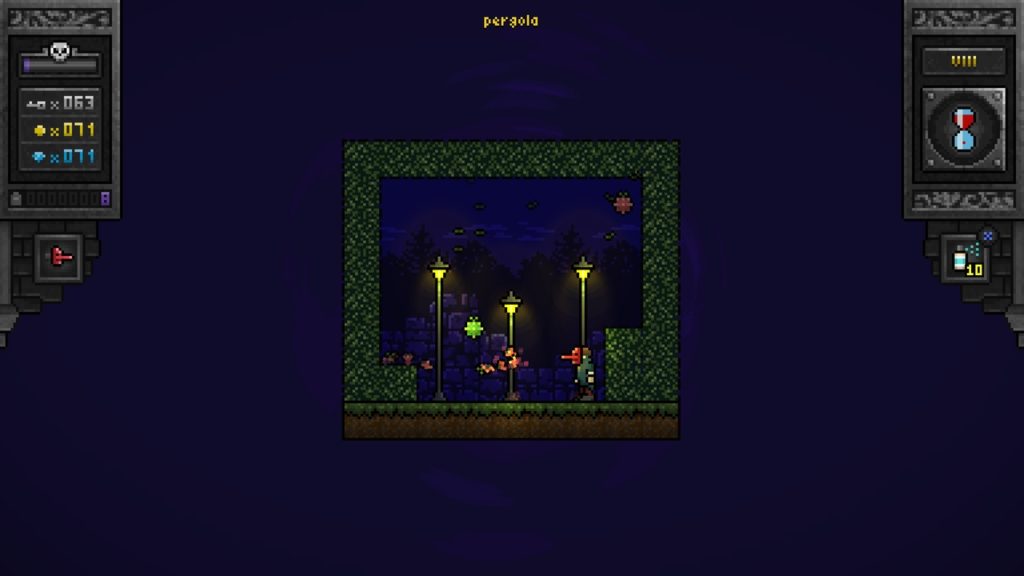 Although it doesn’t happen often, there is actually a punishment for dying. Each time you perish a purple skull meter fills up slightly. This doesn’t decrease between stages, and when you inevitably fill it you’ll be sent to another dimension. This spooky world contains an extra stage that you’ll need to beat before you can continue your quest. Although this sounds needlessly cruel in an already difficult game, I actually enjoyed these levels so much that I didn’t mind being forced to survive them.

Killer Chambers is an interesting concept for a game, that I ultimately found more frustrating than enjoyable. It’s very satisfying when you finally beat a stage, but the amount of suffering you’ll be put through to do so just isn’t worth it. There’s definitely an audience for this game, but unfortunately, I wasn’t part of it.