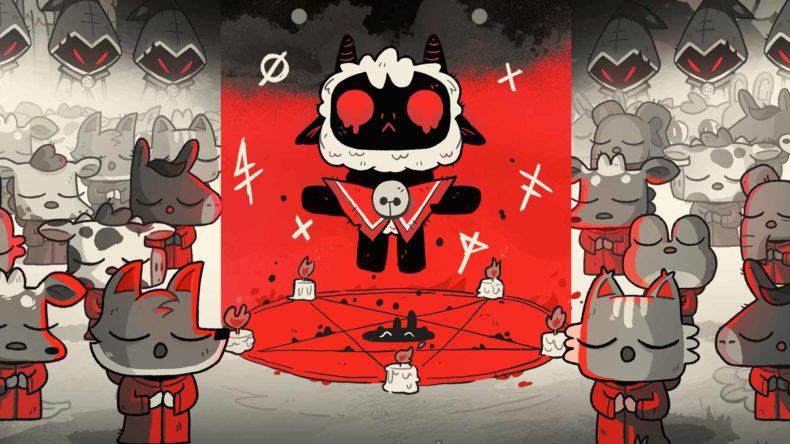 So it’s probably not a great thing to admit, but I can definitely see the appeal of being a cult leader. Okay sure ruining the lives of people for your own benefit is a bad thing to do, but having an army of loyal minions to help with the washing up and make me feel important would be pretty great. I doubt I’ll be in charge of a cult any time soon though, so I guess Cult of the Lamb will have to do.

As a poor innocent lamb on the way to be sacrificed to four ancient gods, life isn’t looking great for you. Fortunately for our fluffy protagonist a mysterious chained entity known as The One Who Waits has a plan in mind. If you agree to start a cult in his name he’ll grant you the powers you need to take down the baddies about to slice off your head. Obviously you accept, and your life as a cult leader begins.

Any good cult leader knows that you need to look after your devoted followers, and you’ll spend a lot of your time in Cult of the Lamb doing just that. Your flock will only stick around and pray at your shrine if they have a place to sleep, a full tummy and a clean environment, so building up your village to create a somewhat acceptable place to live is the first order of business.

You’ll need materials like wood and stone to make the facilities you need to keep the masses happy, so ordering them to clear out the area for supplies should be an immediate priority. You won’t have the ability to build anything though until you’ve gained enough faith from your followers to unlock it in the skill tree. You’ll start off researching sleeping bags and plots to plant seeds, but before you know it you’ll be making cosy houses, toilet facilities and speakers to pipe your community full of propaganda and get them working harder. Gathering supplies and upgrading your village is a really compelling gameplay loop, with plenty of tough decisions to make along the way. 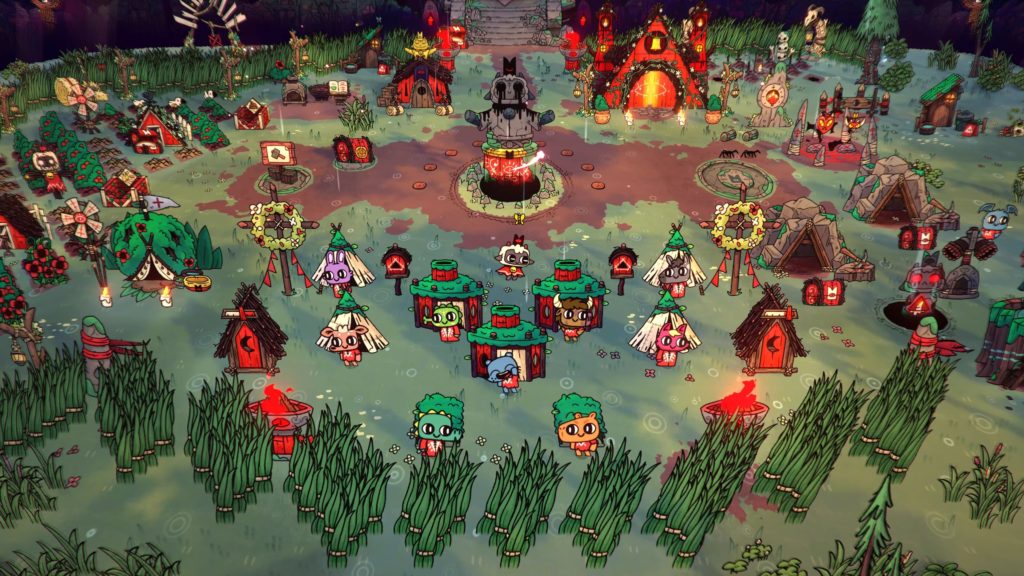 It’s completely up to you how you want to guide your followers. You can try to keep them in line by giving them a decent life, or you can strike fear into their hearts and make them suffer a bit. Nothing stops somebody from trying to start a revolution better than a few days in the stocks, except maybe sacrificing them to the gods in a ritual for all to see.

Although having a load of gullible followers is important, the actual goal of Cult of the Lamb is to destroy the four gods that imprisoned The One Who Waits to free him from his shackles. This is where the roguelike portion of the game comes in, so get ready to grab some gear and fight some cultists.

I should say that I feel the term roguelike is a bit misleading here, because while the dungeon crawling sections of Cult of the Lamb are randomised they aren’t particularly punishing (especially in regards to long term consequences, you’ll just lose a few supplies). Each god’s land is split into four sections, with a boss at the end and plenty to slay in between.

The combat is vaguely reminiscent of Hades, with plenty of melee action and an emphasis on dodging if you want to make it through an area. At the start of each run you’ll be given a melee weapon and a curse attack, which both come in all shapes and sizes. There are quick weapons like daggers for combo lovers, hefty axes and even more unique options like claws. The curses are even more varied, ranging from fireballs and homing magical missiles to poisonous bombs and summonable tentacles. 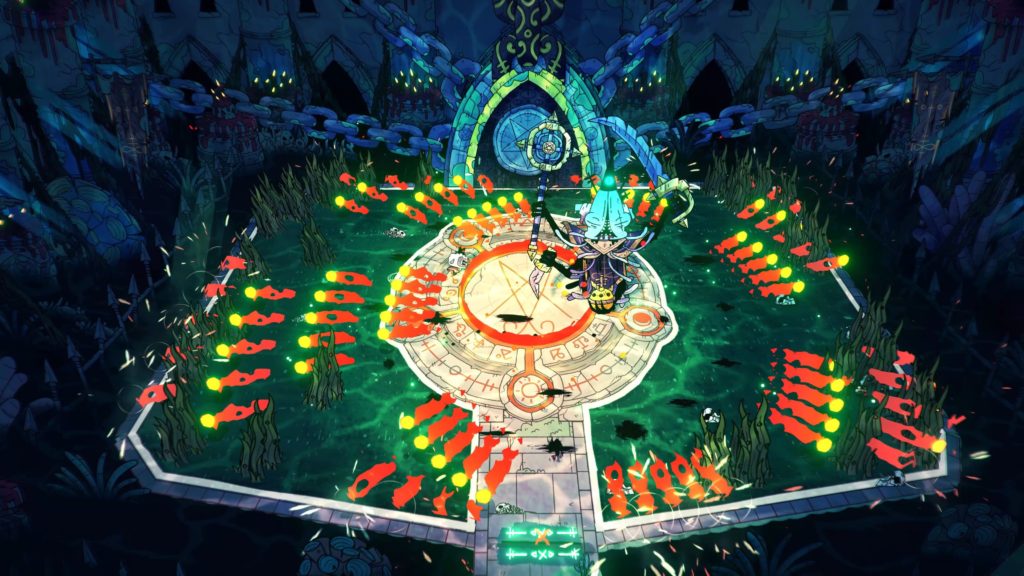 As you go through a dungeon you’ll be given the opportunity to swap your gear for more powerful equipables, as well as offered Tarot cards that give you a buff that lasts for the rest of the run. These power ups are often simple but very effective, with options such as health boosts, an increase to attack speed or even adding damage to your dodge roll. Whenever you find a tarot card room you’ll be given the choice of two cards, and because they’re fairly self explanatory you won’t have to worry about learning a new roguelike language to make the right decision.

Although your main objective is to make it through these roguelike sections to beat the game, it’s also worth playing them to gather some handy resources for your village. When you set off on an adventure you’ll be shown a map full of nodes that dictate what you’ll find on the way to the boss, so choosing the route that will benefit your village the most is key. Maybe you want to gather some berries because bellies are empty at your camp, or perhaps it would benefit you more to try and save an innocent animal and indoctrinate it when you get back. The way the different gameplay sections compliment each other is truly wonderful, and make Cult of the Lamb very hard to put down.

Once you get back to the village after a successful (or not so successful) adventure, they’ll always be something demanding your attention. Each new day offers the opportunity to deliver a sermon at your temple (which grants you points you can use to upgrade the gear you find while scrapping) but there’s also without fail poo to clean up and tummies to fill with delicious bowls of grass.

When everything is settled in your community, you can take a bit of time to look after your individual followers. Each one of these adorable critters has a devotion meter you can level up by giving them blessings, bribes, gifts and other bits of personal affection. Leveling them up will give you pieces of a holy tablet which are hugely important, because when you have enough to create a whole one your can assign a new doctrine to the cult. 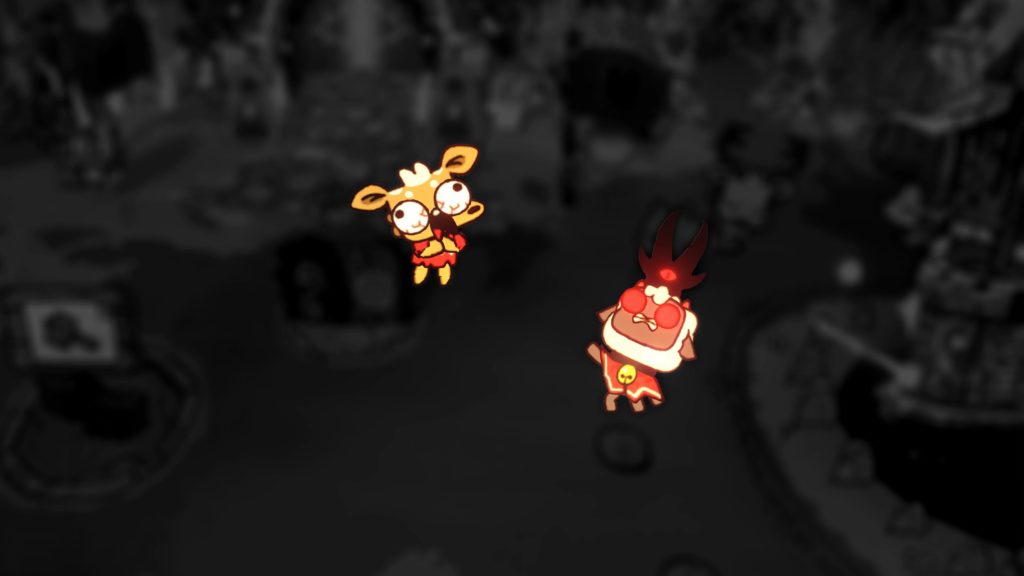 The doctrines are probably my favourite aspect of Cult of the Lamb. These rules you place on your villagers will make your life a lot easier, but you’ll have to pick between two wildly different options. One doctrine might give you the option of learning a ritual that allows your flock to rest for two days to boost morale, while another will prevent them from sleeping for two days so more work gets done. There’s a doctrine to make villagers happy anytime they witness a sacrifice, a doctrine to prevent grass from potentially giving them the shits after scoffing it, and even a doctrine that allows you to walk up to any member of your cult and murder them in cold blood. Choosing different doctrines will change the entire way you play the game, and makes replaying the game even more appealing.

When you aren’t adventuring or building a little slice of heaven, you can explore areas outside the village and meet the locals. In these areas you’ll find all manner of side activities and missions, ranging from a compelling fishing minigame to stores stocking brand new tarot cards. Of all of these, none stole my attention quite like Knucklebones.

Knucklebones is a dice game that you play by placing dice into a 3 by 3 grid to try and outscore your opponent. I won’t bore you too much with the details of this, but I will tell you that it’s painfully addictive and a good way to earn more money for your village. You even unlock new opponents as you progress through the game, and if you’re anything like me will accidentally sink 30 minutes (or more) into it every time you leave home. 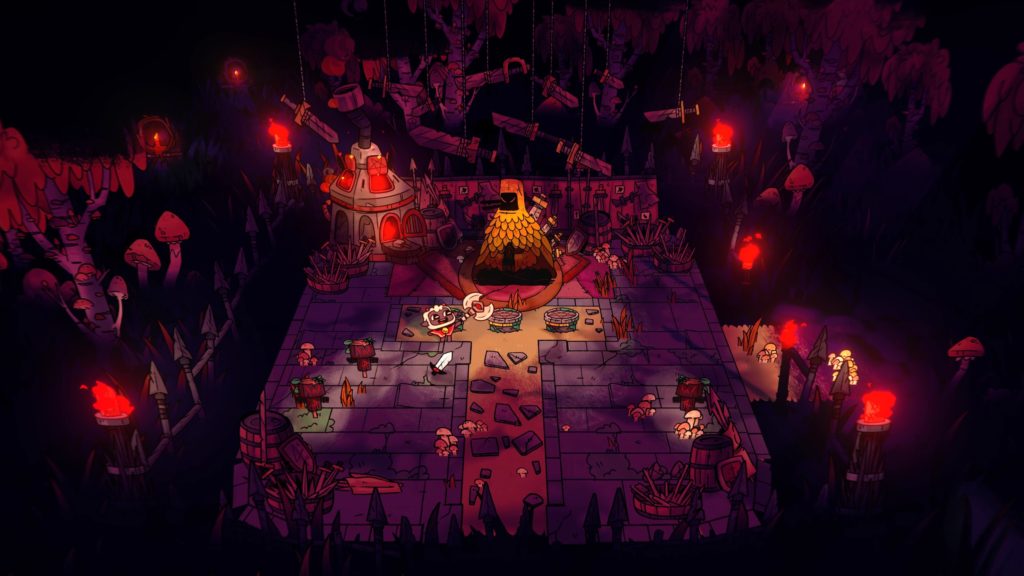 There’s a lot I haven’t been able to cram into this review that Cult of the Lamb has to offer. There are different outfits you can wear that give your lamb avatar massive stat alterations that flip the game on its head. There are quests that your followers give you that range from simple fetch quests to feeding them actual faeces. Cult of the Lamb is a really deep game, but one that never feels overwhelming or too complex.

It’s also worth mentioning how gorgeous it looks. The art style is vibrant and the animal characters are a joy to look at. Having a cult of charming and adorable forest critters makes the horrendous things you do feel a little bit less morbid, although the fantastic animations did make me feel a little guilty when murdering them for stepping out of line.

Cult of the Lamb combines elements of many fantastic and engaging genres, games and franchises to create a compelling experience unlike anything else. The gameplay loop of upgrading your community then switching it up to traipse through a dangerous jungle is sublime, and the way the village provides upgrades for the dungeon crawling and vice versa is just magical. I can’t remember the last time a game held my attention quite so tightly as Cult of the Lamb, so get yourself indoctrinated and give up all your worldly possessions today.

Interacting with your followers one at a time to bless them is tedious.

Cult of the Lamb combines roguelike gameplay with cult management and I simply couldn't put it down.

You may also like
Cult of the LambDevolver Digital

Podcast 497: Ooblets, The Last of Us Part I, Destroy All Humans! 2 – Reprobed