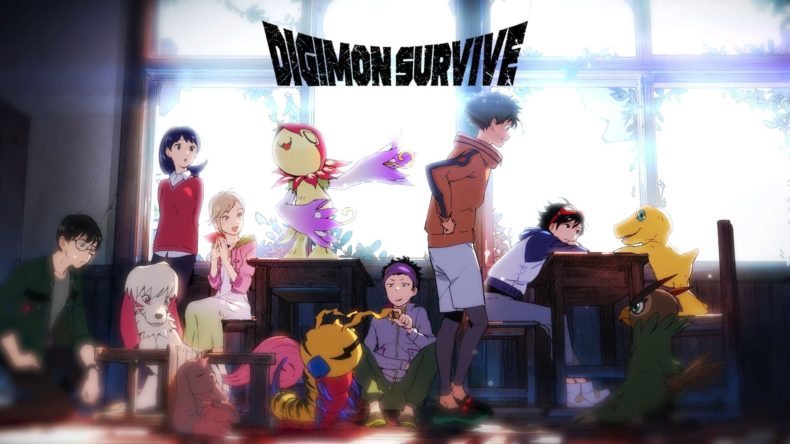 I’ll admit that at a young age I looked at Digimon with disdain. As a child who loved his Pokemon more than almost anything else, this filthy knockoff was just trying to steal the spotlight from my favourite cuties. As a mature and balanced adult though, I’m always happy to play another game where you collect monsters. But Digimon Survive really isn’t like any other monster collecting game.

Our hero Takuma didn’t expect to find himself on a dangerous adventure, but after a school trip leads him and his pals to some ancient ruins they’re transported to another world. This world is full of Digimon (not all of whom are particularly friendly) and our unlikely heroes have no idea how to get home and no adults to take charge.

Digimon Survive is first and foremost a visual novel, so the story is pretty important. The game starts very very slowly, as you meet the different characters and begin to understand the situation they’re in. There’s a lot of almost repeated dialogue as you ask how everyone is doing and what you think you should do next. But eventually it all starts popping off. 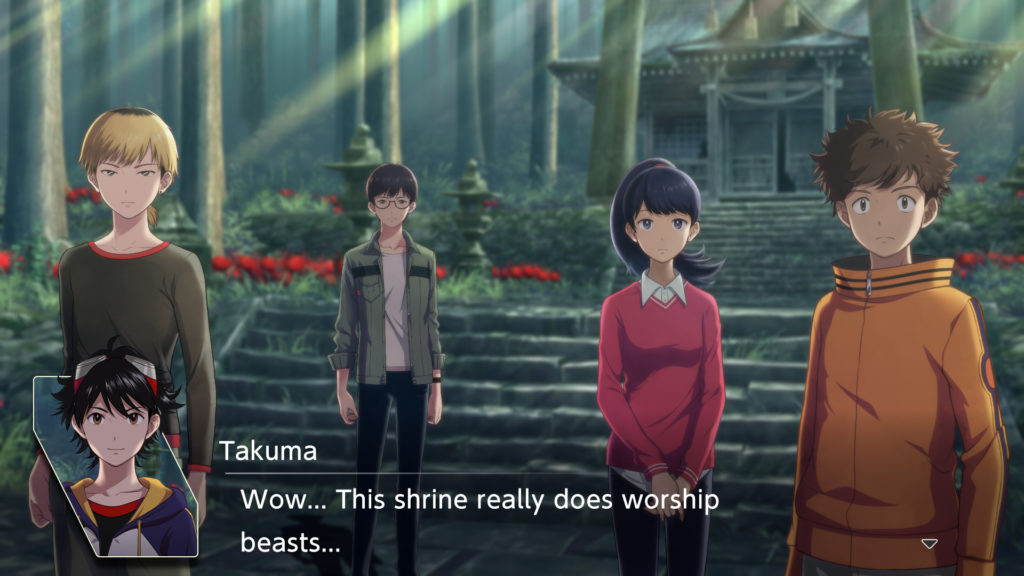 You’d perhaps assume that a Digimon game would be pretty light hearted, and you’d be incredibly wrong. Digimon Survive is a harrowing story of children in peril, and the misery they face trying to survive in a dangerous world. These poor kids lose their composure and end up having mental health crises throughout the story, and it’s honestly one of the darkest tales I’ve experienced in a video game. Ash and Pikachu certainly never had to deal with this.

There are also horror elements in Digimon Survive, which again I wasn’t expecting. One Digimon in particular who is hell bent on sacrificing these unknown children is like something out of a Japanese horror game, and I found her genuinely unsettling. Digimon Survive is, bizarrely, not a game for the faint of heart.

As is standard in visual novels you’ll have choices to make that affect the outcome of the story. These choices can be as simple as what to say next, but sometimes you’ll have to decide how to manage your limited time and who to spend it with. How much each character likes you and the morality of Takuma himself will impact your playthrough in multiple ways, including in the combat. 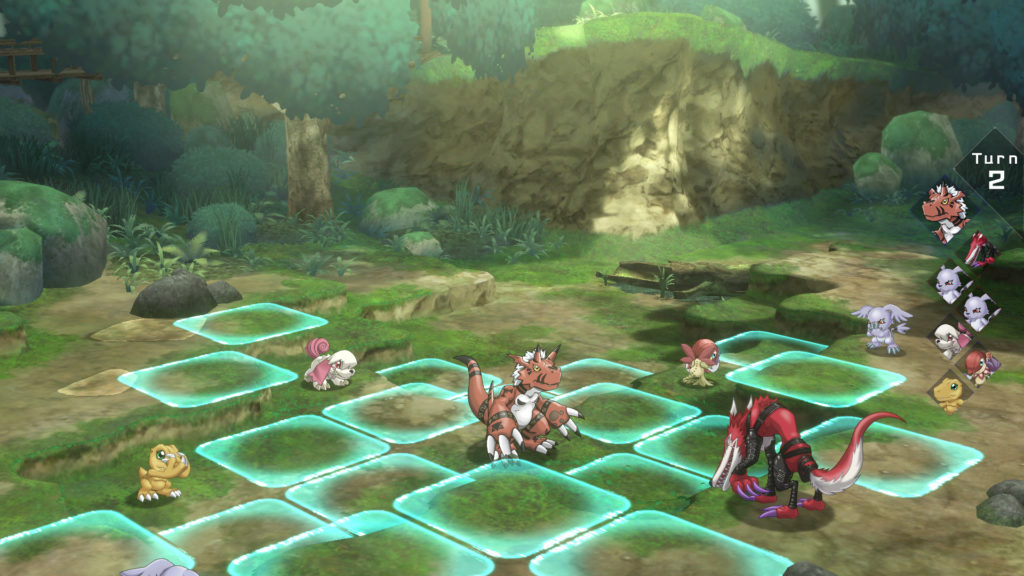 Although you’ll spend most of your time in Digimon Survive reading, there are also tactics battles sprinkled throughout the game. These fights are turn based, taking place on the traditional grid we all know and love. Each turn you’ll move one of your Digimon then unleash an attack if you’re within range of an enemy.

Each Digimon has its own strengths, weaknesses and abilities, as well as the ability to Digivolve into bigger and more intimidating monsters. For a meagre amount of SP you can evolve your monster mid fight, and often their different forms have different elemental attacks you can take advantage of.

There are a few more features to worry about in the combat (like giving each other buffs by cheering each other on) but ultimately the tactical RPG combat is just a bit dull. Moving every monster slowly towards the enemy just feels tedious, and you never really have enough moves to pick from to require a huge amount of thought. It’s a shame because I really wanted to love fighting with different adorable monsters. 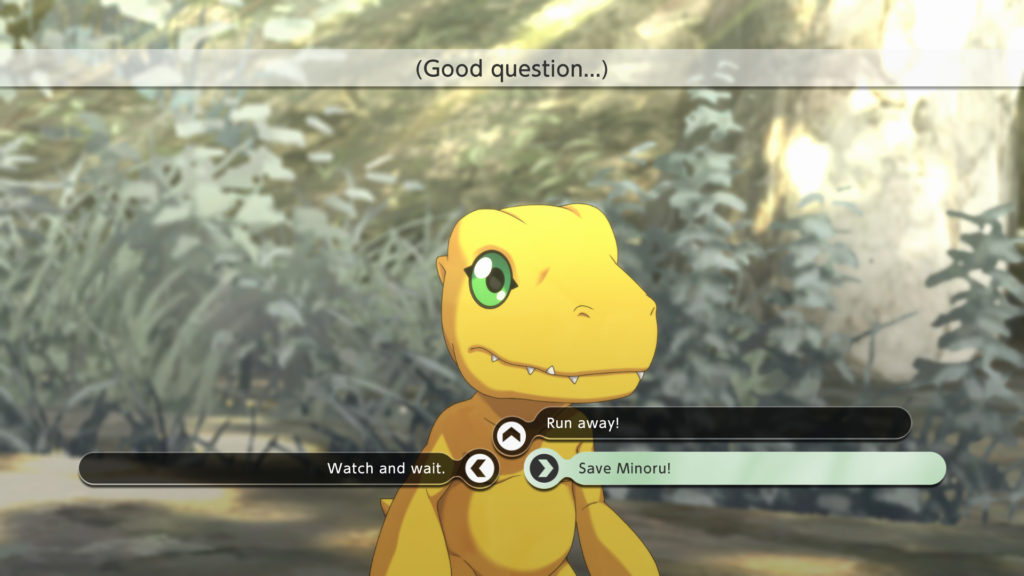 Collecting the adorable monsters is fortunately very compelling. In any Free Battle you choose to partake in, you can recruit the enemy Digimon by talking to them. These conversations feel a lot like recruiting in a Shin Megami Tensei game, and involve trying to choose the right option to please the critter in question. Gentle monsters will just want you to be nice, but aggressive ones might prefer if you match their intensity. If you do well there’s a chance they’ll be added to your collection.

Above all else, perhaps the most impressive part of Digimon Survive is the visuals. I’m not sure I’ve ever played a visual novel that has such high production values, with fully animated characters during conversations of big budget anime quality. The soundtrack is beautiful too, which makes for a great visual and auditory experience during those walls of text.

Engaging dark story
Collecting them all is compelling
Looks incredible

Digimon Survive is an incredibly unique visual novel hybrid, that’s ultimately let down by the combat.