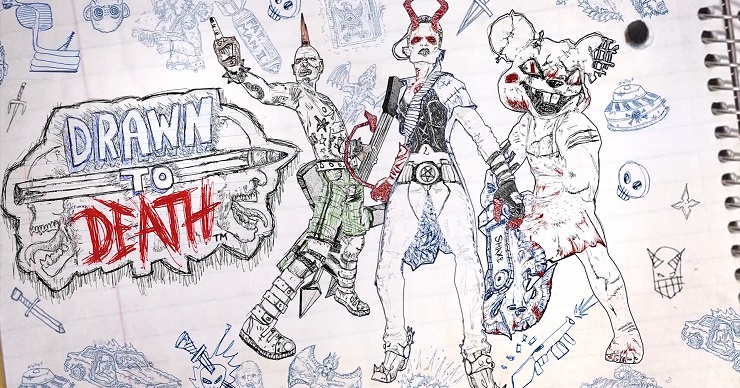 Online shooters are ten a penny nowadays, aren’t they? Can’t move for the sheer number of them, crowding around consoles like kids around a SNES in the Nineties. Speaking of the Nineties, that’s precisely the aesthetic David Jaffe’s new online arena shooter, Drawn To Death, seems to be going for. It also seems to be aiming to recapture the simple shooter style of games from the end of that very same decade, such as the excellent Quake and Unreal Tournament.

What isn’t clear, however, is the precise demographic at which Drawn To Death is aimed. The premise is all based around a teenage boy in class, drawing what can only be described as Heavy Metal-inspired characters, and pitting them against one another in twisted arenas of his own design, all brought to life in his imagination. The visual design feels very Nineties, but the humour is so puerile that there’s no way it can be aimed at anyone who might relate to being a teenager back then. Its overuse of obscenities and incredibly unsubtle insults just doesn’t add anything to the experience, except an overabundance of eye-rolling on the part of the player. The visual design is at least interesting, with its biro sketch style that gives everything a hand drawn look (hence the “Drawn” in Drawn To Death, of course). Even the arenas look like they’re sketched on lined paper, which makes sense when the entire thing is created in the school books of the game’s creator, while bored in class. This leads to a curious amount of lore in a game that’s otherwise as one-dimensional as can be, which is told via an area of the Shooting Gallery in the training section. The Frog, a partially dissected amphibian from The Kid’s imagination, talks of an evolving set of characters and weapons, all created to fight a never ending battle – purely for the amusement of “The Hand”. The Hand can even be seen during matches, but we’ll come back to that later. Story really isn’t necessary here, but it does at least add a little extra to the game.

The gameplay itself is a real throwback to the games that obviously inspired it. Arenas are small and multi-tiered, with weapons and other collectible bonuses strewn about the maps, and there’s a real emphasis on pure shooting, which is incredibly pacey in itself. Battles are restricted to just four players, which keeps things moving and ensures that maps aren’t overpopulated, although a couple of extra players would certainly be appreciated sometimes. That said, matches usually have a ten minute limit, on top of the score limit that is imposed for each game type, so they don’t last too long. It’s a real quick fire game. Game modes are simple enough, with deathmatches and team deathmatches being the main draw, but Core Deathmatch changes it up a little, with deaths actually removing points from your (or your team’s) score. On top of those are one-on-one duels, which need no introduction, and Organ Donor, in which enemies drop their hearts when killed. Collecting and dropping those hearts in set zones yield all important points for your total. In this mode, moving zones offer more points per heart, but aren’t instant like the static points zone, making it a real risk/reward scenario. If you’re a real bastard (or just a bit of a chancer) you can even grab the hearts of those killed by someone else, to grab yourself a cheeky point or two!

There are only a handful of maps available in Drawn To Death, but each is quite varied so it’ll take a few matches before you get a bit tired of seeing any of them. Before each match, players place their vote for which map they’d like to see, and the winner is chosen at random, which means that it’s a crapshoot though. It’s probably the best way to do it, but half the time my matches would only take place on the same three maps, but it did mean that I began to learn those maps a little more easily. My favourite map is unfortunately the one I’ve seen the least, as it only seems to come up around ten percent of the time, but it has moving walls that give it a slight unpredictability, forcing players to think and adapt quickly. When you do die (and you will eventually, no matter how good you are), the respawns are near instant. But you don’t just reappear somewhere random, you’re literally dropped onto the map from high up, and can aim your drop on the way down, even landing on other players to cause damage. Be careful though, as missing that drop will leave you vulnerable for a moment.

Special moves are a big part of Drawn To Death, but they really feel out of place in a game that’s trying to recapture the feel of classic arena shooters, notable for their lack of special moves. Each of the six characters have their own specials, available to use quite regularly, surprisingly. In the right hands, they can be deadly, but those hands have likely spent some time working out what each move does – because the game sure doesn’t bother telling you. There are some balancing issues that desperately need addressing in these early days too, as Diabla Tijuana is particularly overpowered at the moment. She can take down players in seconds. On top of those standard specials is The Hand, a once-per-match move for each character, that sees a giant hand taking over attacking duties in one of, ahem, a handful of ways (sorry). These attacks can be devastating, but its targeting reticle is visible to every player, meaning it can be easily avoided in most situations. Get a bit of luck, however, or time it right, and you can get back in the game quickly or use it to finish off the match in style. Although the special moves can be nice, an arena shooter lives and dies by its guns, and Drawn To Death has plenty of those. They’re not your typical shotguns and assault rifles (there are a couple of those, though), instead they’re crazy designs that mimic the likes of MDK and Armed & Dangerous. But to be honest, the best ones tend to be the various forms of explosive weapons and shotguns, and you can only hold two at a time, so making the right choice is critical to your success – or your inevitable failure. Half the fun is in experimenting, and the more you play, the more weapons you’ll unlock.

Therein lies one of Drawn To Death’s biggest failures, however: its lack of content. With only six characters to choose from (and none of those really feel that different), locking around 75% of the game’s weapons behind a pointless levelling system isn’t really a good idea. With its current roster of weak characters and only a handful of maps, despite their quality, this is a game that will only last you a week or so, before it grows tiresome. You’ll certainly grow bored of the announcer, his forced humour really appealing to the lowest common denominator, and his repetitive phrases just make it worse.

One of its other biggest failures lies in its humour and the immature design of the overall game. It’s a game thought up by a man in his forties, made seemingly for people with the mental age of about thirteen – but only really applicable to thirteen year olds in the Nineties. So…who is this game aimed at? It’s a real shame, because the actual visual style is interesting, but the puerile design surrounding it all just distracts from that unique aesthetic. Twenty years ago, this might have been funny or relevant, but in 2017 it’s already incredibly dated.

To its credit, it does a great job of recreating that Nineties dial-up internet experience. Seriously, the lag and general instability is pretty rough in Drawn To Death, and it can completely ruin an otherwise half-decent deathmatch game. Lag plagues matches, with enemy health being reduced to zero, but they don’t die, and this happens far too often. Servers do at least find games quickly (while the game has a good population, at least) but it’s anybody’s guess whether you’ll actually get into that game or not. On no less than three occasions in one sitting, I was booted back to the PS4 dashboard while waiting for the other players to connect. Not just booted from the server, the entire GAME crashed. Server issues are expected during the launch phase of an online-only game, but the instability of Drawn To Death’s actual game code is not expected. It’s unacceptable, frankly.

With its immature design and humour, Drawn To Death is a game out of time. Its server issues and general instability compound that, distracting from what could have been a fun arena shooter.