If you’ve ever felt the guilt of letting someone down after they’ve just expressed their love for you, you’ll be somewhere close to understanding how I feel reviewing Eastward from PixPil. I feel like this game has done everything possible to make me love it, from an incredible soundtrack, beautiful pixel art animation, a compelling story, and a wonderful central relationship that weathers everything this post-apocalyptic world throws at it. “So then why don’t you love it?” I hear you ask. The simple answer is: “I’ve no idea.”

The more complex answer is: I don’t think it was made for me. And that’s not because of the lack of violence, bombast, and badass redheads, either. It’s more down to the fact that Eastward naturally pulls at a certain set of nostalgia strings that I don’t possess. While it’s a very good game by its own merit, Eastward is built for those gamers who remember playing through Earthbound for the first time, or grew up squinting at a Game Boy screen to play The Legend of Zelda. 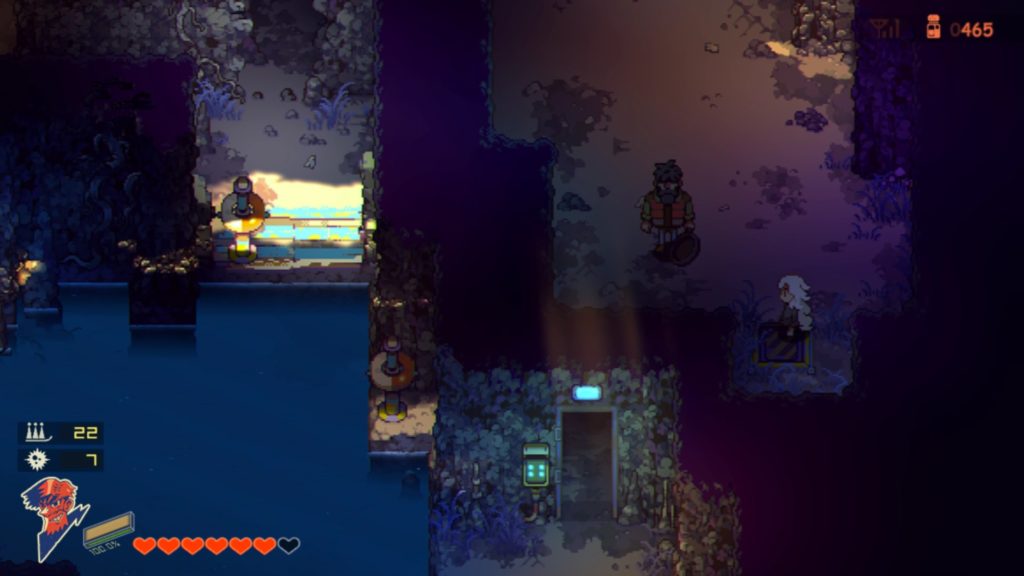 Set in a world ravaged by a mysterious calamity called the Miasma, Eastward begins in an underground community where your dual protagonists, John and his adopted daughter Sam, spend their time among other survivors. John is a hunter, miner, and general handy guy to have around (think Joel from The Last of Us with a less prominent mean streak). Sam, on the other hand, was found by John and claims to have seen the Surface. She’s also haunted by a creepy, ghostly doppelganger – but that does nothing to mute her cheery disposition. For a game that features no spoken dialogue and one protagonist who says absolutely nothing, the story and writing are captivating.

The relationship between John and Sam is just lovely, as they care for each other, carry each other (literally, when Sam climbs up on his shoulders), and genuinely need each other. Other characters that drift in and out of the story such as the world’s only remaining entertainer, Jasper, and the enigmatic badass, Izzy, add fuel to the story’s flickering flame. Each time you begin to feel comfortable or think you can guess where it’s going, something happens to move the pieces around. 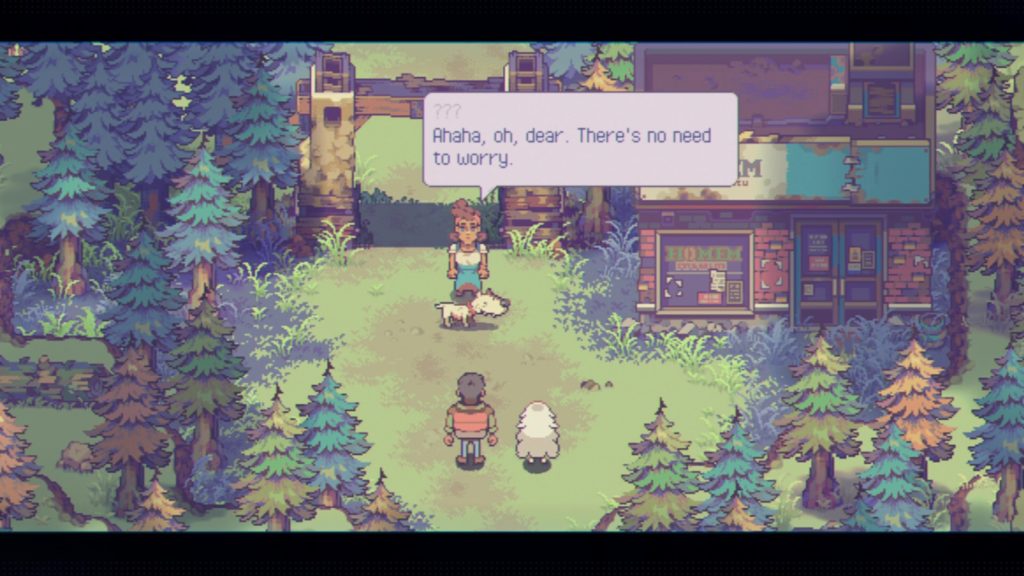 Aboard the mystery train

Banished from their home town and sent forever eastwards on a train known as Charon, John and Sam must work together and with the people they meet along the way to unravel the secrets of Sam’s past and the shadowy powers behind the Miasma. While John fights handily with weapons like his trusty frying pan and a “bang bang” gun, or can drop bombs to clear the way, Sam’s arsenal is more internal; she can use energy to stun enemies and clear pathways through overgrown vegetation.

You can switch between them at any time, and will often need to use both of them to solve environmental puzzles and find your way through areas fraught with danger. John is a decent cook, so gathering ingredients will allow you to whip up meals with his frying pan to heal and increase your health. The cooking animation and sound effects are very similar to those in Legend of Zelda, and the food acts in very much the same way, too.

Fans of Earthbound will get a particular kick from Eastward’s game-within-a-game, “Earth Born”, which features combat similar to the classic RPG. It’s an option activity you can undertake in certain areas, which comes with its own bestiary and collectibles to give you an incentive to play. Besides this, minigames abound as you help out the denizens of various settlements on your way across the land. From collecting “sandrupes” at a local ranch to herding “blimpigs”, there’s plenty to do to keep you busy, even if some of it feels a little like filler to pad out an otherwise fairly linear adventure. 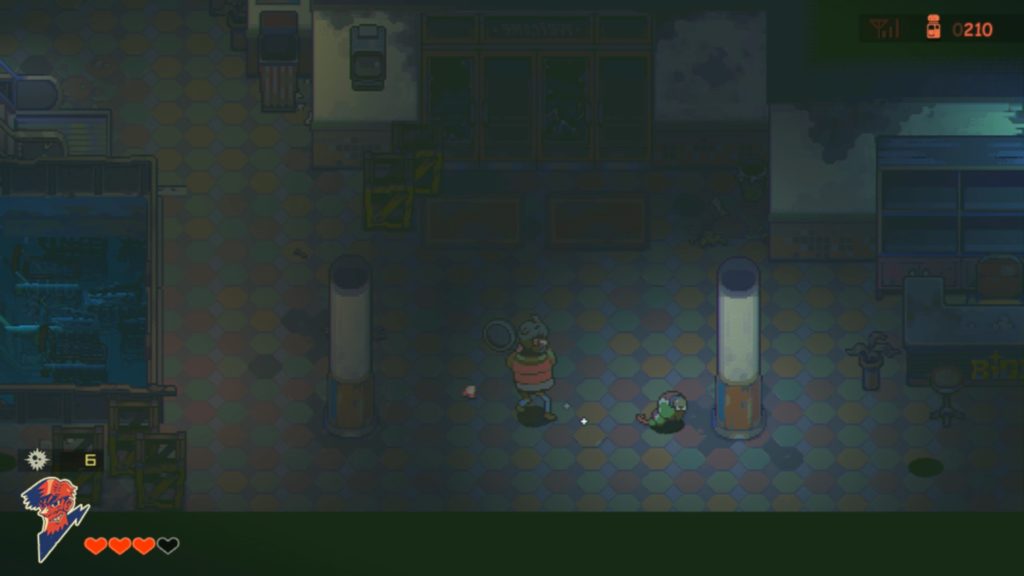 Boss fights break up the exploration nicely, adding a welcome element of challenge. Although, they won’t tax you much more than the puzzles do, and a bit of perseverance will see you through. There’s a nice sense of accomplishment for each puzzle you best and boss you defeat – though the former feel a more natural fit for the world. I found the bosses kind of just appeared and at no point would I have expected them. That’s not a bad thing, of course, and it keeps you on your toes, but some feel almost arbitrary.

Eastward looks gorgeous in places, with some great detail in the pixel art. The world is diverse, split between dark, foreboding caverns and sun-dappled forest, and each new area you visit feels different and interesting. Exploration is fairly minimal, and you won’t wander off the path far except to look for hidden keys and the odd collectible. 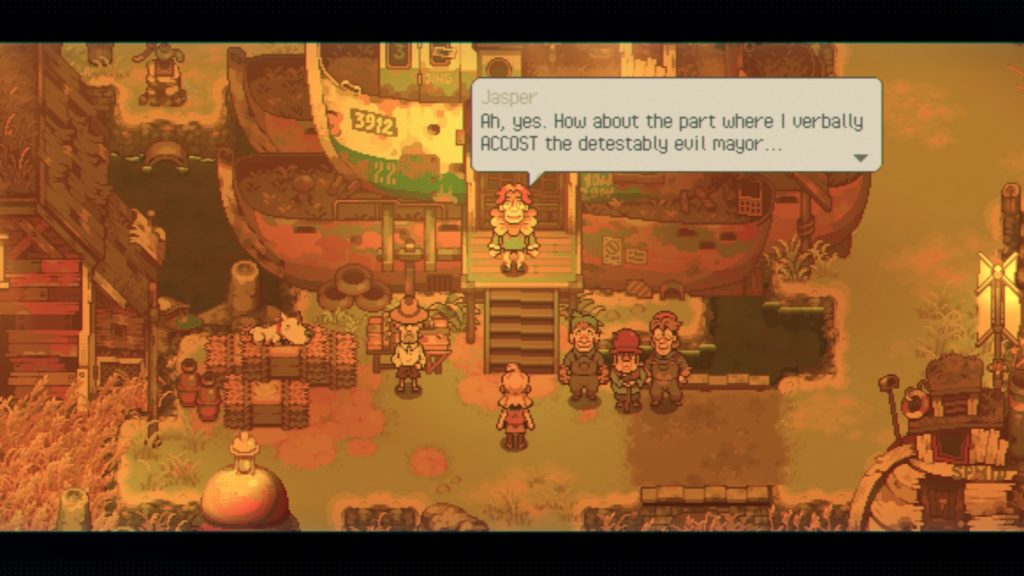 The story does a great job of hooking you and reeling you in. The writing is decent, the characters likeable and the central premise intriguing enough to compel you onwards. But I couldn’t shake the feeling while playing that I’d have gotten more out of it if I was a fan of the games to which it pays such reverent homage. The soundtrack, too, is another major plus point, harking back to the halcyon days of the 90s and, once again, plucking at those particular feelings.

Regardless, though, Eastward is an enjoyable and arresting adventure throughout, with memorable characters, likeable humour and just enough of a central mystery to keep you engaged. Whether you’re a fan of older RPG classics or not, there’s a lot to love about Eastward, and enough here to warrant your attention.

Slow paced
Boss fights are out of the blue

Eastward is an enjoyable and arresting adventure, with memorable characters, likeable humour and a central mystery that keeps you engaged throughout.

The Eastward Switch physical edition is coming on May 24.