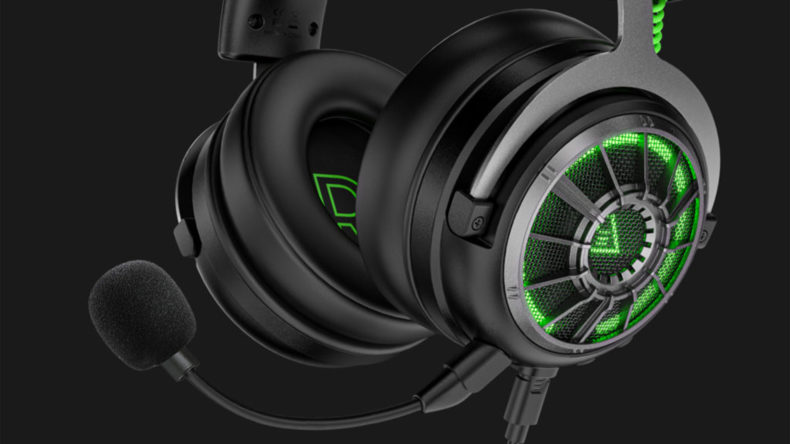 If I’m guilty of one thing with my gaming habits, it’s underestimating the value of good hardware. Whether it’s a new controller when my current one has drift or some extra storage space so I have enough room for my favourite games, I really struggle to put money aside for anything that isn’t an actual game. I might have learned my lesson now though, after spending some time with the EKSA Star Engine E5000 Pro gaming headset.

The EKSA Star Engine E5000 advertises itself as having a load of helpful features for gaming. There’s the ability to switch between 7.1 Surround Sound and 3D Stereo Sound, there’s the microphone with AI Powered noise cancelling and some clever ergonomic design for comfort during those long gaming sessions. Not bad for the mid price tier headset.

Upon opening the jiffy bag the headphones shipped in I was greeted by some seriously premium packaging. The purple and green aestetic is lovely, and with the Konami code written down the side I knew this headset was for super nerds like me. Inside the box the headset was lovingly placed in a silk drawstring bag, and individual boxes housed the microphone and a whole host of wires to connect to all your favourite devices. 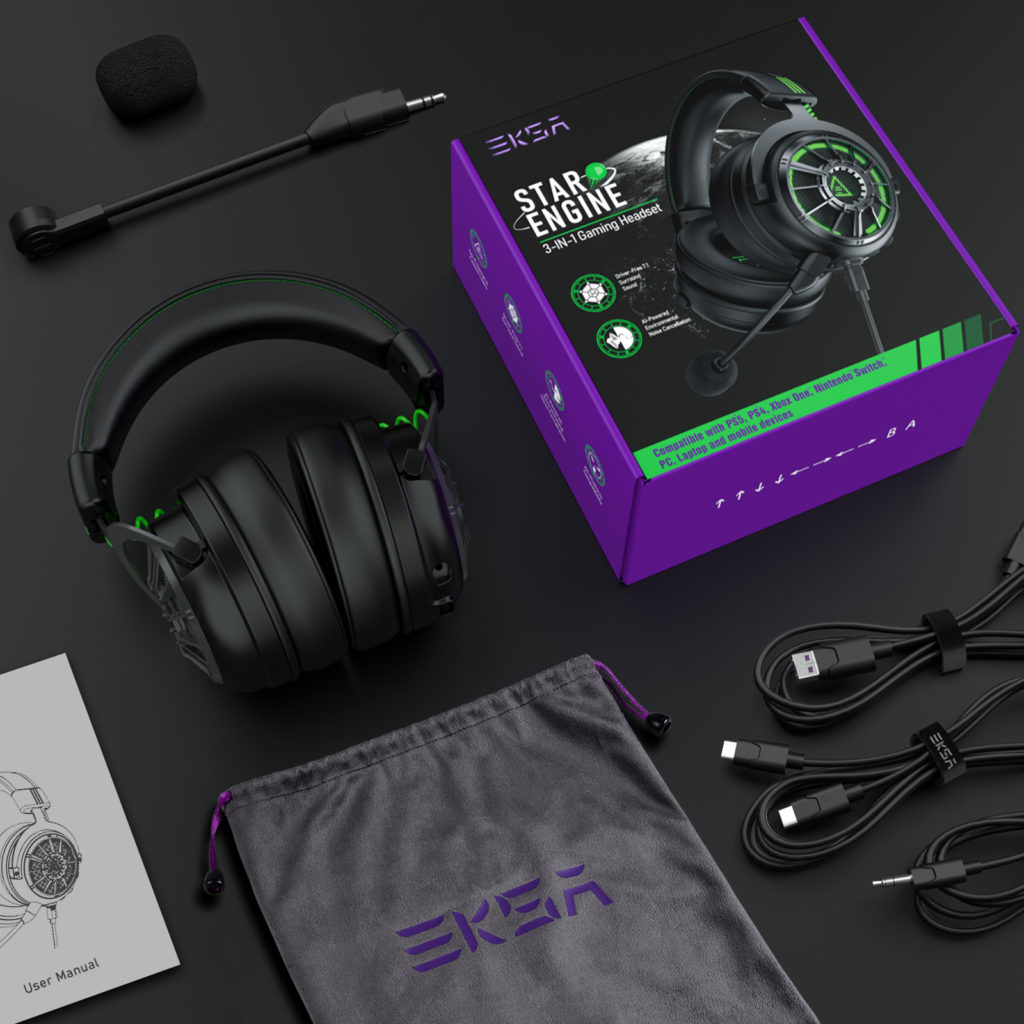 The EKSA Star Engine E5000 headset itself is very aesthetically pleasing. If big ass headphones are your thing, you’ll love this beefy bit of kit. The perfect flourish for this sleek headset is the tiny coil of neon green wire, which is just very charming. If you’d prefer something more flashy, it also has green lights you can turn on for any raves you might be attending.

I was instantly impressed by the sound quality of the Star Engine E5000. We’re in an age where (especially when playing games online) listening out for your enemies is key, so for the most part I used the 7.1 Surround Sound option when wearing the headset. Being able to switch to 3D Stereo Sound at the push of a button is a great function, and if you plan on using this headset for all your music and Netflix needs then you’ll appreciate how easy it is to swap between the two. If you want to meddle with the settings beyond switching between these two presets, there’s also a driver you can download and fiddle with the levels to your hearts’ content.

The other thing that’s essential when playing with your buds online is a decent mic. There’s nothing worse than dealing with an echo or background noise in a tense situation, and thanks to AI powered noise cancelling you’ll never be the one causing that. On testing I found that any noise from the TV, fans or even other people in the background was inaudible when talking through the mic, and it was even good enough quality to use for a few Dead by Daylight and Cuphead streams. Especially for a casual console stream, the EKSA Star Engine E5000 headset is a great option. You can check out my full Cuphead: The Delicious Last Course playthrough here to check out the sound quality yourself. 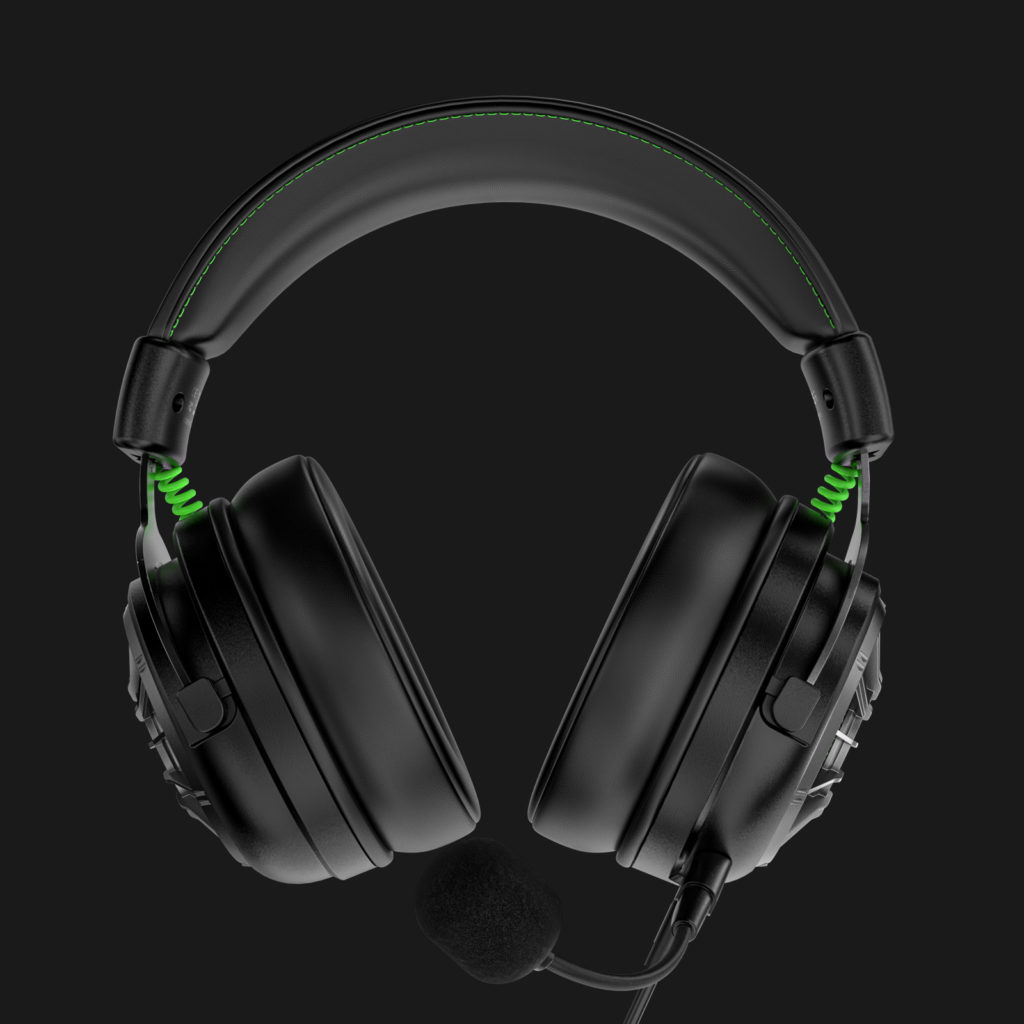 The Star Engine E5000 is a real jack of all trades of a headset, and so you can use it absolutely everywhere it comes with a 3.5mm cable, a USB C cable and a USB A cable. It’s nice to know that you won’t need to buy in anything else because of a stingy selection. Obviously all these wires are here because the E5000 is a wired headset, which is great for gaming due to the lack of latency. Just don’t expect the freedom of no wires.

EKSA put a lot of emphasis on the comfort of the E5000, and for good reason. With oversized earcups your ears won’t feel the squish when wearing this headset, and the memory foam earmuffs are really comfortable. The only issue I had was a seasonal one. It’s summer, and the sheer size and padding of the E5000 left me overheated. Especially when dealing with a particularly tense multiplayer game, you’ll be left a sweaty mess.

Other than my poor sweaty ears, the only real issue I had with the EKSA Star Engine E5000 was with the buttons on the ear. No matter how long I used this headset, I always found it difficult to locate the line of switches and volume dial, and forgot which button did what. It’s a really small complaint and is a very personal issue, but it definitely annoyed me a tad.

The EKSA Star Engine E5000 Pro gaming headset is a wonderful addition to any gaming setup, with plenty of features at a reasonable price. Whether you’re using it to climb the ladder with your squad or stream some Deadly Premonition for the crew, it’s a great jack of all trades option that won’t break the bank.