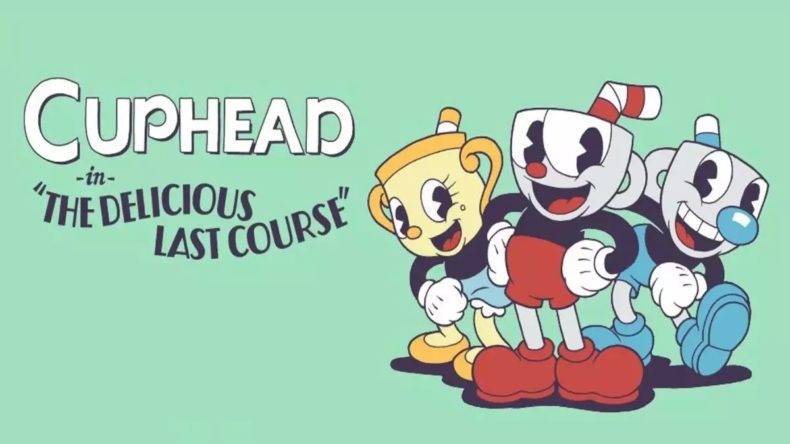 Cuphead: The Delicious Last Course is an absolute treat, and I get the feeling Studio MDHR knows this thanks to the cheeky title that’s an acronym for DLC. There’s been a lot of talk around how it could have been an entire game of its own, and after five years of development, it has big boots to fill. Luckily, then, it’s absolutely magnificent.

For starters, you’re getting to play as Ms. Chalice, who (significantly) is not a simple skin swap for Cuphead or Mugman. No, Ms Chalice has her own unique moveset. She has a more shallow jump, so instead is armed with a double jump to ensure she can get higher than the lads. She also has a parry dash, and an invulnerability roll. But playing as Ms Chalice comes at a slight cost, because while she may have some moves that may make some people consider her easier to master (oh and spoiler: she isn’t), you have to equip an item in your charm slot to allow you to play as her at all.

It’s clever, really. Studio MDHR has thought of everything for this Cuphead DLC. Unlocked after completing the Mausoleum on Isle 1, a boat spirits you away to the new fourth island, with a story slowly unfurling that reveals a solution to get Ms Chalice back to life. A chef on this island can bake the goodies to give the trio power over the spirit world, but for now, he can only make cookies to have it happen temporarily: hence the cookie charm to allow you to play as Ms Chalice at all. So instead of collecting souls for the devil, you’re collecting ingredients for the chef. 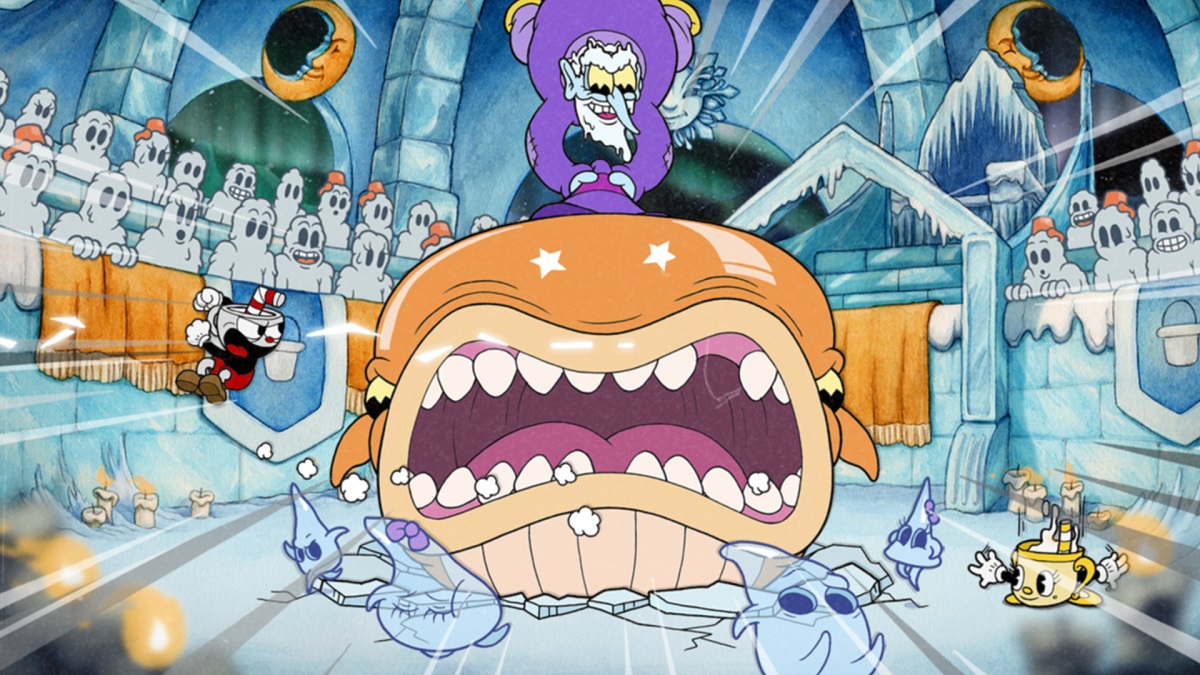 And it’s commendable that this story even exists. For many, I’m sure just new bosses and a playable character would have been enough, but there’s so much more here, including new items in the shop, and a new way to earn coins to buy items. You see, there’s no run and gun levels in Cuphead: The Delicious Last Course. Instead, there’s some King that will drop down a ladder from the sky allowing you to ascend and take on his parry-based challenges.

In these levels, akin to a major side-quest, I guess, you cannot shoot or use special moves: you just parry. The first is pretty simple, teaching you the ropes. You have to parry lights and avoid getting hit. It’s clearly designed to teach you that Ms Chalice is ideal for this kind of thing. But as you progress through the challenges, they become more fiendish and tricksy. But whatever madcap reason Studio MDHR has come up with for forcing you to parry to defeat a foe, the deftness of touch is matched only by how incredible the art, animation, and sound design is. 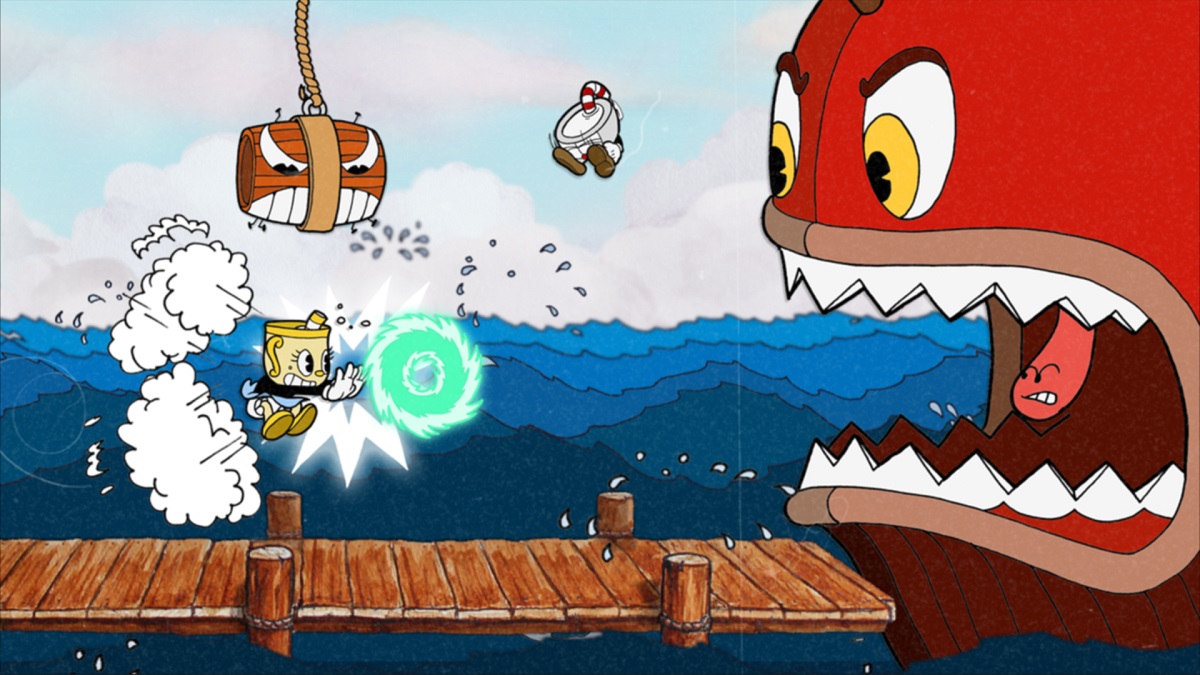 From the clip-clopping of a clumsy looking horse, to an ant-eater sticking his nose off-screen and returning with a massive tongue that is both damaging to you, and something you can parry and attack, it’s just magnificent. The game oozes charm and vibrancy, and it’s as though the entire world is dancing along with the music. Cuphead: The Delicious Course, like the original 2017 release, may not be everyone’s cup of tea, but it’s far and away one of the most gorgeous looking and sounding games you’ll have the pleasure of playing.

But what of the new bosses? Well, let’s put it this way, on the new map there’s a chap who will happily tell you that the area he’s in front of is for good players, so you should come back when you’ve proven yourself. After beating the first boss (Moonshine Mob in Bootlegger Boogie), you can take on the first plane level (Esther Winchester), which considering Bootlegger Boogie is tough, is a monumental step-up in difficulty. Usually I like to replay them until I get a rating I’m satisfied with, but with Moonshine Mob I was happy to get a C and move on at first.

Once you’ve proven yourself you can take on Glumstone the Giant (Gnome Way Out), and he’s even harder than Moonshine Mob, obviously. You can imagine the swearing that went on. But crucially, none of them feel “unfair”, they just feel as though you need to learn patterns, and obviously execute movement and shooting. The sheer ingenuity of the designs really is on another level, and while there are tough bosses in the main Cuphead experience, some of the bullet-hell offerings in The Delicious Last Course are going to test the very best. 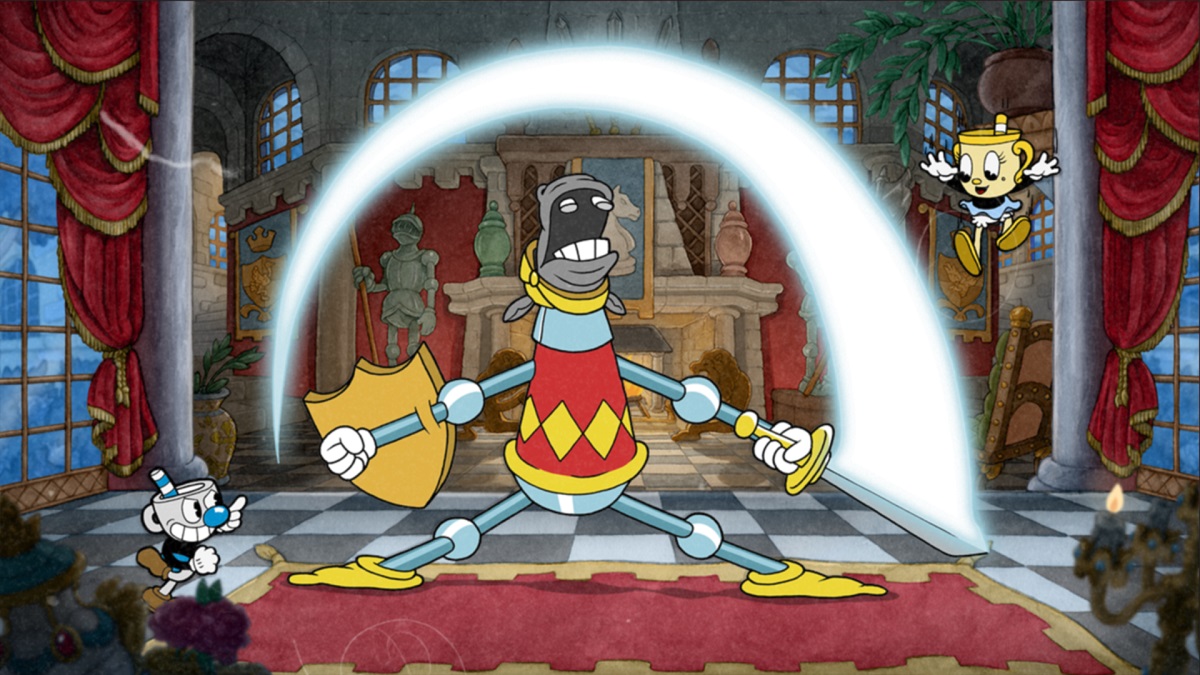 But that’s what you’d want, really, isn’t it? The very best pieces of add-on content also give you reason to revisit the rest of the game, and Ms Chalice and her unique moveset does exactly this. Truthfully, after over a week with Cuphead: The Delicious Last Course, I’m still not sure if I prefer playing as Cuphead & Mugman, or as Ms Chalice. It’s like adding a new favourite character to a fighting game, but your history and muscle memory wants to pull you back to Ryu or Ken’s friendly hadouken.

Truthfully, there’s just nothing at all to complain about with Cuphead: The Delicious Last Course. No, it’s not an entirely new game, and the better players will probably blitz it, but the only negative I can really come up with is the same things that were aimed at the original game, but the fact I want more of it, yet am worried how long that might take to happen, speaks volumes. In a year of cracking games, Cuphead: The Delicious Last Course is one that shouts to be played loudly enough that it simply cannot be ignored.

In a year of great games, Cuphead: The Delicious Last Course is one that shouts to be played loudly enough that it simply cannot be ignored.