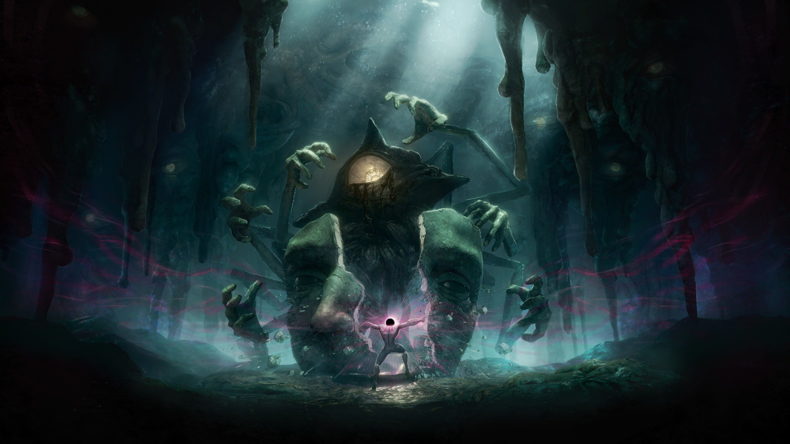 It wasn’t until I was on my third or fourth attempt at the second boss that I realised what Grime wanted me to do. See, I’d been attacking it like any other 2D Metroidvania. Almost sprinting it, smashing my way through most encounters, parrying and attacking without much thought. But that’s not what Grime is. Nor is it what Grime demands. Above all, Grime demands patience.

Thematically, this should have been apparent from the off. The game begins with you dragging your body, newly formed from chunks of sediment, across the ground. You’re head is a singularity, a sentient black hole, and you’ve been birthed into this world with a purpose you won’t understand for some time. The denizens of this strange, disturbing land, believe you some kind of chosen one. Either to be revered or feared. Your proportionate limbs are an anomaly here. Everyone is made of rock, heads too big for their bodies. But you, the “Carven”, are different. 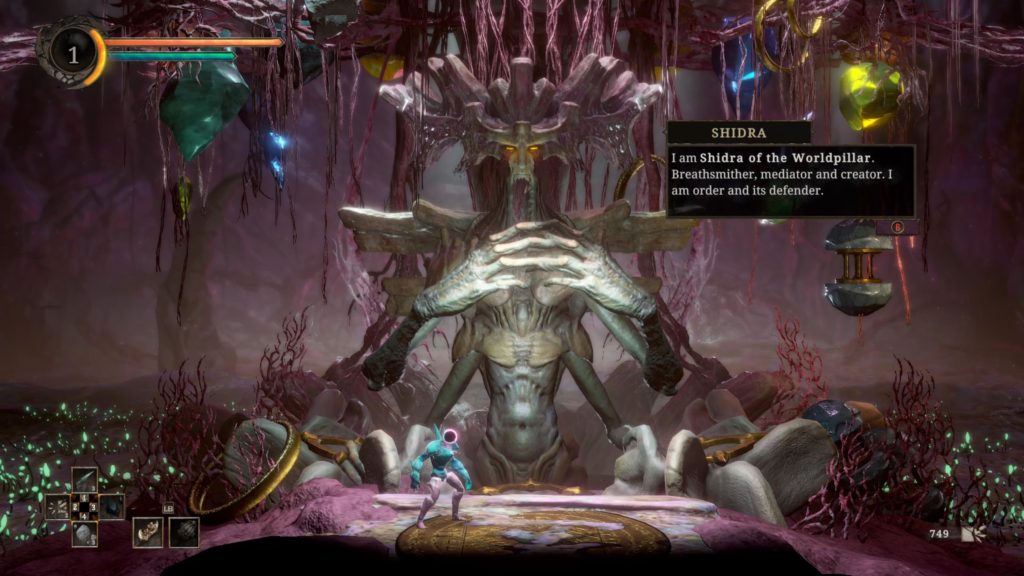 Wielding groteseque weaponry and garbed in armour made of stone, you’re here to hunt down the evils of this world. From lumbering soldiers to beasts that are more mouth than body, you’ll face them all. What makes Grime interesting, though, is the parry mechanic. When you perform a timed counter you do it not with your weapon but with your noggin. The unfortunate attacker – depending on their remaining health – will then be absorbed, dragged into the infinite, crushing singularity that is your head.

Not only does this kill them and convert their “Breath” into healing energy, but it also allows you to learn certain traits. After successfully parrying an enemy so many times, you’ll pick up knowledge. This may allow you to heal on a successful parry, or detect nearby secrets. There’s a decent sized list of traits to unlock, and they’re all useful.

And you’ll need them to navigate Grime’s terrifyingly surreal world. This genre is often a fertile spot for the visual imagination. Dead Cells, Ori and the Blind Forest, Hollow Knight… These are titles that dazzle you with their art style before hooking you with their gameplay. Grime does the same, only with much less overt beauty. Its world is dark and cold, a place of stark stone and barren rock. There is the sense that the gods of this place are dead or gone, and hope has long since been replaced by desperation. 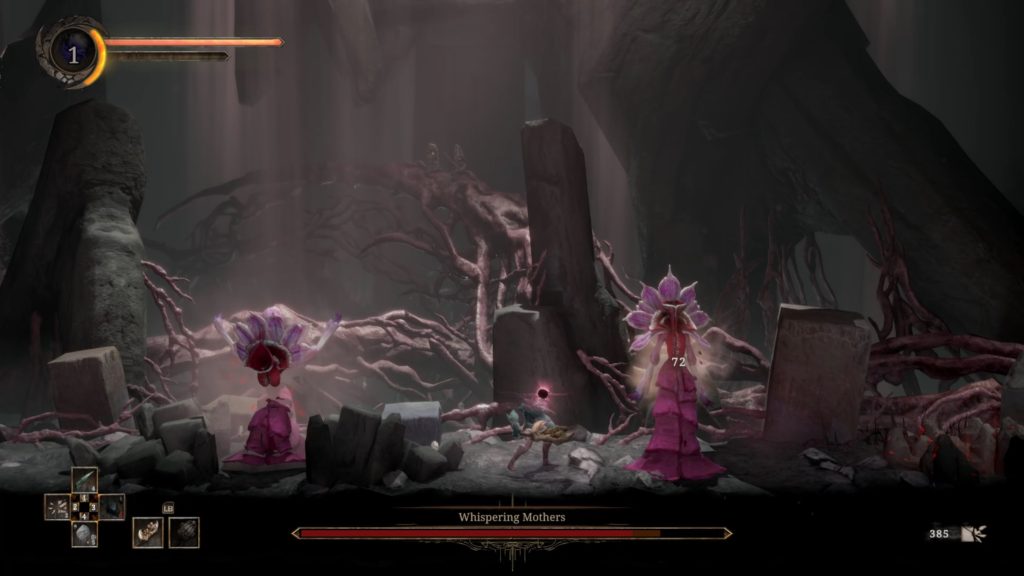 Fingers of bare rock grasp at thin air, body parts cast from sentient stone follow you or snatch at you as you pass. It’s a world that’s out to kill you, even though narratively, you are the hunter. As the crags tremble beneath your feet, you’ll move from fight to fight, your enemies marked as prey. They exist to be devoured, consumed – even the bosses.

Grime demands that you take your time and use the powers afforded to you. You can switch between two weapons at any time, from huge blades to burning censers and axes made from fisted hands. Whike the weapons have stats eerily similar to those in Dark Souls, the armour appears to be cosmetic.

Enemies you slay dissolve into Mass, which is used to upgrade your stats. You don’t lose Mass on death, thankfully, but are returned to the last checkpoint. Instead you lose your combo modifier, which increases the amount of Mass that enemies drop. It’s a neat system that still makes you want to reclaim your former “vessel” but doesn’t feel overly punishing. Similarly to Mortal Shell, smashing your previous Vessel will restore your health, giving you a free heal during boss encounters. 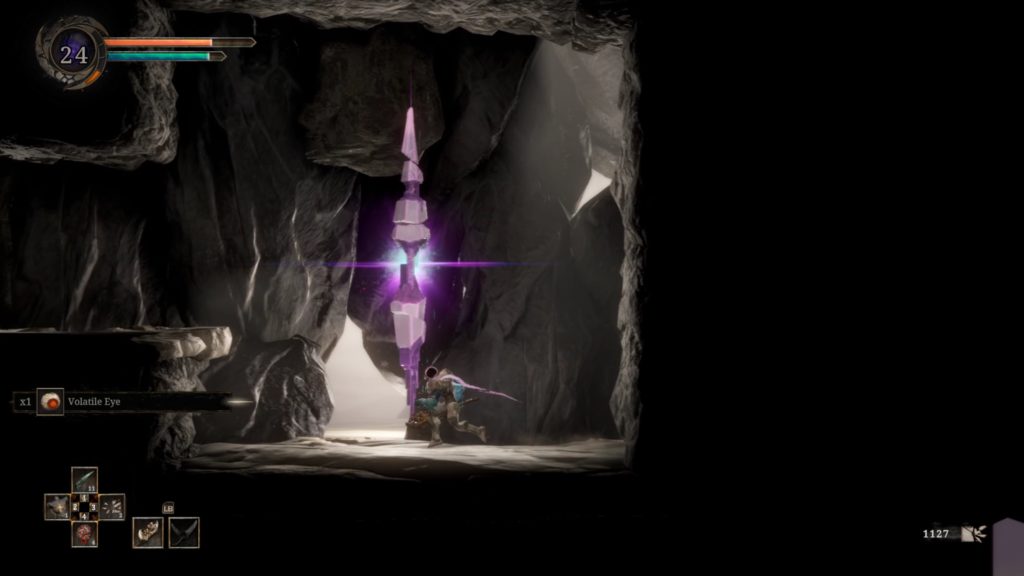 The world of Grime is a bizarre joy to explore. Some areas, such as the first major town, are stunning. It’s a vivid, beautiful spot amidst a sea of grey and brown. It’s also a great showcase for how talented and versatile this art team is. Even coming at this game with a critical eye, I struggle to find many faults with it. Perhaps the only real annoyance is that until you unlock shortcuts, the run back to some of the bosses can be painful. But then, shortcuts do exist to alleviate this.

CHECK THIS OUT: The best (and worst) Alien games so far

I do miss games that tell a coherent story, and Grime is another obscure tale told in fits and starts. But this isn’t a major problem, as exploring the world is so much fun. Seeking out hidden pathways, optional bosses, secret weapons and power-ups… This is the heart of these games and Grime delivers it in spades.

Grime is simply a phenomenal game, and is one of the best hardcore Metroidvanias I’ve played in a while. I’d advise any fan of the genre to seek it out and give it a try, and I promise it won’t disappoint.

Grime is simply a phenomenal game, and is one of the best hardcore Metroidvanias I've played in a while. I'd advise any fan of the genre to seek it out and give it a try, and I promise it won't disappoint.