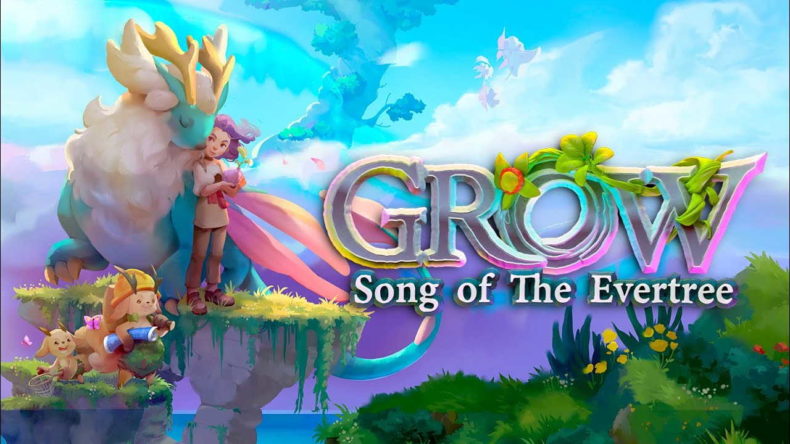 My wife loves a good list. And I guess secretly I do too, but I’d never tell her, for fear of our weekends being spent drawing up our entire future in bullet point form. But I can’t deny there’s something cathartic about being clear on what you intend to do and then doing it. And Grow: Song of the Evertree does this in spades, knowing it’ll keep you hooked for the long term. But the latest outing from Prideful Sloth attempts to take the seemingly mundane and make it enjoyable. And it mostly succeeds, although does have a couple of missteps along the way.

The game begins with you as the last remaining alchemist in Alaria. You’re tasked with helping the titular Evertree with its restoration. A terrible fate has befallen it, and it is now chastened by The Withering – a powerful force that takes the form of huge purple vines that have enveloped the tree and the world around it. You are joined by an anthropomorphic book and cauldron on this new journey. They give you some Alchemist tools of the trade (which are oddly not chemistry equipment but the usual handyman tools). Then you must begin by planting a World Seed in the branches of the Evertree.

Once done, a mini world grows from the seed on the Evertree’s branches. But The Withering is still present and requires cleaning up to truly restore the Evertree. You’ll use your new tools to pull up weeds, plant new seeds and water them, smash rocks or scythe down large plants to clean up the current mess. In that sense, it’s very reminiscent of the upkeep you’d encounter in Animal Crossing: New Horizons or Stardew Valley. The need to keep things neat and tidy is innate in those of us who enjoy those games, so this feels almost natural. And as you tend to your world it will grow over time, with a larger area to clean up and restore. 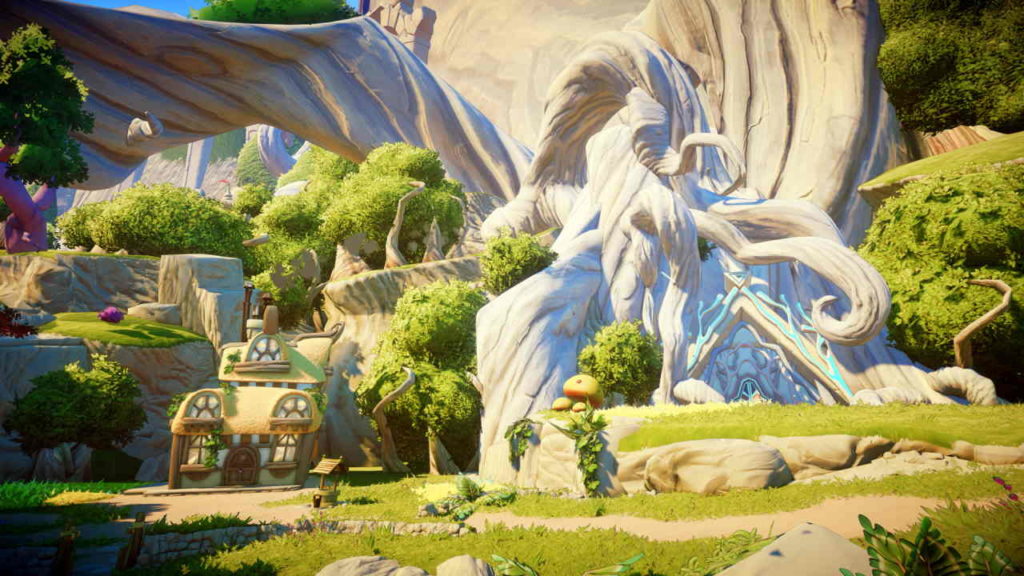 A day and night cycle is then introduced, and so too is another aspect of the game’s world management. As well as tending to things up in the Evertree’s branches, you’ll also need to help grow a thriving community on the ground. As The Withering recedes, more space is unlocked around the tree, and with the help of the native Everkin creatures, you’ll fill that space with buildings and residents. Grow communities well enough and their harmony will reduce The Withering further and unlock new areas of the map to explore and build new communities. Your key task though is to locate a key item in each area, which when combined will free the Evertree from The Withering for good.

So as you can see there’s a lot to take in and do. But that’s where the lists come in. Your friendly book helper will keep a track of all your main tasks, as well as a load of optional side-tasks that you can complete at your leisure. Completing any of these always has a reward, so there’s always a sense of accomplishment and progress. These rewards can range from cosmetic items for you or your visitors, decorations, and wallpapers for customising your town, or one of many Essences that exist in the world of Grow: The Song of the Evertree.

And perhaps the most unique selling point of Grow: The Song of the Evertree is how you use these Essences. Every item in the game (of which there are hundreds) can be broken down (via your Cauldron friend) into several of the game’s 24 Essences. These range from Lush and Abundant, to Warm and Dry, to, um, Sticky. You can then combine up to five different Essences in various quantities to create different, unique World Seeds. Then you can go and plant them in the branches of the Evertree and see what your mind has made.

And the differences are quite stark. After opting for what I thought would be a “good” option of a combination of Lush, Abundant, Tranquil and Comforting and getting a lovely, but ultimately “normal” world, I then started experimenting. Using other combinations, I got dusty, desolate, rocky worlds, an icy landscape, and even a whimsical one where the trees looked like Greek columns in the ground. Perhaps my piece de resistance though was a World dubbed by the game as the Sanctuary of the Syrupy. Here the world was covered in sticky pink goo, and the rocks and cliffs had eyes that moved of their own free will. Yes, really. 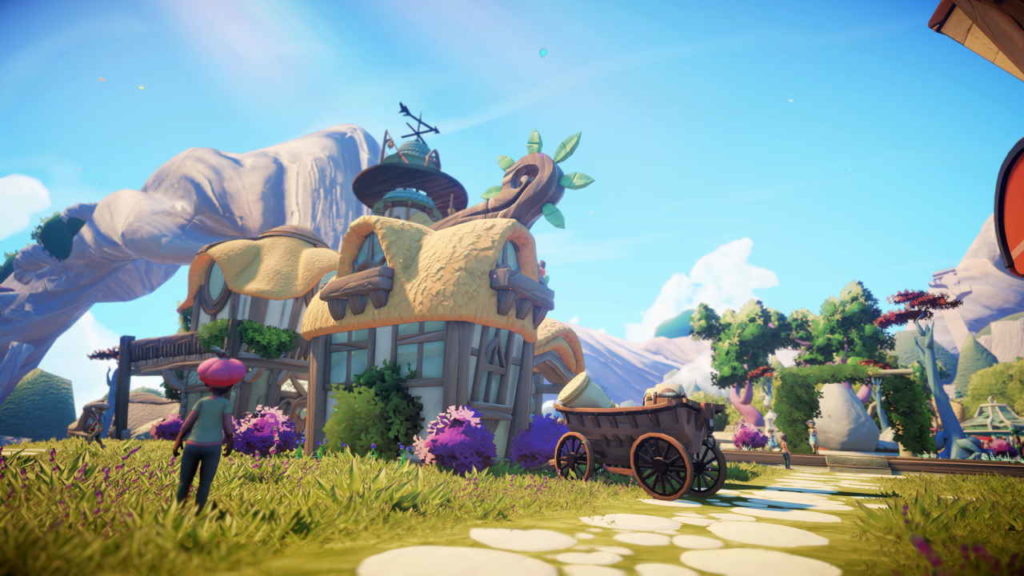 With such disparate parts to the game, and a constricting day and night cycle, it might seem that Grow feels a bit, well bitty. But that’s not really the case as the work you do in the tree Worlds helps your world on the ground. The main currency – Myora – is rewarded for every weed pulled or seed watered up in the Evertree, which helps pay for construction work on the ground. All the items you gather up in the Worlds can make Essences for more worlds or pay for specialist buildings down below to help the harmony of your communities. It works well in tandem so time doesn’t feel wasted.

Well, that is true at the beginning of the game at least. At the start of the game, Myora is in short supply and so you need to be frugal in how you spend it to not halt your growth. But after you’ve expanded into a few communities, the amount of daily Myora you accumulate far outweighs the cost of anything and it becomes a redundant currency. The same is true of certain Essences too, whereas annoyingly others seem much rarer. This restricts some buildings you can construct and obviously what you can use to create worlds, which is a little frustrating.

Lovely to look at

A cursory glance at Grow: Song of the Evertree, and you’d be forgiven for thinking you were back playing Yonder: The Cloud Catcher Chronicles, also by Prideful Sloth. It’s bright, colourful, and endearing thanks to its colour palette and almost soothing tunes as you go about your work. The style is in perfect keeping with the story and what you’re trying to achieve. 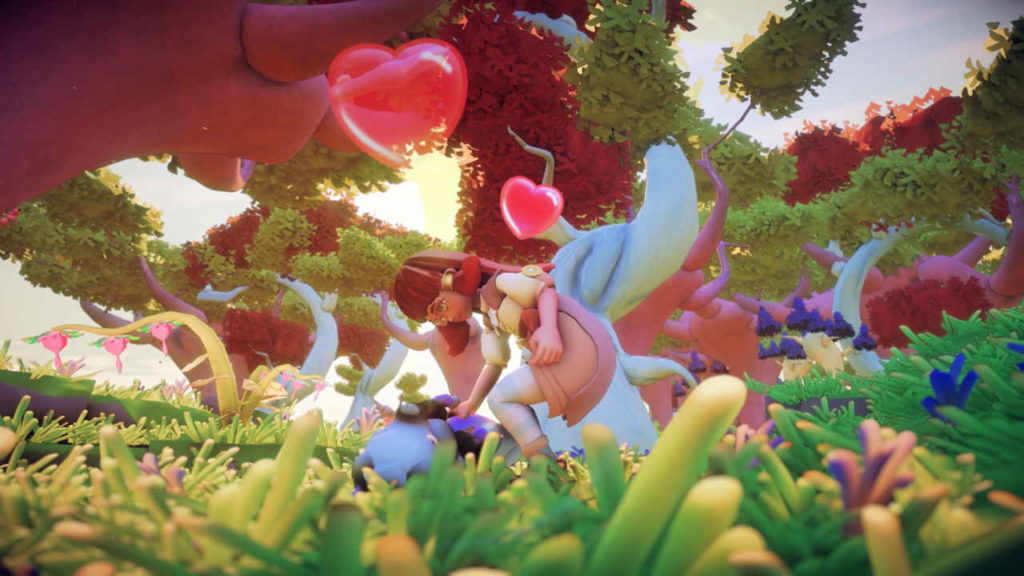 There are also some additional flourishes to the game which I found enjoyable. There are some dungeons to explore, that whilst not having combat, do have basic platforming and puzzle-solving. They’re not really challenging, but this does make them accessible to all, and they’re well designed for what it is. The dungeons were a nice change of pace, requiring focus and attention from what can become sometimes passive maintenance work elsewhere. There are also hidden extras, like secret locations or Alchemist recipes for certain Perfect Worlds that can be found throughout the map for those willing to go off the beaten path.

Ultimately, Grow: Song of the Evertree has a lot to offer the right type of person. If you enjoy the calming maintenance of Stardew Valley or soft-touch community building in Animal Crossing, then this could be for you. If the concept of experimenting with Alchemy to make new, random worlds also appeals, then Grow could command a lot of your time also. It is nice seeing trees you’ve planted come to life, but having no say on the placement of these (as it’s all random) takes the creative edge off somewhat, meaning the worlds never truly feel your own aside from the general aesthetic.

But those who wince at doing that for twenty hours to reach the game’s credits may want to reconsider. Whilst the world and possibilities of Grow, certainly do just that as you play, the variety doesn’t really alter once you’re a few hours in. It would have been nice if additional maintenance options were unlocked later for example, but instead, it’s the same few tasks over and over. It’ll be reassuringly familiar for some, but for others, it could become tiresome over time. It won’t be for everyone, but Grow: Song of the Evertree is a lovely, cathartic world-builder that may just scratch that to-do list itch.

Can feel repetitive
Currency imbalances throughout

Grow: Song of the Evertree is a game full of charm, and will be a relaxing world-builder for some, but a repetitive experience for others.