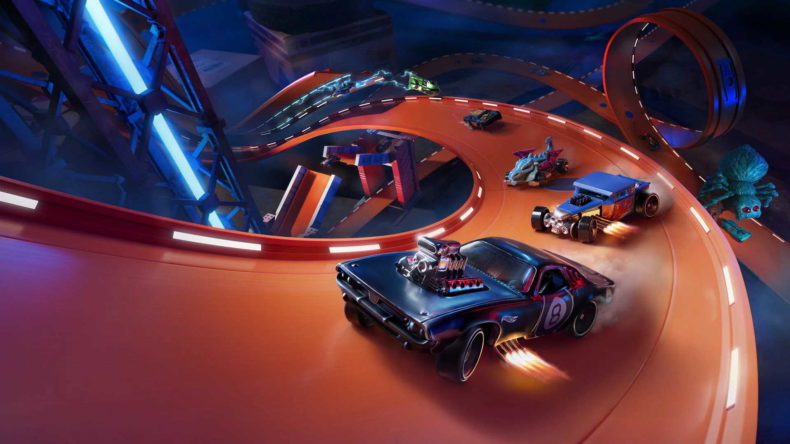 Kids these days don’t seem to play with toys an awful lot, before progressing to more technologically minded pursuits. I get that the world has changed, but I do sometimes wish that my youngest had retained his fascination with toy cars and wrestling figures for a bit longer than he did, as it meant I got to buy them! One of the stalwarts of my childhood were the beautifully designed Hot Wheels vehicles line, and the banging orange and blue tracks.

A quick run through a Smyths the other day confirmed that they are just as great as they always were, perhaps even better. When I saw that MotoGP creators Milestone were planning a racer based upon the franchise, my interest was piqued. Toy cars and games had worked well before – take a bow, Micro Machines – but how about Mattel’s legendary die-cast miniatures? There previous form, Forza DLC aside, has been pretty dreadful. Is that about to change with Hot Wheels Unleashed?

In a nutshell, the answer is a resounding yes. Hot Wheels Unleashed grabs you in an enveloping hug of nostalgia from the moment you first rev your engines on the iconic twisting orange track. The genius thing the Milanese studio have done is to present the Hot Wheels cars not as altered approximations or larger vehicles stylised to resemble the toys. They have presented them as toys, little cars driving around giant real-life environments, with a sense of scale and enormity that recalls the world inhabited by Woody and co in Toy Story. More so than any other game I can recall, the physics here make it feel like you are really taking control of a supercharged version of the cars you chucked around your bedroom, through the lofty Mega Garage, or the gravity defying loops your old man helped you snap together. It’s fantastic. 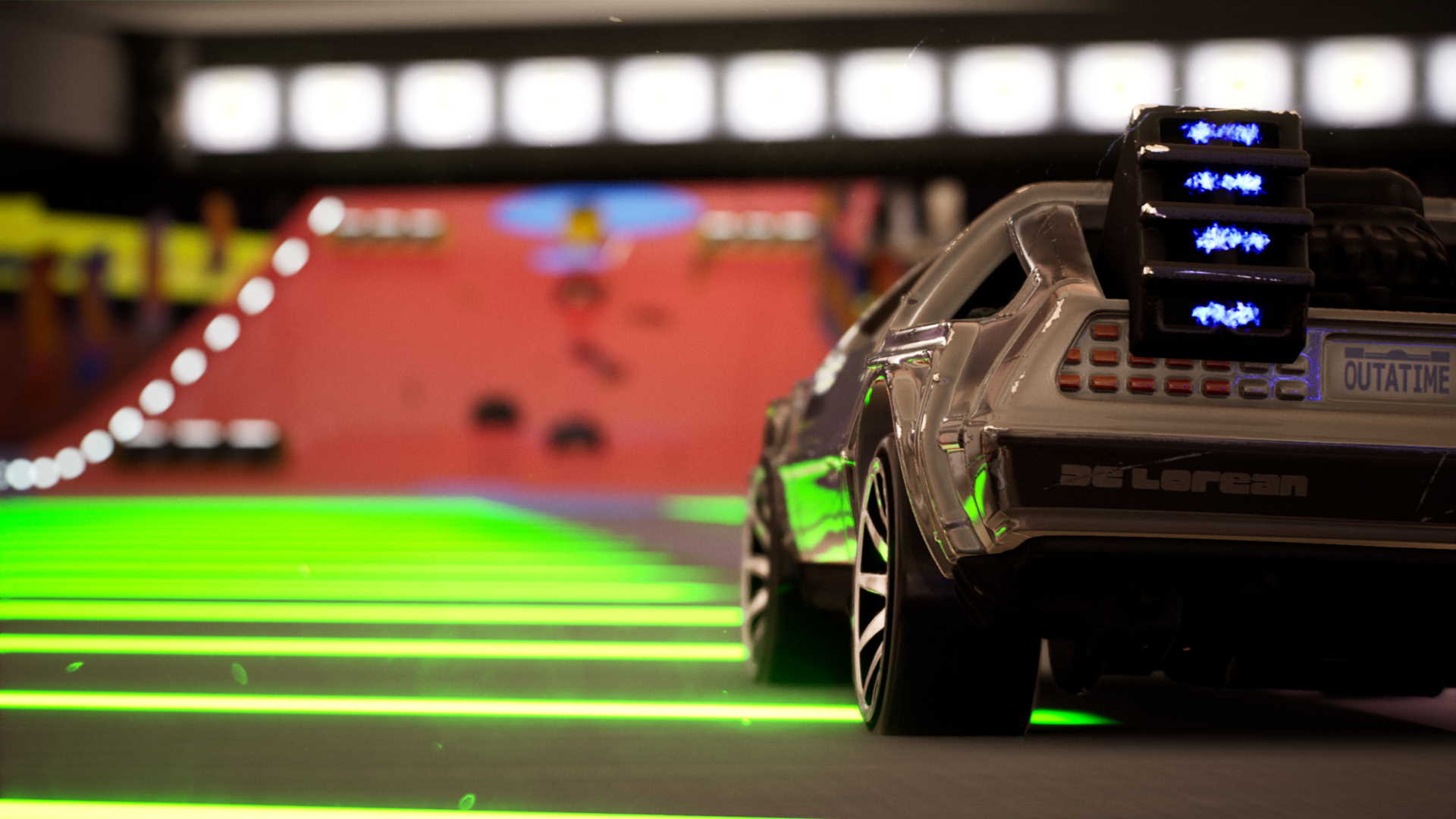 The cars look incredible and there are several that will be instantly recognisable, like the Tanknator, Bump Around, Veloci-Racer and GT Scorcher. There are also several real-life licensed cars and those drawn from pop culture that can be unlocked, picked up in the in-game loot crates (which look like the actual boxes you purchase Hot Wheels track sets in), or purchased with in-game currency. I was lucky enough to grab the DeLorean from Back to The Future early doors, which absolutely delighted me. You can even get your paws on K.I.T.T and play out your inner Knight Rider Hasselhoff race fantasy.

The heft and power of the PS5 really makes the cars and tracks sing. Just to double down, these look like toys – right down to the seams and edges or materials used to make them and the moulded Hot Wheels details on the undercarriage. You can clearly make out where metal meets plastic, and see them get chipped as they batter into each other during races. My breath was taken away when I spotted that you can actually see fingerprints on the cars. How cool is that?

Looking good is one thing, thankfully the race mechanics are superb too. Although there are turbo boosts that can be triggered, which vary in their execution depending on which Hot Wheel you are controlling, there are no other crazy power ups and this doesn’t play like a kart racer at all, something I think many may have anticipated would be the case. I felt it has much more in common with a pure arcadester like OutRun 2 or Burnout, with a focus on drifting and employing the boost to make up ground and surge ahead of your rivals. As you can adjust the vehicles in the air, you can execute a landing from a jump by ensuring you are leaning in the right direction as you hit the track. Remembering you are playing with toys, there is a chance that you will end up flying off the track at times, or succumbing to one of the obstacles. You can get blown off course by a fan, or even confronted by a giant spider and its web.

It isn’t easy to master, and I found that it took me a good few races to get on the podium, but once it all clicks and you start to master the unique abilities of the cars at your disposal, you will start to make progress. Choosing a favourite car isn’t easy and I cycled through a few options before settling on my perfect dinky whip. Things are helped by the magnificent PS5 controller, delivering comfort and that sweet adaptive trigger throttle, but the haptic feedback here really adds to the experience. What a time to be alive when an arcade racer feels this much fun. 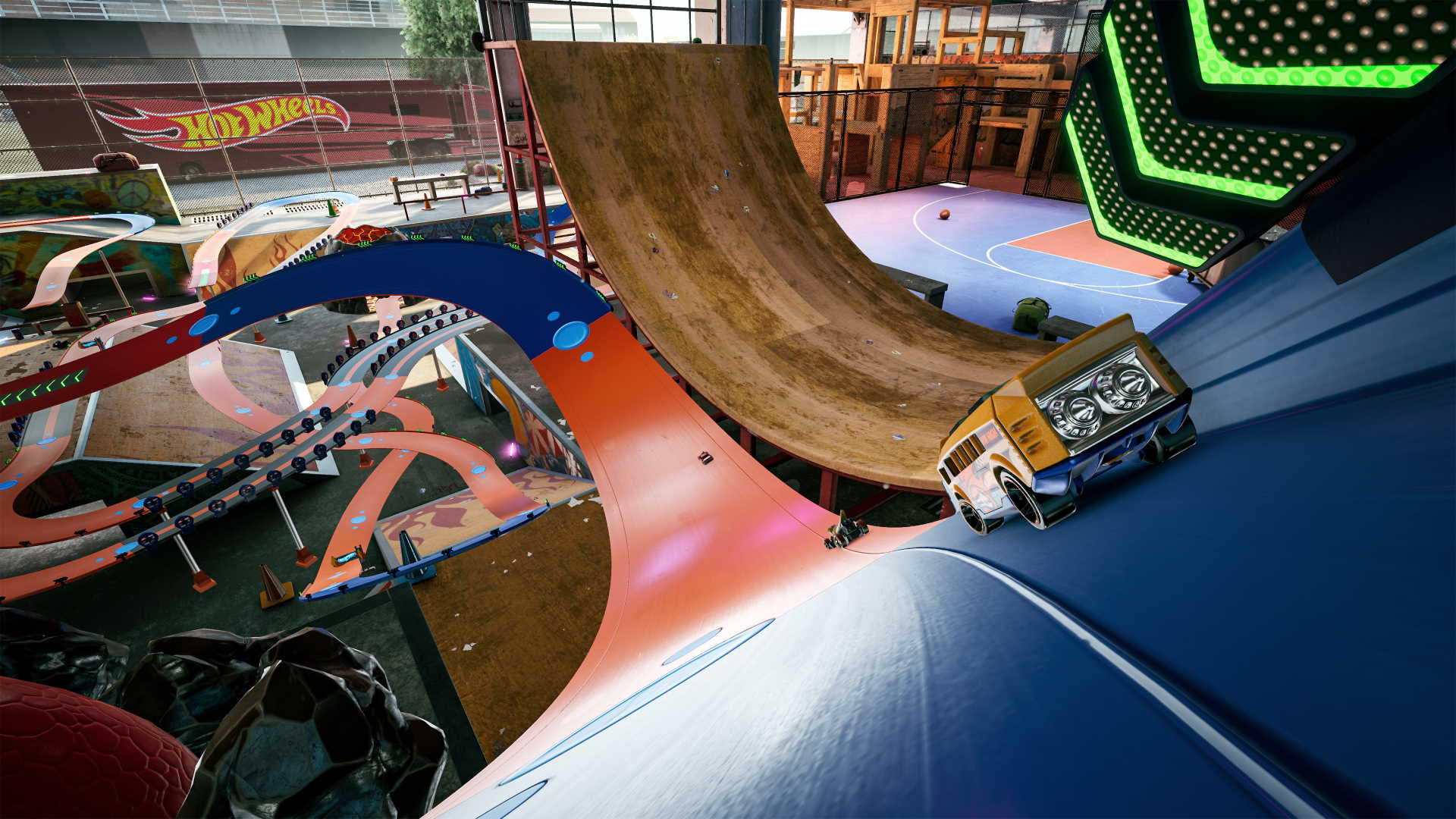 There is a plethora of things to see and do. If you are a fan of the subject matter, then like me you will spend an inordinate amount of time looking at the cars themselves and trying to remember which ones you had as a nipper, and fending off the urge to compulsively re-purchase them as an adult who should know better. A story mode, on and offline multiplayer and quick race modes are all present and correct, you know the drill. The in-game currency and blind box unlocking system seems fair enough to me, and there are no microtransactions which is a boon.

One of things I was most excited to try was the Track Builder, and it does not disappoint. Basically, what you have is a dream for an eight-year-old me; virtual access to an endless supply of Hot Wheels track, and dead simple construction tool, and limitless possibilities. You have only one set parameter which is to select your starting point, and can then lay segments of track, with customisation options out the wazoo. You can add obstacles and modifiers like turbo boost tiles and magnetic strips, alter the colour of the main track, add bumpers, guardrails, fans, and of course fashion crazy loops and corkscrews in a number of different environments. It is wicked.

Having watched the guys from Milestone be interviewed about Hot Wheels Unleashed it is clear that they had a vision for what they wanted to achieve – giving gamers the chance to feel the sensation of how it feels to actually play with toy cars again. Whilst I would always pick the real thing over a game, after playing Unleashed it is a close-run thing. This is a great time, make no mistake.

Not only a blast of die-cast nostalgia, but a brilliant arcade racer to boot with superb customisation options.