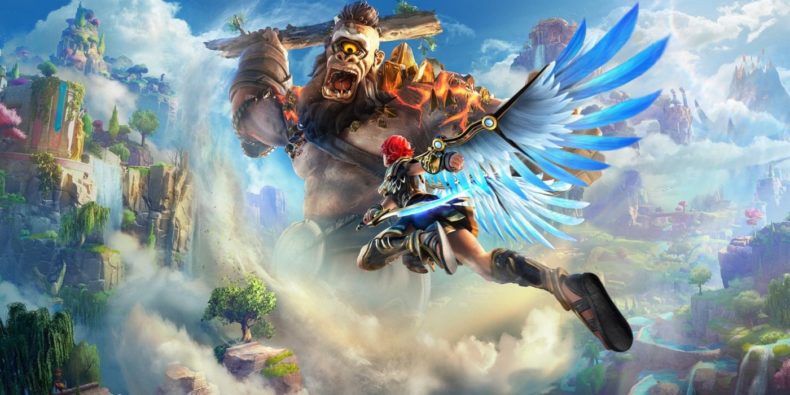 There’s no point ignoring the elephant in the room. You know, the one stomping its feet and blowing its trunk, craving for attention. Immortals Fenyx Rising is very similar to The Legend of Zelda: Breath of the Wild. Whether that gets under your skin or not, you’ll encounter so many things in Ubisoft Quebec’s latest epic adventure that feel almost identical to the legendary masterpiece. Climbing, swimming, and running drains stamina bars which you can increase by completing Vaults (*cough* not Shrines). You can’t fly but you can glide after finishing one of your first main quests, and the Gods will give you Hero Blessings. You can pin locations on your map with multicoloured markers, move metal spheres with a magnetism-like ability, and tame horses whilst exploring the open world.

Now we’ve addressed how both games are kindred spirits, it’s time to talk about why Fenyx Rising should be a shoe-in for everybody’s game of the year lists. Whilst there are tons of similarities with BotW, Immortals Fenyx Rising is a phenomenal action-adventure game featuring loads of intricate and inspiring puzzles, superb combat, and one of the most thrilling stories of 2020. The writing is excellent, and the titular character of Fenyx is so loveable it hurts.

The story is centred around the re-emergence of Typhon, the most powerful Titan of all time. The Gods have been cursed, their essence lost, and their fates doomed. Greek heroes like Odysseus and Herakles have been corrupted, and almost everyone else has been turned to stone. When it seems like all hope is lost, an unlikely hero called Fenyx embarks on a quest to save Greece and destroy Typhon once and for all. You get to customise your hero to be male or female, or non-binary if you so wish. Hair colour, their voice, facial hair, and tattoos can all be chosen before you head out on your adventure. 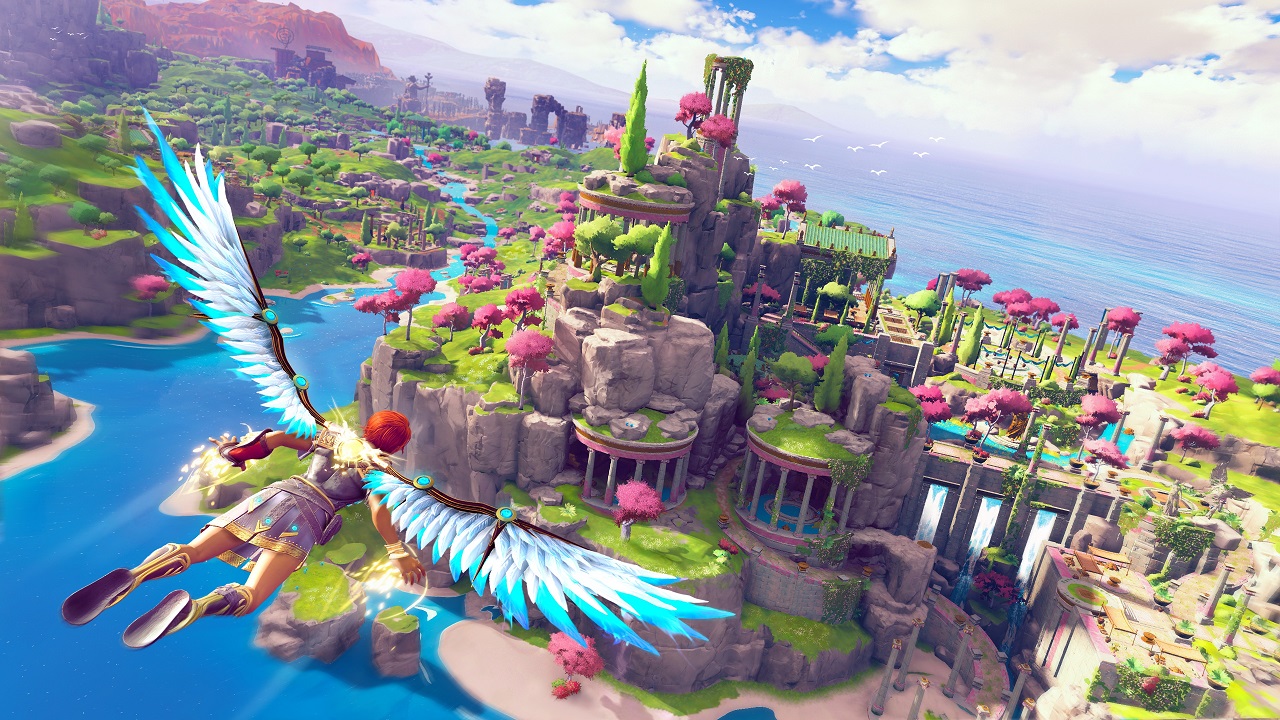 Everyone is going to have their own version of Fenyx, and mine was a girl with a big heart and purple hair. Jeffrey Yohalem has written one of the finest scripts of the year, if not the decade. Throughout your adventure, Zeus and Prometheus act as narrators. They help to fill in the story, react to what Fenyx is doing, and provide some genuinely funny moments. The humour lies sweetly at the heart of Immortals Fenyx Rising. It has lighter moments, but there’s also a moving tale about a father’s realisation that he might not have been the dad of the year.

Your main objective is to restore the essence of the Gods you encounter. Each God is tied to a particular area, and after scaling their statue, you embark on a quest line that has you completing varied tasks that never follow a generic pattern. You might have to solve a puzzle, then fight some enemies, then dive into a Vault to recover their essence, but it always mixes it up so no two paths are the same. Each of the Gods has a unique story in the way it relates to Zeus, their father, and you learn so much about who they are and how they came to be. Ares has become a chicken, Aphrodite a tree, Hephaistos an automaton, and Athena a child. Whenever you encounter a God, you’re instantly drawn in to their history, and the voice-acting is constantly top notch.

Outside of the main quests, Immortals Fenyx Rising offers you so much to do. By using a skill known as Far Sight (pressing down on the right analogue stick), you can survey the land and reveal certain places of interest. You can always explore freely, but using Far Sight helps you to uncover the closest puzzles and chests far quicker. Everything on offer helps to improve Fenyx’s skills as well as bolster their weapons and armour. 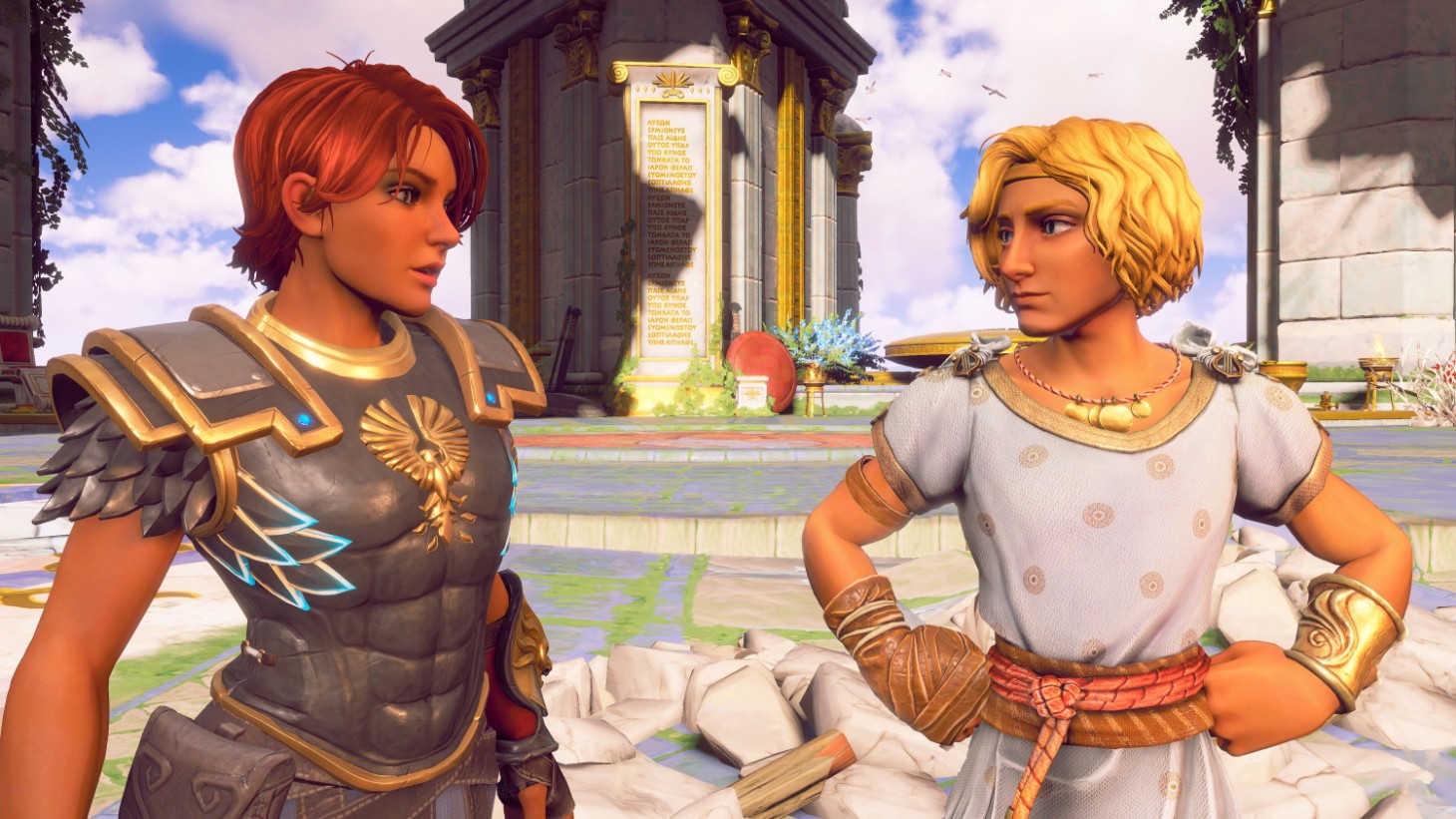 By completing Mythic Challenges, you gain Coins of Charon which can be used at the Hall of the Gods (the game’s hub) to unlock new God-like abilities and improve on your standard skills. Some of these are game-changers, such as Hephaistos’ Hammer. It does tons of damage, but it does consume a lot of stamina. These challenges are also excellent. You might have to find blue spheres to place into a constellation, race to the end of a course in a set time, or fire an arrow through rings until you light a pyre at the end. Whatever the challenge, I had a lot of fun trying to complete them. They can be tough, but the rewards are well worth it in the end.

Chests are scattered throughout the world, containing new weapons and armour sets, or cosmetic skins and upgrade materials, and each piece of armour or weapon has a particular buff that remains until you switch it out. You can also tame horses that have particular advantages, whether that be increased stamina or additional speed. Collecting enough Ambrosia will allow you to add an additional health chunk to your bar, diving into Vaults of Tartaros and solving the puzzles within grant you new gear and lightning bolts (which are needed for improving stamina), and side quests can be picked up to flesh out the overarching mythology of the story.

Combat in Immortals Fenyx Rising is sublime. Pressing the right shoulder button attacks with your sword whilst the right trigger lands a blow from your axe. Dodging or parrying successfully slows down time and opens up a small window of opportunity to do excess damage. When you start to incorporate all your Godly Powers, fighting plays like a dream. You can raise spears from the ground, charge fast at your enemies, use an almighty hammer to cause untold damage, and pull yourself closer to enemies to land a flurry of melee attacks. You’ll also unlock Phosphor – a Phoenix bird with a mix of powers – to aid you in battle. 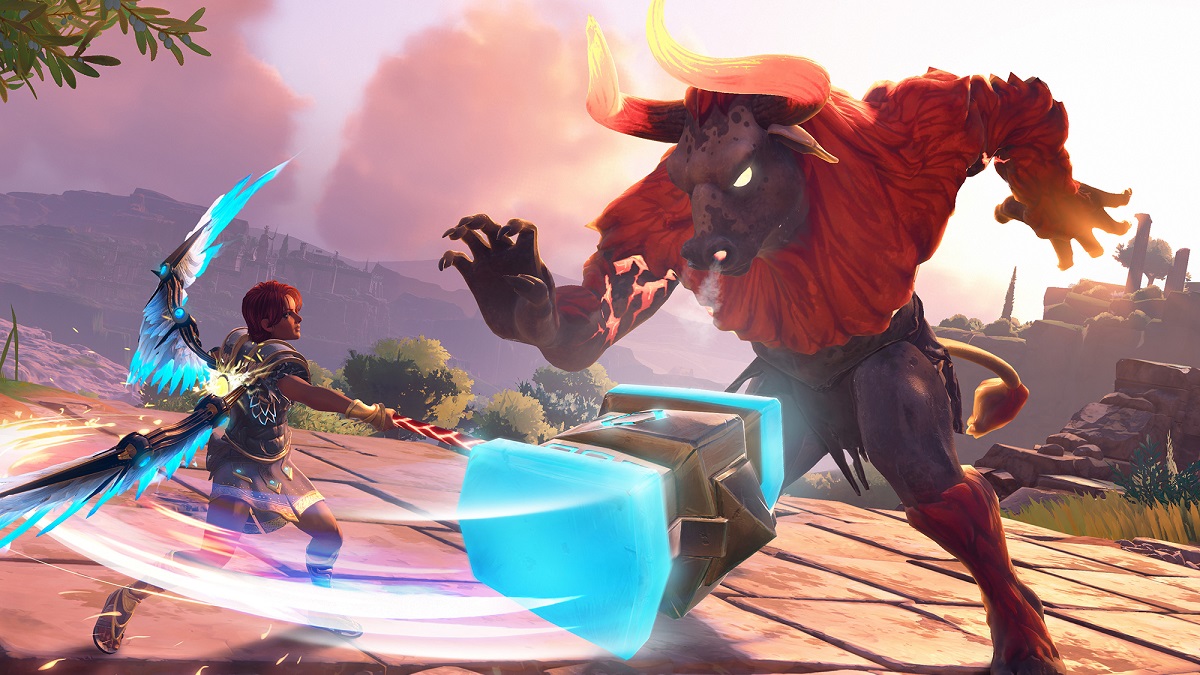 Your bow and arrow is another great piece of gear, and tracking an Arrow of Apollo as it flies in slow motion towards an enemy’s head feels incredibly satisfying. Your bow becomes an important tool in many of the puzzles as you’ll need to fire with precision at targets that change wind direction, or hit other targets that open blocked doorways. You’ll fight a wide range of enemies straight from Greek mythology: Cerberus, Griffins, Minotaurs, Cyclops, Hecatoncheires, Harpies, and plenty more. Each one attacks differently, and you’ll always have to change tactics in battle because packs of varied monsters pop up all the time.

The environments in Immortals Fenyx Rising are gorgeous. From lush forests with glistening blue lakes to lands covered in dirt, ironworks, and fire, there are so many stunning places that they become a joy to explore. The mythological backbone of the game is present everywhere you look. Giant sculptures and monuments, castles with majestic architecture, and mountains that reach the heavens, the detail and design is near perfection. To add to how good this game looks, Gareth Coker’s score is incredible, using authentic Greek instrumentation and adding his own unique twist to suit the mood and area you’re in.

Travelling around the different regions is another part of Immortals Fenyx Rising that I adored. Using the Wings of Daedalus to glide off tall cliffs or monuments and riding around on your horse gives you chills, and climbing up mountains or golden buildings provides a sense of accomplishment due to the need to approach each one with caution; if your stamina depletes halfway, it’ll spell certain doom. At one point, you’ll face the harsh cold. If you don’t light the way with fire then death will be knocking on your door. These environmental challenges only add to the fantastical adventure you find yourself on, and as I look back after spending almost 30 hours with Fenyx, I miss it already.

Perhaps Immortals’ greatest achievement is the variety of its Vaults. Not only do they offer a nice break from exploring, they also offer diverse puzzles with intricate elements, and no two are the same. For example, many take the form of platforming puzzles where you’ll need to navigate wooden crates, metal pillars, and breakable stone cubes around obstacles like levitating platforms and updrafts. Trying to manage the large heavy spheres, air tunnels, corruption fields, and poisonous clouds takes up a lot of time, but the way puzzles are so intricately designed make it hard not be awed by them.

Immortals Fenyx Rising is an excellent adventure with challenging and inventive puzzles, a wonderful combat system, and a rich world ripe for exploring. The dialogue is funny, poignant, and thrilling, with a story that explores every facet of the human condition in a way that is relatable for everyone. It does share many similarities with BotW, almost shamelessly so at times, but this is without a doubt its own game, and the experience Ubisoft Quebec has in making open world games is on show throughout. I guess it depends how much you love Breath of the Wild, and whether you can get past many of the same ideas without feeling a little cheated. It offers a different spin on the stories of Zeus and his children, sweeping you up with its spellbinding tale and beautiful, charming world.

Immortals Fenyx Rising is an excellent adventure with challenging and intricate puzzles, a wonderful combat system, and a rich world ripe for exploring. The dialogue is funny, poignant, and thrilling, with a story that explores every facet of the human condition in a way that is relatable for everyone.