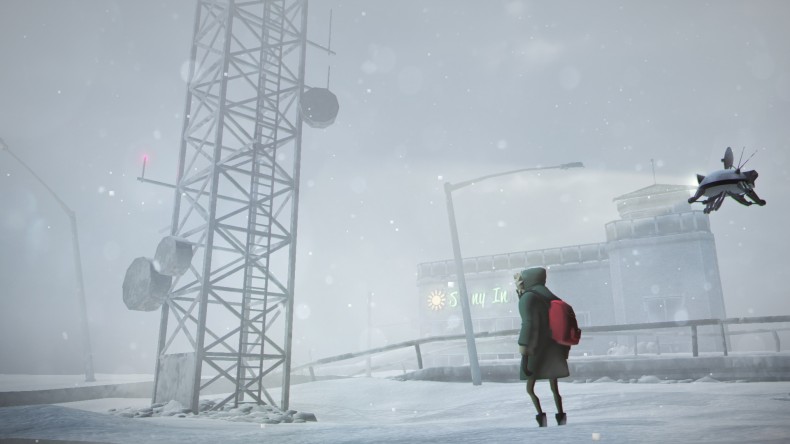 Survival games are a dime a dozen, these days. In fact, whether it’s fair to say this or not, to stand out in the crowd you need to have something special to hook people in. Whether it’s The Long Dark’s aesthetic and mystery, or DayZ’s…well, whatever DayZ has, you’re either first or you’re special. With that in mind, Impact Winter does just about enough to be worth a play thanks to the sum of its parts creating something interesting, if flawed.

First of all it, then, it looks nice. This is a world that has been ravaged by an asteroid collision, and you’re Jacob, a chap who is somehow the leader of a ragtag bunch of misfits holed up in a church. Covered in a snow, this version of our world is a snowy wasteland, with power stations that need rebooting, dark caves that need exploring, and wolves that need avoiding, or killing, depending on your situation.

There’s something about this game, and I can’t quite work out what it is. The soundtrack is excellent, led by a dark, foreboding piano score. It adds to the mood, and although this is very clearly a dark timeline, there’s character here, even if it’s mostly cliches and stereotypes. Take the mechanically skilled girl, who can make things that help the church stay running smoothly, be it a generator or a safe-box. If the game was voiced, she’d have a yee-haw country drawl as she tells you about her daddy who taught her how to take apart her first mustang. That kind of character, warm but a bit played out. The hook is that you’ve got thirty days to survive. A mysterious radio voice tells you that it’s coming for you, and from there it’s a case of shortening that time down, surviving as you can. Completing tasks will reduce that thirty days, which is a bit of a strange narrative conceit. For example, completing a quest for our cowgirl mechanic will slice 12 hours off that thirty days: you get the idea.

Exploring is the best part of Impact Winter. While you’ll encounter numerous NPCs along your journeys, each with their own traditional “I’ve lost X, can you find it please?” quest-line, it’s the caves, the remains of the world we once knew; the looting that satisfies. See that meat-truck on the snow-covered highway? It’s got raw beef and you can cook it, or ration it to your group of survivors: keeping them happy and well is part of the game, too.

In fact, Impact Winter borrows from a lot of games. There’s a slight element of This War of Mine on show, as while you’re out exploring, your base can be ransacked. You’re out, the camp is asleep, but because you’ve not invested in grabbing items that help you craft security, you’ll be looted of some items. It’s a painful reminder of life existing when you’re not around, but it hasn’t got quite the impact of 11 bit studios’ horrifyingly dark Gaznavia. Elsewhere, you can only carry so many items, and the Resident Evil 4 inventory system makes an appearance. Each item will take up a set amount of space on a grid, and you can move it all around to try and squeeze just one more plastic cup into your pockets. Ultimately, the survival aspects join together to make for some stressful moments. Early on I found a rifle and ammo, but I wasn’t looking for that. Foraging for the crafting materials so I could make an item that makes the campfire burn longer is vital, but if I turned up without them, but with a gun, would they thank me, feeling more safe? Luckily there’s usually enough time to do a few runs before you need to sleep or recover somehow, and the item and physical/mental management within the game is loose enough to allow you to actually enjoy playing it, while still mattering.

On top of all of this, you’ve got a strange robot buddy called Ako-Light (who is also the explanation for how you can carry so much stuff, and it’s makes a nice change that a developer has bothered to do this instead of just doing it because video games) that floats alongside you. This robo-dude is your lifeline, coming with a battery and a tool that lets you ping the area to scout for places to dig, or just to keep an eye on danger. Adding yet another resource to keep one eye on, your pal has a battery which drains with the use of any of its skills. Returning to the church instantly recharges it, so again, not too punishing.

Impact Winter is a strange one, because it left an impression enough for me to say “Hey, this is pretty cool in some ways”, but it also feels unfinished. There’s plenty of content and it’s not like the game crashes all of the time, but the menus feel awkward (especially with a controller), and once I clicked to “exit” the game, only for the menu to decide I’d clicked play, instead. It all feels a bit early access, which sounds like an insult, but it isn’t meant to. It’s not terrible, but it’s also a hard one to recommend, and I get the feeling it’s one that we may revisit in the future and update the score for, when it’s all patched and tightened up.

Very long loading times
Menus are a bit much to navigate
Buggy, and feels unfinished

It's not terrible, but it's also a hard one to recommend, and I get the feeling it's one that we may revisit in the future and update the score for, when it's all patched and tightened up.