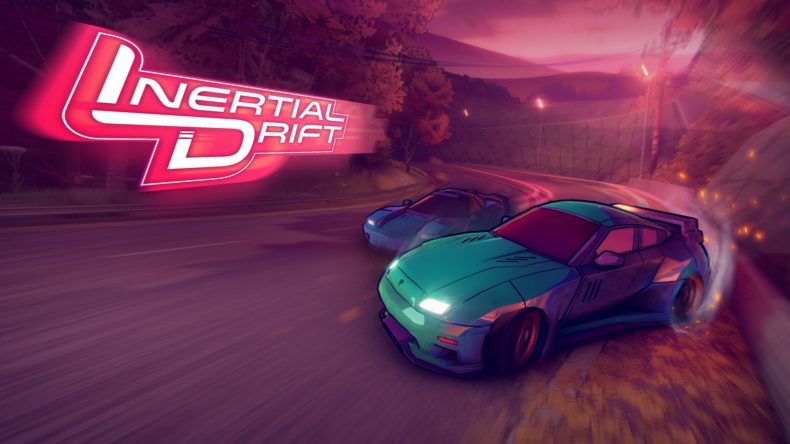 Believe it or not, before The Rock and Vin Diesel started fighting each other and blowing up everything on the screen, the Fast and Furious franchise was actually about cars and street racing. Who knew? One of the best was actually the third, Tokyo Drift, which didn’t really feature any of the main cast. Funnily enough, it was all about drifting, which brings me neatly to the game I’ve been playing: Inertial Drift.

No, it has nothing to do with Vin Diesel’s mega franchise, I just needed an opening paragraph for this review. The title of Inertial Drift is, however, a riff on the classic Initial D manga/anime series. Which, funnily enough, was also about drifting. It’s clear that developers Level 91 Entertainment are fans, especially when you see the anime-inspired visuals of Inertial Drift. 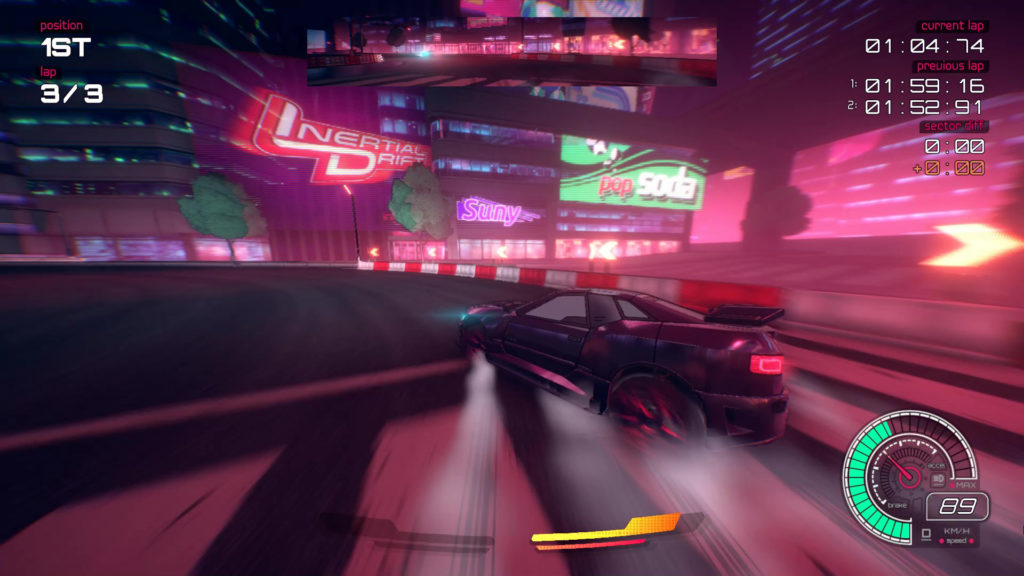 But what really sets it apart is its control scheme. You might wonder how different a driving game can be – I did too – but this one truly is different, it uses a twin-stick setup. Yes, you read that right. It feels a bit strange at first, when you move the left stick and the car lurches slowly, but that’s where the right stick comes in. The right stick controls the angle of the drift, and when you get the hang of it, it feels incredibly intuitive.

It’s not as simple as just yanking the right stick around, effortlessly drifting around corners without a care in the world. Indeed, each car has its own characteristics, with some needing much less speed when turning into the bends, or they’ll need gentle throttle or brake usage to keep the back end in check. Some can be a bit too awkward to handle, but most feel great to drive once you find the key to their driving style. It always feels cool when you get a drift just right, throwing the car around at impossible speeds and with impossible precision. Of course, the totally arcade physics help with this. 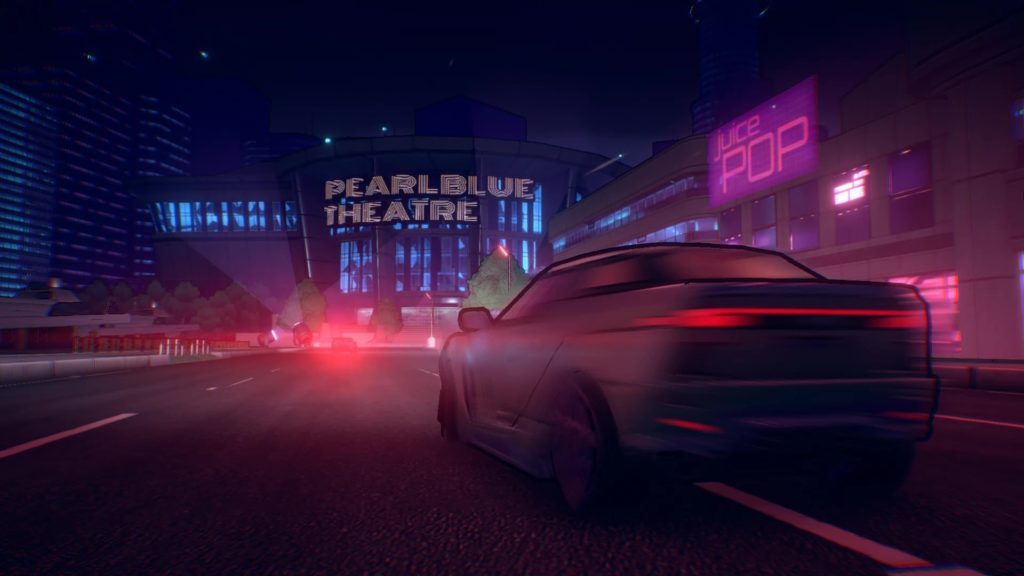 Another thing that sets Inertial Drift apart from the competition, is its story. It’s actually a bit of a visual novel too, with each character having their own path to follow throughout the game. You’ll start with a choice of Edward, Ada or Ibba, each determining the overall difficulty, mainly due to the way their cars handle. Ada’s, for example, is nicely balanced for the average player, while Edward’s is extremely easy to control. As you play through their stories, you’ll unlock extra challenges which, when completed, add extra cars and characters to other modes. This means that there is plenty of content to keep you playing for many hours.

As I mentioned earlier, there really is a distinctive anime look to this game. Whether you’re racing through the neon city, or down the snowy mountainside, everything looks like it’s bathed in a glow of pinks, blues and reds, depending on the selected track. There are subtle visual cues for each run, like lights lining a corner to denote a heavy braking zone, or painted roads signalling where best to place your car as you drift around a bend. The animation as your engine revs on the start line, the car bucking like a bull being held back before stampeding, adds to that anime styling. The way it swings out in drifts, completely unrealistically, just makes it look cool. 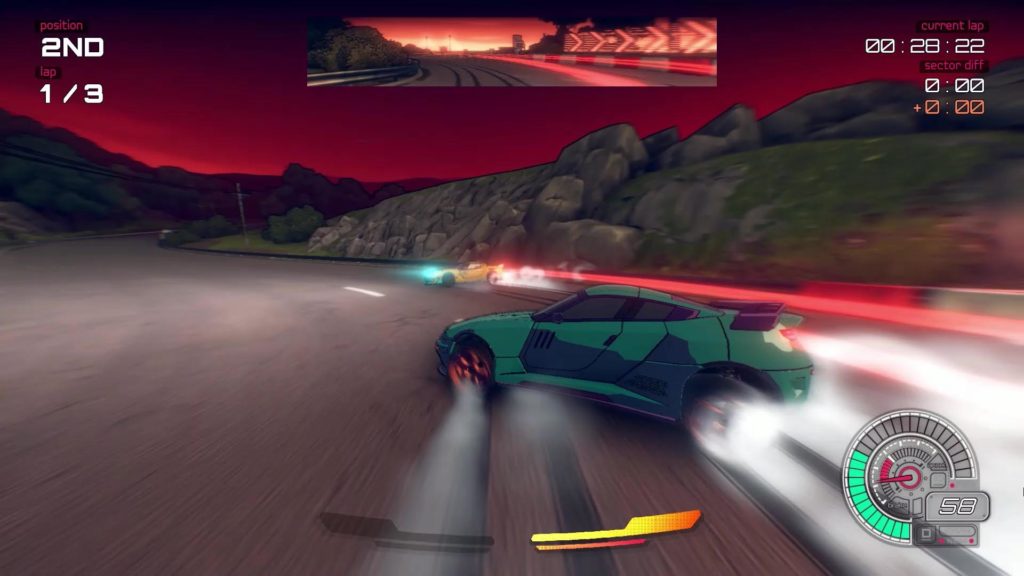 That’s one of the main things about drifting, right? It’s about style, as much as it is about speed. This is reflected in the stories told, whether it be Edward wanting to just enjoy the road trip or Ada wanting to learn the ins and outs of each run, it almost encourages you to just have fun and enjoy the feeling of drifting around each location. You don’t always have to win an encounter to progress, either. The story just adapts to how you perform, making it feel like more of an experience than a genuine racer.

It can be a little repetitive at times, though. During the story, you’ll often drive the same route several times before moving on. It works, as you learn each route more with every run, but some will wish there was a little more variety on offer. That’s where things like challenges and Grand Prix mode come into play, at least. Challenges give you a set car and objective, such as beating a certain time or driving as far as possible, allowing you to unlock new cars for other modes. The biggest challenge comes from Grand Prix mode however, in which you have a limited number of tries to beat five events. Each event is essentially a set challenge for whichever car you have chosen, some offering a real test of your skills. This will please the hi-score players, as they embark on their unending quest of self-improvement.

Inertial Drift isn’t your typical racer. Not just because of its unique control scheme and visual novel-like story, but because there’s very little actual racing in it. When you do take on another driver in a head-to-head, collisions aren’t an option so it’s still more about your own drive than anything else. But when you get into it, when you nail that perfect chain of drifts, it brought back feelings of playing games like Rage Racer. It makes you feel cool, and that’s exactly the sort of game we need right now.

With its innovative control scheme and anime visuals, Inertial Drift is an incredibly fun and rewarding mashup of drift racing and visual novel.