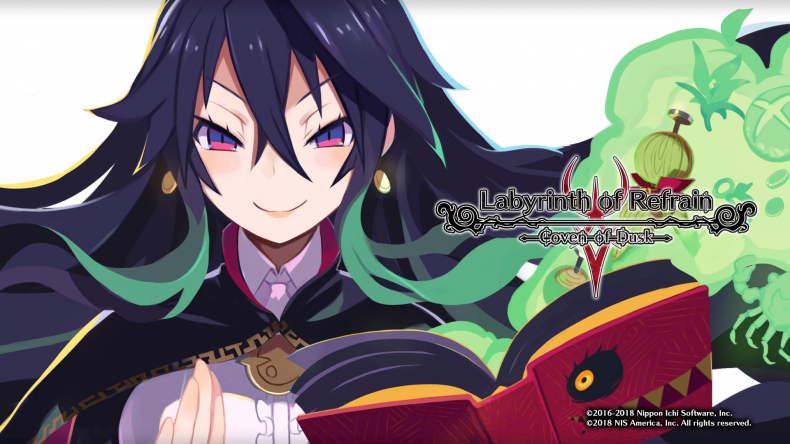 Being a fan of niche Japanese games and smaller genres in general is often annoying because of how uncertain game releases can be outside Japan. NIS America has almost always been on the ball for localisation announcements for games from its parent company NIS in Japan, but a 2016 Vita exclusive in Japan seemed like it would never release in the West. That game was Labyrinth of Refrain: Coven of Dusk. When a PS4 port was announced for Japan, I assumed we’d get a localisation announcement soon, but nothing happened. Thankfully NIS America surprised everyone at the end of a press event by announcing a localisation for PS4, Nintendo Switch, and PC. While it is sad that the original Vita release isn’t seeing an English release, I’m glad it is releasing on both the Switch (Portable) and the PS4 (main platform).

As the name suggests, a big part of this game revolves around a labyrinth which happens to be in a town called Refrain. This labyrinth is under a well and you play as a book owned by a witch called Dronya who has an annoying assistant called Luca. The book in question has the soul of a person who has actually traversed the labyrinth before and you can command puppets in this labyrinth to do your bidding. Humans cannot survive so you end up using puppets who come to life under the various conditions in the labyrinth. DRPGs usually have throwaway stories that serve as a means to the end for exploration in big dungeons and I enjoyed the story here quite a bit. The characters are interesting and it never got old seeing Dronya getting into some choice situations with NPCs and taking frustrations out on Luca. The parallels with Disgaea come in with the character creation for puppets that manages to properly seep into the design here. The customisation options are nearly endless and there are boatloads of terms thrown at you right from the get go. There are so many options while creating a character for use here like the growth pattern, skills, and more. You then assign them into a coven through a pact which has certain bonuses. Eventually, you will be able to use a set of 40 puppets in the labyrinth.

Customisation aside, this is a true Japanese DRPG so movement is grid based and in first person. You can move the camera a bit to look around slightly, but your basic movement is fixed and every step counts. Each floor is full of treasures, secrets, enemies, traps, and more. As you progress through the story, you unlock more skills that help you out in the labyrinth through Dronya who will let you learn useful abilities. The dungeon designs are very good even though the actual aesthetic could be better. While this is definitely much better than most DRPGs, it is disappointing that the Etrian Odyssey games manage doing so much more visually on the DS and 3DS which are much lower resolution compared to the Vita which is what Coven was designed for. Having played this on both PS4 Pro and Nintendo Switch, the big difference is performance. If you care about high and consistent framerates, get it on PS4. I had no slowdown in my time on PS4 while the Switch version had some slowdown in certain situations. The game is slow paced and turn based so having 30 or 60fps won’t make a big difference to many people, but it is something to consider if you have multiple platforms and are wondering where to get Coven. While exploring, there are two main mechanics to keep in mind. The first is mana which is something you can find while exploring and this affects a few things. Gaining more mana will help you get better drops and the likes, but there’s a limit above which enemies will start making life super difficult for you. This is what you use to unlock abilities through Dronya. Reinforcement is the other mechanic to keep in mind and it initially lets you break through walls which is useful if you’re in a tight spot or just if you want a shortcut. Speaking of Mana, you end up using it to tweak the difficulty. An hour or so into Coven, you get to use Mana to turn the difficulty lower or higher. The standard difficulty felt right, but I’m glad they give you options for players who want less or more of a challenge.

NIS America’s localisation for this release isn’t just your usual niche game localisation with subtitles, but one that has full English and Japanese voice acting options in addition to English and French text options. The voice acting is very well done in English. Tenpei Sato returns for an excellent soundtrack that fits the game and aesthetic perfectly. This release is definitely NIS’ best coming together with everything aligning for the best. I’d go so far as to call this a DRPG fan’s dream game. Disgaea games are known to go batshit insane with various stats and customisation, but the way they introduce new elements and terms has always been good. Labyrinth of Refrain’s biggest flaw is with how it bombards you with too many terms right at the beginning which may overwhelm many people. While the mechanics and changes to the traditional Japanese DRPG formula are great, the developers should’ve done a better job at introducing things to new players.

It is pretty shocking that NIS’ first DRPG ever is this fantastic. There was a time where I’d only be able to recommend Etrian Odyssey for people looking for DRPGs but the likes of Experience Inc. and now NIS are providing fantastic additions to the genre. In fact, Labyrinth of Refrain: Coven of Dusk is by far one of my favourite NIS releases ever. Since I love Disgaea and Etrian Odyssey, this is a superb blend of aspects of both with the signature NIS aesthetic. If you’ve been waiting on a good DRPG for home consoles, this delivers in spades.

Labyrinth of Refrain: Coven of Dusk is a refreshing addition to the DRPG genre that is a must play for fans of Etrian Odyssey and those who enjoy NIS' visual style.

You may also like
covenlabyrinth of refrain: coven of dusk