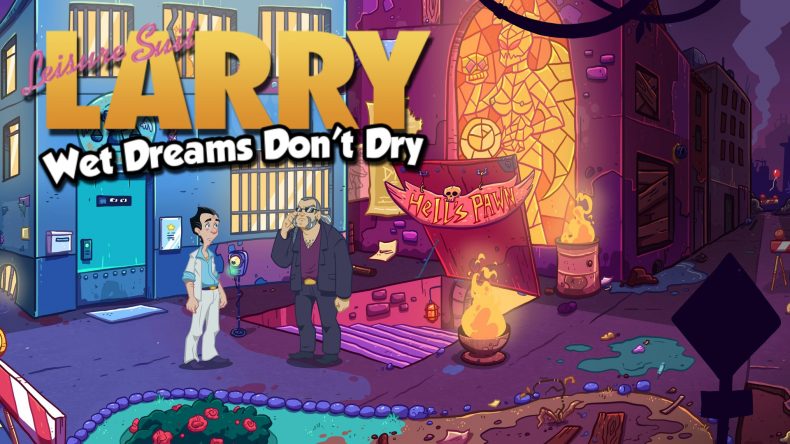 “You wouldn’t get away with that these days.”

It’s a throw-away phrase spouted from curmudgeons like me when we see media from yesteryear just wouldn’t cut it in today’s society. With the constant march of time and the changing attitudes and awareness that comes with it, some things just seem out of touch when reviewed two or three decades later. And if I had to come up with a videogame example of that, the Leisure Suit Larry series would be top of my mind. Its bawdy, over-the-top, sexual objectification of women in the 80s and 90s feel completely at odds with the general public that these days are championing gender equality and the acceptance of broadening sexual preferences and identities. A sleazy old man leering to get his end away with anything with a pulse could and should feel repugnant. Bringing Larry kicking and screaming then into the 21st century, then, is an interesting choice, and one that certainly needs delicately balancing.

I think it’s important I level with you straight away. Back in the day, we’re probably talking the mid to late 90s, I was a (clearly underage) “fan” of the Leisure Suit Larry games. For teenage me, this was forbidden fruit in all its pixelated glory and I lapped it up, enjoyed everything about it from the surly humour to the racy content. I was young, naive, impressionable, and curious about such things. It felt harmless but exciting, and there are fond memories in the recesses of my brain as a result. So to be playing a Leisure Suit Larry game again in 2019 feels incredibly odd. I was excited sure, the nostalgia of 20th-century gaming memories was there. But so was this nagging sense that there isn’t a place for this type of game anymore. And this sense of mixed emotions played out throughout my playthrough, albeit in a slightly different fashion. It’s a cloud of contradiction and confused identity that hangs over a fairly decent point and click adventure title. Just instead of everyday objects to use and combine, you’ll be wielding a variety of objects commonly stuck inside human orifices.

The premise is that Larry Laffer, our protagonist, apparently wakes up in a dark room, without having aged or having any recollection of anything since his latest adventures back in the mid-90s. The main adventure revolves around his character not only existing in a very changed world, and its approach to sexuality, but him also having to come to grips with the advancements in technology that have occurred during the intervening time. Central to the plot is his acquisition of a sophisticated mobile phone, and his pursuit to achieve top ratings on the Timber app (think Tinder) to convince the woman of his dreams to make love to him. Frankly, the gameplay here is what you would expect from a point and click adventure title. There are plenty of items to pick up – some of them incredibly lewd – and you progress by successfully combining or using the items in the correct way. No new or interesting mechanics are included, but it’s well executed and as such feels incredibly familiar and approachable. The different environments to explore are varied, if a little low in number, and feature several quirky, memorable sections. And also, expect a large portion of phallic symbolism wherever you end up.

In terms of how the puzzling stacks up, in the main it feels quite well balanced, with most puzzles feeling surmountable with a fair amount of logic to them. There are however a few obtuse moments where certain odd and specific actions have to be done in the right order to progress which can be incredibly frustrating. Things may have to be examined before an item can be used on them, even if the chosen item is the correct one, leading you to believe your solution is the wrong one when it isn’t. Also, there are moments where you can’t interact with certain scenery because Larry apparently doesn’t have a good enough reason to. Then with the passing of certain story beats, Larry will now rummage where he previously wouldn’t, which feels like a little bit of lazy design. Other frustrations exist in certain parts that require Larry to go back and forth speaking to different people to uncover information on certain topics, or to forward story beats. I understand that this is a point and click adventure but when the game so brazenly requires you to visit a location for a single line of dialogue only to go to a second, a third, and a fourth for progressive single dialogue lines, it wears a little thin. And what’s more, the story centres around a mobile phone, so there’s no reason why Larry couldn’t make use of this and ring people to find out quick information. You could still build up characters and have witty interactions, just with less toing and froing between locations. And the arbitrary rule that you can only call a taxi (how you move between different locations) from the street and not from indoors feels very uninspired.

Having said all that though, I did actually enjoy my time with it. The writing actually does a good job of ensuring that the characters Larry meets are the perfect foil for his out of touch views and goals. It’s clear Larry isn’t going to have it all his own way, and it builds a level of respect for our hero as he bumbles about in an environment that is totally alien to him. The humour is fairly good, not least the puns and double-entendres, but also the way it isn’t afraid to poke fun at itself and its clearly outdated main character. There’s even a portion towards the end of the game with a familiar face, where Larry becomes more self-aware and challenges the chauvinist views he became famous for thirty years earlier. This latest installment also doubles down on the fact that it is set in the current day, holding a lens to how our society has changed over the years, both for good and bad. For every reminder of gender equality, there’s a poignant jab about our selfie culture or the rise of consumerism. And a game that can balance showcasing how much we have progressed as a society and also highlight where we have dangerously slipped backwards, all under the umbrella of sexual encounters and smutty innuendos, is certainly deserving of some praise. It’s fair to say it drew a wry smile on numerous occasions.

As ever with this series, it’s all about knowing what you’re letting yourself in for. Leisure Suit Larry: Wet Dreams Don’t Dry will definitely appeal to those fans of Larry Laffer’s infamous adventures of yesteryear. They’ll appreciate the lick of paint that three decades have afforded him and his surroundings, as well as finding laughter from the interactions and references littered throughout the story. Fans of the point and click genre could also find enjoyment here despite some of the design and logic choices, assuming they can stomach the unabashed crudeness on offer. It’s far from perfect, but Leisure Suit Larry: Wet Dreams Don’t Dry manages to avoid being completely out of touch and irrelevant to modern audiences. Instead, it serves up a reasonable experience that somehow makes an old man in an ill-fitting white suit still look acceptable.

Despite Larry himself not changing in thirty years, Wet Dreams Don't Dry still feels relevant, self-aware and has some decent puzzles for fans of the genre too.

Get Ready to Slip on Your Leisure Suit, Larry Laffer Will Return in Leisure Suit Larry HD