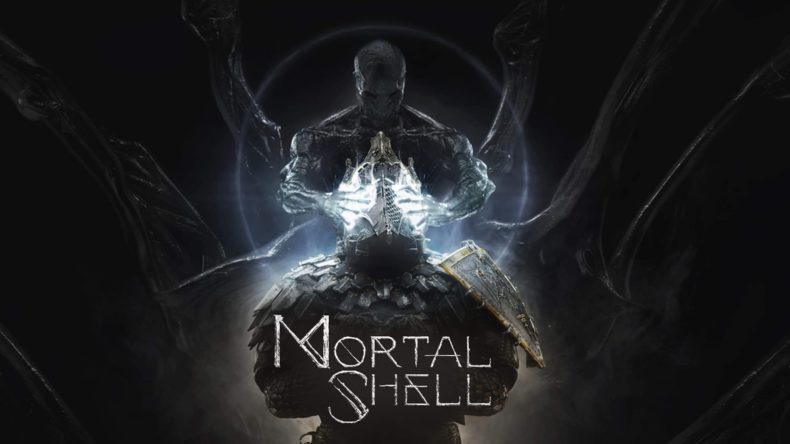 Sometimes when I close my eyes I dream of a far future world where we’ve cured all disease, eradicated war, got rid of Jedward once and for all, and games pertaining to be the next Dark Souls actually tell their stories with a little context. Exposition in flavour text is fine, if your world tells the rest of the tale. But it has become a staple of the Soulslike sub-genre to drop the player into a ready-made world and not tell them why. Because for some reason people think that’s what From Software do. Only it’s not. From games have a ton of story; you just have to work a little bit for it.

Mortal Shell, on the other hand, I’m not so sure of. Even over a third of the way through a second playthrough, I don’t know what my avatar is, why it’s in this grim world, or why I’m doing things I’m told to do. Having experienced a similar feeling recently with Hellpoint, I’m just a little bit fatigued from reading item descriptions and listening to NPCs spout cryptic gothicisms, hoping it’ll be explained in a Wiki later. 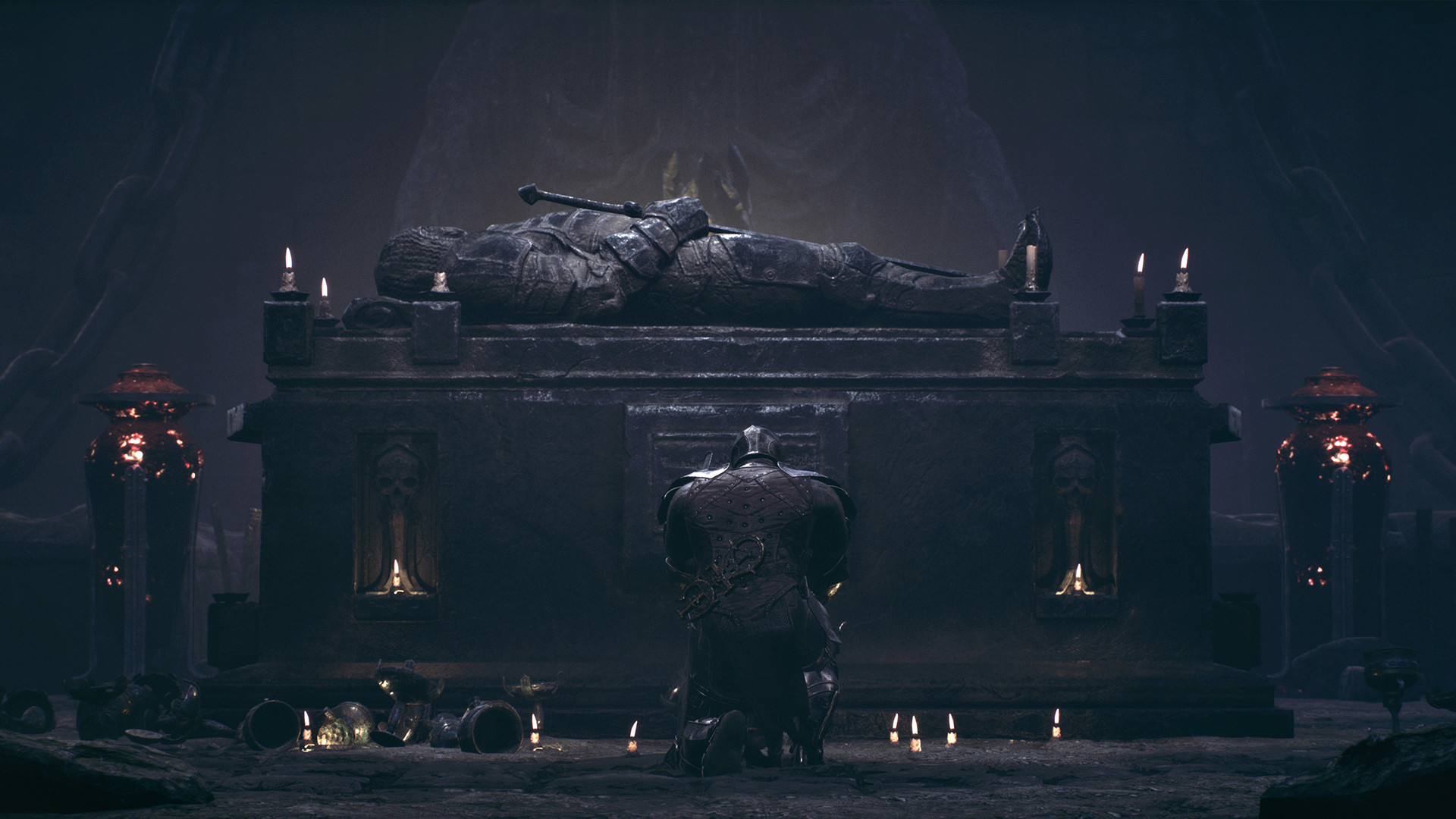 In Mortal Shell you are a Foundling, or at least that’s what Sister Genessa, this game’s version of a Firekeeper, calls you. You’re a kind of semi-tangible spirit able to possess and bond with the corpses of fallen warriors, the titular “Shells”. Once inhabiting one, you can recall their memories to unlock permanent buffs and abilities in a progression system that completely replaces the concept of numeric start increases. It’s actually quite refreshing to not be choosing between Strength and Vitality every time you make it to a safe space, and means that each of the four Shells remains unique.

There’s Harros, the starting option, with an even balance of health, stamina, and Resolve (the resource used to parry and activate weapon abilities). Tiel is a sneaky thief who wasn’t sneaky enough in life, but who has a huge stamina bar for dodging and striking but is dead in a few hits. Solomon was my favourite for a while, again quite balanced but tougher and a little slower than Harros. And finally there’s Eredrim, a tank of a Shell with a huge health bar, but stamina that’ll drain very fast. Each has its own set of skills and buffs to unlock, such as the ability to repair the connection to Eredrim’s shell after killing enough enemies.

And this connection is important, as it essentially functions like an extra life. Each Shell is imbued with the Foundling’s mysterious power, and can harden to solid stone at will (well, it’s on cooldown, but it’s fairly generous). Hardening reflects damage, and can add the weight of crushing stone to a sword swing, but it also freezes the Shell in place when all its health is gone, ejecting the Foundling into the world. One hit at this point will send you back to Sister Genessa, unless you can get back in your Shell, which will refund your health and allow you to fight on. If it happens a second time without an active buff like Eredrim’s, you’ll respawn at the Sister.

As in other games of the genre, the main currency will stay with your corpse on death. Known as Tar, it is spent on unlocking memories and purchasing items from the only merchant in the game, Vas (don’t forget to pet his cat). It works alongside Glimpses, which are bonded to the Shell that finds them, and which don’t get wiped at death. At first, Glimpses are spent on memories too, until you’ve unlocked them all, at which point they can be used to purchase rare items from Sister Genessa herself.

The onus is on exploration in Mortal Shell. You begun in the forests outside the settlement of Fallgrim, and must then venture into three temples to retrieve the Sacred Glands for the Old Prisoner. And if that sounds like gobbledygook, that’s because it is. Mortal Shell fails to provide proper backstory or context unless you want to piece it all together from inscriptions and flavour text, and it’s incredibly frustrating. It’s also quite short for the genre, taking me a little over 12 hours to finish the game. What at first seems sprawling is actually quite linear in many ways, each temple offering a chance to explore and find rare items, but funneling you to a boss fight with the defender of the Gland for that temple.

Here’s where I think many fans of the genre will lose a little interest, because each of these boss fights – even the final boss – is quite easy. You’re just so hard to kill, especially as Eredrim, and enemies follow very distinct, heavily signposted patterns. The method for bosses is the same as every other enemy: hang back, wait until they strike, dodge or parry, and punish. Add to this that one of your parry abilities refunds health and can be upgraded, and most of the initial trepidation goes away. I died a lot, mostly through rushing and not thinking, but it’s not a steep challenge – at least not in the first run. There is a New Game Plus mode when you’re done though, which is certainly tougher. 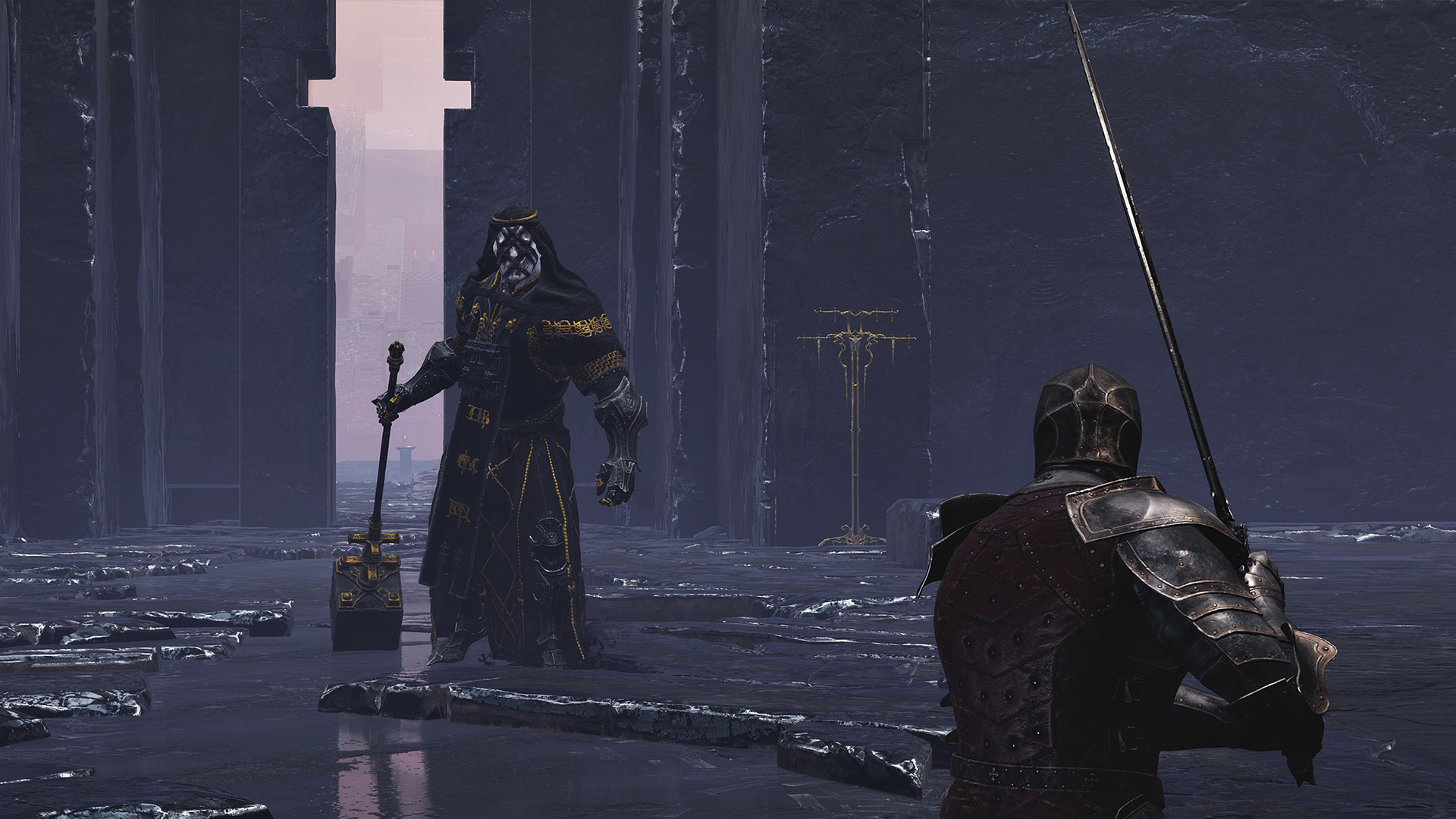 Once you’ve beaten a boss and are in possession of a Gland, the world changes a little. Enemies are more plentiful, some of them are different, and the whole place is covered by thick fog. Also, all the little chests you’ve been seeing in the starter area only unlock when the fog is in, granting some great items as a reward. Once you’ve done it once, you’ll meet an NPC who’ll bring in the fog in exchange for your Glimpses.

There are only four weapons in the game (or five if you count the Ballistazooka, a shoulder-mounted crossbow that I missed on my first run), and three of them are slow, two-handed weapons. The exception is the Hammer and Chisel, super fast and super weak, but deadly in Tiel’s hands as he can attack and dodge so much before his stamina is depleted. Each weapon can be upgraded with Quenching Oil and various artefacts to unlock and improve its unique arts, which can be activated when your Resolve is full. These weapons can only be unlocked by defeating Hadern, a mysterious combatant who bequeaths you the weapon on defeat.

Interestingly, you’ll have to use everything once to learn what it does, and as your familiarity grows, so will the items effects. Things like roasted rat and boiled frog replenish health and stamina respectively, but a variety of tokens and marks add abilities to your Hardening or parry, or even restore your bond to your Shell when you’ve been knocked out of it. And the game is pretty generous with all of them, too. 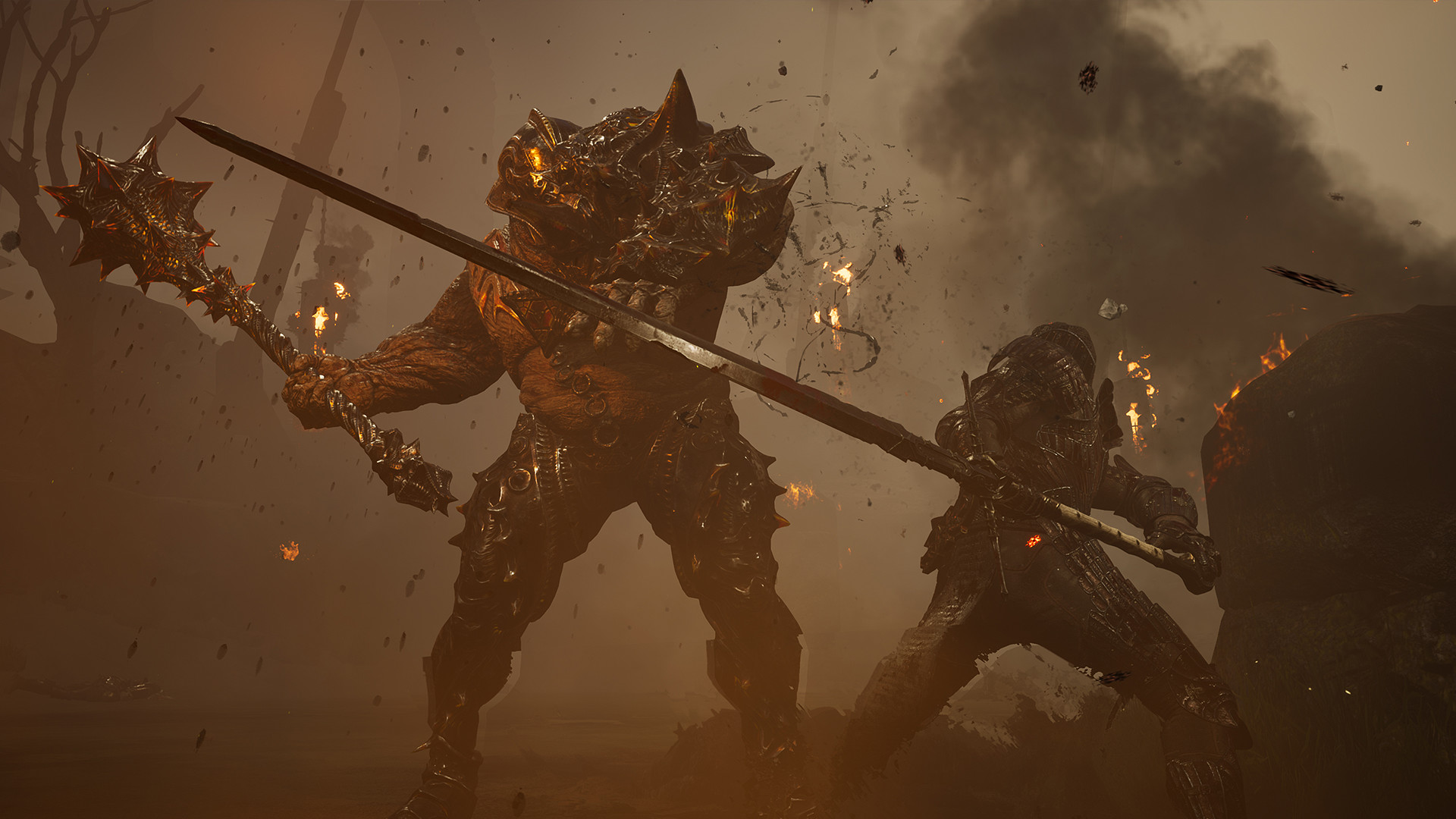 It would be unfair to mark Cold Symmetry down too harshly for anything they’ve done, but something about Mortal Shell feels a little under-cooked. With only four shells, four weapons, four main bosses and four main areas, it feels almost like half a game, not helped by the fact that it’s book-ended by nothing. There’s no story framework, no sidequests, and if there are hidden areas to be found then I’ll admit I missed them and didn’t feel overly compelled to explore every nook and cranny. At the point when I expected the game to open up, maybe finally give me a fast travel option, it ended, and I’d be willing to bet that almost two hours of my 12 hour play time was spent lost and backtracking.

But what’s here is of high quality. Combat feels good, the weight of each swing measured and tangible – although on occasion an enemy will attack straight through your swing or combo. It doesn’t feel deliberate, either, as it’s only some attacks and is annoying each time. The few areas areas are detailed and well-populated with enemies, chests and snippets of broken lore. It looks good too, with little touches to the enemy animation and environments that add atmosphere and vitality to the world. If anything it left me mostly satisfied but hungry for more – and not just repeated new game plus runs but more of the world. If anything, though, I’d say it’s a little too derivative of From Software’s worlds, visually at least. It struggles to really find its own identity and few areas stick in the memory besides the second temple I finished, which was a huge open area full of teleport gates that I almost certainly didn’t fully explore. 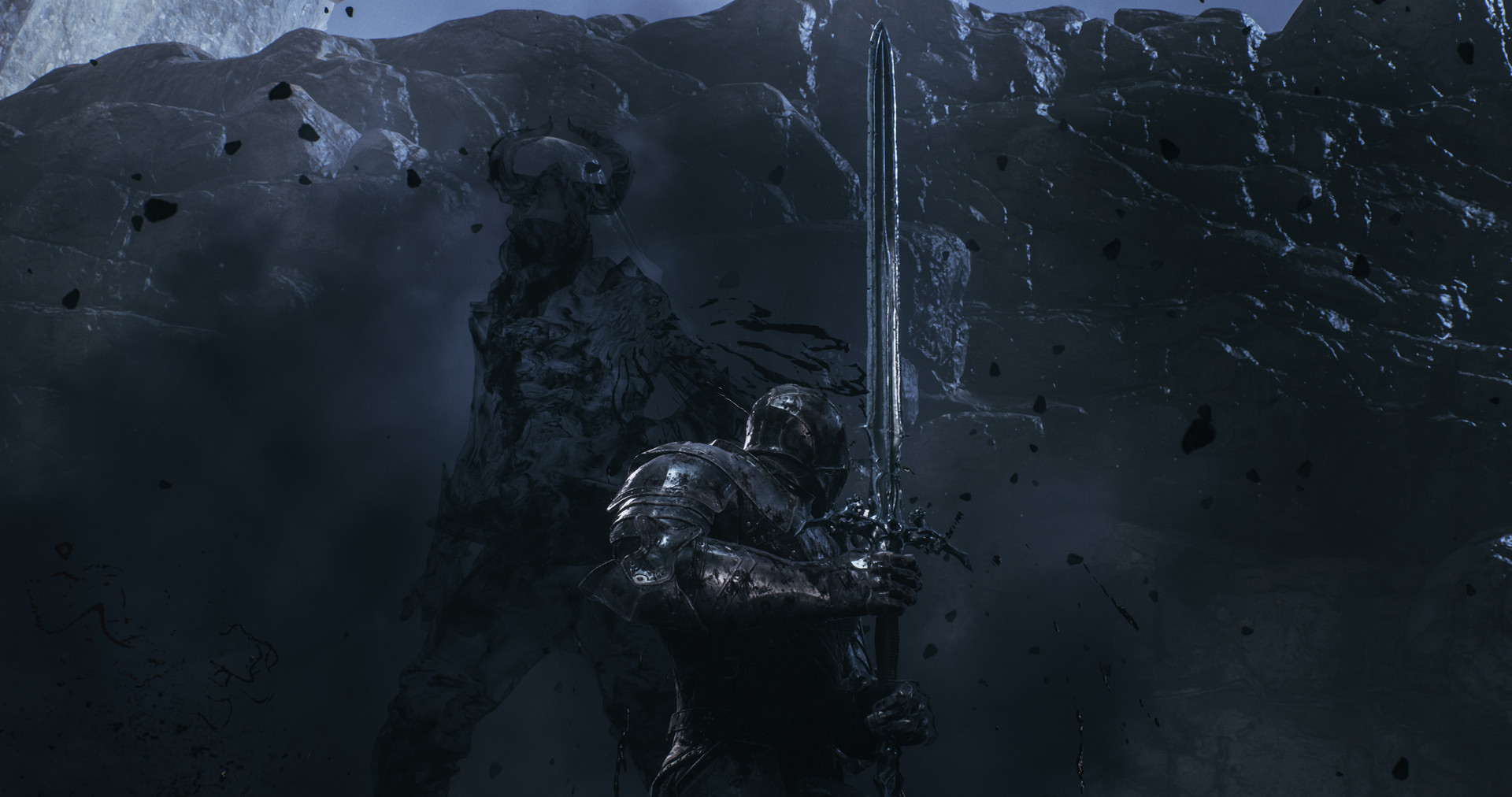 I could have done more in my first run. I could have experimented further with each Shell, maxed them all out, explored every area fully, and I may well go back for a more relaxed run now I know what to expect. Its the sort of game that gets you that way, but I do worry veterans of the Souls games and their ilk will find it too simple and straightforward.

In many ways it’s refreshing to play a 12-hour adventure with a bit of replay value instead of a 40-hour slog or 60-hour open world tick box, and I’ll give Cold Symmetry props for that. Perhaps more accessible to newcomers, it could be a gateway game for those who’ve avoided the genre in the past. Challenging enough to stay entertaining throughout and atmospheric in the right ways, a little more attention to the story would have gone a long way. As it stands, Mortal Shell is an intriguing, compelling adventure, and an accomplished addition to the Soulslike genre.

Quite short
One strategy fits all
Visually derivative

More attention to the story would have gone a long way, but Mortal Shell is an intriguing adventure, and an accomplished addition to the Soulslike genre.