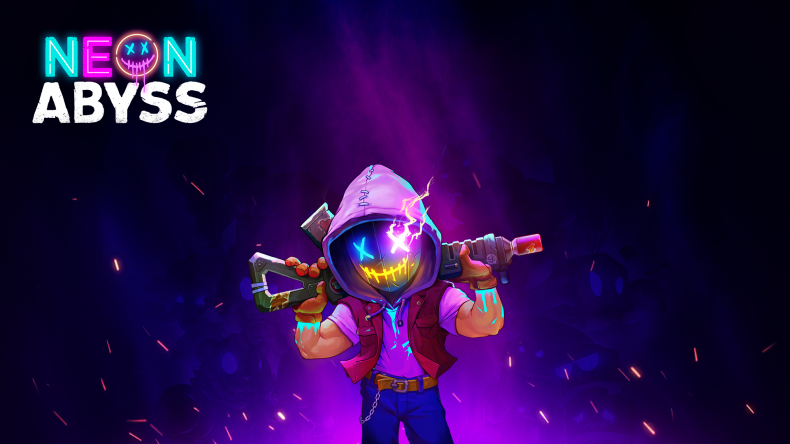 If Neon Abyss has a story, I don’t know what it is. After playing for more than 10 hours, I’m no wiser as to who the characters are, what the Neon Abyss is or why they’re here. What I will say, though, is that I don’t care. At all. Because you don’t really need a story to appreciate what Neon Abyss is doing.

It’s a Roguelite in the vein of Dead Cells, but it shares shooting and platforming mechanics with last year’s Black Future ’88. You are part of Grim Squad, a special team formed by Hades to infiltrate the myriad layers of Hell and put paid to a bunch of new Gods who are causing mayhem in the afterlife. Again, I think this is the case. It’s really not very good at telling a story.

You begin in the Neon Abyss itself, which is a bar seemingly on the edge of Purgatory. Just outside its door is a sheer drop into hell, which you’ll take over and over again. Each stage is a series of rooms filled with enemies, secrets, power ups, weapons, traps and mini games that you’ll navigate until you reach the boss. Kill them, and you’ll advance. However, death will zap you right back to the bar. All you’ll retain are the golden gems you’ve earned from defeating bosses, which the bartender will take in exchange for weapon or item unlocks. Similarly to Dead Cells, once unlocked these items will be added to the huge pool of random drops in your subsequent runs. The sheer number of gear items is impressive, from badges to masks, hats, outfits and gun upgrades. The majority will alter your physical appearance too, which is a nice touch that adds to the uniqueness of each run. You’ll also find new guns with a variety of effects from explosive rounds to dazzling light shows and ricocheting bullets. Explosives will remove rock walls, keys will open locked doors or chests, and purple crystals can open corresponding barriers and receptacles to reveal secrets and items.

You’ll find eggs scattered here and there which you can collect to form a little tail of them that trails behind you. Now and then one will hatch with a chance to grant you a Pet. Each of these pets is unique, and range from things like blue cubes and rocks to teddies, mummies and aliens. Not and then, another hatching egg will upgrade an existing Pet. They have individual abilities such as shielding you, shooting the enemy, or increasing your speed or damage.

Perhaps the coolest element to Neon Abyss is the ability to Seed runs. After each run you’ll be given a code which you can either input at the bar or give to your friends, which will replicate all the gear unlocks, room placements, boss spawns and weapon drops from the run, allowing you to hold speed contests or simply perfect a run. Initially you can only choose one of two characters, Wade or Anna (the only non-male character in the whole line up), but others are unlockanl as you play. They mostly control the same, but they do have unique abilities such as more health hearts, dodge rolls or higher survivability. Movement is easy enough, but jump is mapped to the right trigger by default with the right stick firing your weapon. For some reason I just found it really uncomfortable, so mapped jump to pushing up on the left stick like a more traditional twin-stick platformer and it immediately clicked.

To keep you on your toes between rooms full of baddies, there are mini games to take part in for rare loot, such as a giant piano that requires you to bounce on the highlighted keys to play a tune. Beware though that it will cost a lot of coins you’ve accrued, and you only get one shot per payout.

Fans of Easter egg hunting will have hours of fun here, by the way. The weapon and gear pools are littered with references to games, books, comics, movies and music. There’s a book of Awful Poetry that does damage to every enemy in the room, for example, which riffs off Hitchiker’s Guide to the Galaxy, while one of the laser weapons is painted a familiar red and gold and named the Stark Module. And there are dozens of such recipes scattered throughout.

I only really have two gripes with Neone Abyss. The first is that every now and then during a boss fight the frame rate tanks to an almost unplayable speed for a few seconds. It only seems to happen during the boss encounters and not during every one, but it happened often enough that it felt like a genuine problem as opposed to a one-off. My second complaint is that for all the variety and diversity in the gear and weapons, the levels don’t really differ much from world to world. I was hoping for some bizarre environments but Neon Abyss doesn’t ever really come off the chain in terms of level design.

Still, regardless of these few problems it’s a corking little platform shooter with enough variety and surprises to keep you fully hooked. It’s not quite as sprawling as Dead Cells, but the Seed system is a masterstroke. The myriad pop culture references and massive array of weapons and gear will keep you blasting and laughing for hours, and Neon Abyss’ pixel art graphics and superb soundtrack round off a perfect addition to the Switch’s formidable catalogue of indie treasures.

Neon Abyss' pixel art graphics and superb soundtrack round off a perfect addition to the Switch's formidable catalogue of indie treasures.