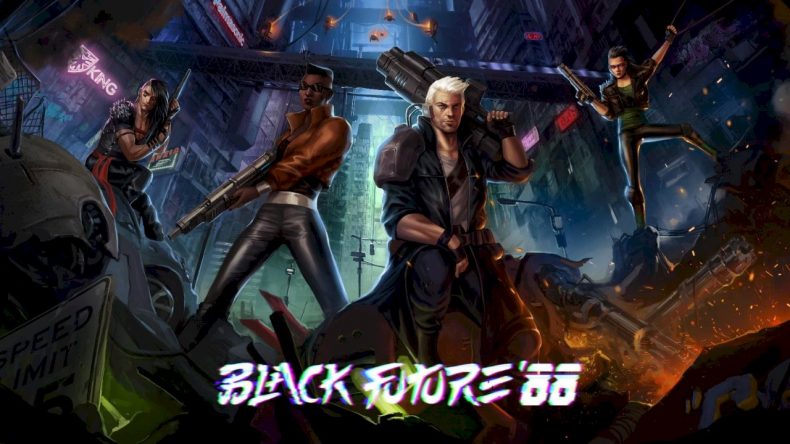 You can accomplish quite a lot in 18 minutes. You could eat a whole large pizza, or do some H.I.I.T if you’ve over-indulged on pizza the night before; you could watch a couple of back-to-back reviews (seriously, there are worse ways to spend 18 minutes) – but in the bleak world of Black Future ’88, 18 minutes is all the time you have so you’d better spend it wisely. And by “wisely”, I mean savagely and brutally cleaving your way through an army of robots, cyborgs and cyberpunks to reach the top of Skymelt Tower.

I wish I understood the plot of Black Future ’88 beyond the initial premise, but I sadly do not. As far as I can tell, the human race stopped counting the years after a nuclear attack in 1988, and now exist in a neon dystopia in the thrall of Skymelt Tower, a massive, overbearing AI. The motley little grab-bag of mercenaries from which you select your character have 18 minutes to live, 18 minutes to reach the top of the Tower before their hearts explode, and thus you have 18 minutes every time you start to get as far as you can on one life. Like in Dead Cells, every time you die you get dropped back at the start with everything you’ve picked up taken away, but XP levels you’ve earned remain, each one unlocking a new perk, buff, or weapon that you’ll now be able to find as a random drop in Skymelt. You can jump, double-jump, dodge, shoot and ground slam, and that’s your lot – but there are so any weapons and different buffs that you’ll never have the same run twice, especially as the Tower is procedurally generated, too.

Buffs come in many forms from a double dodge move or more i-frames during each dodge, to a faster rate of fire, or the ability to damage your attacker when you get hit. Each buff only lasts as long as the run, but they make a real difference when you unlock a few at once. Conversely, Curses act in the same way but demand a sacrifice of blood or time to unlock. For example, one Curse takes 3 minutes off your time but increases your damage and defence, allowing you to potentially advance faster despite losing a chunk of your span.

Some outlandish weaponry compliments the world perfectly, such as a gun that converts your collected money into ammunition, or a laser gun that teleports you to your target on a kill, which takes some getting used to but is a handy way to avoid damage when you master it. Black Future ’88 is a speed-runner’s dream, throwing you into the deep end time and again, in a world where every second counts and every mistake could completely ruin a run. There are special rooms that require you to activate an alarm summoning in a bunch of enemies for a handsome pay-off when you’ve cleared them out, and other rooms that contain teleporters, black market traders and hidden portals that transport you to a room where you can broker a handful of precious seconds for a Buff.

Money and gear that drops from enemies must be collected quickly, or it will be absorbed by the Tower and Skymelt will become stronger and tougher, spawning mini-bosses called Hunters to track you down. At all times a black skull icon on screen will tell you which direction the nearest boss is in, and taking them out rewards you with a blood and ammo refill, and increases your survivability. Not to mention that a lot of them carry special unique weapons and Buffs to bolster your arsenal. I haven’t encountered many overly-challenging bosses, but the majority will kill you if you go in low n health or ammunition, and they’re a diverse bunch, too.

That said, so are your player characters. Initially you begin with only two: Hauer, a white-haired and trench-coated homage to Blade Runner legend Rutger Hauer, and cyberpunk Seagrist. You’ll unlock three more as you level up, and each begins with different starter weapons, from pistols and shotguns to swords and laser cannons. Later you can rewire a drone sidekick to fight alongside you and take some of the threat, and unlock shortcuts to get you through the Tower that little bit faster. Everything you unlock is stored in your Code-X, a compendium of enemies and weapons you can encounter, which also acts as a kind of checklist.

The pixel art aesthetic of Black Future ’88 has become fairly pervasive in the last few years, but it still looks fantastic. The arenas are bathed in black and neon, a garish lightshow to reflect the cyberpunk stylings of its retro-futuristic world. It’s a grim universe, for sure, but its bright colours and relentlessly likeable soundtrack offer a welcome counterbalance.

With titles like Dead Cells, Blasphemous, Dark Devotion, Bloodstained, and Slain, we’ve no shortage of challenging side-scrollers to get into these days, but Black Future is more than worthy of your time and does more than enough to stand out in an increasingly populated crowd.

Not much of a story
Could do with more location variety

Even with no shortage of challenging side-scrollers to get into these days, Black Future '88 is more than worthy of your time and does more than enough to stand out in an increasingly populated crowd

You may also like
Black Future 88Good shepherd entertainment

Black Future 88 has a solid foundation, but needs refining to stand out from the roguelike crowd