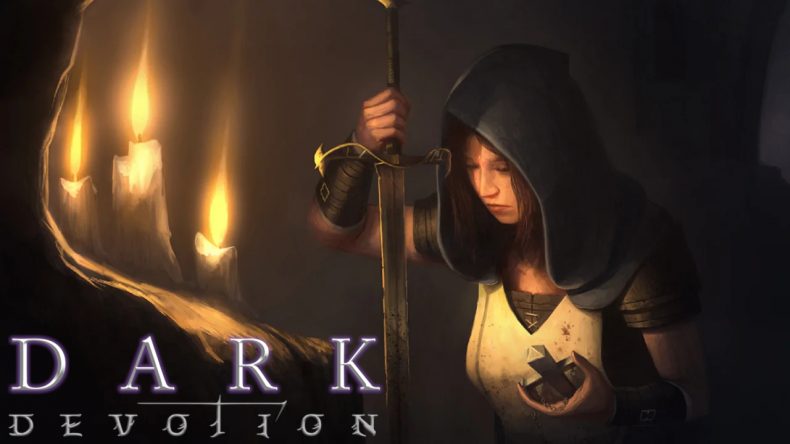 Dark Devotion really wants people to know it’s hard. It wants people to talk about it in hushed whispers in the same breath as Dead Cells or Salt & Sanctuary. And it probably will be, to be fair, but there’s such a thing as over-egging the pudding. Not that Dark Devotion is “too hard”; rather it seems determined to frustrate as much as challenge.

This is made fairly evident in its almost stubborn lack of exposition. Your character is a templar, a holy warrior who has made a pilgrimage to an ancient temple and is determined to face its challenges head-on. Which sounds pretty cool, until you realise that this is all the back story you’re getting from the intro. Beyond that you’ll need to pluck nuggets of meaning from the lofty, baroque ramblings of the various NPCs in the temple sanctuary or glean what you can from flavour text in items, which itself is incredibly sparse on detail.

It adds up to a game that is what it is because it is. Dead Cells is tight on story, but the premise and world are much simpler there. Dark Devotion feels like it should be deep, like it should have reems of lore somewhere, but unfortunately it feels more like its world was hastily constructed around the design of the central protagonist who, as cool as she is, is pretty one-dimensional. There’s nothing to drive you on, and it’s hard to care why she’s there or what she’s doing when even the NPCs seem utterly disinterested. Quest details are also annoyingly thin, which when combined with a map that seems so unreadable it might as well not be there, makes for a game that feels determined to obfuscate rather than issue a straight up challenge. That said, the core gameplay is enough to make you forgive these shortcomings. For the most part. It takes a while to get used to the control scheme which has three different buttons to perform an edade roll, and you can both duck by pressing down and kneel to pray by pressing X, which are essentially the same thing only the latter spends your accumulated Faith to open doors, heal you, and cure diseases. Attack is on the right trigger while block is on the left, and you press B to switch weapons. It feels a bit weird at first, and until you’ve leveled up some the Templar’s slow attacks don’t help it feel any smoother, but it opens up the more you play.

Going in almost utterly blind I at first assumed Dark Devotion was another Soulslike, when in fact aside it borrowing heavily from that genre in terms of atmosphere, it’s more of a Metroidvania. Death sends you back to the Sanctuary, removes your gear and respawns enemies, including bosses if you don’t have a specific item on your person. But you keep your accumulated experience to spend on upgrades along with any skills and upgrades you already have. Also, some weapons and items unlock starter gear you get from the blacksmith, which feels somewhat like Dead Cells’ method of finding blueprints only more straightforward. Oddly, you don’t spend Faith on upgrades. Instead you’ll accumulate a different currency to spend whenever you die or return to Sanctuary. One thing I feel Dark Devotion gets right is the character progression, whereby each upgrade incrementally improves your efficiency in ways that feel more impactful than you expect. A 2% increase to stamina regen seems super small, but coupled with a more efficient evade, makes a big difference in a fight – and you’ll need every advantage.

The Templar’s health is represented by a line of red orbs, of which there are initially only two, protected by armour. Essentially that means you have three hits in you before you’re dead. Enemies have attacks and tells, but they don’t tend to observe patterns and can throw random attacks at you that can be difficult to pre-empt. Environmental dangers like spikes, traps and spinning axes also add to the danger, compounded by the fact that the game is incredibly dark, to the point where you can barely see in front of you. It’s intentional and can be countered with torches and spells, but that often requires a concession that makes the game even harder. Gear comes regularly, with some of the best stuff dropping from bosses and being added to your blacksmith’s pool of loot. You can switch between two weapon sets, and change armour, relic and runes, the latter two of which grant various buffs to skills, stats and abilities. Consumables, too, come in many forms from health poultices to bombs, but you can only ever have four equipped and there is no inventory to carry spares or extras, so you will certainly have to make sacrifices for specific items.

What Dark Devotion lacks, or omits, in terms of plot, it more or less recoups in atmosphere. It looks gorgeous, especially on the Switch’s screen, with a pixel art style that’s so pervasive these days it’s not even right to call it “retro” anymore. The darkness is oppressive and threatening, and the enemy design is pretty interesting, especially the bosses. In fact, some of Dark Devotion’s bosses, while not as comparatively challenging as those seen in other similar games, are great fun to fight and require some thought and observation to overcome.

If you’re looking for a new challenge to test your reflexes and patience, then despite some frustrating design choices and an annoyingly obtuse story, Dark Devotion offers atmosphere in spades and a great Metroidvania-style adventure to sink your time into.

Dark Devotion is an atmospheric action RPG that emphasises exploration and survival, but it's let down by its frustrating obtuseness